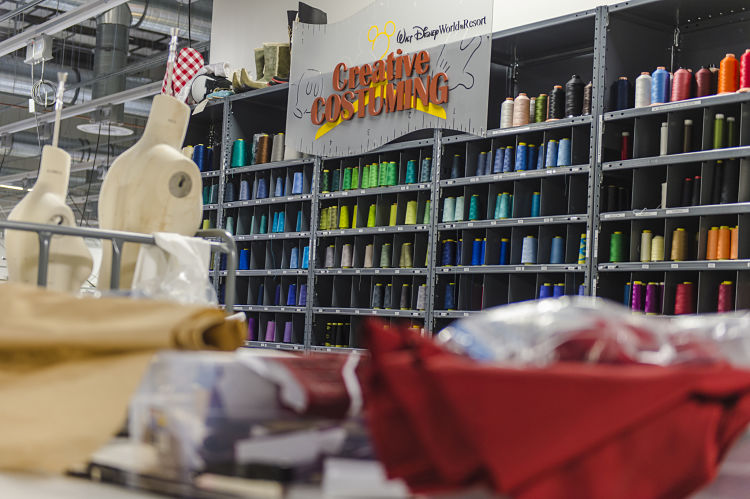 Wow! I just pulled out my laptop after an amazing day at Walt Disney World, after I just experienced the Backstage Magic Tour! This 7-hour tour is a special ticketed event for $275.00 per person that guests over 12-years-old have the benefit of experiencing. During the tour you’ll see a close up look at the incredible engineering of The American Adventure, the Creative Costuming building, the Central Shops (maintenance) building, one of the Textile Services (laundry) buildings, the utilidor system, and you enjoy a delicious lunch at Whispering Canyon Café.

You may have a little bit of sticker shock seeing $275.00, but what I will tell you is that if you have the money, and you’re a huge Disney parks fan, then I think it is well worth it. Here are 5 reasons why I believe so: 5) See How the Magic is Made

There are so many people that keep away from this tour believing that if they saw how the magic was made, it would ruin the entire experience for them. While that may be true for some people, I had the complete opposite experience. When I see how impressive the entire organization is, it gives me a better understanding of the inner workings which, in turn, gives me such an appreciation for what Walt Disney World accomplishes every single day.

4) Walking Under the Magic Kingdom in the Utilidor System

The Utilidor System underneath the Magic Kingdom has taken on a life of its own. The utilidors are short for utility corridors, and ever since the Magic Kingdom opened in 1971 guests have been inquisitive to know more about these tunnels that run under the park. On the Backstage Magic tour you walk around these tunnels seeing cast members walking to and from work, utility vehicles maneuvering around, and so much more! On a personal level, I was incredibly excited to return to the utilidors as I hadn’t been down there for 5 years, since I worked as a cast member in Tomorrowland during my college program. The utilidors were the place I first met my wife on our first day of work together in the Mouseketeria (the cast member’s cafeteria). While this isn’t a guarantee, there is a chance that you’ll see something on your tour that will be coming to the Disney parks in the near future! In the Creative Costuming building, there are some costumes that can take Disney over a year to create, and if you’re in luck you might just see one of those costumes being created. Our tour guide even mentioned that she was lucky enough to glance at the Sven audio animatronic featured in Frozen Ever After before the attraction was even open in the Central Shops building. Again, this isn’t anything that is a guarantee, but it is cool to know you are surrounded by the past, present, and future of the Walt Disney World parks during certain parts of this tour.

While it isn’t a prerequisite, I would highly recommend this tour to any guests that consider themselves Walt Disney World veterans. If you think you know the parks inside out and backwards, then seeing the parks from a viewpoint that you’ve never had before might blow your mind. You’ll learn new things along the way, and you’ll have an even better picture of the entire park around you. This stop on the Backstage Magic Tour could be a tour in its own right. Before I went on the Backstage Magic tour today, I did a little research just to get a better idea of what I was walking into. To be completely honest, the Central Shops Building wasn’t something I really thought was going to be all that interesting. Boy, was I wrong! This is not only the place where all ride vehicles are serviced, it is also where they create all the audio-animatronics, where they paint all the ride vehicles, and so much more. This is the type of place any Disney parks nerd would want to spend hours exploring. One little detail I loved during the tour was watching a cast member polishing C-3PO. It was so random, and it made me realize how cool a place like this was. It was like walking into …Walt Disney’s workshop.

The entire tour was so fascinating. Like I stated above, the Central Shops Building and the Utilidor System were incredibly amazing to see. While those two were my personal favorite stops on the tour, everyone seemed to have their own favorites. While the Textile Service building and the Creative Costuming building were only somewhat interesting to me, others seemed to be blown away. Basically, my point is that there is something for everyone on this tour!

Disney wonderfully provided me with these amazing pictures, but if you are wondering why this article lacks pictures of the Utilidor System, or other pictures of the backstage area, well that is because some of the magic is kept a secret, unless you too want to go on this tour!