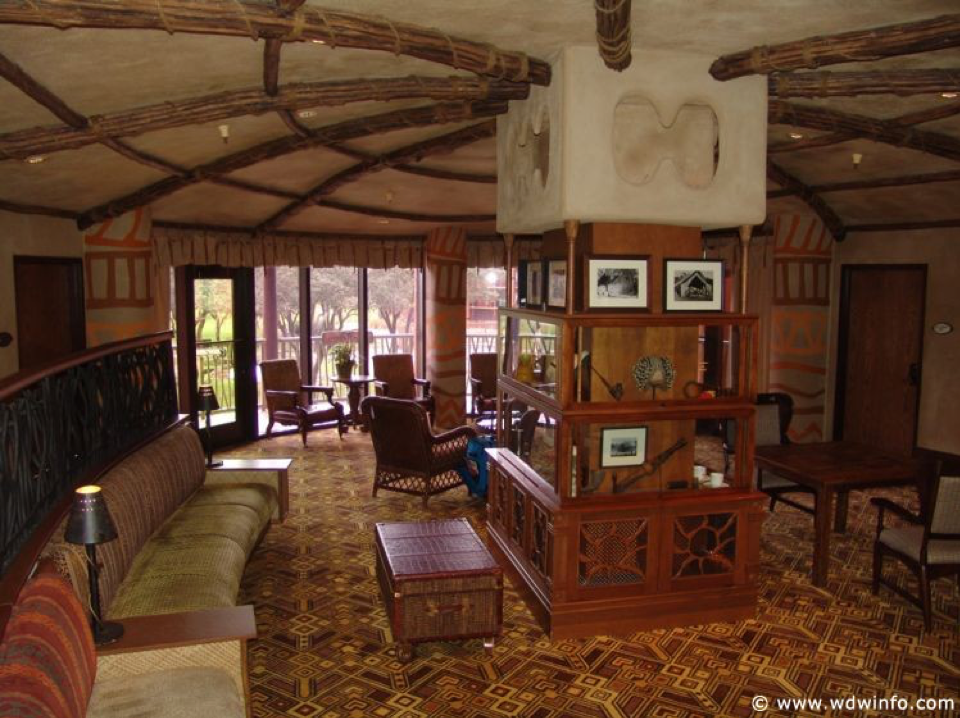 The Sunset Overlook Lounge located at Animal Kingdom Lodge’s Jambo House is one of my favorite places on property. It is designed to transport guests to Africa, respecting both nature and human cultures. The Lodge is split into two sections: Jambo House and Kidani Village. About a ten-minute walk apart, with a convenient shuttle bus available, the resort provides constant opportunity to explore and discover. With a diverse array of wildlife, artwork, and original furniture, the Lodge is full of surprises. I have stayed there about a half dozen times and been there many more; and always see something new.

Located off of Jambo House’s majestic lobby, the Sunset Overlook Lounge is a round space to the left as one enters the main entrance past the check-in desk. The space includes comfortable seating, a few tables, a savanna right outside, and genuine objects. It is a homey and well-lit space many use to complete schoolwork while on vacation (I’ve been there!) or hop on a quick conference call. Others use it to relax while they wait for their room to be ready.

The lounge is well-cared for by resort staff. Genuine objects include period teacups, hats, binoculars, and African artwork. During the holiday season, the area includes two beautifully decorated trees adorned with ornaments consistent with the rest of the resort.

Animal Kingdom Lodge and the lounge are fantastic to visit any time of day. Visiting the resort can serve as a great spot to take a break from Animal Kingdom, or as an opportunity to explore a previously unknown area of property at dinnertime. Please be advised that at this time, parking spots are limited to those with confirmed resort stays or dining reservations, and security there is relatively strict. I enjoy the space most in the evening or at sunset, when one can smell the meats cooking at Boma -Flavors of Africa outside, and many of the animals are especially active. Before or after a great meal at Boma or even Kidani Village’s Sanaa, the space offers a great location to sit and relax.

Right outside is the Sunset Savanna, which is the space between Kidani Village and Jambo House. One of four savannas at the Lodge, guests generally agree it has the most active and diverse residents. Giraffe, impalas, gazelles, stork, African crown cranes, ostrich, zebra, and more all live here. Outside of the lounge, I most often see ostrich, Ankole cattle, and an occasional giraffe. Many years ago when completing school work in the afternoons, stepping outside and seeing what animals may be present was always a special treat. This is the same savanna one sees when they are on the outlook outside of Kidani Village’s lobby.

When one thinks of classic Adventureland and the adventurer-explorers of the mid-twentieth century, Martin and Osa Johnson fit the mold. The married couple were filmmakers who created movies showing genuine images of African, Asian, and Pacific peoples and wildlife to audiences around the world. Martin (1884-1937) began touring and lecturing about his South Pacific travels in the late 00’s and married Osa (1894-1953), whom he met while in Kansas, in 1910. Movies like Simba (1928) and Congorilla (1932) brought images of faraway lands to audiences who may have never seen images of these places before. Today, the films of Martin and Osa Johnson transport the viewer to deep jungles and dangerous savannas; full of sights impressive decades later.

At the Sunset Overlook Lounge one can see the largest ongoing exhibit of photos from the Johnson’s African expeditions (outside of their hometown museum). When the concept of what became Animal Kingdom Lodge was in its early stages in 1997 and 1998, the architects and team from Disney borrowed films from the Martin and Osa Johnson Safari Museum in Chanute, Kansas. Showing natural landscapes, wildlife, and human accommodations provided a unique lens into Africa of the past.

Upon the Lodge’s opening in April 16th, 2001, the lounge included 36 photographs provided by the museum and an original copy of Osa Johnson’s book I Married Adventure. The photographs are from all five of the couples extended African exhibitions. These items remain there today! The Facebook page of the Martin and Osa Johnson Safari Museum shares fantastic images of the couples travels which should please any fan of Adventureland and various areas of Animal Kingdom (especially Africa).

This area is a favorite space of mine on property. Typically, quiet but near a large lobby, it is a great place to study or take a general break from an otherwise bustling vacation destination. A quick bus ride from Animal Kingdom, it is a solid place to recharge from a day in the parks, or for an exciting evening to come. With attention given to every detail, the lounge and Lodge as a whole showcase Imagineering at its absolute best.

In a world of social media and pervasive technology, it can often feel like surprises and secrets are extinct species at Walt Disney World. But one remains for now; that is the time capsule once located at the Sunset Overlook Lounge. A time capsule in the form of a trunk once existed to the far right (facing the savanna) in a ground level cabinet. The placard above the trunk states:

We, the original Cast of Disney’s Animal Kingdom, take pride in our contributions to this unique Resort. Enclosed in this capsule, to be unearthed on April 16, 2021, are mementos of the creation and opening of a resort new in concept and design, dedicated to the celebration of the earth, its animals, and the spirit of Africa.

April 16th, 2021 was Animal Kingdom Lodge’s twentieth anniversary. Plans to open the capsule appears to have been delayed due to the pandemic and I first noticed the trunk’s absence in November 2021. I wonder what is kept inside or what the current plans are?

Is the Sunset Overlook Lounge a space you enjoy? What objects do you think may be in the capsule? What are some other nooks and crannies of property which are a favorite of yours? Please feel free to leave a comment!