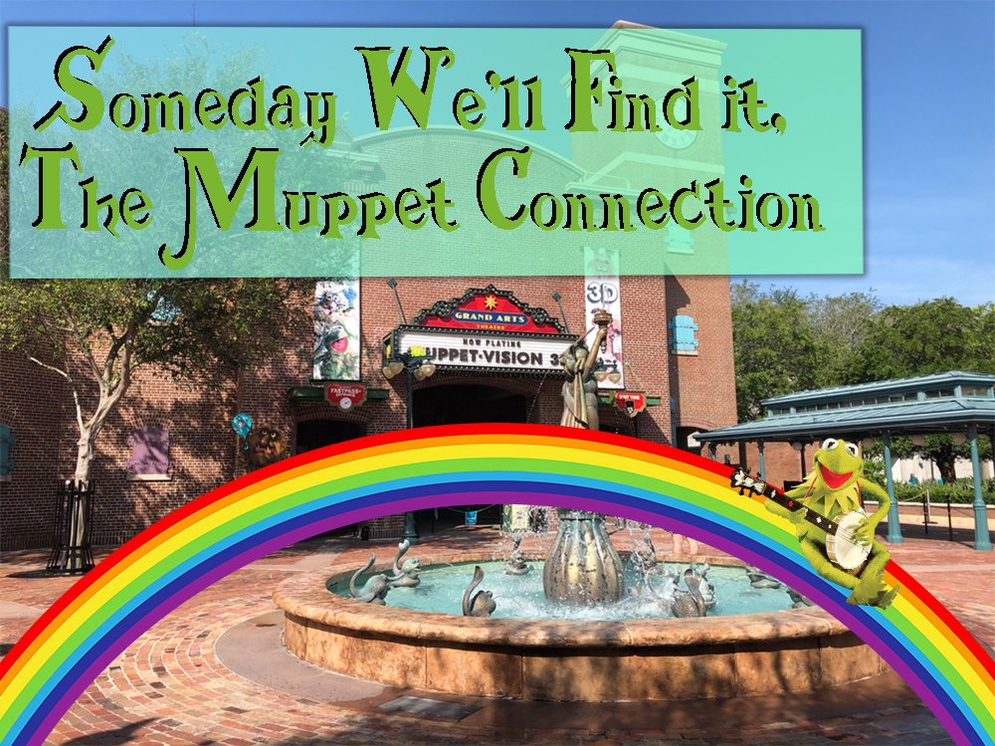 The Lovers, the Dreamers, and Disney…

The Muppets and Disney have me confused. There is a disconnect between the two, and there has been since the early 2000’s. The Muppets suffer an identity crisis within The Walt Disney Company and it shows in their confusing presence in the parks and on Disney+. Will we find the connection between them? Maybe someday, because The Muppets could be Disney’s beautiful rainbow if they just gave them a home.

Moving forward from 2020 and getting back on track with our Disney lives, I think it’s time to again reassess the Muppets’ connection. They lack a home, they are scattered, and they come and go at random. You can’t find them when you want them, and when you have them, you don’t want them because they are misplaced and represented with poor quality. They are roaming nomads searching for people to love them and for a permanent Disney space. They need to be included in the family in a more stable, consistent Disney environment.

Disney committed to a partnership, a relationship, and now they must decide after years of courting them: are we in this match together or are we breaking up in 2021 and beyond?

Recently, Disney attempted more experiences with The Muppets at Walt Disney World, (The Muppets Present Great Moments in American History in the Magic Kingdom and Muppet Mobile Lab in Epcot), but those have been discontinued.

Since then, more Muppet sightings have come and gone. Disney announced The Haunted Mansion on Halloween Night for Disney+ subscribers (coming 2021) and they have also given access to old shows that are now posted with parental advisory warnings. Gonzo and Pepe have a new PSA for vaccine promotions and Muppets Now (their latest one-season show) will debut this summer also on Disney+. This new series came and went, and Kermit’s voice is also relatively new (with Matt Vogel), so the inconsistencies are frequent and confusing.

I am not encouraged by any new programming because their shows do not attract families or young children. I understand The Muppets were created for adults in mind, however, they appeal now only to those nostalgic for Muppets memories of the past. Placing them in the Disney parks, they need to expand to a younger audience. If Disney does not offer The Muppets both high quality and a high level of commitment in order to expand the audience viewership, then it’s time for it to go to Muppet television heaven.

Another show with a limited target audience won’t be enough. Children do not want to see interview-based shows; programs with celebrities they do not know or identify with (and are boring), and guess what? Adults really don’t either, and that is why they continue to struggle. “They” (meaning everyone) want great songs, and stories, and well-developed characters they can identify with in 2021 and beyond.

If Disney chooses to move forward and invest in The Muppets, they must evolve them. The Grand Arts Theater in Hollywood Studios is so old and outdated it’s pitiful to not give them the love they need to turn this ship around. Bring in 2021-diverse Muppets, offer us something that’s actually interesting for young children to help recruit a new audience. Place The Muppets in an area with an identity, like a dining experience that is worthy of character interaction. Create a scavenger hunt in that area similar to Epcot’s past modernized scavenger hunts (Kim Possible or Agent P) and introduce young children so that they can get to know them. We played the Midship Detective Agency on the Disney Fantasy and it was wonderful fun! Bring that to the parks.

Now is the time to revamp a resort to include refreshed Muppets-appropriate hijinks and humor. Perhaps this resort could be the Boardwalk Inn Resort re-themed to include Muppets stories and creativity throughout the resort and around the Boardwalk area, similar to what Disneyland did at Pixar Pier. Game prizes could consist of Muppets merchandise. Or place them in the Animal Kingdom where a revamp of DinoLand U.S.A. is needed.

If Disney continues to create Muppets sightings in scattered areas, they will continue to be homeless. Their house may be Disney, but the House of Mouse has not been their home. Open the door and let them inside. There’s room for everyone.

Where or how would you like to see The Muppets featured in the future at Walt Disney World?