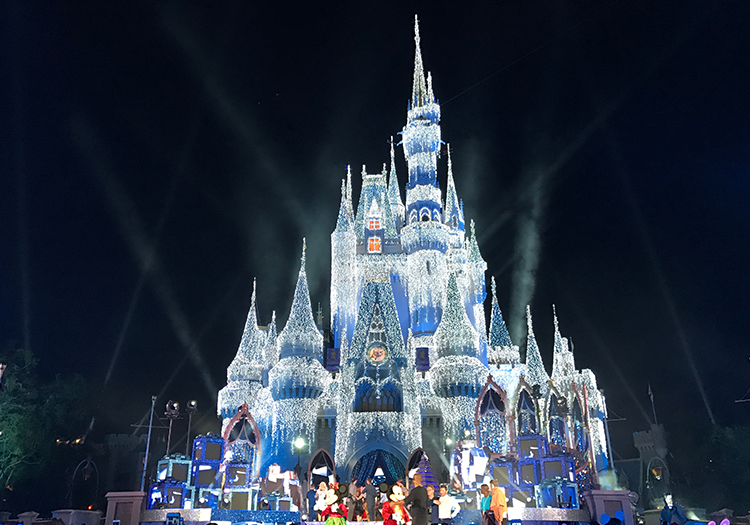 ShareTweetSubscribe
There is a ton of work that goes into making Disney magic, and one of the places that this is most evident is during the production of a television special in a Disney park. For some guests, seeing how the magic is made can ruin the experience, but for many, including myself, it is an opportunity to appreciate the hard work that Disney puts into creating such a magical experience. I recently had the opportunity to watch the filming of both “The Wonderful World of Disney: Magic Holiday Celebration,”, which will air on November 30th from 9 pm to 11 pm, and “The Disney Parks Magical Christmas Celebration,” which airs Christmas morning on Monday, December 25th from 10 am to 12 pm. This was my first experience at a live taping from Walt Disney World, and it was amazing to witness the effort that has been put forward by the performers, the camera crew, the director, and even the hype man (I’ll get to him later). Being in the crowd for one of these productions is fascinating, to say the least. I naively thought that being in the crowd would be similar to what viewers on television see at home. Boy, was I wrong. These are massive productions that take a long time. A 2-minute segment on television can take an hour or two of microphone tests, special effects tests, re-shoots, makeup touch ups, and a lot of waiting around in between. These productions always seem together, but it is grueling work for the cast and crew. While it was well worth it, I will say that even standing in the audience was difficult at times, as you are on your feet, sweating, and dancing/clapping on cue. I went to two different productions. One was on Sunday, November 5, and the other was on November 7. The first production was at night for Nick Lachey and Julianne Hough’s opening number for the “The Wonderful World of Disney: Magic Holiday Celebration,” which kicks off Freeform's 25 Days of Christmas! I would highly recommend nighttime events if you are interested in attending one of these filmings in the future. Not only are the nighttime events less sweaty, they are also more energetic! Nick Lachey and Julianne Hough kept the crowd engaged, and they even posed for pictures on stage after they were done. I attended my next production day on November 7. This was another amazing experience, but it did involve battling the heat and humidity of a Florida afternoon. This production was for “The Disney Parks Magical Christmas Celebration,” so look out for the back of my head on Christmas morning! Both Fifth Harmony and Ciara performed, and I was stunned with how well the entire cast, crew, and performers kept it together in the heat. That being said, I did notice that the crowd had a harder time being engaged in the performance after waiting out in the sun, compared to the nighttime performances. While I am not the biggest Fifth Harmony or Ciara fan, I could appreciate their talent and ability to perform in such warm conditions. The hype man was a staple of both productions. I doubt that this is his official title, but for the purpose of this article that is what I am going to call him. The hype man’s job was to keep the crowd animated, happy, and entertained between performances. He kept the audience informed on what is going on, if there were any delays, and when the performers were about to hit the stage. I will say that this is probably a harder job than it looks, because after an hour or two of waiting people get restless. If the crowd seems disinterested because they have low energy levels headed into the performance, that isn’t going to come across great on television, and at the end of the day that would all come back on this guy. Walking into this experience I really hadn't thought of him. Also, excuse the fact that I don't have a picture of this guy. I totally forgot to get a picture of him. The actual production team was massive. Cameramen, makeup artists, stage managers, the director, and so many others came together to make magic. Yes, I know that sounds cheesy, but it really is true. Witnessing this production really is incredible, because you watch as Disney takes a million moving parts and puts them together into something that will surely be incredible.
ShareTweetSubscribe