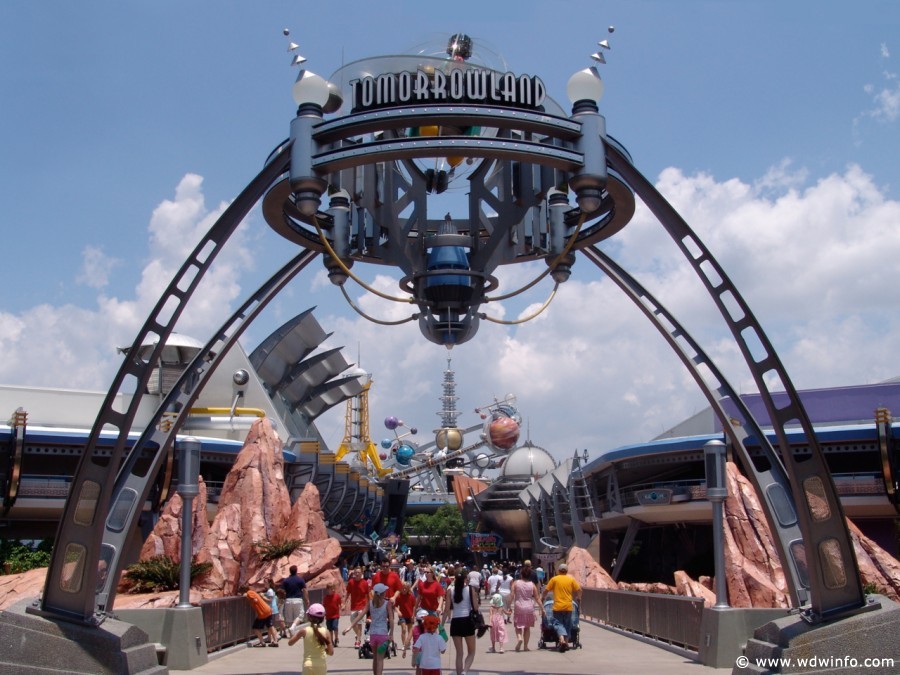 ShareTweetSubscribe
"To the youngsters of today, I say believe in the future, the world is getting better. There is still plenty of opportunity. Why, would you believe it, when I was a kid I thought it was already too late for me to make good at anything." - Walt Disney Walt Disney was an optimist. He believed science and technology would offer new frontiers and opportunities leading to a peaceful, unified world. His optimism defined a generation and was the philosophy behind Tomorrowland at Disneyland. Guests visiting Tomorrowland would become excited over a gleaming realm that provided a glimpse of the promising future just a few decades away. Michael and Craig in front of two of their favorite Tomorrowland attractions. Like Disneyland's Tomorrowland, which almost didn't open in time for that park's debut, the launch of the Magic Kingdom's Tomorrowland was slow with only two attractions on opening day - the Skyway and the Grand Prix Raceway (Tomorrowland Speedway). By the end of the year, Flight to the Moon and the Circle-Vision 360 theatre featuring the film America the Beautiful were added, but it would be another four years until the rest of the planned attractions were running. If You Had Wings, Star Jets, Carousel of Progress, WEDWay People Mover, and Space Mountain were transporting guests to new adventures by the end of 1975. From the Skyway, which was a gondola tramway between Tomorrowland and Fantasyland, guests were treated to a bird’s-eye view of the Magic Kingdom. This version of the Skyway was unique from Disneyland’s in that it did not travel in a straight line over the park. Midway through the journey, the gondolas descended to an L-shaped turn before ascending again and traveling on towards their station. Frequently, a cast member was positioned at the turn to help guide the gondolas through the turn. The Skyway closed on November 9, 1999, exactly five years after the Disneyland version closed. With the re-imagining of Tomorrowland into its current retro-future design, Walt Disney Imagineering updated the Circle-Vision 360 experience and transformed the attraction into the Transportarium. The attraction was changed to Tomorrowland Metropolis Science Center, a few months later, to maintain the thematic continuity of New Tomorrowland 1995. The updated attraction, also known as Timekeeper, included a full storyline, pre-show, and host characters. Robin Williams voiced the Timekeeper animatronic host and Rhea Perlman voiced Nine-Eyes, the time-traveling robot which brought the images into the theater. Jeremy Irons appeared as H.G. Wells in the film. Timekeeper was the first Circle-Vision 360 film to incorporate CGI effects and a complete storyline. Timekeeper closed in 2006 and ended the era of Circle-Vision 360 films in the Magic Kingdom. Today, Monsters Inc. Laugh Floor, an interactive attraction based on the Monsters Inc. films, collects guests’ laughter instead of screams to power Monstropolis. In 1994, the Star Jets closed as part of New Tomorrowland and re-opened as the Astro Orbiter. The central rocket was removed and the shuttles replaced with more futuristic individual rockets with an iron-work tower replacing the center rocket. Multi-colored planets were added on the outside of the attraction making it look as if the rockets were flying in between the planets. Flight to the Moon embarked on a new mission to Mars in 1975 until it ended its space program in 1993. ExtraTERRORestrial Alien Encounter took over as part of the Magic Kingdom's New Tomorrowland on June 20, 1995. This attraction terrified both children and adults and in a controversial decision, it was closed in 2003 to be replaced by Stitch's Great Escape!, which opened in 2004 re-using many of the elements from ExtraTERRORestrial Alien Encounter in a more family-friendly encounter. If You Had Wings took guests on a 4 1/2 minute journey from the Magic Kingdom to exotic locales around the world. As the attraction sponsors changed, so did the name of the attraction and its exotic destinations. If You Had Wings was replaced by If You Could Fly in 1989, and then became Delta Dreamflight in 1989. In 1996, the attraction lost its sponsorship and became Disney's Take Flight before ending its journey in January 1998. Buzz Lightyear's Space Ranger Spin replaced the attraction in November 1998.

Since this is Tomorrowland, let’s take a look at the future of this realm. Disney Parks and Resorts Chairman Bob Chapek announced at the D23 Expo in Anaheim, California in June 2017 that the popular Tron Lightcycle Power Run attraction, first opened at Shanghai Disneyland in June 2016, will be built in a new space next to Space Mountain. Tomorrowland will now house two E-Ticket roller coasters. The Tron Lightcycle Power Run is a neon-lit indoor-outdoor roller coaster. The attraction includes extensive visual effects, sudden speed boosts, immersive lighting, and reaches speeds of over 60 miles per hour. Tron Lightcycle Power Run is expected to open by 2021 in time for the 50th anniversary of Walt Disney World. After listening to our more comprehensive tour of Tomorrowland on Connecting with Walt, let us know if you believe Walt Disney's vision of the future can still be found in Tomorrowland. Is it still possible to have a land that transports us to the future, or is technology moving too quickly to allow Tomorrowland to exist as Walt Disney originally conceived? How would you re-imagine Tomorrowland? Additional images courtesy of Disney Parks.
ShareTweetSubscribe