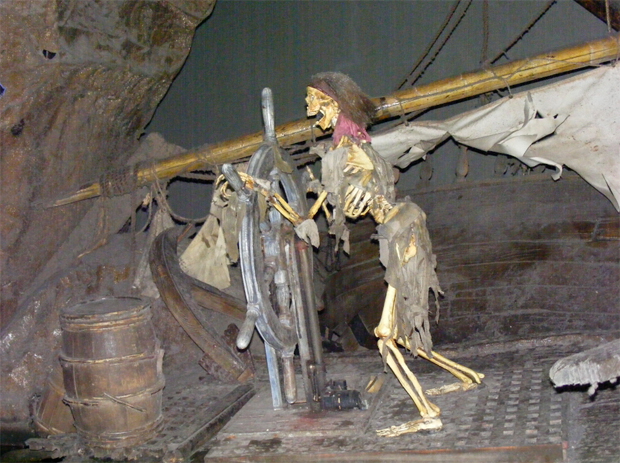 It's sad, but our favorite Buccaneers will be taking a break from pillaging and plundering this summer whilst the Pirates of the Caribbean attraction will be undergoing a much needed extensive rehab before it sets sail again in September.  Like many I will miss Pirates over the summer & it got me thinking about my first experience of the attraction. I remember the first time I rode the attraction back in July 1994, as I approached the Castillo Del Morro & entered beneath its golden arches.  As soon as I walked through the double doors, I began to feel transported into the pirate world as I walked deeper through the labyrinth of caverns & dungeons lined with the low glow of flickering lanterns & spotted the skeleton pirates hunched over a stalemate game of chess. Finally I had made it to the dock & my own boat, I was about to set sail on my own voyage. The iconic skeleton at the ship's wheel was the first thing I remember, then suddenly a quick drop with a little splash of water & before I knew it, I was trapped in a cross fire between the citadel of a port & a pirate ship.  Next we entered the port itself as its Magistrate Carlos is being dunked in the well by a pirate crew, so as to give up the location of his gold.  With just a couple of verses of "Yo ho, yo ho, a pirates life for me" and it's like our whole boat had just been inducted into the pirates league & was now full of buccaneers shouting "we wants the red head" at the auction scene & singing along to the shanty as we floated through the rest of the city.  The ride finally ended at the treasure room scene & we departed up a long travelling walkway back into the park (and of course a shop). This first experience of the attraction with its high level of attention to detail, theming & immersive music would cement it into being one of my favourite rides (I have also been on the Paris & California versions as well).  I have been going to Disney parks for over 20 years now, yet Pirates still seems as fresh & exciting as the first day I rode it.  Even after the release of the Pirates of the Caribbean movies, I thought Disney might spoil the ride & add too much from the movies, but I think they struck the right balance with the addition of Jack Sparrow & some of his pirate friends (although the waterfall effect can sometimes be hit & miss).  I hope this long refurbishment will be worth the wait as I know there are many elements of the attraction that at the moment aren't working & really need to be replaced or tinkered with so we can all enjoy this ride again, the way it should be. • In the early development of the attraction, it was originally meant to be a walk-through wax museum.  But with the lessons learned at the New York World's Fair, the Imagineers used elements from the Carousel of Progress/Great Moments with Mr Lincoln (animatronics) & It's a Small World (boats) to create the ride we know today.

• Pirates of the Caribbean opened on March 18, 1967 in Disneyland & was the last attraction that Walt Disney was involved with before his death (he passed away 3 months before the attraction opened).

• The ride wasn't originally going to be added to Walt Disney World, but due to the public outcry, it opened later on December 15, 1973.

• So far there are 4 Pirates of the Caribbean rides around the world in California, Florida, Tokyo & Paris (with a 5th soon to open at Shanghai).  Hong Kong Disneyland is the only Magic Kingdom not to have a pirates ride.

• Both the California & Paris version have a restaurant that overlooks the ride (Blue Bayou & Blue Lagoon).

**Pirates of the Caribbean is currently scheduled to be closed June 8-September 25, 2015.**