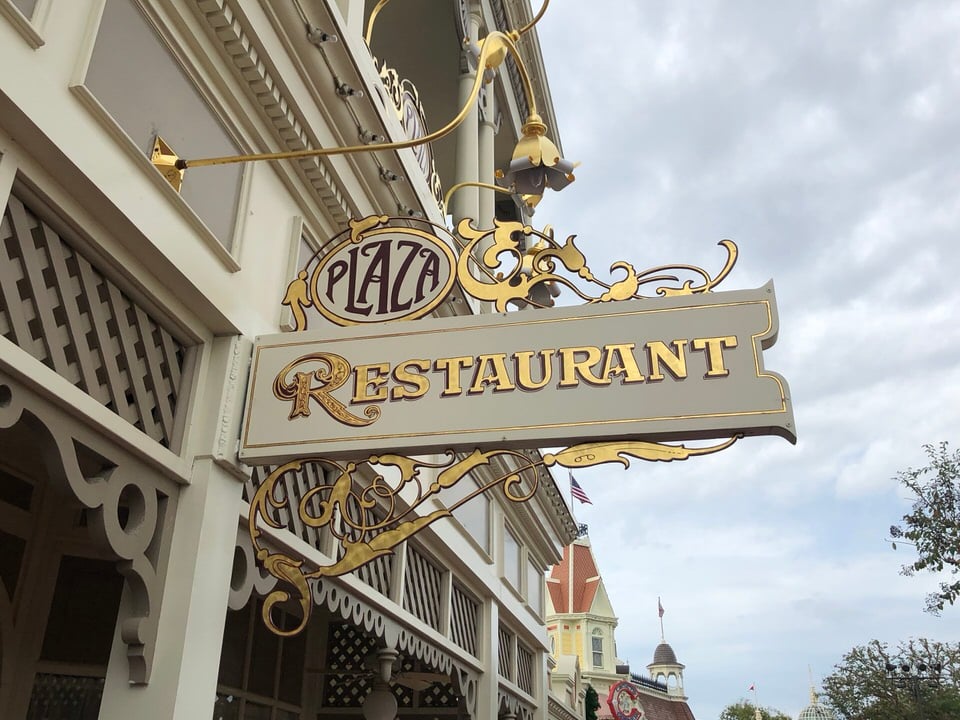 ShareTweetSubscribe
The Plaza Restaurant is considered a hidden gem by many visiting Walt Disney World. It may not be the largest restaurant in the Magic Kingdom, but The Plaza Restaurant is full of charm and you can't beat its location at the end of Main Street, U.S.A. Today, The Plaza Restaurant started its limited-time breakfast service (now through March 2nd), which starts at 7:45 AM and runs through 10:30 AM, so we made our way to Magic Kingdom to check out what they had to offer! *The DIS publishes reviews of meals that we pay for. We only utilize discounts and offers if they are available to the general public, such as annual passholder discounts and Tables in Wonderland membership. We receive no outside compensation for our dining experiences so that we may give our honest opinions about price and value. The Menu The lunch and dinner menu at The Plaza Restaurant is made up of American classics like a Home-style Meatloaf, a Fried Green Tomato Sandwich, a Grilled Rueben, and a Cheesesteak Sandwich, and the breakfast menu uses the same strategy - American cuisine made well. 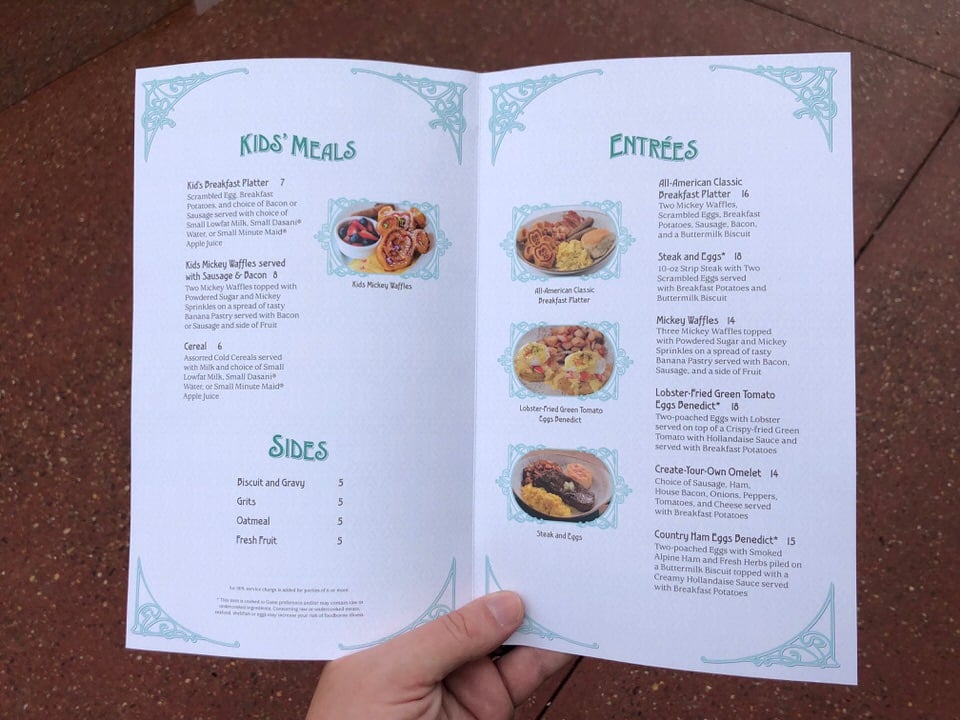 The dish that is being pushed the most by restaurant staff is the Lobster-Fried Green Tomato Eggs Benedict. The Country Ham Eggs Benedict is also one of the more interesting menu items on paper. Mickey Waffles are a standard all across Walt Disney World property, but here they are taken to the next level with sprinkles and a special garnish. Diner classics like the All-American Classic Breakfast Platter, Steak and Eggs, and Create-Your-Own Omelet round out the menu. Kids have a choice of the Kid's Breakfast Platter, Mickey Waffles, and Cereal. Sides include Biscuit and Gravy, Grits, Oatmeal, and Fresh Fruit. 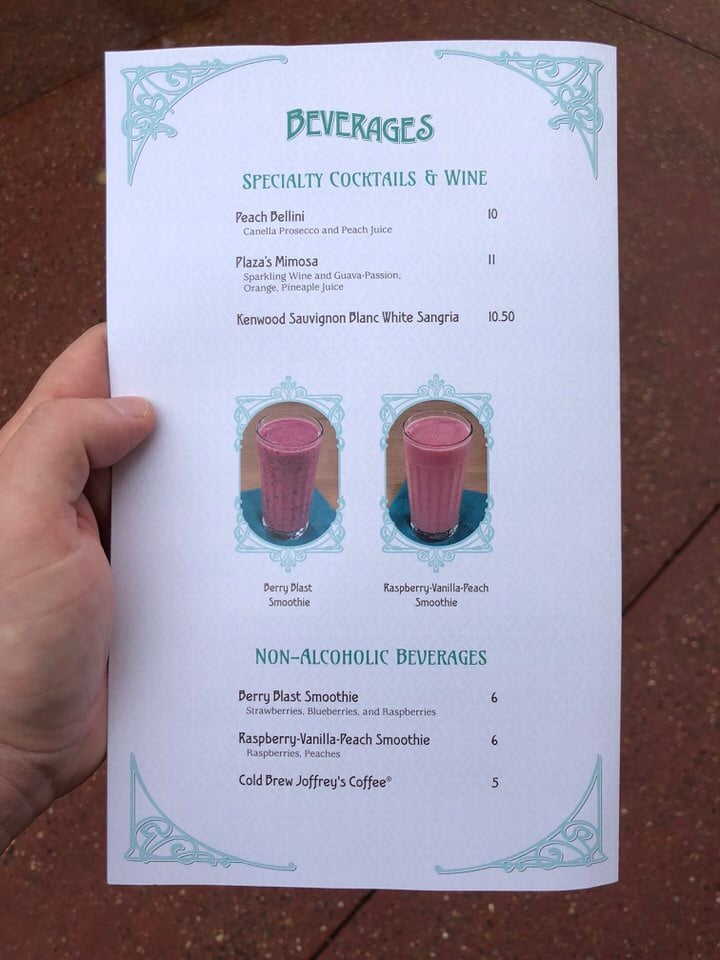 No breakfast is complete without the perfect beverage, and luckily there is a mixed selection for every taste. The specialty cocktails in the morning include a Peach Bellini, Plaza's Mimosa, and White Sangria. A Berry Blast Smoothie, Raspberry-Vanilla-Peach Smoothie, and Cold Brew Joffrey's Coffee are included under the specialty non-alcoholic beverages, and you can also have coffee, hot tea, assorted fountain beverages, or wine and beer from their lunch and dinner menu. Plaza's Mimosa - $11 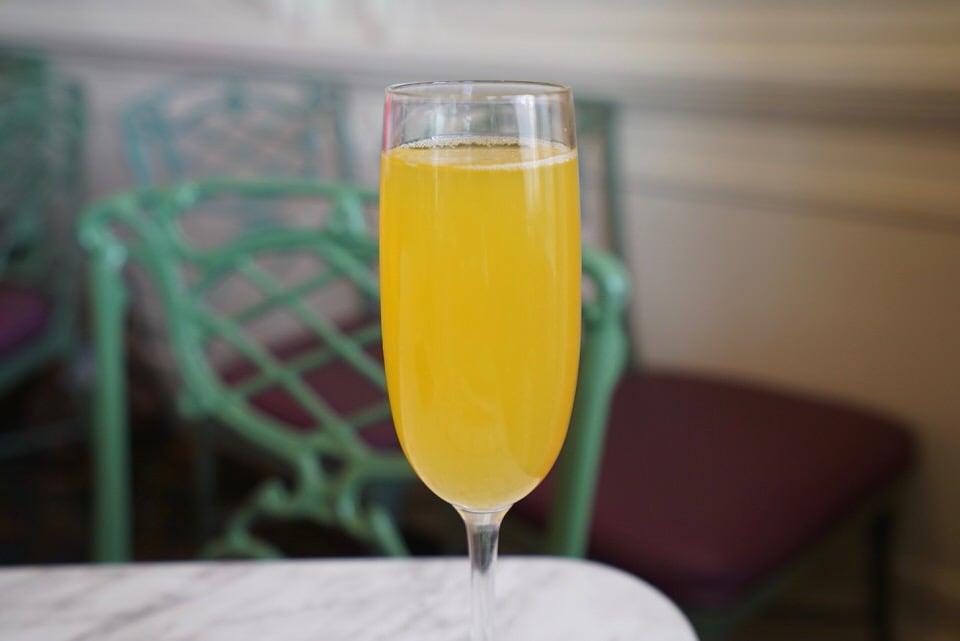 Plaza's Mimosa is the signature cocktail of The Plaza Restaurant breakfast experience, which makes sense considering it uses the name of the restaurant in its title and it will easily become a favorite for those dining here. The juice base for Plaza's Mimosa is Guava-Passion, Orange, and Pineapple Juice, better known as POG Juice, and it is mixed with sparkling wine. Mimosas are typically very sweet and this one was no different. Unfortunately for me, I don't generally care for sweet drinks, so this didn't hit the spot for my palate, but it was a very well-made drink. There wasn't an imbalance at all between the juice and sparkling wine, and the sweetness did complement some of the more savory options on the menu. Essentially, if you are a fan of mimosas then this one is worth trying despite the high price tag attached along with it. Mickey Waffles - $14 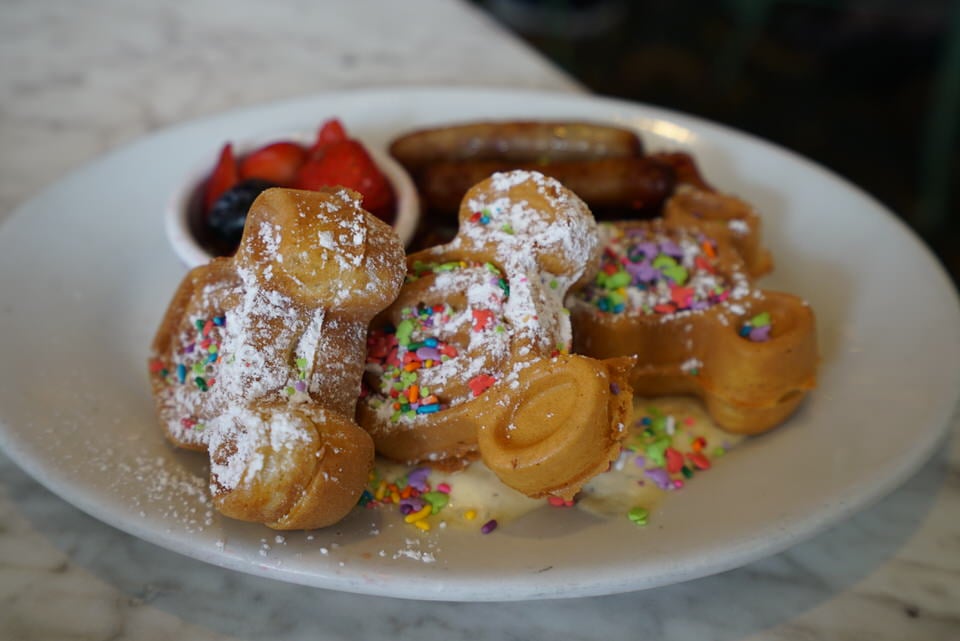 The Mickey Waffles at The Plaza Restaurant are not your average, ordinary Mickey Waffles by a long shot. The dish contains Three Mickey Waffles topped with Powdered Sugar and Mickey Sprinkles on a spread of tasty Banana Pastry served with Bacon, Sausage, and a side of Fruit. I did not sample this dish myself, but the two at my table who did had nothing, but positive things to say about it. Their highlight was the "Banana Pastry" that garnished the plate and was more like Banana Pudding. Because of its inclusion in the dish, syrup was not necessary, but still served on the side for those who want to take the sweetness to the next level. I was impressed with the fruit dish that included all berries instead of your typical fruit cup that has repulsive melon and honeydew. Two pieces of sausage links and two pieces of bacon rounded out the plate and if you've had bacon or sausage at any other Walt Disney World restaurant then you know what to expect. Steak and Eggs - $18 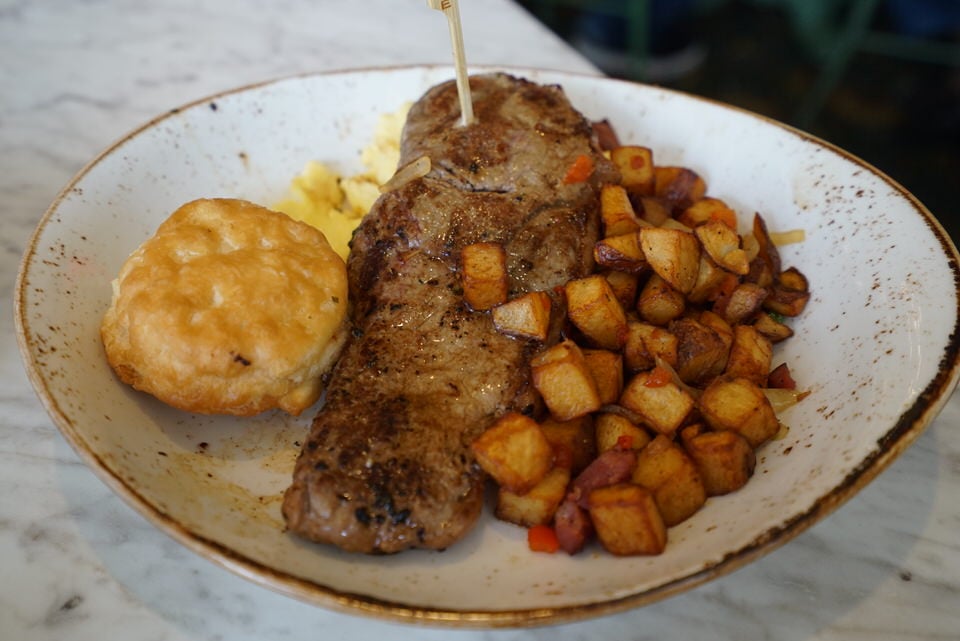 The Steak and Eggs seemed like a fun test of quality for The Plaza Restaurant breakfast. Steak and Eggs is a staple of many breakfast menus, especially diner menus, but I was particularly interested in seeing what the quality of the meat was. The plate consisted of a 10-oz Strip Steak with Two Scrambled Eggs served with Breakfast Potatoes and Buttermilk Biscuit. It didn't win any awards for appearances, but the steak was surprisingly decent. It reminded me a lot of the Strip that used to be on the Be Our Guest dinner menu before they kicked it to the curb for Filet. I ordered the steak medium-rare and it was cooked appropriately with the seasoning adding a nice crust and saltiness. The steak did have a fair amount of fat to it, but not as much as you'd expect from a Strip. The eggs and potatoes were very standard, slightly bland, and nothing to write home about, but pretty much what you expect from a Walt Disney World breakfast. Don't be afraid to add ketchup or hot sauce to them. The biscuit was light, but dense (I know that makes no sense) and had the right amount of buttery flavor. Lobster-Fried Green Tomato Eggs Benedict - $18 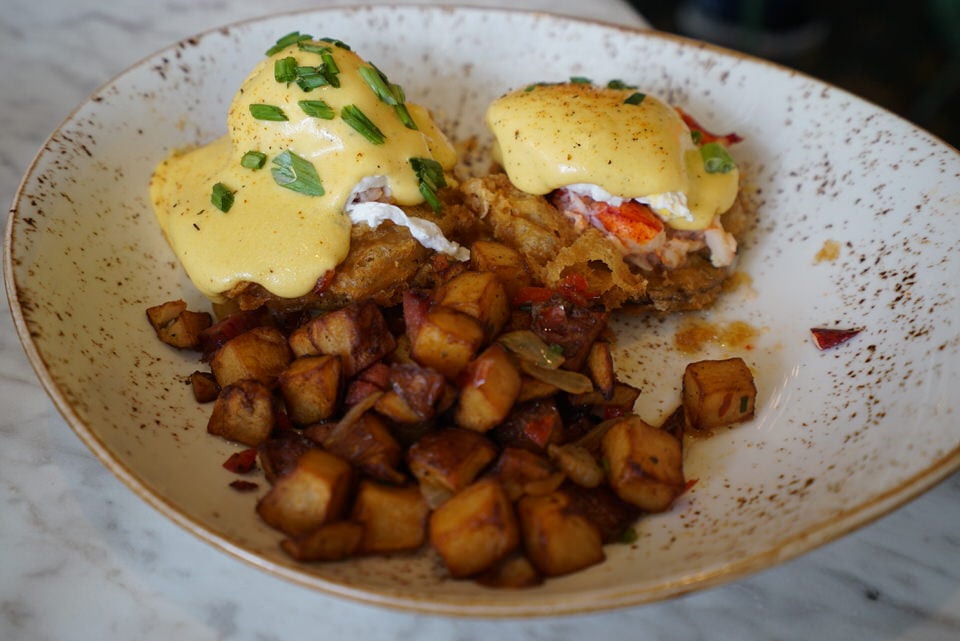 From the second we checked in at The Plaza Restaurant for breakfast, we were told about the Lobster-Fried Green Tomato Eggs Benedict, which seems to be the signature dish they are pushing for breakfast and they have every right to be doing so. The dish is Two-poached Eggs with Lobster served on top of a Crispy-fried Green Tomato with Hollandaise Sauce and served with Breakfast Potatoes and it was the best thing to touch our table. Having the Fried Green Tomatoes as a base instead of the typical English Muffin was a great move. It absorbed the egg and Hollandaise in the exact same way and added a nice crunch and saltiness. There was a generous amount of lobster in the dish and it didn't have that tough, rubbery texture that you typically have with overcooked lobster. The lobster could've easily been overpowered by the Hollandaise, but instead, they were very balanced and complemented each other. We all agreed at our table that this was the go-to choice for those having breakfast here and worth the $18 price tag. Final Thoughts The Plaza Restaurant does not have a ton of tables, which can make it difficult to get a reservation during busier times of the year, but you're going to want to try breakfast here if you're looking for a new way to start off your Magic Kingdom day. The breakfast was extremely well-cooked and the pricing was very fair for what was offered. It would be nice to see one or two more entrees to choose from or the mini-Mickey Waffles swapped out for a large Mickey Waffle, but overall, there is nothing wrong happening at The Plaza Restaurant for breakfast. If you'd prefer to watch our review, check it out below!
ShareTweetSubscribe