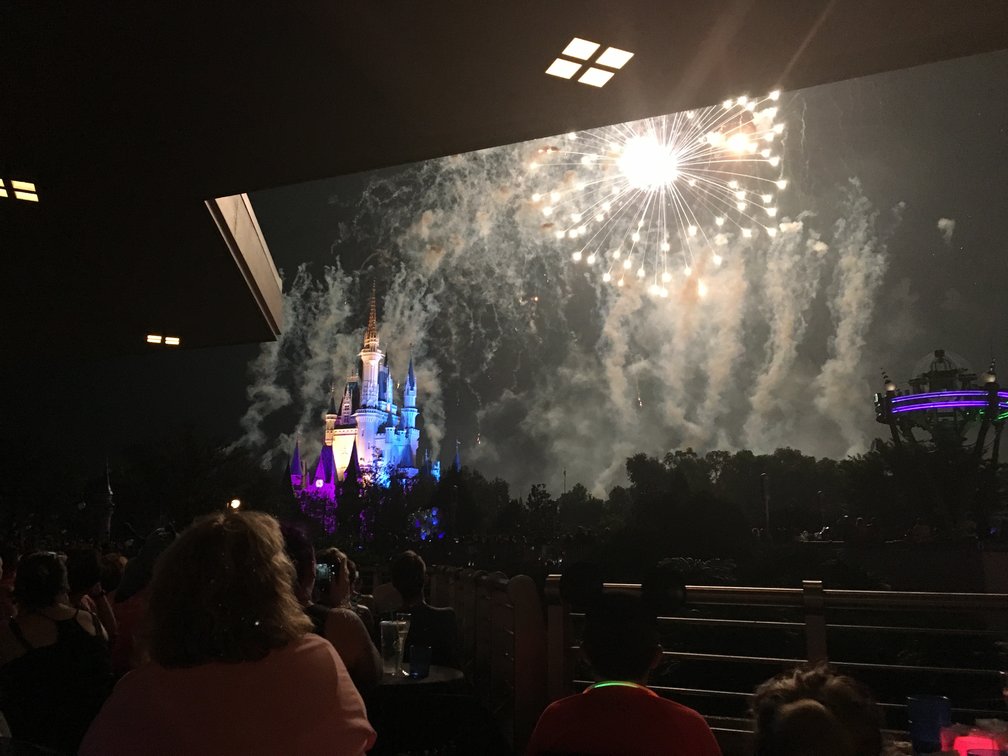 I can recall standing on Main Street U.S.A. waiting for Wishes to start. I remember thinking to myself this is not what Disney is about. It was complete chaos, from people shoving my mom to the ground so they could walk over the spot we had saved for the parade and fireworks, to a man screaming and berating a Disney Police Officer who was removing him from the park all in front of his child in a wheelchair balling his eyes out screaming and begging his father to stop because he “did not want him to go to jail.” I can remember sitting there thinking of all the better things I could be doing than standing here waiting for a show to start. Once the show starts it doesn’t get better, people still push through every available space or hold their massive tablets up obstructing your view. You end up focusing so much on the crazy mob around you, you forget about the magic. What if there was a place you could enjoy Wishes at peace, and they pampered you while you did? Well there is, it’s the Wishes Fireworks Dessert Party. There are two separate options while booking the party, you can either chose to stay at the Tomorrowland Terrace and watch the show or you can watch it in the Plaza Gardens; both options come with the dessert buffet at Tomorrowland Terrace. The cost is $77 for adults and $44 for children (age 3-9) for the Tomorrowland Terrace option. The Plaza Gardens option costs $59 for adults and $35 for children. That price may seem hefty, but for me it was worth it just to not deal with the madness and still be able to see the show, all while stuffing my face with all the dessert I could eat (and drink!). The Disney Dining Plan is not accepted for this party and you must have Park Admission to attend.

Now that the technical stuff is out of the way, let’s get into the event! They start you off at Tomorrowland Terrace, you check in and they walk you in. The host escorts you first to a table where they have sparkling apple juice for you. The apple juice is served in a champagne glass and that is the first thing they do to make you feel like a VIP. The host then walks you to your table and you are free to try the buffet. As a lover of sweets, I absolutely loved the buffet options, I tried everything and will go over them all with you about what I liked, and what I did not like.


In addition to the sparkling apple juice, there was a selection of other juices such as fruit punch or orange juice, they also had the classic milk, coffee, and vast tea selection to go with your desserts. The standout drink, though, by far, was their hot chocolate. I am from Chicago, so believe me when I say I have had my fair share of hot chocolate, I’m not lying. This hot chocolate was brewed in a special machine and it was the absolute richest drink I have ever had. It tasted like a delicious molten chocolate cake, but as a drink. It is ironic that the perfect cup of hot chocolate was served to me on a blistering hot day in Florida, but Disney perfected it. The buffet was broken into multiple parts. They had a sundae/cookie station where you could put all kinds of toppings on your ice cream and they had an assortment of cookies. I had a nice encounter with a cast member there who came up with an idea for me to go get a plate from the buffet (because she only had bowls) and she would put ice cream on top of a cookie for me, so I tried it and it was brilliant! There was also frosting and sprinkles if you wanted to just decorate your cookie. The ice cream, cookie and drink stations were kept separate from the main dessert buffet. The main dessert buffet had savory food items such as crackers and cheese and also fruits. The dessert offerings consisted of multiple snack size desserts, which was nice because it gives you an opportunity to try everything and if you wanted you could always go back for seconds (or thirds.) They had mini cannoli, a mini cupcake with Olaf on it, a strawberry pudding-like dessert which was very good (it tasted like the cream from a crème brûlée), a tiramisu pudding cup, a rice crispy treat dipped in chocolate, an Oreo with a scoop of cookies and cream pudding on top and Mickey Ears, a cocoon-looking dessert made from a chocolate cookie shell filled with frosting and topped off with a chocolate drizzle, a Tinker Bell cupcake, and a chocolate cupcake with a mousse-like chocolate chip frosting, whipped cream and a chocolate drizzle.

I enjoyed everything I had with the exception of the Tinker Bell cupcake. To me, it tasted stale and I did not finish it, it was not worth it for me, however, that was my mom’s favorite item, she said hers tasted like a Twinkie so I may have gotten a bad one. My favorite dessert was the Oreo with Mickey Ears, it was something so simple but it was so delicious. I also really enjoyed the chocolate cupcake with the chocolate chip frosting. My brother has dietary restrictions, and of course, Disney went above and beyond and prepared him a special plate so he could feel included in the buffet. His plate included two huge chocolate chip cookies, three pieces of banana bread (his favorite), four cupcakes and strawberries. He loved everything and it was great to see how happy he was to have his own plate! 
My fear was that I would not be able to see the fireworks. My fears were alleviated after the show started. I could see everything! I did not have to stand up to do it either! When we went there was no option yet to go to the Plaza Gardens, but I would definitely recommend doing that option if given the choice. You still get the buffet and then you get to be closer to the Castle in a prime spot reserved by Disney so there are no worries. It also is about $20 cheaper so I’d say that is a no-brainer. One more recommendation I could give is to get there early, the people who get there first have the best seats, and you get more time with the food!

Once the show began I had finished my food, and I sat back and watched Wishes while sipping my hot chocolate. Tinker Bell literally flew right over us to start it off. I couldn’t help but think to myself that this is how it’s done! The mood for the whole thing was just peaceful, everyone was happy and you were catered to, I can’t convey enough how much they made you feel special. Looking out at Cinderella Castle and watching the fireworks, it felt as if it was your kingdom. I was transferred back to a time of childhood innocence when I didn’t have to worry about the crowd around me because they were all having as much fun as I was. I could just sit down relax and enjoy the fireworks that I love so much.