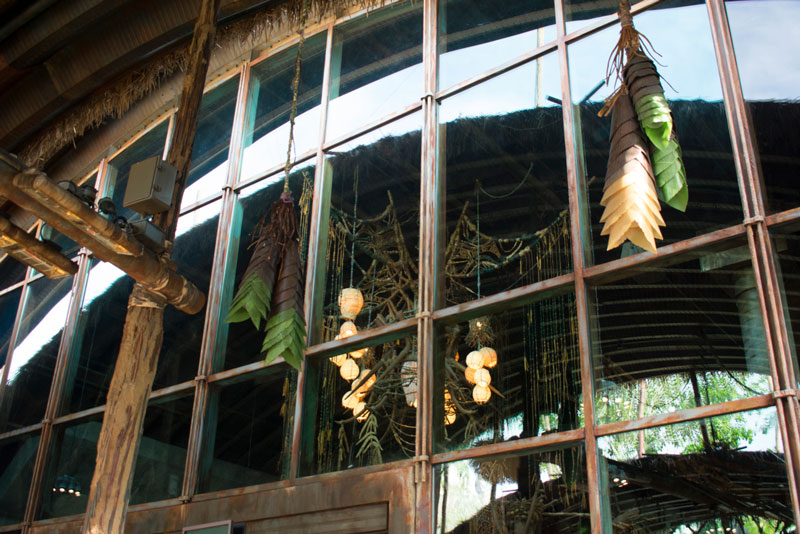 Nestled within Pandora – The World of AVATAR in Disney’s Animal Kingdom theme park, you’ll find one of the best counter service breakfast locations on Disney World property.  We were lucky enough to dine at Satu’li Canteen the weekend after the grand opening and greatly enjoyed the experience.

We arrived about a half hour after park opening for non-resort guests, having already enjoyed an extra magic hour that included a ride on Flight of Passage and the Na’vi River Journey.

We were pleasantly surprised to find the restaurant mostly empty – most likely due to the fact every man, woman and child was in line for Flight of Passage.  Satu’li was the first restaurant to roll out the mobile ordering system now offered at multiple locations throughout the theme parks.  While it wasn’t necessary on the day we visited, if you arrive and find a lengthy line, try ordering via the My Disney Experience app.  There was no line for mobile orders either time we visited the restaurant during our trip, despite the massive crowds following opening weekend.  Be mindful that as of the time this article was published, the Mobile Order feature does not allow you to use your Disney Dining Plan meal entitlements.

The rich theming you find in Pandora extends throughout Satu’li Canteen.  The restaurant is run by Alpha Centauri Expeditions (ACE) and the menu is “crafted from Pandora’s natural abundance.”  You will see references to both the RDA and ACE throughout the restaurant.

There is ample seating indoors, as well as some outdoor seating at the front entrance of the restaurant.  Similar to Be Our Guest in the Magic Kingdom, your food will be served on real dishes with silverware, despite being a quick-service location.  Unlike Be Our Guest, you will need to bring the food to the table yourself.  First World vacation problems for sure!

On the day we visited, we chose to sit outdoors.  It was early enough that it wasn’t sweltering outside and we wanted to enjoy the mild weather while we still could.

I was extremely excited to try Satu’li, not only because it was new, but it offers an inventive, healthy menu at a quick service location.  It’s been great to see Disney move in this direction in recent years, even though they still have more work to do in this regard.

For breakfast, we decided to try one savory and one sweet item.  First up was this little beauty:

Normally, I’m not a sweets-for-breakfast kind of girl, but I really enjoyed this.  It was made from thick, rich, egg-y bread with a cinnamon swirl.  The blueberry cheesecake dollop tasted like real blueberries.  To me, the anglaise had more of a vanilla flavor than passion fruit.

My only complaint with this was that it needed more of both sauces.  There simply wasn’t enough of the two to go around, and the bread on its own didn’t have enough flavor.  With all three components of the dish combined together, this was excellent.  Once I ran out of delicious dipping sauces, I added maple syrup (available in regular and sugar-free) to finish things off.

The sausage was also great.  It was moist and had a unique, mild spice.

This dish was the hands-down winner of our meal, although both were tasty.  It was zesty, well-seasoned and had a great smoky flavor from both the pork and chorizo.  The hash was extremely flavorful and similar to the one served at lunch and dinner, but not the same.

Overall, Satu’li is a great addition to an already solid lineup of counter service locations at Animal Kingdom.  It’s above the hype that typically surrounds new restaurants at Disney World because it delivers hearty, original dishes you can’t get anywhere else on property.  Enjoy!

*Pricing based on current menu pricing at the time of publication and is subject to change.