Will There Be Enough Parking When Star Wars: Galaxy’s Edge Opens at Disneyland? 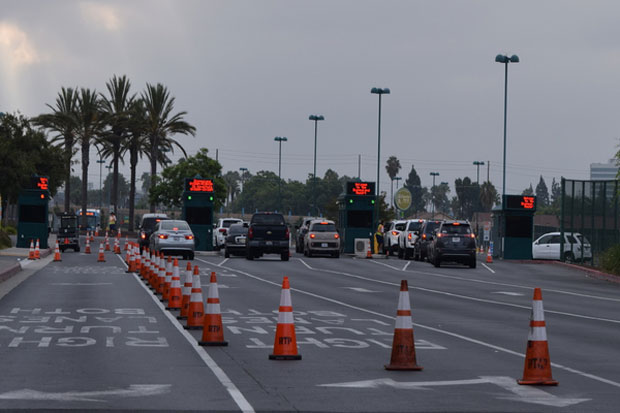 Disneyland’s biggest and most anticipated expansion is coming in 2019.  The 14-acre Star Wars: Galaxy’s Edge is expected to be a huge attendance driver for the resort.  With an expansion of this size, a large scale infrastructure project was also announced to handle the influx of crowds expected to descend on Anaheim. However, the infrastructure project has stalled, leading to a giant question.  Where will Disneyland guests park come 2019? As Disneyland was beginning to think about building a second gate in the 1990’s, a master plan was created.  To correspond with the widening of Interstate 5, two primary entry points were designed to get cars in and out of the Anaheim Resort District.  Traffic coming from the Los Angeles area to the north would enter from Disneyland Drive and lead directly into a parking structure.  Cars coming from the Orange County and San Diego area to the south would get off at Disney Way and into a separate parking structure.

As plans changed from the ambitious WestCOT into the relatively inexpensive Disney California Adventure, the resort infrastructure also shrank. While on and off ramps as well as city streets around Disney Way were built to accommodate a large scale parking structure, only the Mickey & Friends parking structure to the north of Disneyland was built.  The space off Disney Way was turned into the Pumbaa surface lot, primarily used for Cast Member parking.  To this day, Disney Way is largely a ghost town with most traffic coming from busses transporting guests to and from the Toy Story lot.

When it opened in 2000, Mickey & Friends was the largest parking structure in the world at a little more than 10,000 spaces.  The Toy Story lot located across the street from the Anaheim Convention Center added more parking, but that has proven not to be enough on busier days. Guests arriving by car and expecting to park at Mickey & Friends may be re-directed to one of several lots around Anaheim. Disney has used the Toy Story lot, Anaheim Convention Center, Downtown Disney, Pumbaa lot, or even the Garden Walk mall for theme park parking.  Cast Members are sometimes forced to park as far away as Angels Stadium of Anaheim and be bussed in.  All of the cars and busses crisscrossing the Anaheim Resort District can bring traffic around Disneyland to a standstill, frustrating guests as well as local residents. Disney was finally going to address their parking situation with the Eastern Gateway project. The long overdue parking structure would be built off Disney Way as originally intended.  The first phase would add 6,800 new parking spaces, with the structure designed to add even more with additional phases. New drop off locations for busses and taxis along with security would be placed here.  A pedestrian bridge would be built over Harbor Blvd connecting the transportation center to the resort esplanade.

Local merchants complained the project would restrict direct access to Disneyland from Harbor Blvd and their businesses.  They contend it will lead to job losses from lost business and the bridge does not fit in with the surroundings.  Due to the local opposition, the City of Anaheim has yet to approve Disney’s design.

At this time there is no timetable for a resolution, and the Eastern Gateway is not even on the agenda of the Anaheim City Council for the foreseeable future.  There appears to be a staring contest going on between the City of Anaheim and Disney.  In the meantime, construction on Star Wars: Galaxy’s Edge is progressing quickly. With each passing day it is becoming more likely that Star Wars: Galaxy’s Edge will open without any additional parking at a resort in desperate need of it. Spring 2019 can’t come soon enough for Disneyland and Star Wars fans.  The park could see unprecedented crowds.  The more difficult and time-consuming part to your 2019 visit to Disneyland may not be getting on a Star Wars attraction.  It could be finding a place to park.