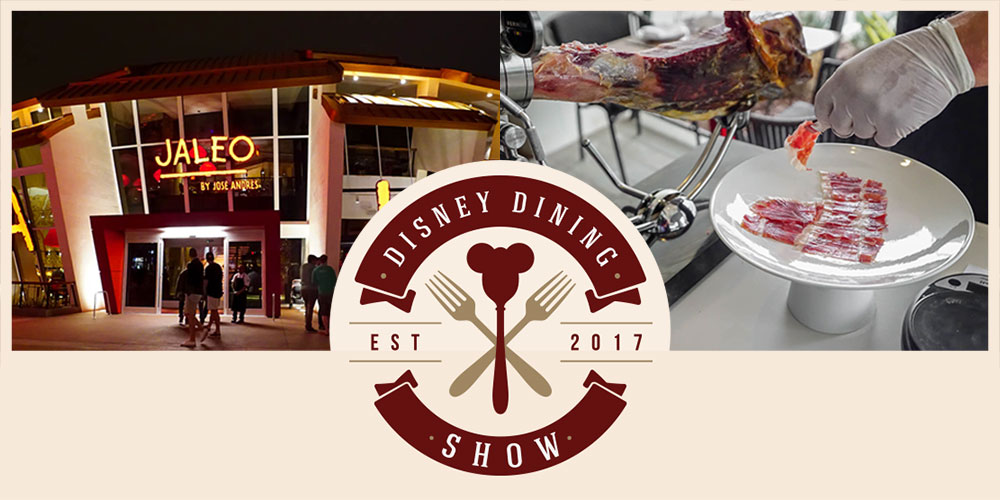 **The Disney Dining Show publishes reviews of meals that we pay for. We only utilize discounts and offers if they are available to the general public, such as annual passholder discounts and Tables in Wonderland membership. We receive no outside compensation for our dining experiences so that we may give our honest opinions about price and value.

On a surprisingly cool and drizzling Saint Patrick’s Day evening, Chef Jose Andres joined the likes of celebrity chefs as far ranging as Wolfgang Puck and Guy Fieri by making his mark on Disney Springs dining culture. At 5 pm last night, Jaleo opened its doors to the public.

Chef Andres is highly respected and admired for not only the introduction of tapas-style dining to areas across the United States, but also for his fusion of scientifically advanced gastronomic techniques with a traditional dining experience. He has opened restaurants all across America, each debuting to rave reviews. Throughout interviews over the years, Andres has made his motivation clear: He wants diners to be relaxed, invested, surprised, but most of all have fun in experiencing the most flavor possible in each small bite.

While this thought process is one that most of us could get behind, the question is whether Jaleo manages to live up to this ideal, and if so, is the cost worth it to your average Walt Disney World guest?

Corey Fiasco and I headed down to Disney Springs’ West Side on opening night to see if we could find some answers to bring back to the rest of our crew at the Disney Dining Show. 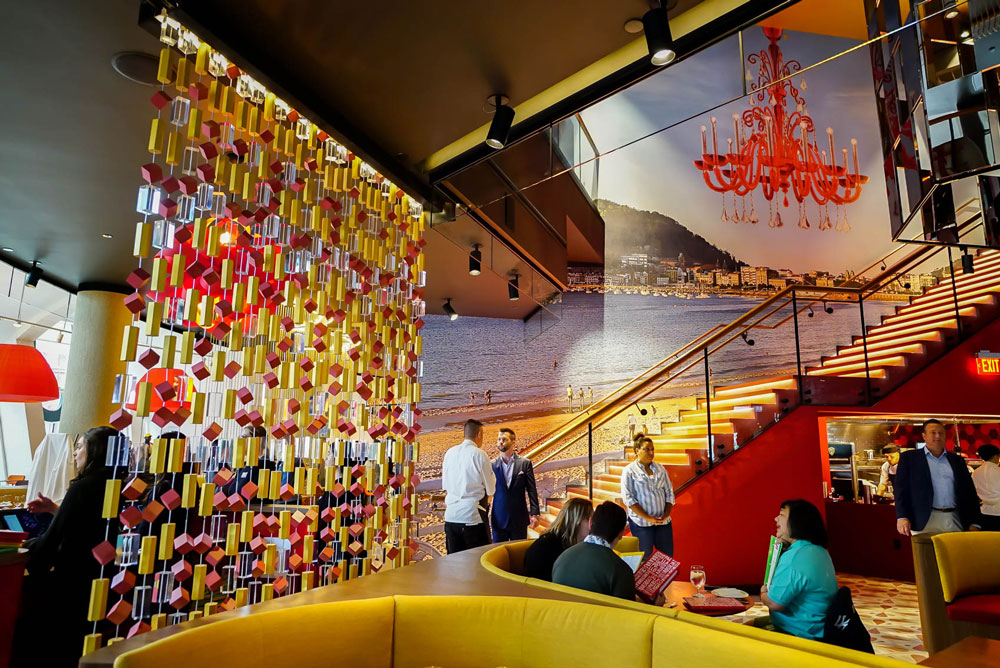 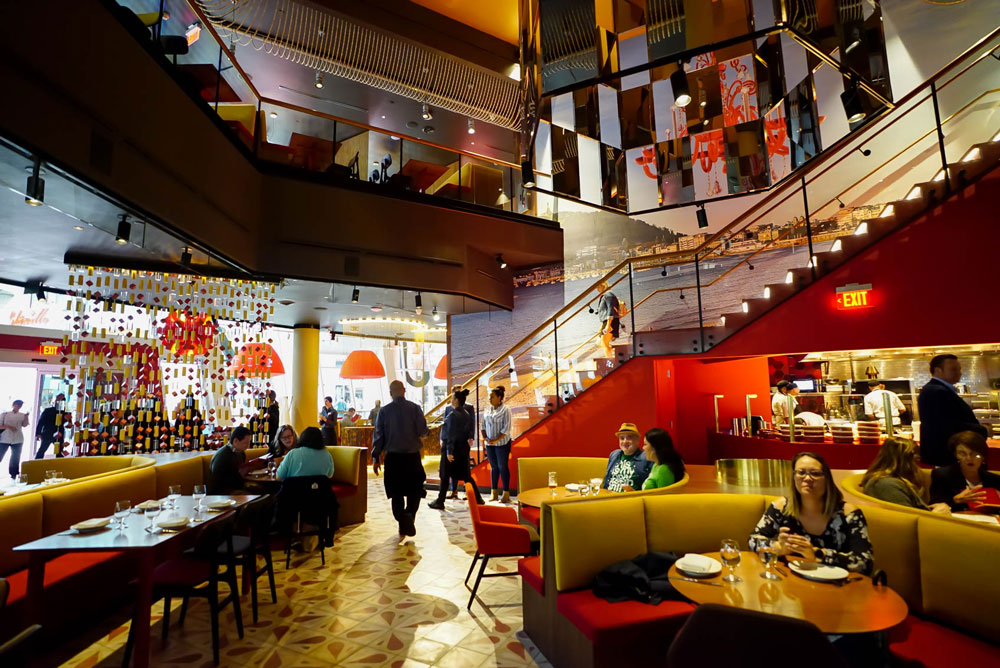 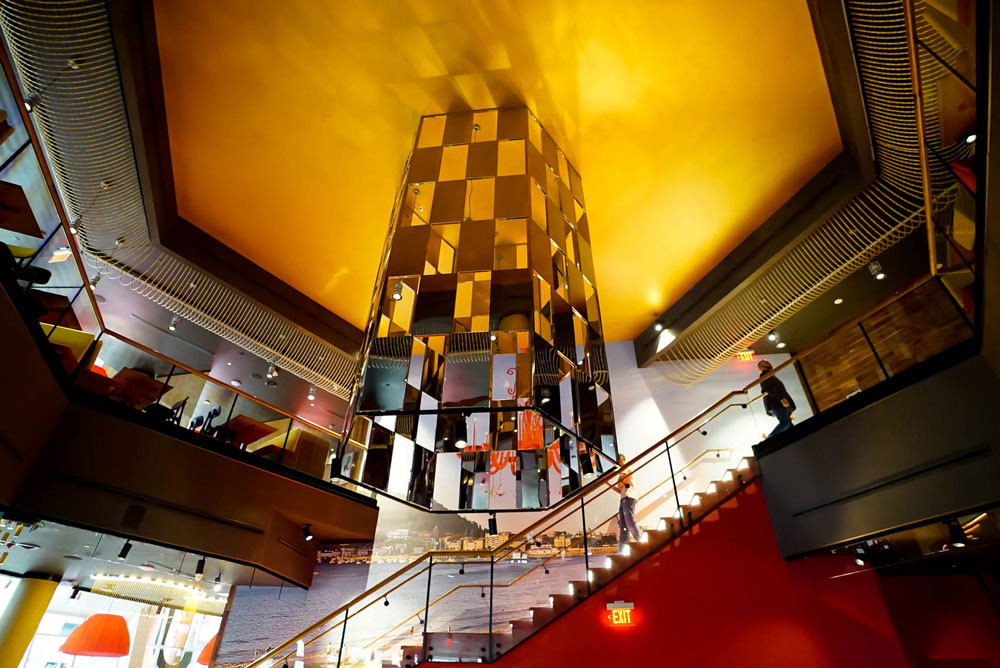 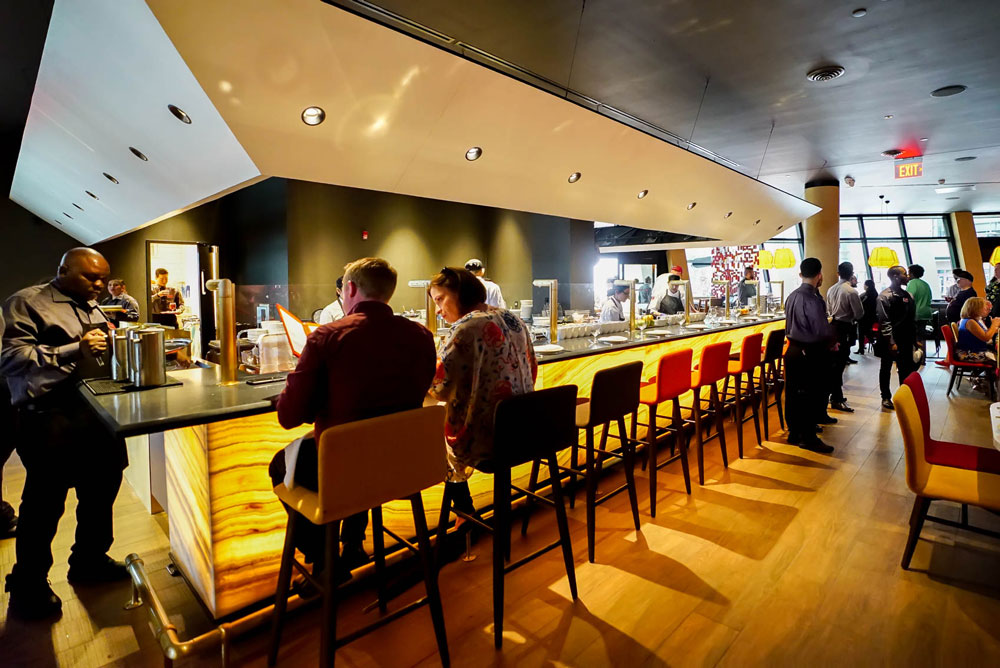 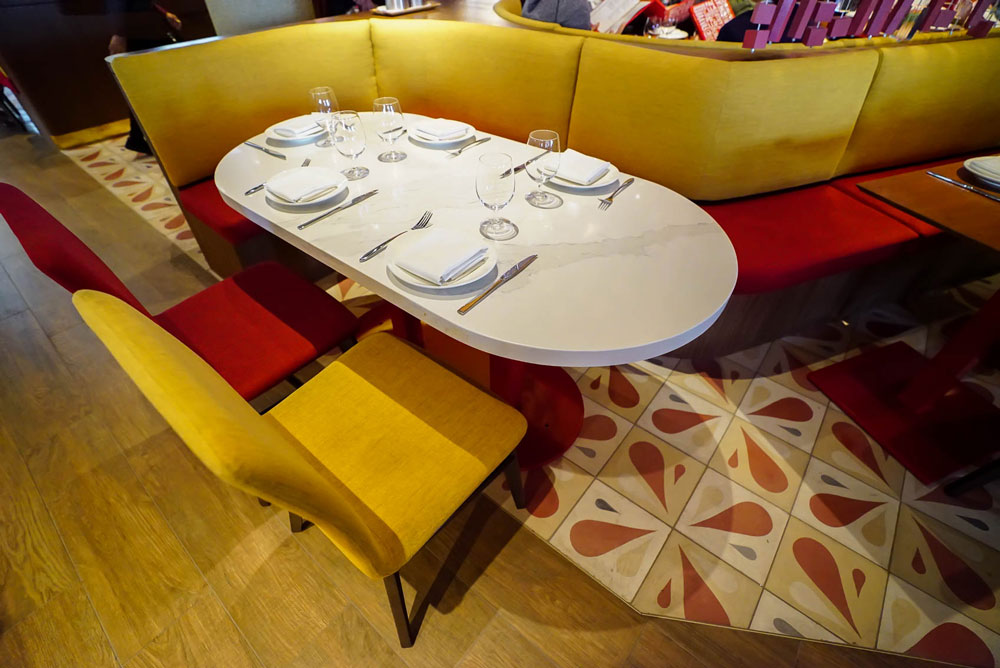 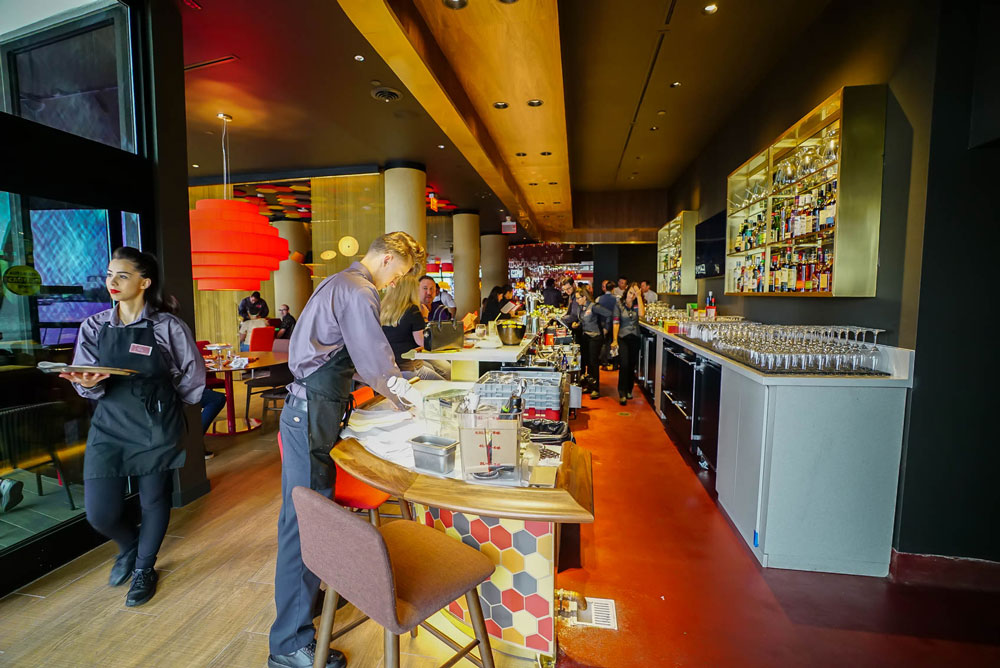 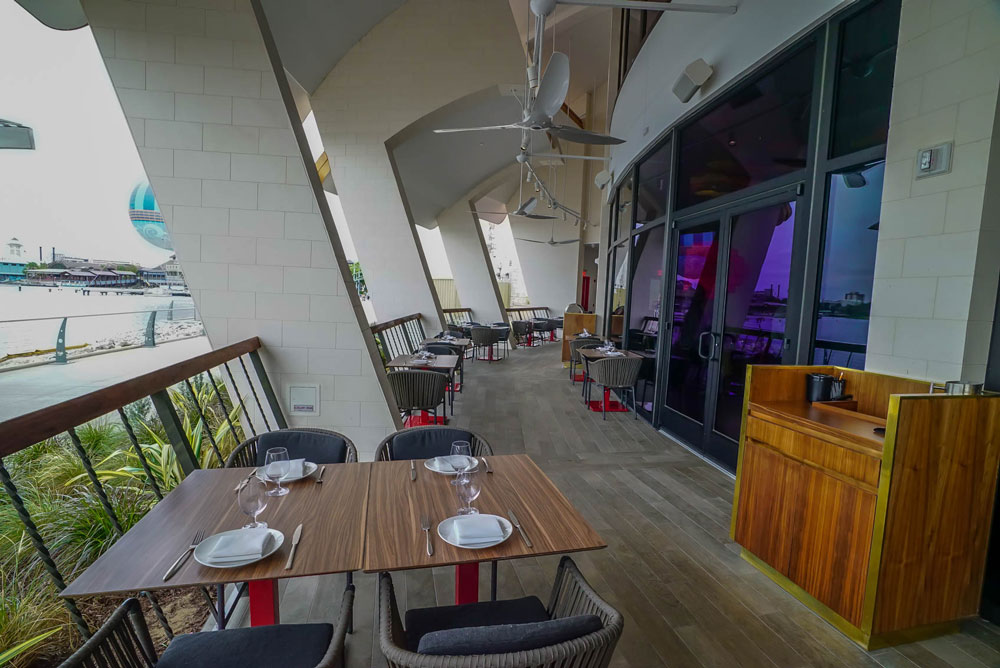 Most likely in an effort to reflect Andres’ culinary combination of gastronomic science and old-world cuisine, a recurring theme in Jaleo’s decor is warm color tones used to offset crisp lines and geometric shapes. Vivid reds, yellows, and oranges adorn polygonal accents in each room.

Jaleo has ample space for seating (although the upstairs area was closed to guests for the night), and even large parties will be able to find some intimacy for conversing over their cuisine. For smaller parties less concerned about the process of an extended formal dining experience, tapas bar seating is also an option. Outdoor seating stretches around the back with a beautiful view of the lake — this was where we sat, and the fact that it was an uncharacteristically cool Florida night did not hurt our enjoyment of the occasion. 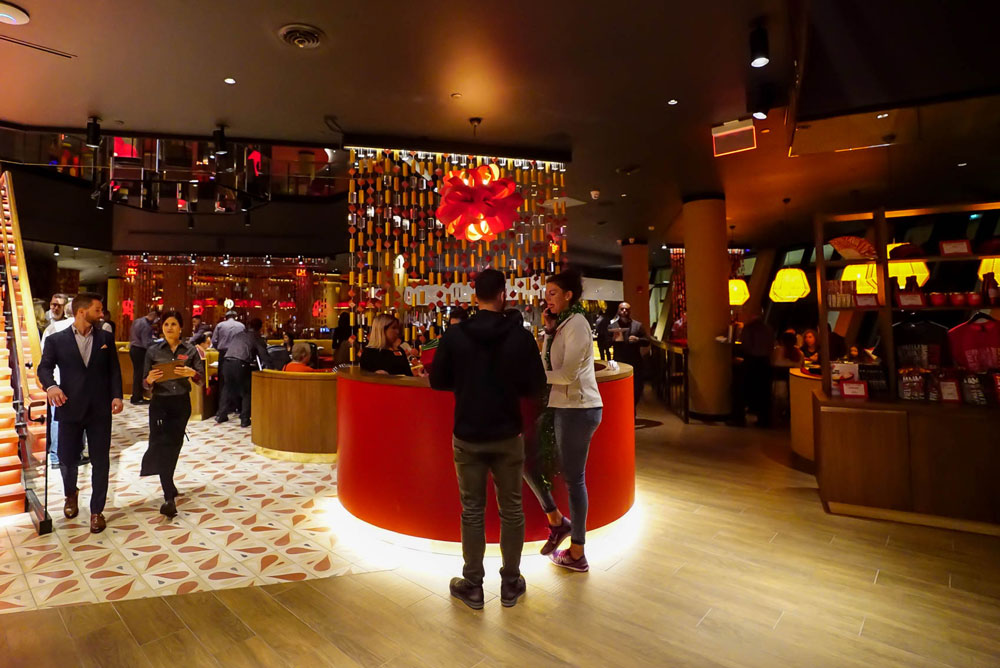 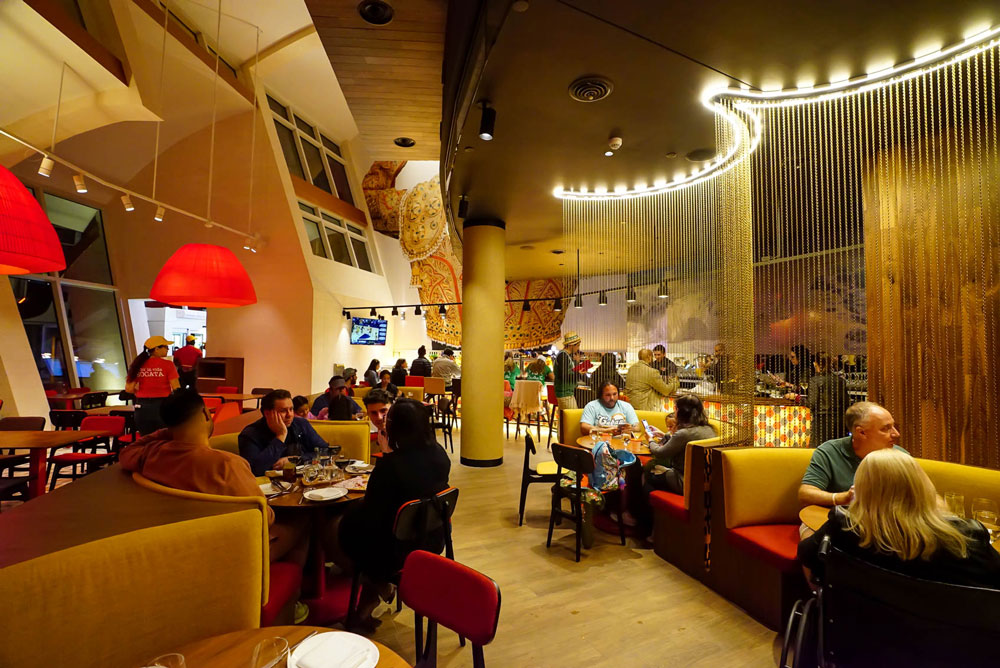 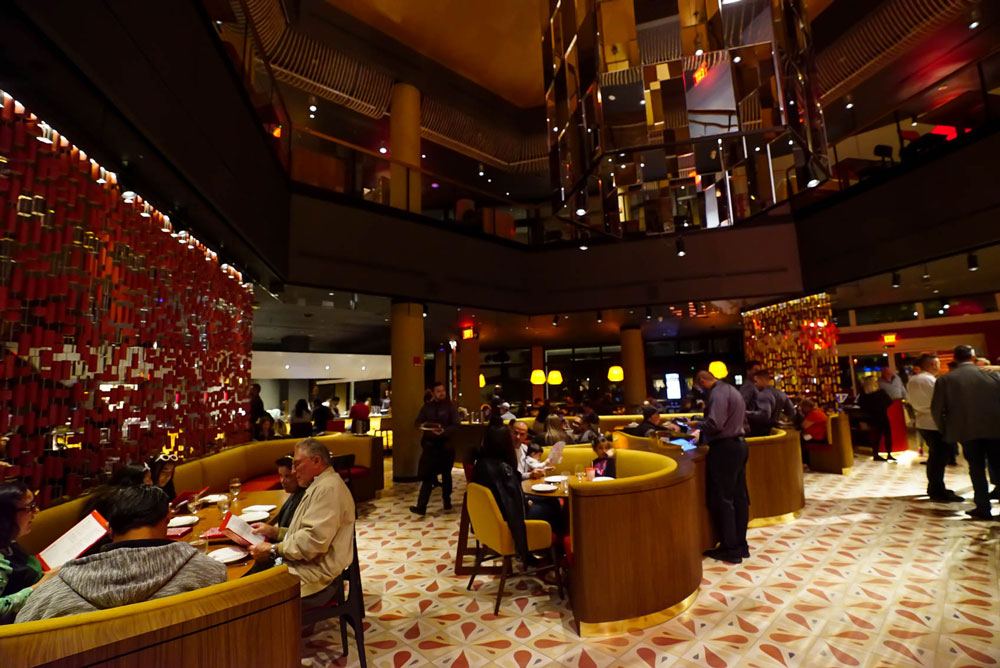 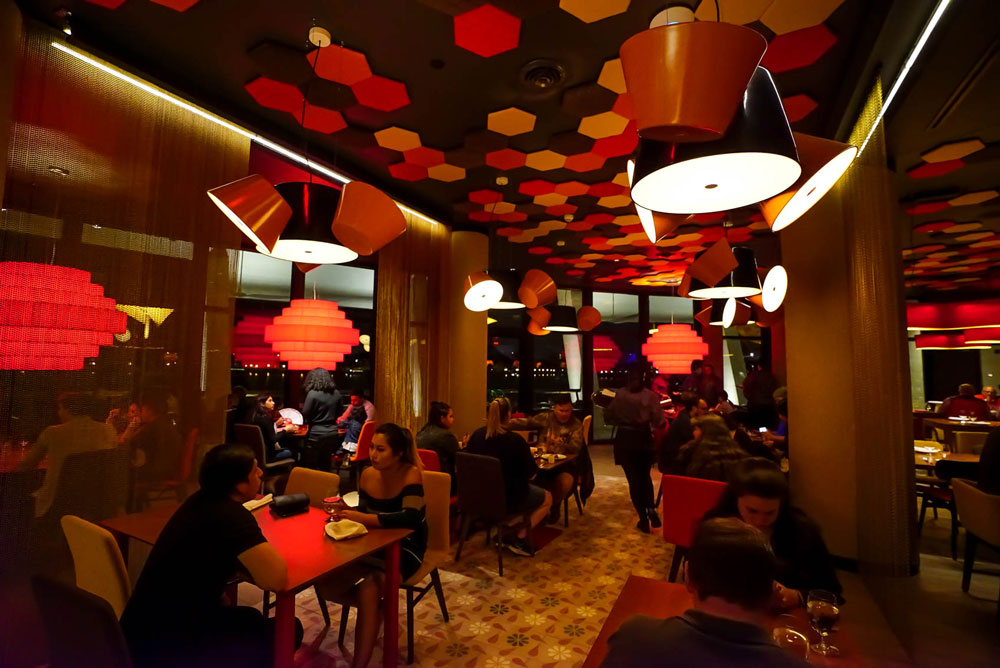 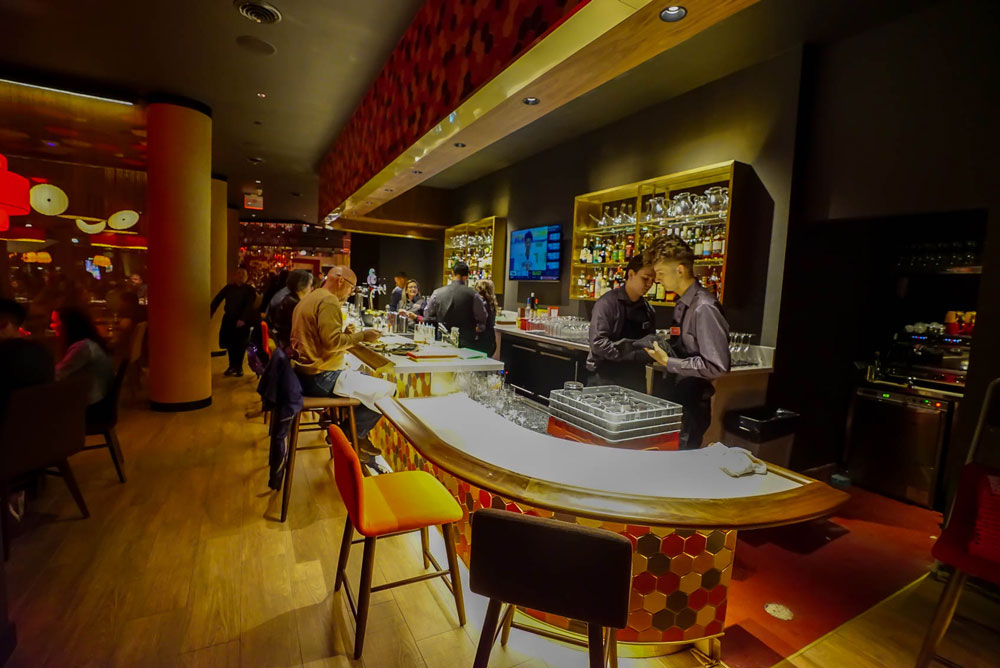 Once the sun set was when Jaleo’s ambiance truly began to take hold, as calculated back-lighting managed turn the restaurants already-striking colors and shapes into a spectacular artistic display.

Our humble-yet-knowledgeable server Gustavo was well trained and educated on the benefits of each dish. With his help, we managed to pick out some impressive and satisfying plates. Here is a rundown of what we experienced: 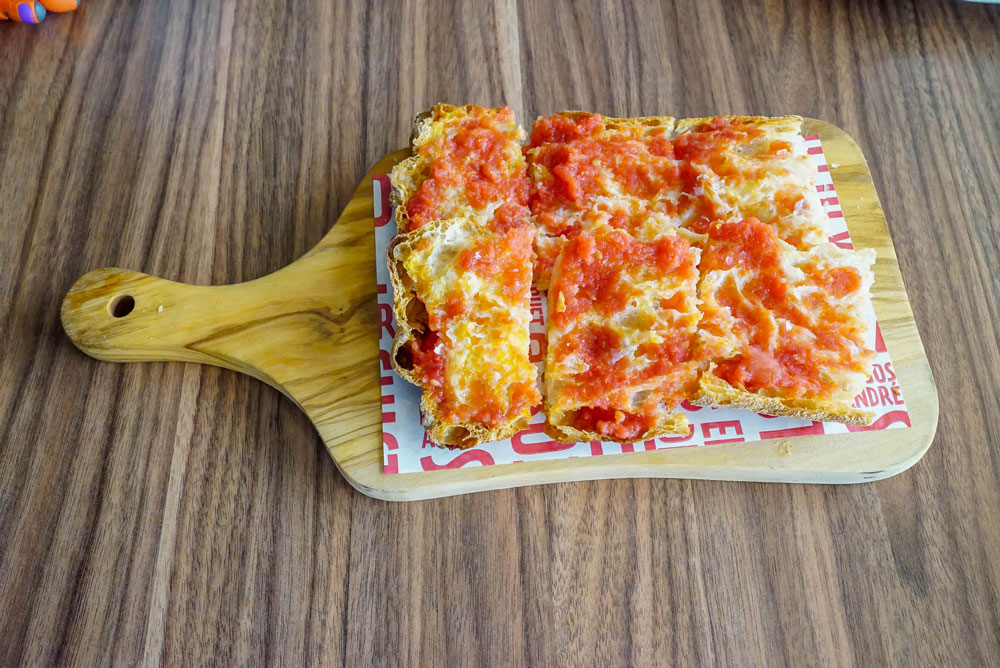 While it isn’t necessary to start every meal with bread, we were very glad we did. The bottom of this unique and satisfying dish had a signature crispness to it, yet the top was moist and absolutely intense with fresh tomato flavor. It may seem simple, and the idea is, but this is one of those cases of a basic design so well executed that it becomes something else entirely.

For some, $12 for bread service — even if it tastes like the bruschetta they serve on Mt. Olympus — is a little too pricey. As we’ll quickly find out, though, Jaleo is not the place to go if $12 bread seems like a scary prospect to you. 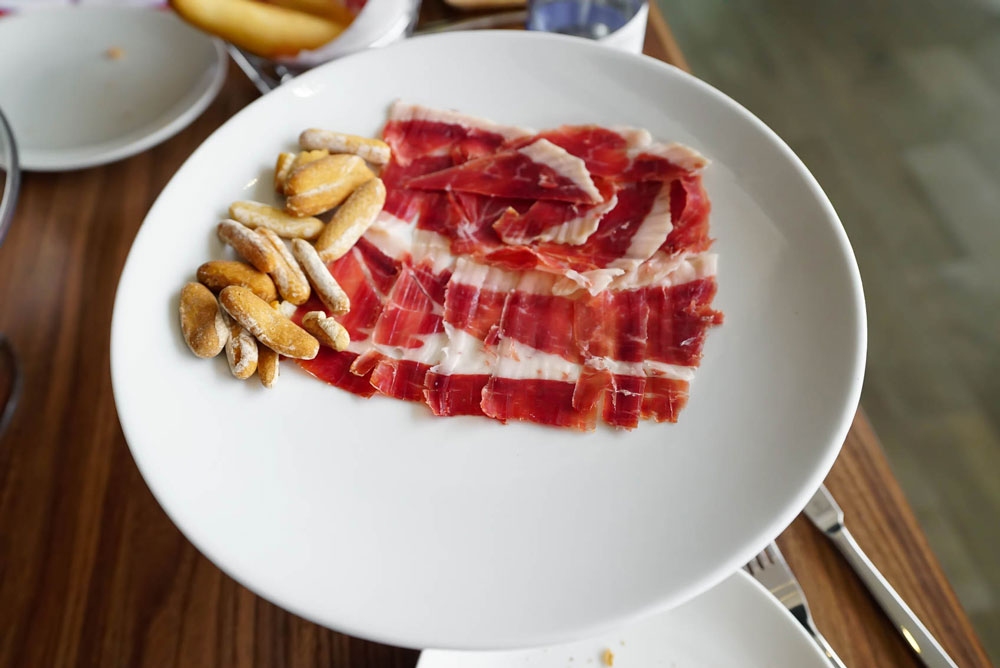 If $36 for that small plate of ham doesn’t make any sense to you, that is understandable. This is where Jaleo sets itself apart from others in the area and its mission becomes clear. Not every dish is about making sure you don’t leave hungry — the beauty is in the experience. You can get a similar plate of 36+ month cured ham, a product of the world-renown ibérico pigs of Spain, but choosing the “cortado a mano” version gets your meat hand carved tableside. 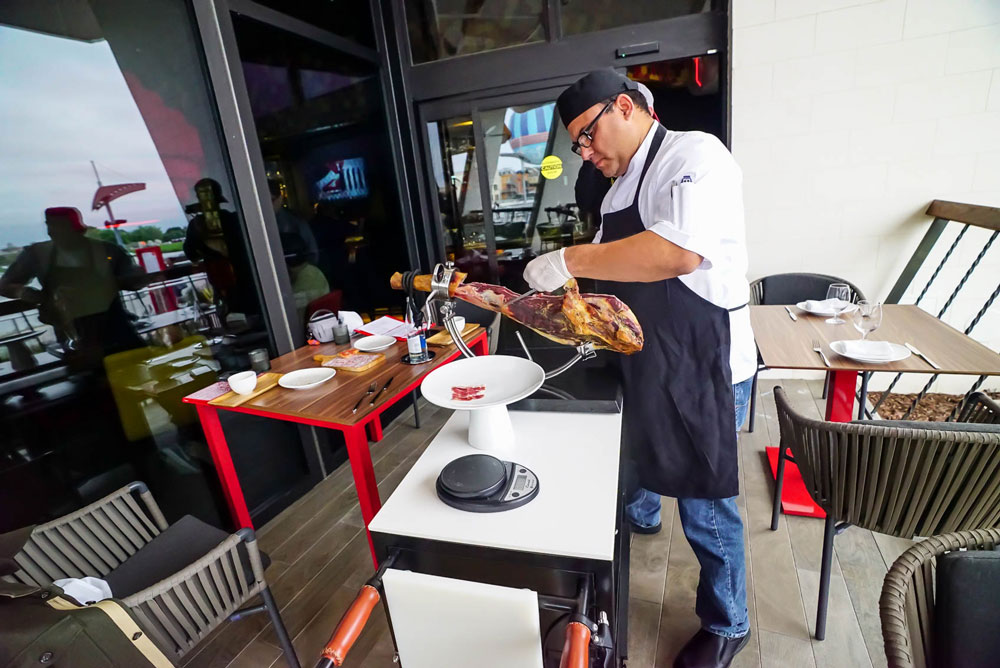 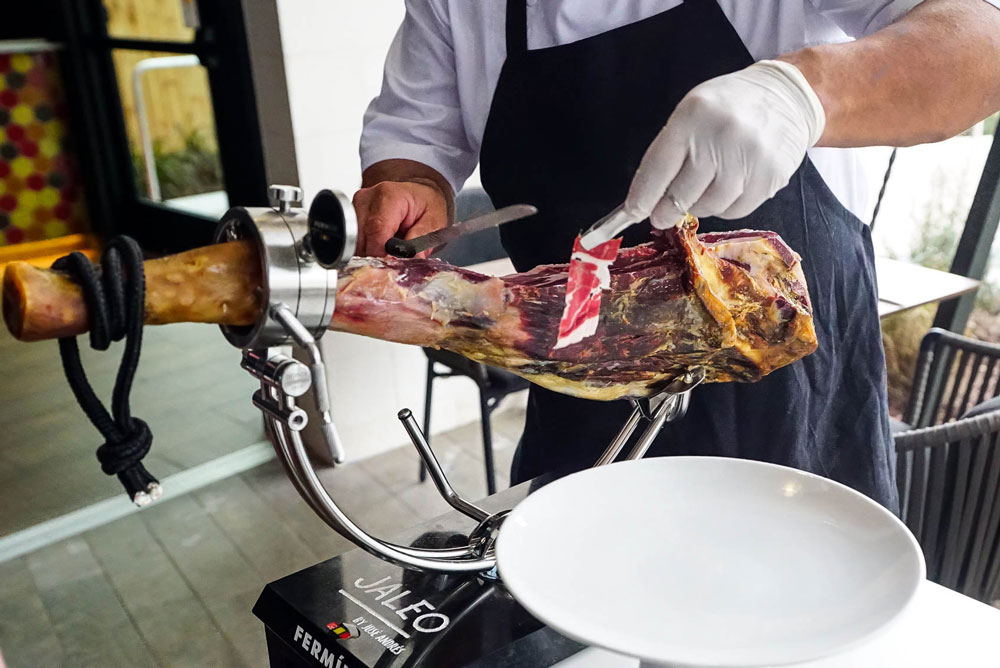 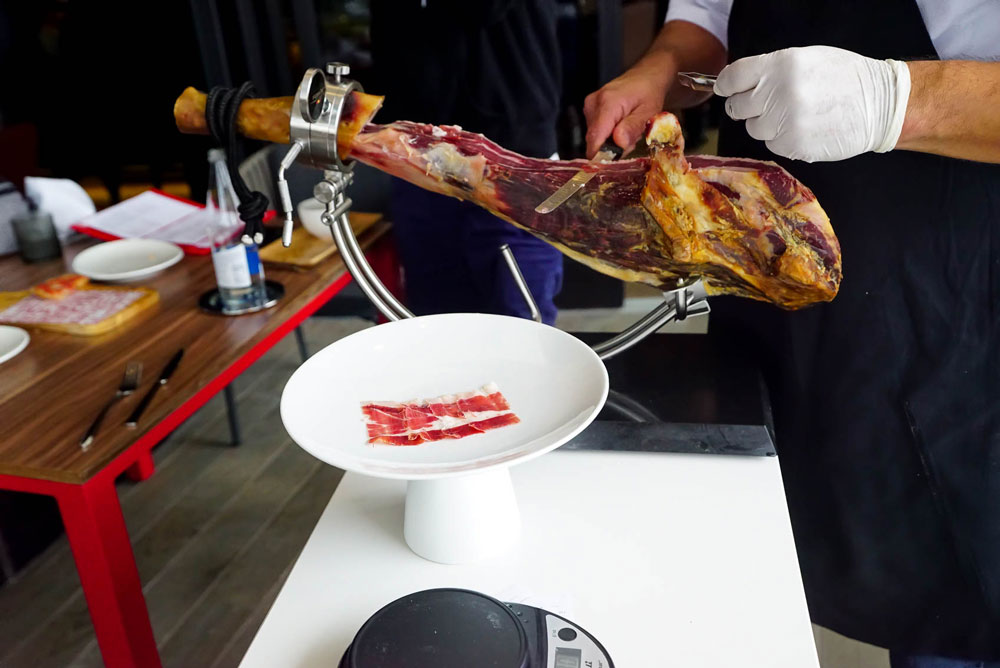 The taste of this ham is deep and strong, so it is really ideal to consume in razor-thin slices to savor as much flavor from each ounce of pig as possible. Watching a master do it directly in front of you is worth the extra $6; I mean, you’re already spending $30 for a few mouthfuls of ham. 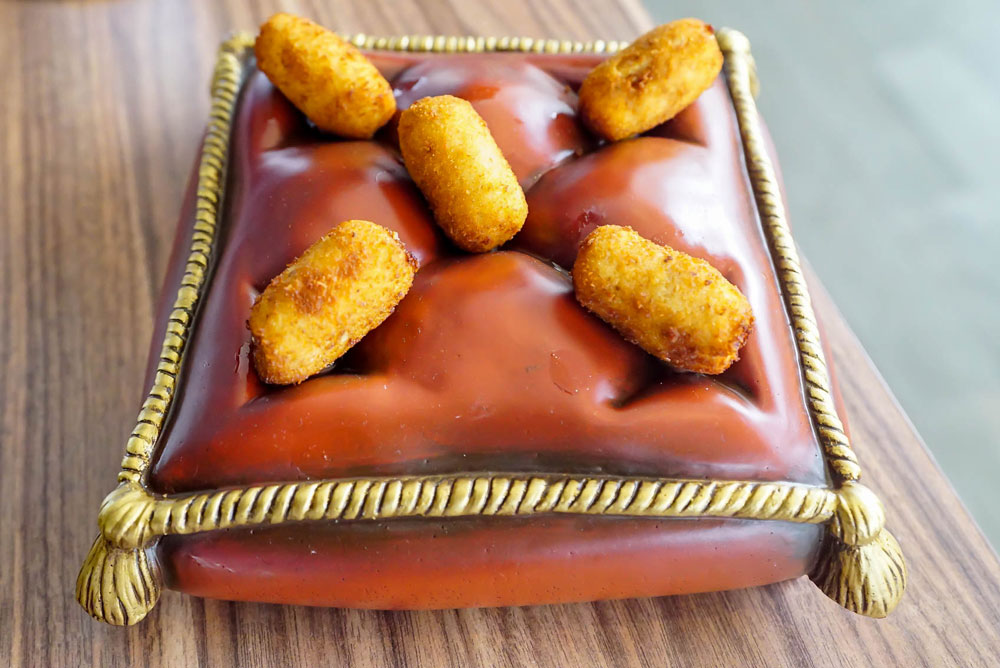 While I don’t recommend taking an overly picky eater to Jaleo (I just personally wouldn’t risk the dough on someone not in the mood for adventure), these chicken croquettes are probably the most accessible dish we had. That isn’t to say they weren’t impressive. While I hate to describe them as amped-up chicken pot pie fritters, their creamy shredded chicken consistency really evoked that sensation — in a good way. You’re looking at over $12 for five of them, and this might be the only one I’d pass on next time for something a bit more surprising. 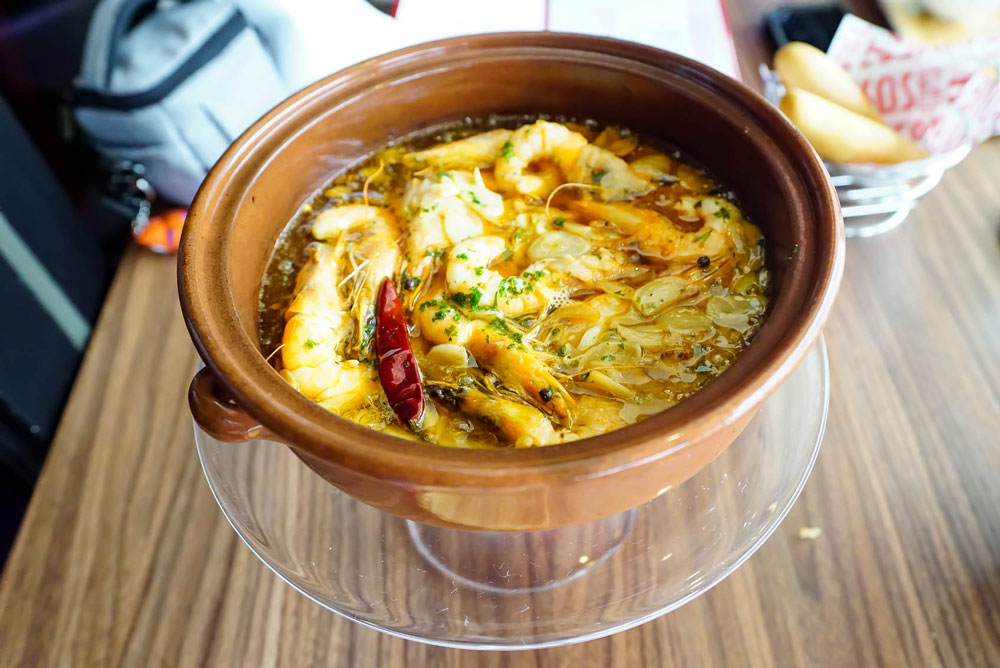 Not only was this shrimp dish exquisite, but it was also one of the more substantial portions of the night. The heads are left on to soak in the flavor — the chef’s summertime tradition — and they accomplish their task exceedingly well. Thin shavings of garlic are strewn throughout, and after you’ve squeezed the shrimp heads to get the juice out, it is highly recommended that you use some of the bread provided to soak up the delicious broth. In an evening full of amazing food, this dish stood out as one of the best overall, hitting high marks for quality, quantity, and eating experience. 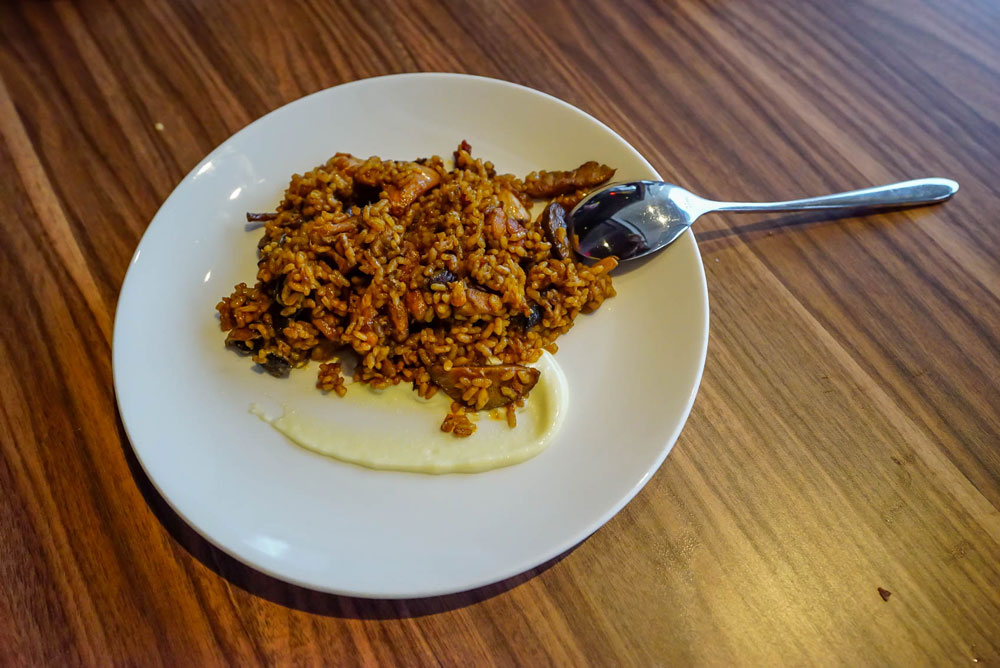 Just barely edging out the shrimp for our favorite dish that evening was this humble-yet-exotic combination of rice, chicken, and mushrooms. The most filling of any of the options — as you’d expect from the paella portion of the menu — it managed to serve as a mixture of comfort food and adventurous cuisine. A large part of that was due to the palpable earthy flavors of the mushrooms that completely saturated the moist rice and chicken. Along with the shrimp, if you were to stop by Jaleo and want to get out without having to pawn your watch for cab fair home, each person getting a dish like this and then an appetizer to split should fill you up enough to not find yourself driving to Denny’s and shame-eating an hour after you exit. 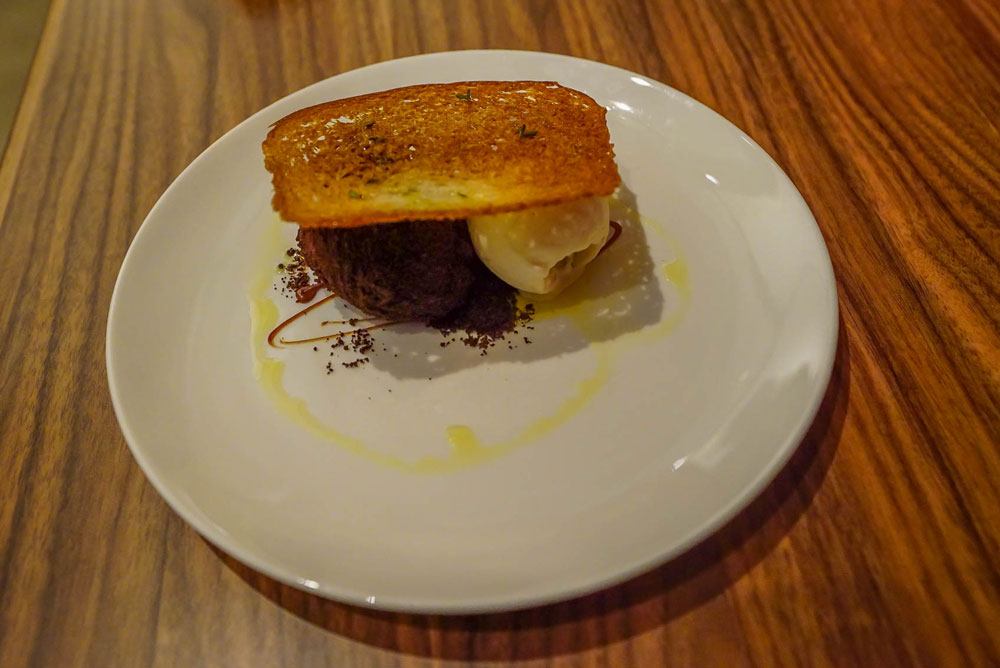 While I have mentioned price-per-portion quite a few times now (it is a small-plate establishment, after all), I must say that their desserts were much less costly than I expected. For only $10, this chocolate mousse expertly paired with paper-thin bread and brioche ice cream was a wonderful value. The addition of the olive oil on the bread, which crumbles apart at contact, really added a complimentary tone and texture to the dessert. 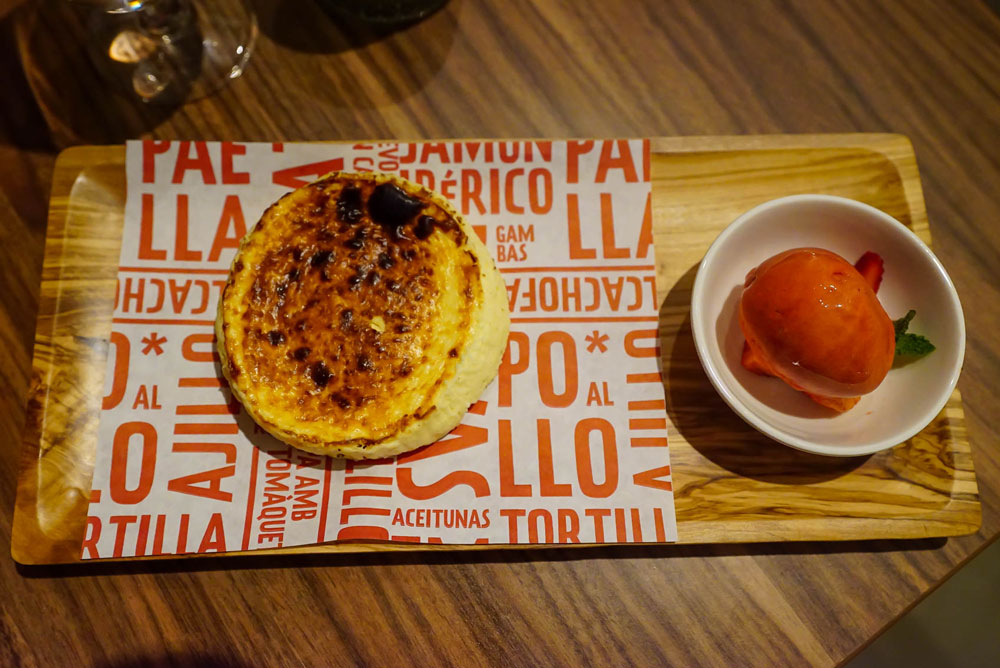 While certainly not for everyone, we thoroughly enjoyed this goat cheese cheesecake. Gustavo advised us to bite first from the middle, where the texture would be creamiest, and then pair the bites with the seasonal sorbet. The choice for this one is pretty simple: If you are turned off by goat cheese, maybe stay away — if not, this may be the most fun dessert you eat all year.

While it’s quite obvious that we enjoyed ourselves at Jaleo, we ate every single one of these dishes and did not leave with overloaded stomachs. As mentioned, Jaleo is to be more about a flavor experience than filling up bellies. There is definitely a place for that style of restaurant in Disney Springs, but for many vacationers this would be a huge budget expenditure on top of the already substantial Walt Disney World vacation bill.

Between two of us our bill came out to $159.22. Add a tip to that — a good one, the service and timing were phenomenal (especially considering it was opening day) — and you’ve got a hefty chunk of money to pay, especially considering that the establishment does not take Tables in Wonderland or have an annual passholder discount. It is on the Disney Dining Plan for 2 table service credits though.

Jaleo probably functions best for special nights out; anniversary’s, birthday’s, or just date nights meant to impress could warrant a trip to this adventurous culinary experience.

To see what other diners are saying about Jaleo and take advantage of a wealth of other Disney dining advice and experience stop by DISboards.com and hit up the Restaurants forum.

*If you’re interested to see what Jaleo’s quick service offering, Pepe, is all about, check out our review HERE.