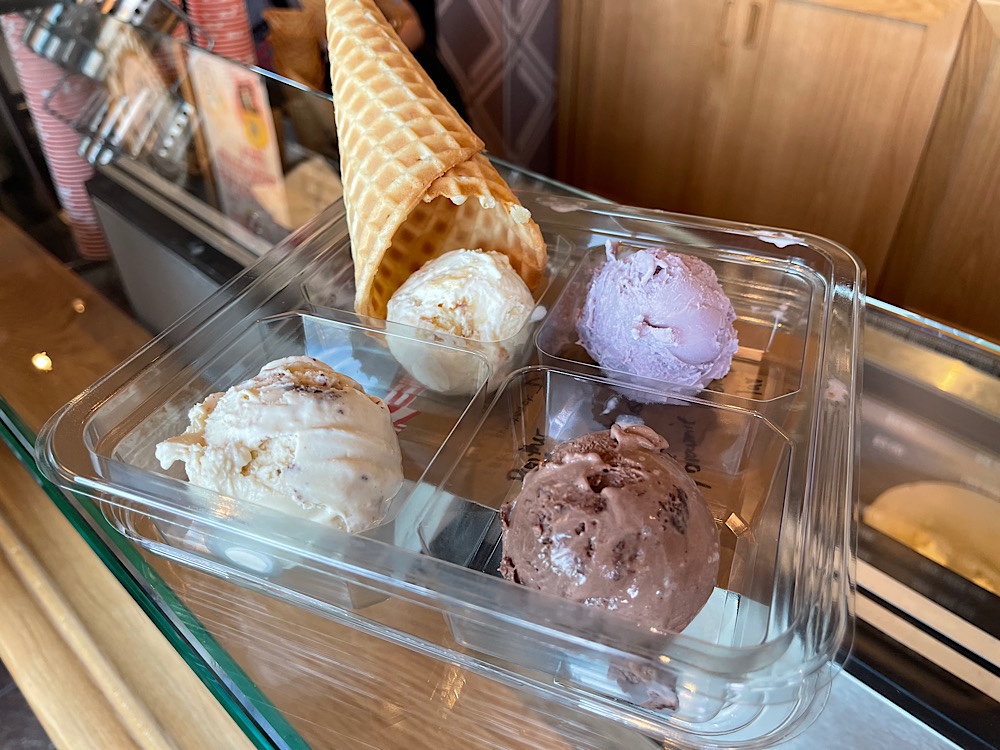 Ryno looked at me recently and remarked that I really like sugar. Granted, I was sitting there rattling off a list of some of my favorite snacks, and at first, I tried to refute the accusation, but as I sat there grasping at straws in my mind, I just couldn’t. I do love sugar. He’s right. So, with today being the opening day for the new Disney Springs location of the beloved Salt & Straw, you know where I had to be. In that scoop shop. With my great penchant for sugar.

First things first, we were promised a whimsical exterior for the new shop, and while I was underwhelmed with what I saw during construction, I must say that the end result delivers. The brown portion of the building resembles the pattern of a waffle cone (and the pattern’s repeated on the wallpaper inside the shop, too), the colorful ribbon reaching across the front of the building, and the giant hand holding an ice cream cone all result in a fun and over-the-top introduction to the location.

Second things second, when I arrived at noon, there was hardly a line. Just because it’s opening day or week or season for a location doesn’t mean it’s going to be incessantly swamped. Stop by; you just might catch the line at low tide.

I’ve gone on and on about my love for Salt & Straw’s Disneyland scoop shop and I’ve longingly watched the construction walls as the former Something Silver (sniffle…may you rest in peace) was transformed; this was a Disney Springs addition that I could definitely get behind. But would it be the same? And would the east coast-specific flavors be all that I hoped they’d be? These are the hard-hitting questions that I was hoping to answer today. Here goes.

I rolled into Salt & Straw ready to get their Ice Cream Tasting Flight ($14.75). They had promoted the four-flavor flight (say that three times fast) on Twitter the other day, and it was enough to sell me on the thought of getting one scoop of four different flavors to try today. It’s opening day; I had to, right? I wanted to try the two east coast varieties (Panther Coffee Chocolate Tres Leches and The Salty Donut Guava + Cheese), and added in a scoop of Chocolate Gooey Brownie and Honey Lavender for good measure. The flight will normally come with waffle chips, but since waffle chips weren’t ready today, I was given a waffle cone to break and eat with the ice cream if I wanted to.

The first of the two area-specific flavors? Hello. That Panther Coffee Chocolate Tres Leches is incredible. INCREDIBLE, I tell you. The coffee and cream are perfectly balanced. It’s coffee with cream in all the best ways. After I was finished with my ice cream, one of the Salt & Straw leadership team members asked me what I thought. I told him of my great love for the Panther coffee flavor, and he mentioned that they were going for the taste of espresso in this particular flavor, while another of Salt & Straw’s coffee scoops might lean toward a cold brew taste.

If you’ve read Saturday Snacks, you know of my fervent love of Tres Leches Cake. There’s a chocolate-based ribbon of Tres Leches Cake running throughout this flavor, and I found the creamy texture and “coffee with cream” taste completely intoxicating.

The Salty Donut Guava + Cheese flavor is good, and not too cheesy. I know that the whole cheese in my ice cream thing might throw you. I empathize. However, the cream cheesiness isn’t in your face, and the texture of this flavor is delightful. You’ll find chunks of brioche donut and guava curd throughout the cream cheese ice cream.

The Chocolate Gooey Brownie? Friends, this is a classic. If you enjoy chocolate, you’ve gotta get it. Large chunks of chewy brownie meet a swirl of housemade marshmallow fluff. Yes, please.

And, lastly, the Honey Lavender. Listen, I love both honey and lavender. I have a lavender plant sitting in a pot outside my front door. It’s a my all-time favorite plant and I even enjoy the occasional lavender-flavored treat. However, this lavender flavor tasted as if I was eating soap. Or maybe I should say that it tasted like what my bathroom soap bar smells like. It led with the honey, which was nice, but then the lavender took the wheel and we went careening into Yardley’s soap territory. I’ll skip this flavor next time.

There are seasonal flavors on the menu, with the current flavors having been inspired by both the writing and creations of students in partnership with Scholastic. I’ll be back next to try these, with Rosie The Pink Flamingo being at the top of my list. The Salt & Straw team member with whom I had the pleasure of speaking afterward mentioned that all of the shop’s inclusions are housemade and are created specifically to work well in ice cream, right down to the little pink gummy bears featured in the Rosie flavor.

If you stop by the shop, keep in mind that it’s fairly small inside, and if the counter’s filled with people, it can be tough to figure out who’s in line for the cashier and who’s not. Just keep swimming. Head to the end of the counter, and you’ll find the cashier on the right.

There are pre-scooped pints available to take back to your resort room, as well as merchy items like waffle cone-scented room spray (who doesn’t need that?!) and copies of the Salt & Straw cookbook.

Will the new Salt & Straw location be added to your must-do list for your next trip to Walt Disney World? If it is, hit me up. I’ll meet you.