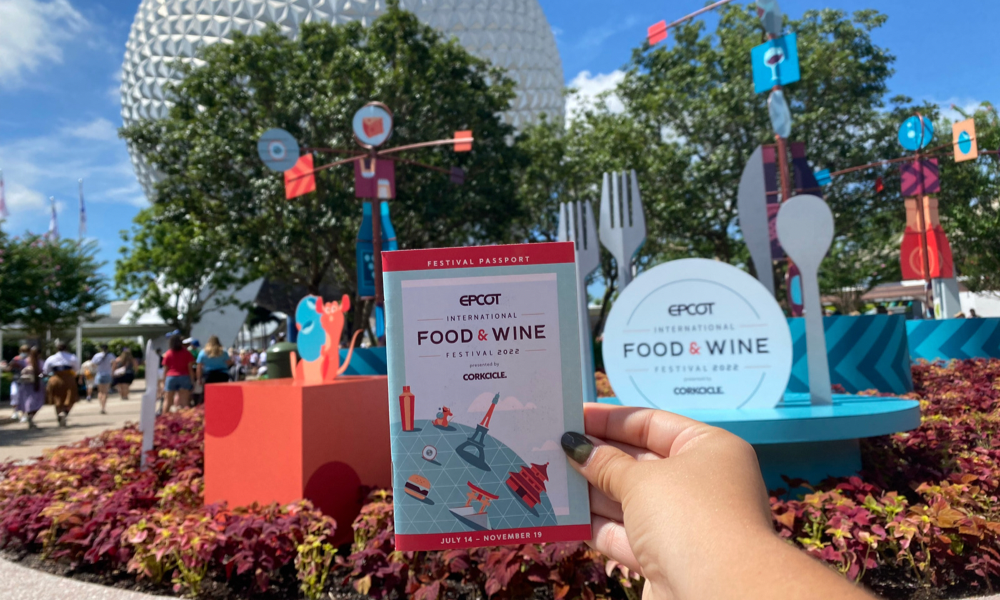 EPCOT International Food & Wine Festival has arrived. This is my first Food & Wine Festival with my new dietary restriction. A quick recap: back in April, it was officially confirmed that I am allergic to dairy. On top of this, I don’t eat meat except for fish. That makes me a pescatarian that can’t have dairy. I have read every menu for this festival and created a list of what I can eat. Surprisingly, there are more than three things on my list. Mind you, some booths don’t open until August 11th, so those booths won’t be included in this, but don’t worry; when they open, I will investigate.

There are eight items on my list, and I couldn’t be happier. Today I won’t be able to eat everything on the list, reminder I’m the girl that eats off the kid’s menu. I did get to try three items today, and one of those was the mousse because I needed to end my day with something sweet.

Earth Eats was my first stop. Today is day one of the festival, so every booth has lines, but this one moved quickly. I got both food items from this booth the slider and the meatballs. These food items have a kick to them, so for anyone sensitive to spice, this is not for you. Surprisingly the meatballs are spicer than the slider, which has a wasabi sauce. The only negative thing I have to say about my experience at this booth is that it is just too hot in July to be eating this food. This food is served hot and sits heavy in the belly. I will get these items again this year, but not until October. The slider was $6.00, and the Meatballs were $5.75, and I think both items are worth the price.

After eating that hot and heavy meal, I needed a refreshing dairy-free dessert. Lucky me, the booth next door, Shimmering Sips, had exactly what I needed. The plant-based Guava Mousse. This dessert is a ten out of ten. That could be because there is no other dessert I can eat at the festival, but I thought it was great either way. It wasn’t overly sweet; in my opinion, I feel like it had a nice balance of tart and sweet. To enjoy this dessert, you have to like the guava. The sugar cookie at the bottom adds the perfect amount of crunch. I will be getting this food item again. The Guava Mousse was $4.75, which is a fair price for this item.

Yes, it’s hot and uncomfortable to eat all these warm foods, but the bright side is that this festival lasts until November 19th, so there’s plenty of time for the weather to change. There’s also plenty of time to come back and try more food! I can’t wait for the other booths that open on August 11th so I can see the other plant-based options that will be available. Don’t you worry; I will be back to try the other plant-based options that are currently available before those other booths open with new options.

What booth are you most excited for? Let us know in the comments!