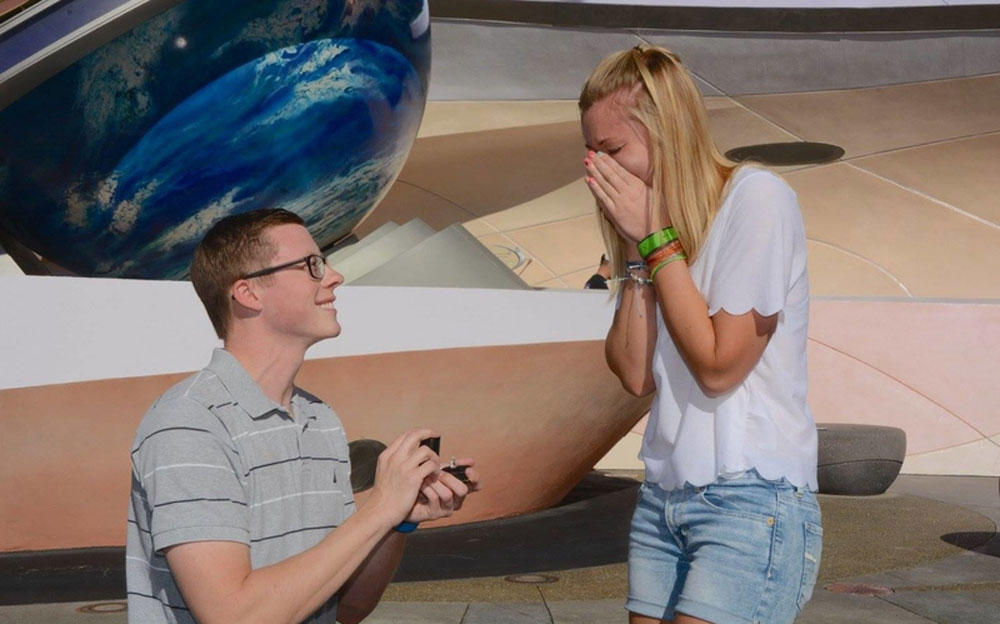 The calendar shows February. Valentine’s Day has come and gone.

The time of the year has me thinking of love, specifically marriage proposals at Walt Disney World.

An unprecedented number of wedding proposals take place at Disney Parks each year. With the ever-increasing use of social media platforms, picturesque Disney proposals are popping up daily. The three Instagram hashtags of #disneywedding, #disneybride, and #disneyengagement alone account for over 218,000 posts.

If I were a betting person, I would strongly wager that proposing in front of Cinderella Castle at the Magic Kingdom is the single most popular location to pop the question on WDW property. After all, Magic Kingdom is the most visited theme park in the world, bringing in 20+ million guests annually since 2015.

Seeing the 189-foot tall castle up close or from afar for the first or hundredth time doesn’t stop feeling like an enchanted dream. You could propose from afar on Main Street U.S.A., in front of the Partner’s Statue, by the Cinderella Wishing Well. You can even propose before/during/after the nighttime spectacular — called Happily Ever After. I mean, the name of the production says it all.

That being said, Walt Disney World is nearly 40 square miles, or the equivalence of San Francisco. In other words, it’s huge.

Working the courage up to finally pop the forever question to the love of your life is also huge.

It is important to keep in mind how you feel. Maybe you’re an introvert; I certainly am to an extent. You want to propose at Disney, you both love Disney, so it just makes sense but maybe that castle moment isn’t perfect for you or your loved one.

Odds are that you are going to be a little nervous, maybe shake, stutter, and even sweat a bit more than you would on a normal warm summer Florida day.

But that’s okay. It’s good actually. You should be nervous; love rattles us in the best way.

As Uncle Ben from our favorite web-spinning superhero once said,

It is your responsibility to get this right.

Does it really come down to where you propose?

Maybe they do really love Cinderella Castle, maybe Magic Kingdom is their favorite park. Then yeah, don’t overthink things and just propose there. Proposing in front of the castle is popular for a reason.

Make sure you find a place that suits both of you. There are countless spots to propose at Walt Disney World, some that are quiet and out of the way but still come with that famous Disney energy.

What I’ve done is assembled a list of eight, what I believe to be unique and intimate locations to propose.

I also came up with two rules to help narrow down and find some unique locations to propose. 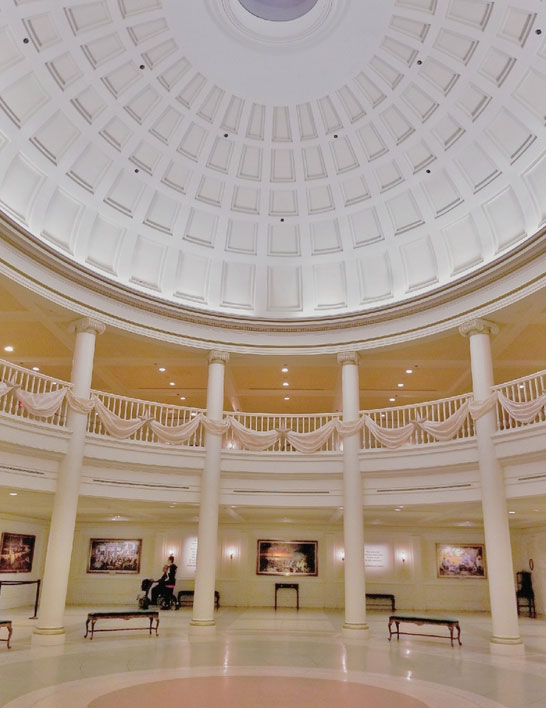 Comprised of eleven different countries, the World Showcase at Epcot is one of the most unique experiences Walt Disney World has to offer. The American pavilion has little popularity, and understandably so, as a great number of people that visit Epcot have already been living in the United States their whole lives.

It’s easy to see why you spend minimal time, especially if no concert series is taking place and if you’re not into a lengthy, albeit amazing, show about American history.

The building that hosts said show, The American Adventure, is a stunner with its marble floors, pillars, and a high rotunda ceiling. It doesn’t have the obvious romantic appeal of the France or Italy pavilions but its feeling of seclusion yet grand all-white wedding appearance fit for an intimate moment with a loved one. 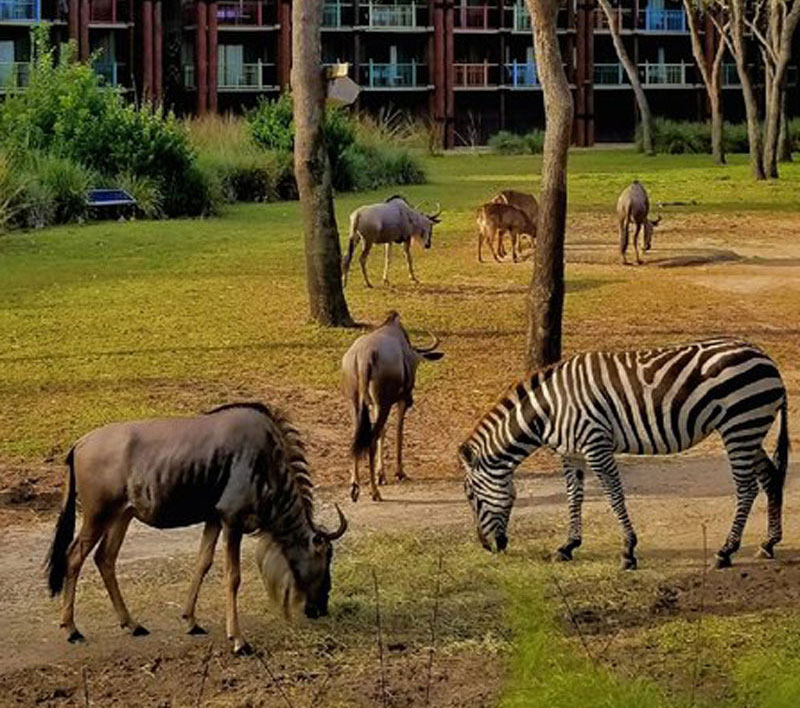 Everyone loves animals and if you don’t then well, to each their own I guess. Proposing surrounded by animals would be a serene moment.

Disney’s Animal Kingdom theme park next door certainly has a lot of cuddly, fun creatures to offer, but with how many people are drawn to the park with the recent addition of Pandora – World of Avatar, you may not get the specific immersive feel you’re going for.

The Animal Kingdom Lodge is a beautiful resort, immensely underrated due to its proximity to the rest of the WDW attractions. The detail that went into that property is astounding. It has savannah views of its own, whether at the Jambo House, Kidani Village, or even from your room.

Animals appear to live such a simple, easygoing life. Surrounded by their presence, taking the time to slow down and breathe easy could allow the right mindset for a beautiful proposal.

3. Waterfall at the Canada Pavilion at Epcot 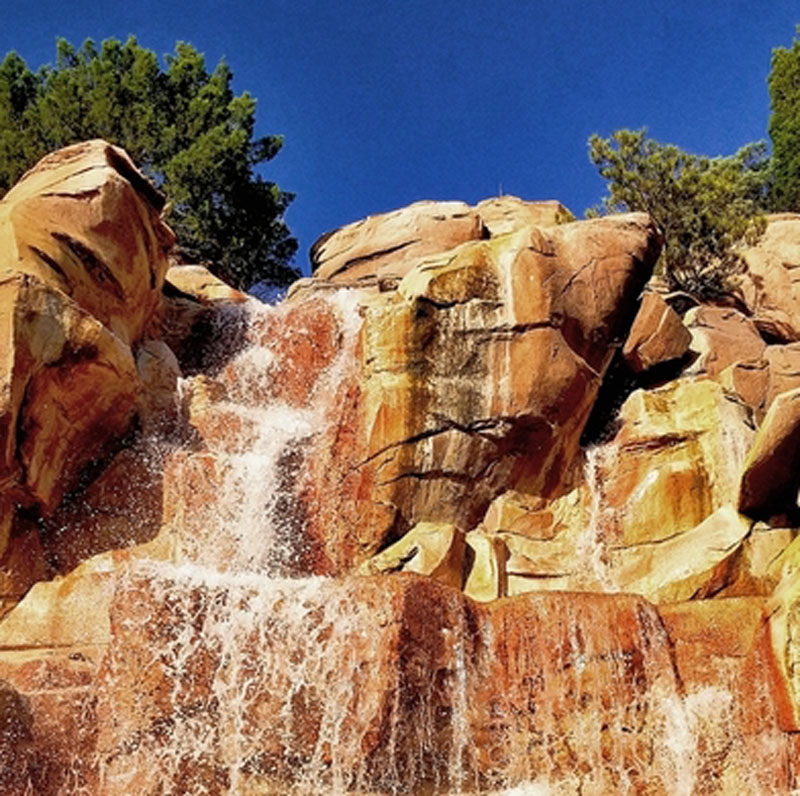 Heading back around the world at Epcot, we stop at another less-than-often visited pavilion. Canada can go overlooked with many passing by to get to the United Kingdom, one of the more popular pavilions.

The two major highlights at Canada include the steakhouse, Le Cellier, along with the 360-degree film O’Canada, featuring Martin Short. On the way to O’Canada, you walk across a bridge between a canyon wall that leads right to a waterfall.

It’s a beautiful and calming sight to stand in front of. Water represents life; two people starting a life together around such a sight would be a nice feeling. 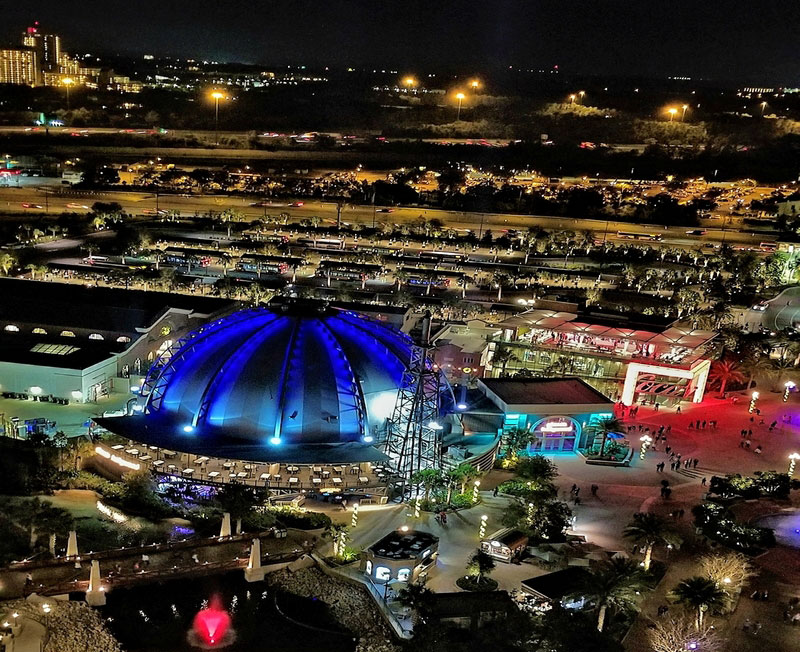 Okay, it’s technically a ride, but what I’m calling a special circumstance.

At 400 feet in the air, the helium balloon at Disney Springs is a breathtaking experience. Even those who are deathly afraid of heights can breathe easier knowing that the balloon is tethered and the fact that the ride is approved by Disney standards. There isn’t a lot of elevation in the state of Florida. This is a chance to experience that Empire State Building moment. You can see up to 10 miles away on a clear day — it’s a whole new world up there. A whole new world that could be started at that moment.

This is a short 8-minute ride so come prepared with what to sweep your loved one off their feet with — pun intended. 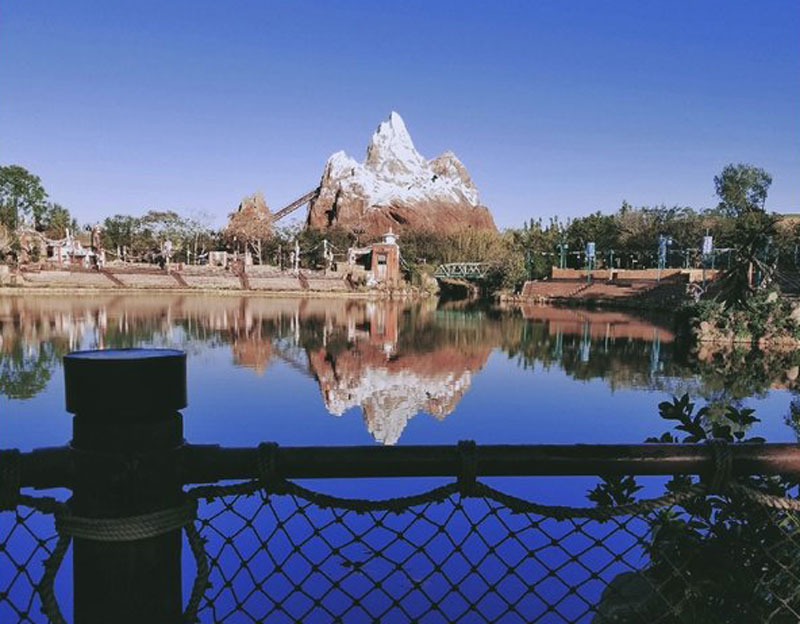 In Animal Kingdom you’ll find the Flame Tree Barbecue restaurant in Discovery Island. When approaching the restaurant, walk to the left side of the building, keep heading straight down a path and you’ll find yourself with a beautiful secluded view of the Himalayan mountain range that is home to Expedition Everest. You’ll find many views of this attraction throughout the park but this one is far and away the least visited, as you would need to know where to go ahead of time or essentially discover it by mistake. You’ll have the feeling of escaping but with all the energy still present.

6. Riad (Interior Courtyard) at the Morocco Pavilion at Epcot 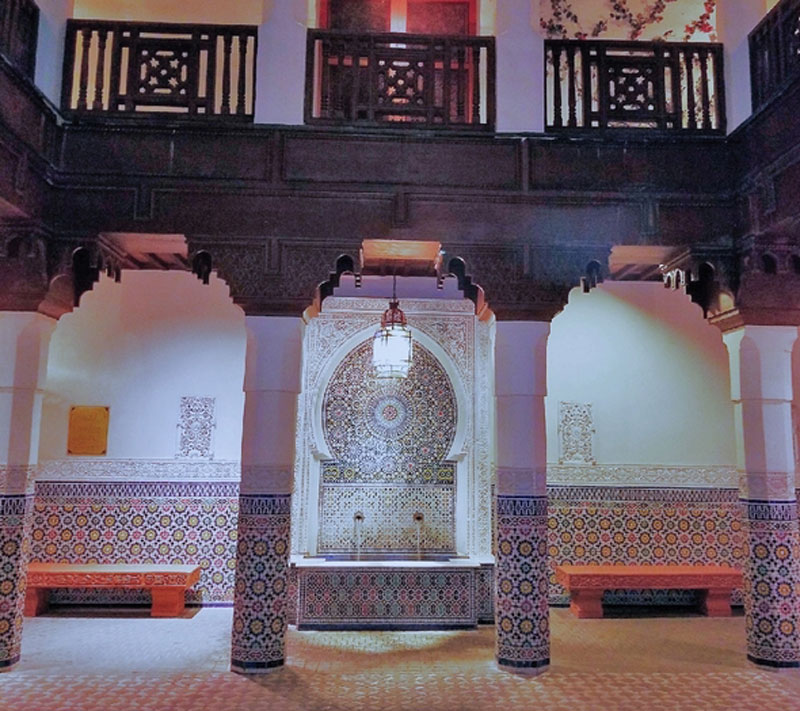 On September 7th, 1984 Morocco was added to the World Showcase. This pavilion lies between the Japan and France pavilions. Morocco is one of the most detailed and lengthy pavilions in the World Showcase. During construction, the Moroccan king at the time, Hassan II, sent skilled artisans to help authenticate many mosaics. It is the only pavilion to be sponsored by a government and not a corporation.

The pavilion, like other Moroccan cities, is divided into a new and old city center, separated by the Bab Boujouloud Gate. As you pass through the gate, to the left you’ll encounter a beautifully crafted riad, or interior courtyard.

The room is filled with mosaics and columns and has a serene yet high energy feel to it. The pavilion as a whole is huge, with nooks and crannies seemingly everywhere. Because this riad doesn’t offer merchandise, food or art, it simply doesn’t sustain foot traffic. It is the perfect place to step away for an intimate moment, immersed in worldly architecture for a truly authentic moment. You’ll then leave the old part of town, crossing under the Bab Boujouloud Gate into the new part of town with newfound objectives and dreams. It really does write itself. 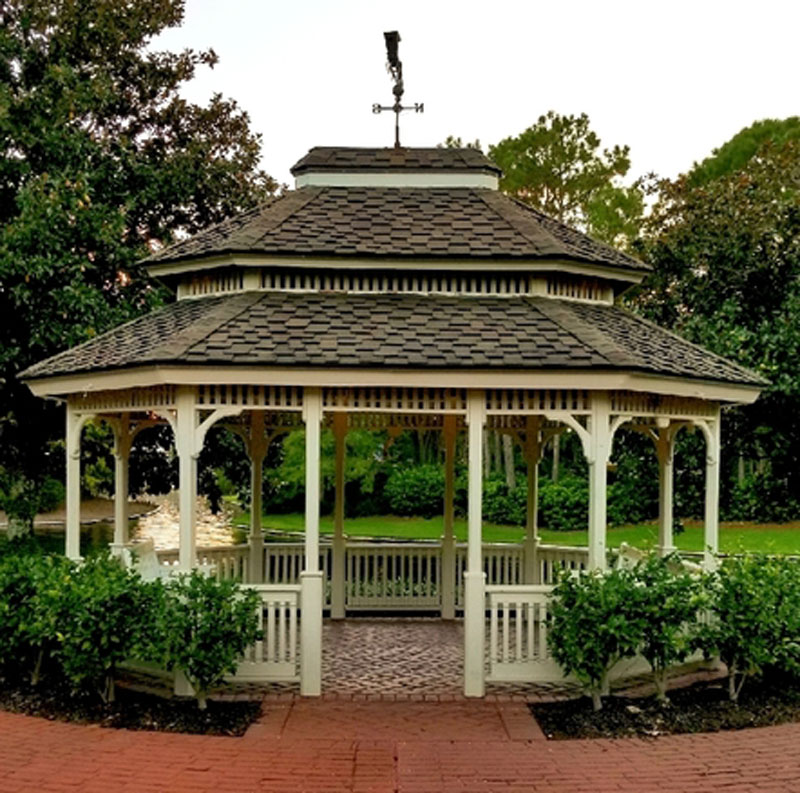 For more information on that resort check out my article The Charming Resort: Disney’s Port Orleans French Quarter on The DIS.

However, today’s spotlight is on Port Orleans Riverside. The resort has an old southern charm feeling to it with seemingly endless opportunities for a special moment with a special someone. I, in particular, love the Magnolia Terrace courtyard. 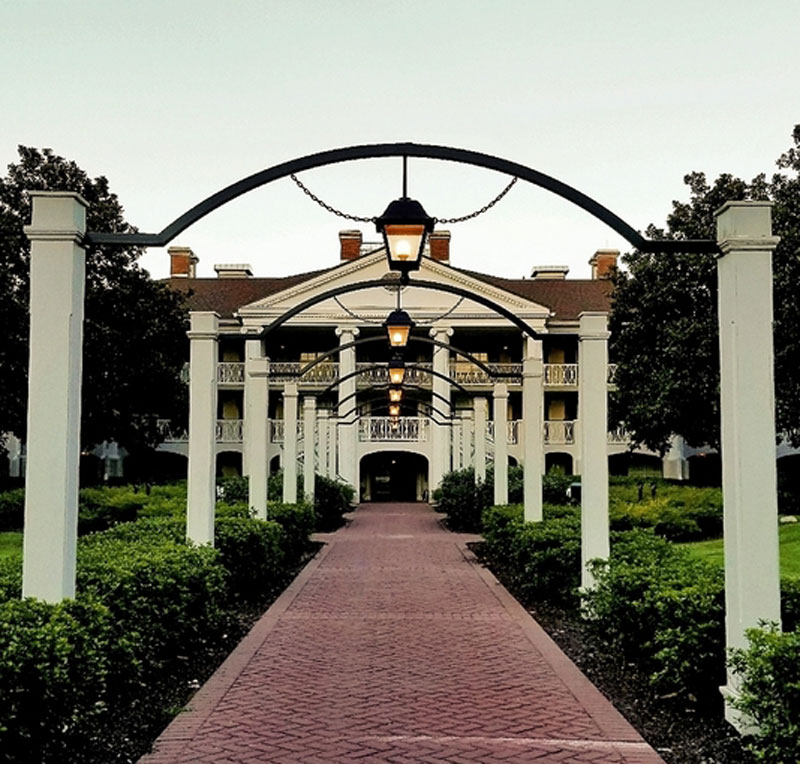 You’ll find this area across the bridge that leads away from the main pool or not towards the main building. It is the first building when heading to the right. You’ll notice the gazebo right away. Being at this spot numerous times throughout all hours of the day, I can say with confidence that sunset is absolutely beautiful here.

The whole Magnolia Terrace area has wedding vibes to it. Its u-shaped staircases leading down from the balcony, the long bricked walkway with perfectly manicured vegetation and hanging lanterns along the way — it creates the perfect setup for a wedding. In fact, this is my personal dream location for a Disney wedding. I’m willing to share, because it’s that special.  It definitely warrants a proposal, a wedding, or both because it was almost designed on purpose to be that way. 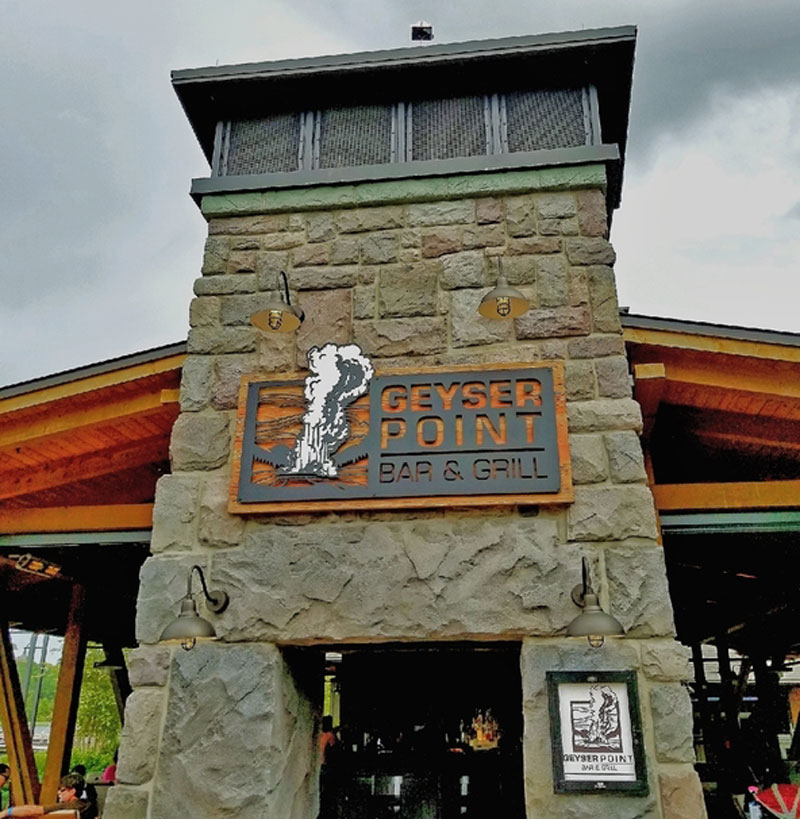 Last stop on my proposal tour takes us to the Geyser Point Bar & Grill, located at Disney’s Wilderness Lodge. One of the hidden gems at Walt Disney World to grab a drink, bite to eat and to relax in this covered, open-air lounge next to Bay Lake.

Just out the back of the bar is an additional seating area and walkway that can offer views of the past, present, and future.

If you look straight ahead you can see the once vibrant, now overgrown Discovery Island that operated from 1974-1999. Many of the same animals on the island you can find to this day at Animal Kingdom. Out and to the right are the remains of Disney’s first water park, River Country. 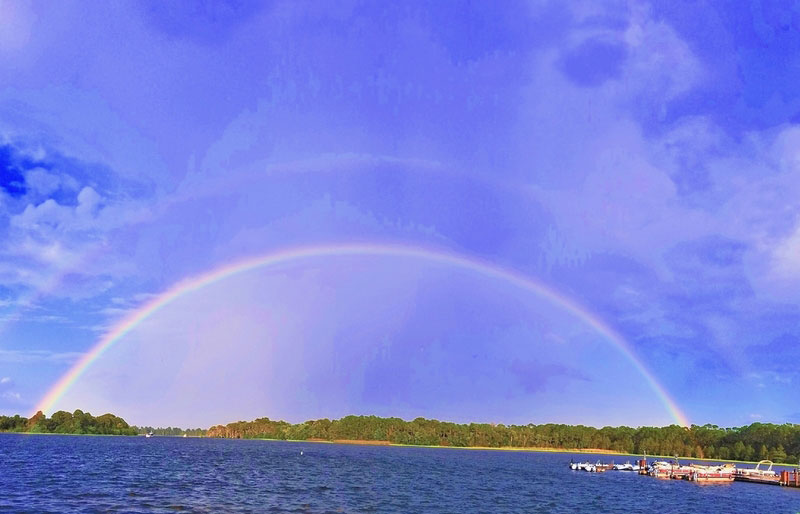 In the present time, you can catch a beautiful sunset overlooking Bay Lake, the Electrical Water Pageant Parade, or in my case the very rare double rainbow.

You can reminisce over the past, take in the present, all while dreaming of the start of a future together with your other half.

You can propose at a World Showcase masterpiece, high above the world, the attraction you met at during your Disney College Program, in front of Cinderella Castle and much, much more.

It’s about finding what’s right for you.

Do you have any unique locations to propose at on Walt Disney World property? Have you already had the chance to propose at Disney? Where at?

To get ideas on where to pop the question in Disneyland, check out The Best Places to Propose in Disneyland – Besides the Castle.