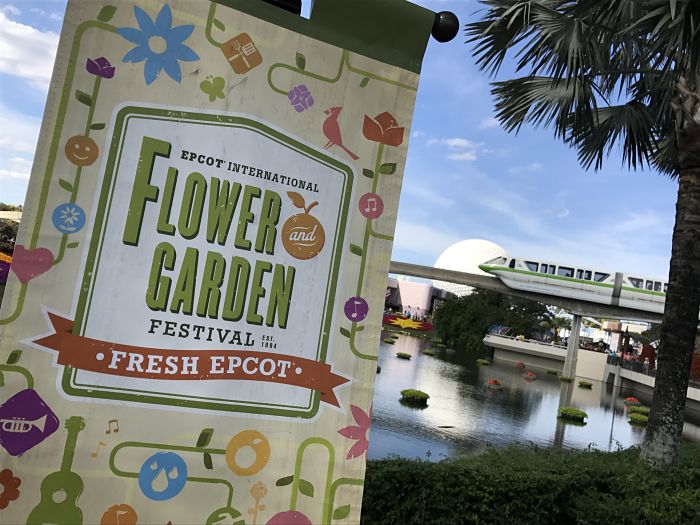 Spring has sprung, and the Epcot International Flower & Garden Festival has begun! This year’s festival runs from March 1 until May 29, 2017. The Epcot International Flower & Garden Festival is an annual tradition at Walt Disney World that shows the beauty of spring with beautiful flowers and topiaries. The festival also includes special outdoor kitchens that serve sample size portions of unique foods!

Coming off of the Epcot International Festival of the Arts, I was worried that we were in store for festival overload and that the fun of festival season would have worn off. I am happy to report that in my opinion, the Flower and Garden Festival still brought fun and exciting energy to Epcot. If you’ve never been to a festival at Epcot, there are 15 outdoor kitchens set up throughout the World Showcase that offer small sample sized portions of food that cost anywhere between $3.75 and $7.50. This year, the new outdoor kitchens are Northern Bloom and The Berry Basket.

At this year’s festival, the food was outstanding! I can’t say I’ve tried everything, but everything I had was exceptionally delicious. It is hard to say what my favorite dish was at the festival. I will say that the Spicy Chicken Lettuce Wrap at the Lotus House, the Smoked Pork Ribs at The Smokehouse, and the Potato Pancake at the Bauernmarkt Farmer’s Market stood out as dishes that I recommend as must try items. These three dishes in particular were so delicious that I will make sure I go back to try them again.

My favorite dish from last year’s Flower and Garden Festival was the Beef Teriyaki Udon. While it was still just as good as I remember it, I have to say, the three dishes listed above were far and away much better. The Spicy Chicken Lettuce Wrap for $5.95 is a little messy, but don’t let that prevent you from trying it. The chicken is seasoned perfectly, and it left my mouth salivating for more. I believe the Pork Ribs were there last year too, but I must have missed out on them. For $6.75 you’ll get two full ribs, and if they are anything like mine, they’ll be extremely tender and packed with meat. Lastly is the Potato Pancake, which was probably the best deal of the day, costing $4.25. The Potato Pancake was served with caramelized ham, onions, and herb sour cream. With this dish, it is important to get a little of everything on your fork because the combination of flavors is delicious. The only dish I wasn’t a huge fan of was the Lamb Chop dish found at The Berry Basket. I usually am a huge fan of the Lamb Chops from the Epcot festivals, but the combination of blackberry gastrique, quinoa salad, and lamb didn’t pair well in my opinion. It was also one of the most expensive dishes at $7.25.

I didn’t notice any mishaps this year. In past years or other festivals, Disney has a few moments where they act out of character. For example, last year at one point they ran out of food at some kiosks. This was a huge deal, but it was nice to see that they’ve seemingly gotten better at making things run a little smoother. I am not gardener, so I can’t say this with an educated perspective, but from an average Joe perspective, I can confidently say that the flowers and topiaries were beautiful. Epcot has alway done an outstanding job putting together the Flower and Garden festival. The entire park has an entirely new energy because of the flowers and topiaries. There seemed to be so many topiaries this year. Maybe it was short term memory, but it seemed like everywhere you turned in the World Showcase and in Future World, there were topiaries everywhere. The festivals at Epcot bring something special to the park. There is just so much more to do and see, and this is particularly true for the Flower and Garden Festival. Everywhere you turn, there is either an outdoor kitchen, a fun new topiary, or cool new merchandise! Epcot is increasingly becoming a park with constant festivals going on, and I for one have no problem with that. The atmosphere is kicked up a notch during these events. I will also add that cast members don’t like the monotony of their jobs, and the festivals are something new and exciting that can get them out of that rut. This is important because the better mood the cast members are in, the better the service the guests receive. The Garden Rocks Concert Series is back! This year’s performers are Jon Secada, Dennis DeYoung featuring the music of STYX, The Pointer Sisters, Simple Plan, Plain White T’s, Night Ranger, Little River Band, Blood, Sweat and Tears featuring Bo Bice, Gin Blossoms, The Orchestra starring former members of ELO, Exposé, Berlin featuring Terri Nunn, STARSHIP starring Mickey Thomas, The Guess Who, Herman’s Hermits starring Peter Noone, and The Spinners. This is a popular concert series, so if you are interested in dining packages that include good seating for the concert, you’ll want to book them as soon as possible. The Festival Center, located in what was the Wonders of Life Pavilion, is open on Fridays, Saturdays, and Sundays. The Festival Center has special festival merchandise, special gardening and horticulture demonstrations, and the Garden Theater which plays a short video about how Disney puts the festival together every year.

Although it was extremely hot and humid, overall the first day of the 2017 Epcot International Flower and Garden Festival was a huge success.