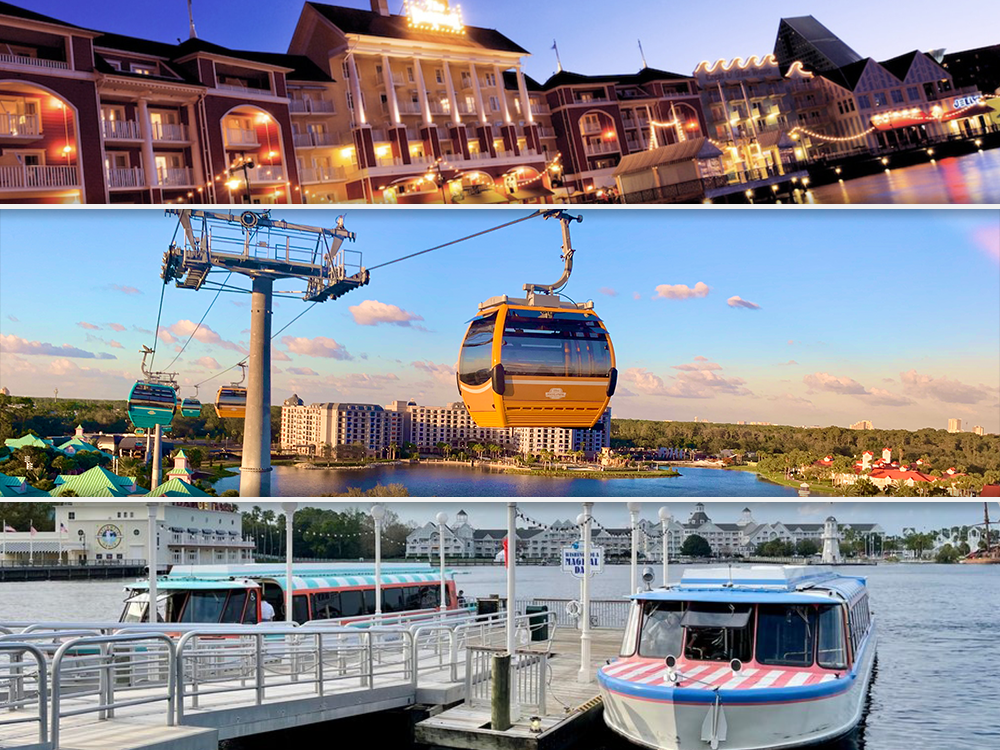 Choose Your Own Adventure. I love those books, you get to choose which path you want the story to take you. It reminds me of the movie Clue, and at the end, there are surprise different conclusions to solving the murder. At Walt Disney World, going between Epcot and Disney’s Hollywood Studios reminds me of these experiences because there are several ways of going back and forth between the two parks. What is your favorite path?

There are several choices for traveling between the main entrance of Disney’s Hollywood Studios to Epcot’s International Gateway. It is an experience, and you get to decide the best way for you and your travel companions. During one visit, however, in the pouring rain, we were just lucky a bus was available returning to our Epcot resort because two of the options were suspended. But on a beautiful Florida sunshine day, it is a real treat to choose.

I love the walking path in the early morning. Our family has done this recently from the Yacht Club Resort, which is at the edge of Epcot. I do not love this path option on a hot Florida mid-day afternoon, though. The walk is approximately 15-25 minutes, depending on the pace of your party. You have to figure that if you are in Epcot, you need to walk the path from wherever you are within Epcot itself to get out of the exit, which takes a few minutes. Suppose you are in the Mexico Pavilion, for example, and want to walk to Disney’s Hollywood Studios. In that case, it’s quite the shlep exiting the International Gateway, then walking to Disney’s Hollywood Studios. I have done this to the Boardwalk and can’t imagine doing the path further to the next park if I don’t have to. But you can get those steps in if you want! On the path, there is proper signage; however, many years ago, we walked this at night, weren’t familiar with the path, and really didn’t notice the signs. It seemed like forever, and we thought for sure we would get lost, which was not possible, but it felt that way.

The best part of the walk is the views. Travelers pass several resorts, Crescent Lake, the Boardwalk (several restrooms if you need them within the resorts and at the entry/exit of the parks), the Skyliner, and boats. It is also super calm, with not many crowds and quiet. Need to stop off for a drink on your walk? You can do that! There are a few places on the Boardwalk and within the resorts that if you need to stop inside, you may do so, including some new experiences to come, including some new food options!

A leisurely, slow boat ride to and from Epcot’s International Gateway to the entrance of Disney’s Hollywood Studios may not be the most expedited way to get to and from both parks, but it is an experience. The boats offer indoor seating and a small outdoor bench. They make several stops along the way, including several of the Boardwalk Resorts and Disney’s Boardwalk itself. The boats run along Crescent Lake and are a complimentary mode of transportation. They do not run during inclement weather. I enjoy the boats from time to time, but when I see a line to board them or feel impatient with more energy, I tend to want to walk to take the Skyliner System. I also find the smell of the diesel to make me feel somewhat ill, and they tend to be stifling hot inside.

The Disney Skyliner System will take you in an aerial gondola to and from Epcot and Disney’s Hollywood Studios. Opening in 2019, the Skyliner is located right outside Epcot’s International Gateway and glides you to the entrance/exit at Disney’s Hollywood Studios, which includes transfers. Still, it’s easy with Cast Members assisting and great signage. They are complimentary; no need for a park ticket or reservation, and they will take you back and forth, weather dependent. Within minutes you will can hop to each park! The Skyliner is not air-conditioned but has open air, and breezes come through; you are also high in the sky, so be prepared for that experience. It will move about a bit when windy.

What is the fastest way to get to and from? It is debatable. It depends on crowds and the time of day. Mornings at the Skyliner for park opening can be crowded. And everyone’s walking pace on the path is different too. Weather can suspend your choices. But for me, the best mode, hands down, is the Skyliner. On a recent vacation, I used all three experiences, and each one I enjoyed, choosing them depending on my mood and time of day back and forth to the two parks.

Tell me about your experiences and favorite way to travel between Epcot and Disney’s Hollywood Studios.