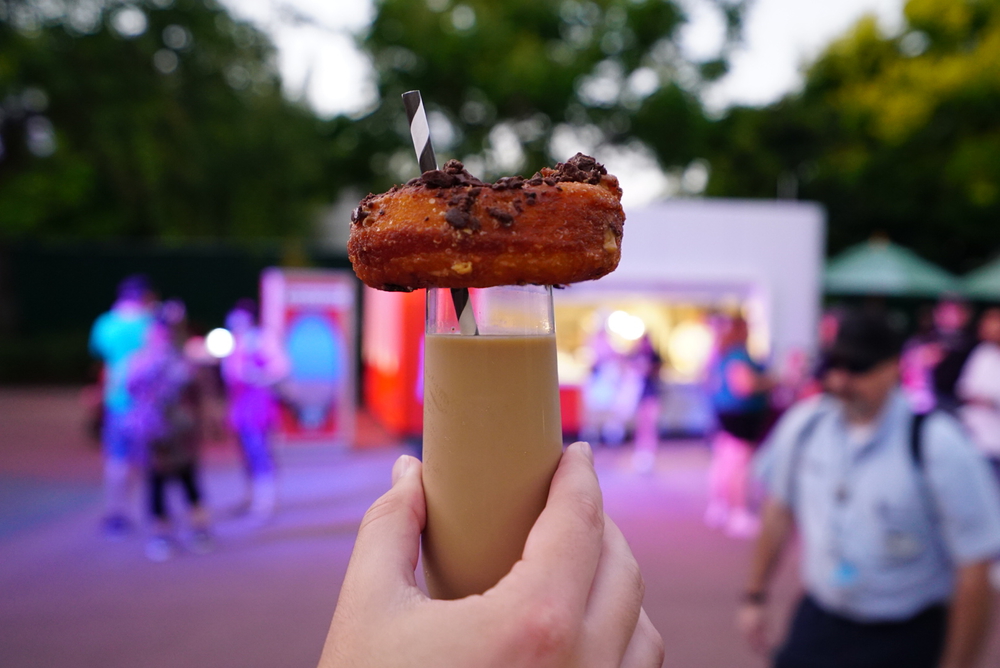 There are some new sweet treats being offered at Epcot these days, and Steve Porter, Ryno Clavin, Corey Fiasconaro, and I stopped by on the day that they debuted to check them out. 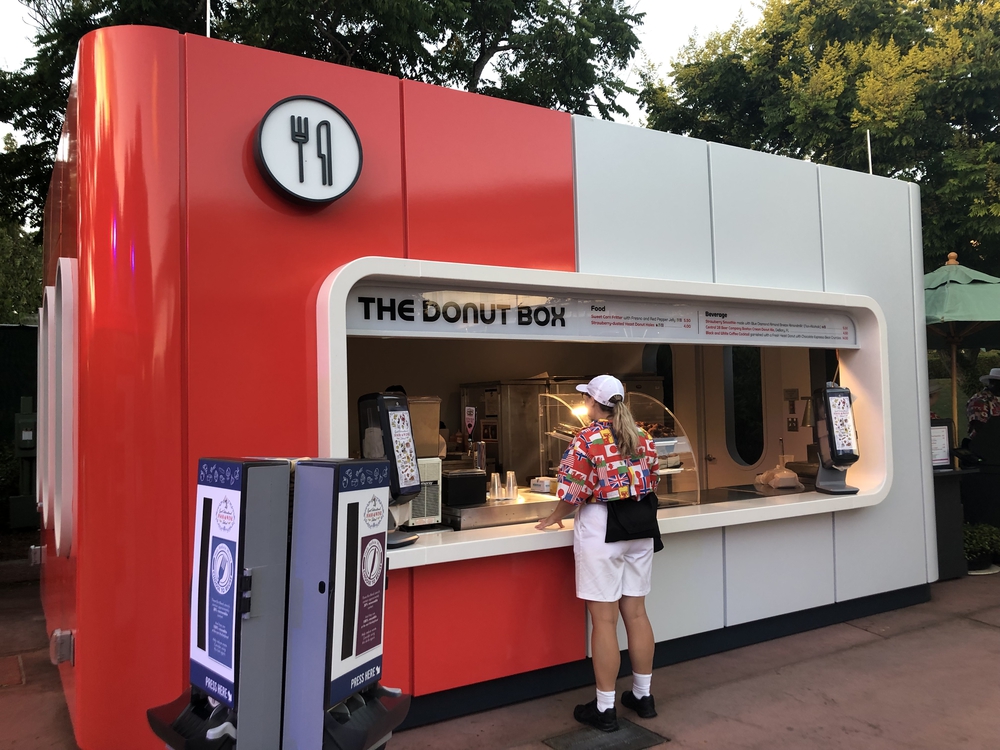 The Donut Box is new for this year‘s Epcot International Food and Wine Festival, and opened on October 1st. The Donut Box is located near Test Track in Future World East. 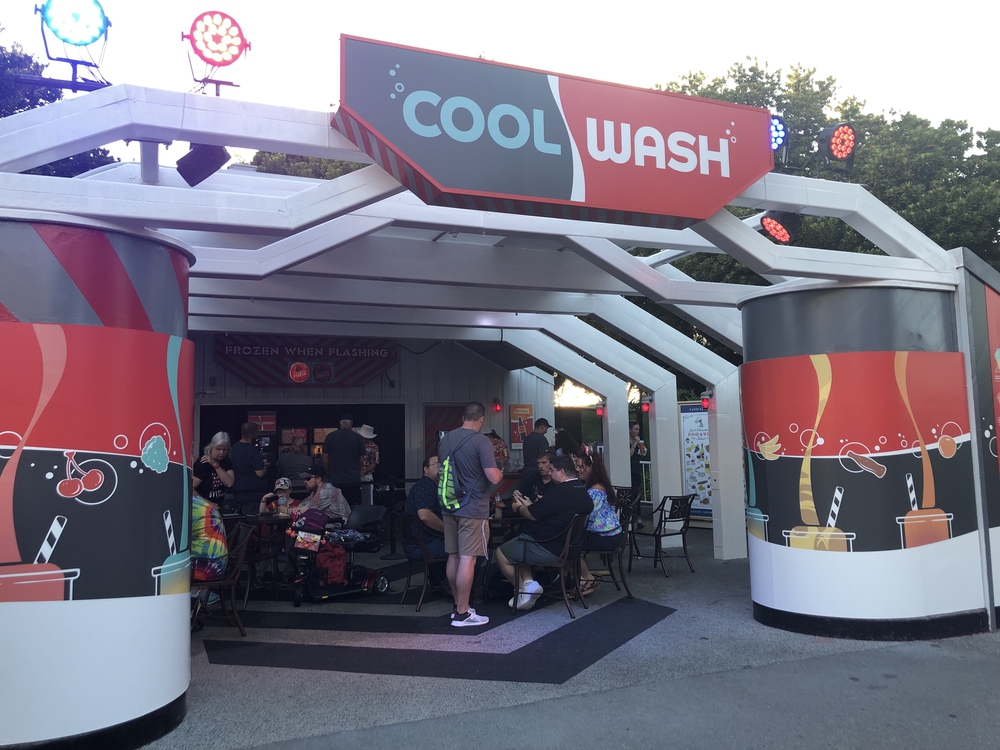 The next door neighbor of The Donut Box, Cool Wash, introduced brand new layered slushies on October 1st as well.

True to its name, The Donut Box features donuts and donut-flavored drinks. We tried both the Sweet Corn Fritters and the Strawberry-dusted Yeast Donut Holes. The Sweet Corn Fritters are served with a Fresno and red pepper jelly, and you get 4 fritters for $5.50. The Strawberry-dusted Donut Holes are quite large, and an order of 4 donut holes sells for $4. 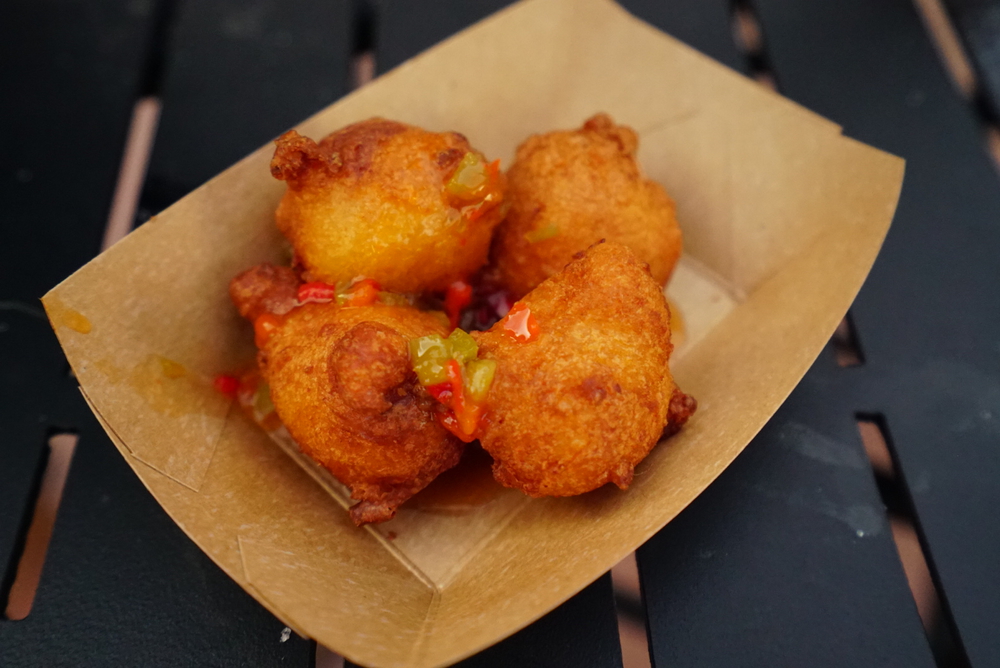 The fritters were an interesting and savory option for guests who might not really enjoy a sweet donut. They had a corn bread consistency, and featured whole pieces of corn inside of the fritters. The jelly that they are paired with is somewhat flavorful without being too spicy, but all in all, the fritters fell a little bit flat. They were good, but are not something that I would necessarily purchase again. 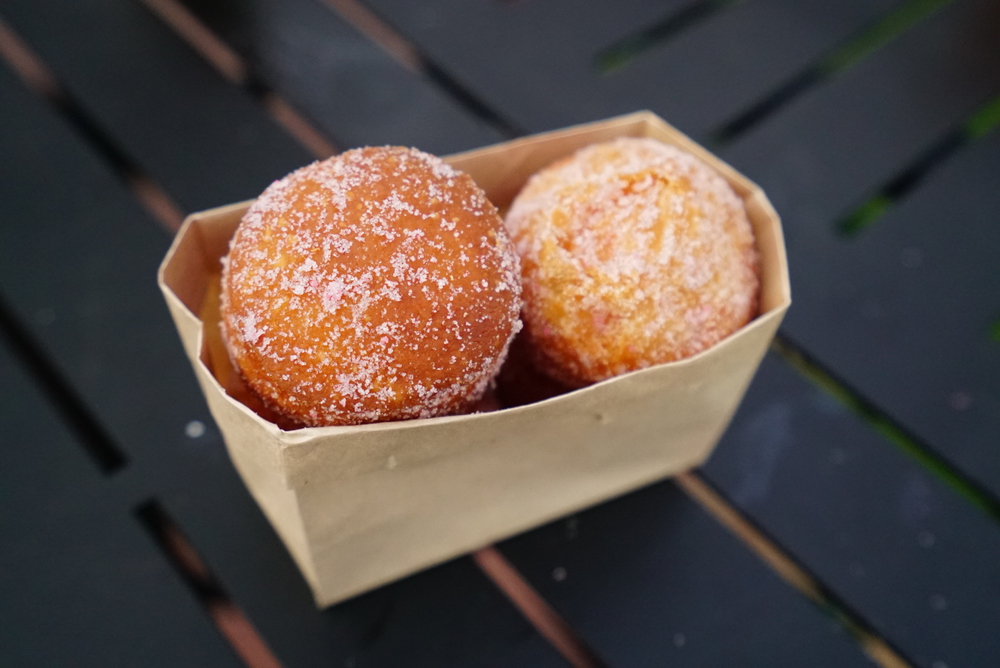 The donut holes were huge in size, but not as huge in flavor. They were good, just not fantastic. They were covered in light pink sugar that only lightly tasted like strawberries. I do wish that the strawberry taste was more vibrant (Sunshine Churros, I’m looking your way on this one), but we did enjoy this snack item the most among the snack offerings at The Donut Box. They were fresh, and fluffy, and while I wish they packed more of a punch, if I was craving donut holes one evening while touring the park, I would purchase them again. 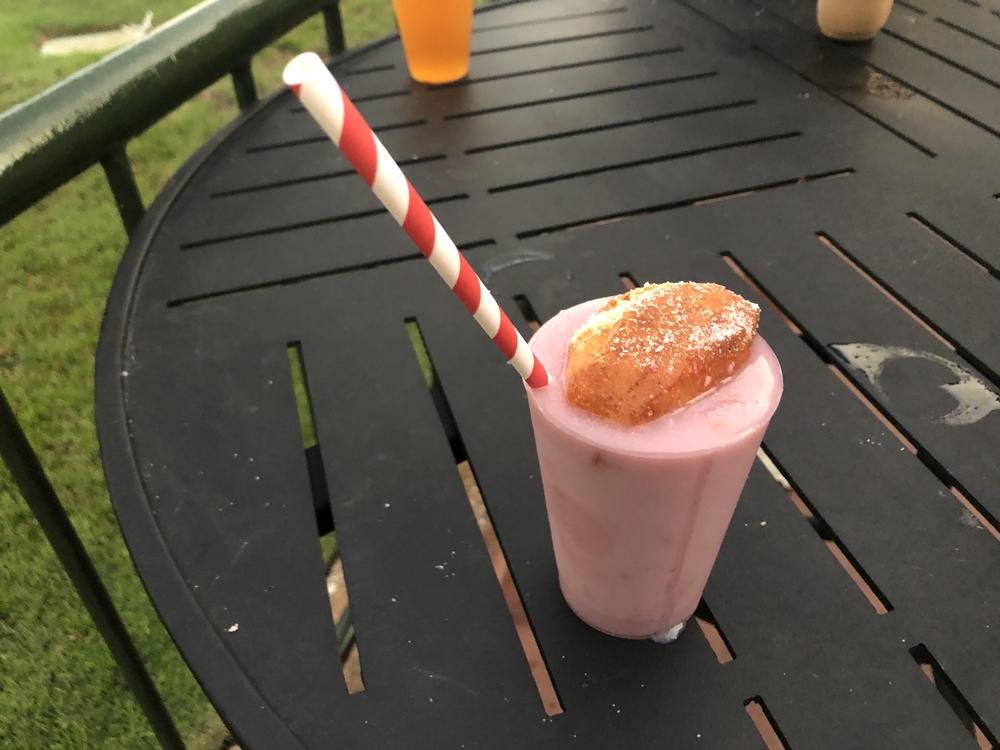 The Strawberry Smoothie that’s available at The Donut Box is made with Blue Diamond Almond Breeze Almondmilk, and sells for $5. It comes with a yeast donut hole, but Fiasco said that this donut hole was not as fresh as those that come in the 4 pack. All in all, this smoothie was a hit. It was creamy and cool and reminded me of a strawberry version of the Orange Cream Slushy that came in the Orange Bird Sipper that was available earlier this year at the Epcot International Flower and Garden Festival. 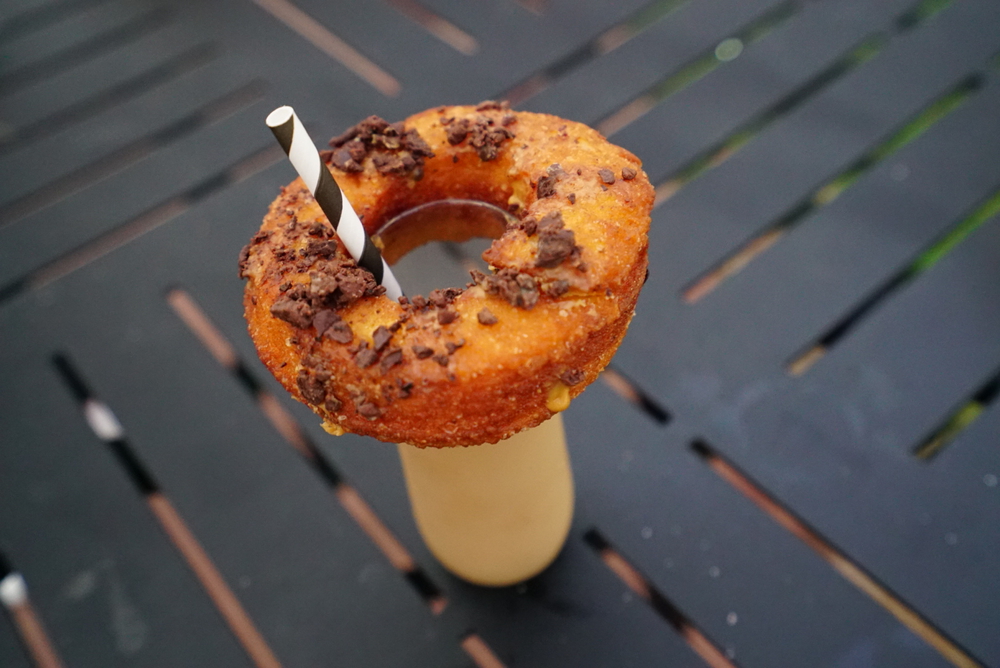 The Black and White Coffee Cocktail is paired with a yeast donut topped with chocolate espresso bean crumbles, and sells for $14. The cocktail did not truly impress Ryno and Steve. The donut, while being good, was not great. The chocolate espresso bean crumbles were a nice touch, but did not prove to be enough to offer flavoring for the entire donut. The donut consistency was tougher and not as fluffy as the donut holes. The cast members at the booth confirmed that, although it is not being advertised, guests may purchase the donut separately for right around $4. 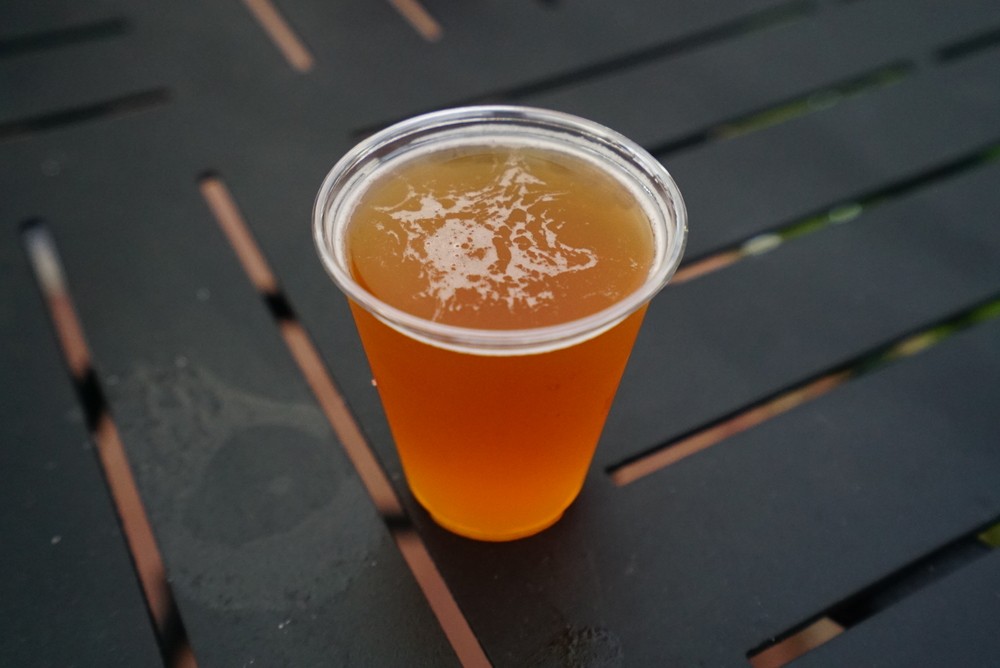 This location also offers Central 28 Beer Company’s Boston Cream Doughnut Ale for $4.50. This beverage was enjoyed by both Ryno and Steve, but the comment was made that, while it was a good beer, the donut taste could’ve been a bit bolder. 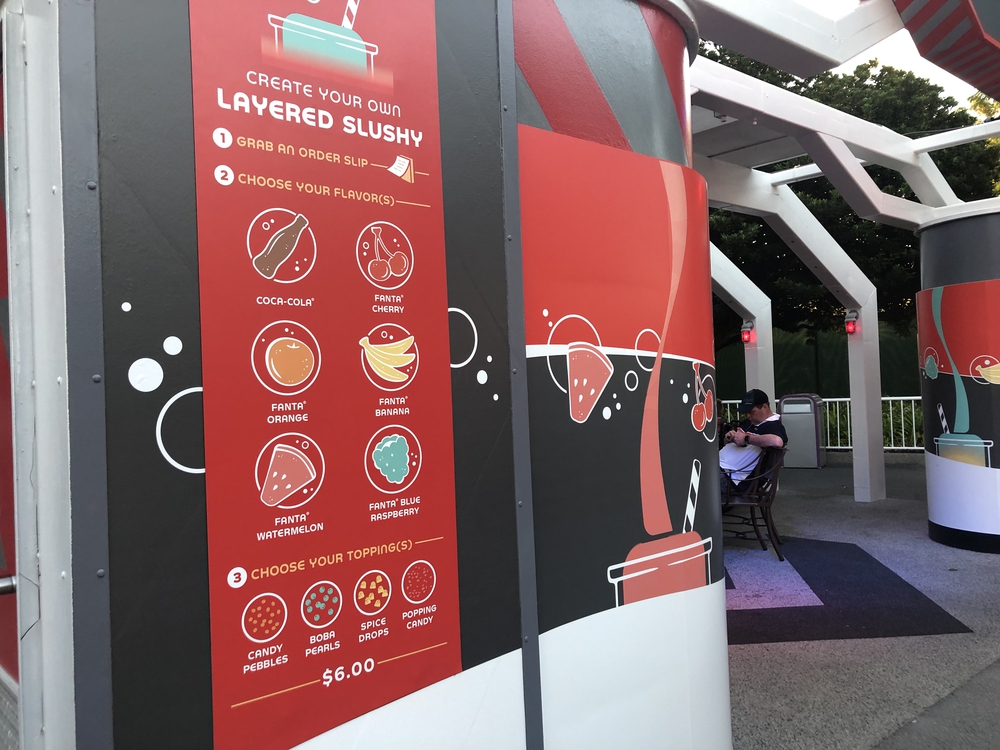 After our dessert of donuts, we decided to have even more dessert! We stepped over to Cool Wash and tried their new layered slushy options. There are six flavors available for you to choose from: Coca-Cola, Fanta Cherry, Fanta Orange, Fanta Banana, Fanta Watermelon, and Fanta Blue Raspberry. You can choose to top your slushy with candy pebbles (think Nerds), Boba pearls, spice drops, or popping candy (Pop Rocks). 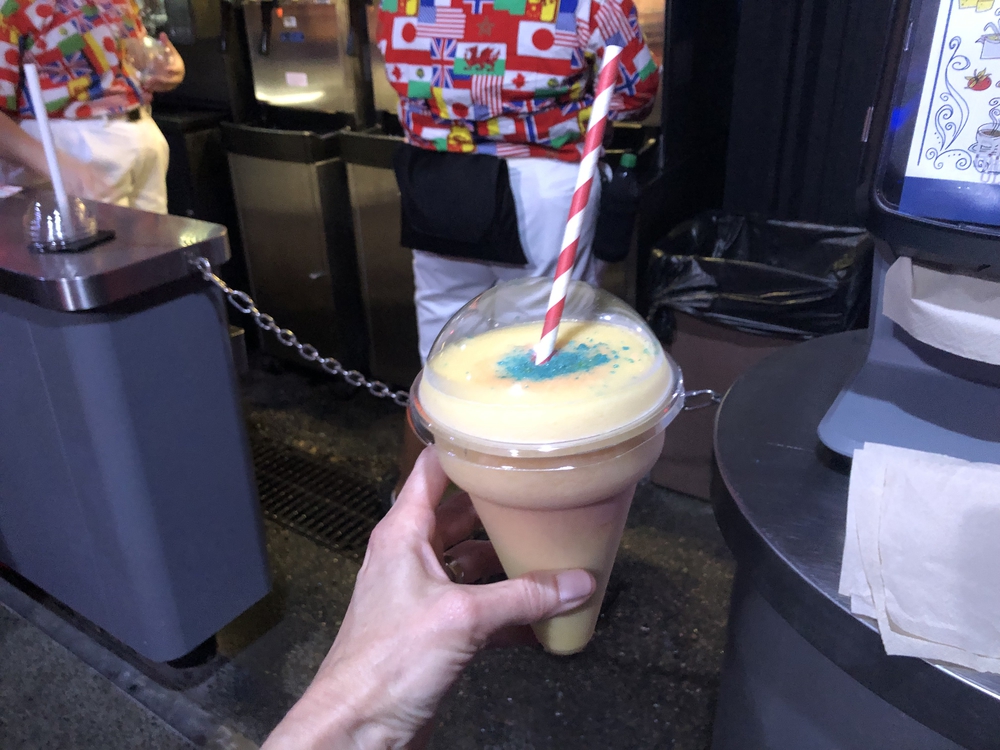 For my slushy, I chose Fanta Orange, Fanta Banana, and Fanta Cherry. I topped it with Pop Rocks because I’m a child of the 80’s and I like living life on the edge. Ahem. The slushy was delicious. I loved the Fanta Banana flavor, and I thought it was a bright, fresh flavor and did not taste overly artificial. You can choose as many flavors as you’d like for your layered slushy, and you can choose as many of the topping varieties as you would like. The slushies sell for $6, and are the perfect thing to cool you down on a hot Epcot day. Keep in mind that they are also jampacked with sugar, so sharing your slushy with a friend might be a good idea.

Cool Wash also offers a Coca-Cola Orange Vanilla beverage with St. Petersburg Gin for $13.50, and a new drink that features Jack Daniels, as well as one that features rum, will be introduced in the days ahead.

The comment was made that if you choose Boba pearls as the topping for your slushy, they might have a hard time getting up the straw. Be ye warned. The comment was also made that the slushy portion size, while being good for portion control, could have been a bit larger for the price.

It was great to have even more new snack options available at Epcot. I’m always up for trying a new one, especially when sugar is involved.

You can watch Steve, Ryno, Fiasco, and I sample all that The Donut Box and Cool Wash have to offer below: