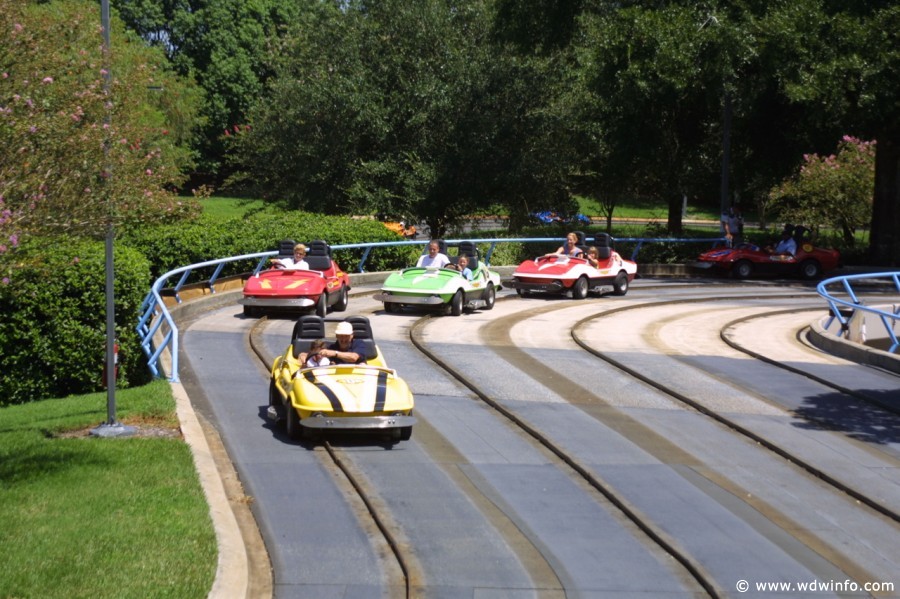 An interesting conversation is taking place over in the Rumors and News forum on the DISboards about the possibility of the Tomorrowland Speedway at Magic Kingdom Park being on its way out. Now, like the title of this piece says, this is nothing but a rumor, but it’s fun to imagine the possibilities of what could happen.

Poster ‘luisov‘ says, “It’s being demolished in both Hong Kong and Tokyo, and if they were to expand Paris’ Tomorrowland in the future, it would likely go away over there as well. I’m sure they have considered the possibility of getting rid of the American versions as well, though with the Honda deal going on in California, we’ll have to wait and see.
I personally believe that the Tomorrowland Speedway occupies a lot of space, it’s noisy and smelly, and you can find something similar in many local parks around the country. I wouldn’t mind if something else was being planned for that space.”

Poster ‘Roxyfire‘ adds, “There’s plenty of concepts that are great for both audiences. The speedway doesn’t even have to be replaced but it most certainly needs an update to the vehicles at the bare minimum. This is a good, small-scale opportunity for imagineering to really wow us.”

Finally, poster ‘Gastonecrosse‘ says, “I would be more than happy to see Tomorrowland Speedway be replaced. I have never been a fan (especially of the smell) of the attraction, especially of the odd aesthetics of a non-futuristic kart track next to the tea cups. As others have said, to say there are a plethora of other superior karting options is an understatement.
I do also feel I need to say my concept of a kart attraction in a Disney park was changed drastically when I visited Disneyland last year. The difference between Autopia and Tomorrowland Speedway is drastic. While there are many alternative simple (or complex) kart tracks around, I have never experienced one like Autopia where I can enjoy karting through green landscapes. To get an idea simply look at satellite footage of the two; Autopia is a lush green while Tomorrowland Speedway is a concrete jungle.
Obviously children (and adults – myself included) enjoy karting attractions, so I find myself in favor of the suggestions to replace it either with a Sugar Rush theme or a Tron theme (depending of the Fantasyland / Tomorrowland presence). I don’t even care if it was simple skinning changes as long as the ride got a bit of flavor over simply karting on concrete.”

It seems that the majority of posters would love to see the attraction updated rather than demolished although some say that a Tron attraction would be fantastic and would fit right into the Tomorrowland theme.

What if the Disney Imagineers did a complete makeover with Pixar Cars and used electric vehicles? Can you imagine? The little kid inside of everyone would lose their minds! They could have characters from not only the first two films, but they could add in the new ones from Cars 3 too!

What are your thoughts about this rumor? Would you like to see it come to fruition? Let us know your thoughts in the comments below!