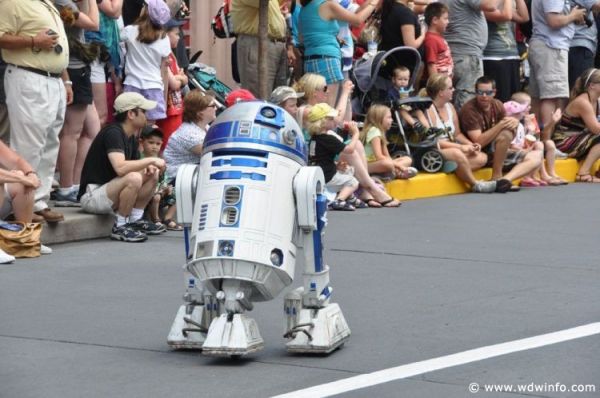 The Star Wars movies are an incredible example of cinematic advancement. Or at least that’s what I hear. I have never actually watched an entire one. I think once I made it ten minutes in before falling asleep. That’s got to count for something.

My husband is big fan of the films. He knows all the movies, plots and characters. Except for the time I called a Gungan “the kangaroo lizard looking guys,” he is very tolerant of my lack of knowledge. No divorce planned for my lack of confusion about, “it’s a trap.” With him being such a fan, and us being annual passholders, he wanted to attended Star Wars Weekends at Disney’s Hollywood Studios.

So if you, like me, find yourself at this event, here are some tips to help you get through it, and even enjoy yourself. 1. Dealing with the inside jokes

There is going to be lots of things you won’t understand. Don’t let this make you feel excluded.

During the pre-show of ” Stars of the Saga of Star Wars celebrity talk show ” they have big screens set up with polls on them. The audience could text in their answer and it showed the votes up on the screen. This pre-show was the most worked up I have seen a group of people in a long time. One of the questions was ” Who shot first?” My husband was on one side of me, and another man on the other. Both men immediately screamed their answer at the screen. The last time I saw my husband answer a question with such certainty was our vows. Of course I had no idea what the question was regarding. I wondered, whoever those people were, how can there be confusion who shot first? The crowd was siding towards one person, so I decided to vote for the other guy. That’s my tip for this type of situation. Just because you don’t understand the context doesn’t mean you can’t participate. We aren’t talking life or death here…well maybe fictionally we are, I still don’t know if someone actually died in regards to that “shot.”

Have some fun with the situation. I wouldn’t recommend going against a biker for giggles, but I’m pretty sure nothing is going to happen to you in Disney World. Well, maybe some dirty looks, but you stand strong on your vote. After all, you have a solid three seconds invested into this decision, and you are sticking with it. We got to see Warwick Davis talk about his Star Wars days as an Ewok. As a non-Star Wars fan that didn’t really interest me, but as a Harry Potter fan, seeing him did. If you are thinking of skipping the celebrity talks, don’t. The actors talk about their entire careers, and not just Star Wars. You may be surprised to see one of your favorite actors up there on stage. I know I was.

Also they might say something about the filming process that will really interest you. I may not be interested in Star Wars, but I love hearing about behind the scenes stuff. I learned all about costumes, casting, and back stage secrets. Those things are universal, and I can apply them to the movies I am interested in. So can you. Just because you don’t know a character, doesn’t mean you can’t appreciate the hours of work these fans put into their costumes. Some of them are truly amazing pieces of art. Ok, some look like a kindergarten student made them with crayons and tinfoil, but with that being said, you can’t help but see the love they put in it. These fans truly loved this series. Getting to be somewhere surrounded by people being part of what they love is amazing. With all the bad stuff that’s happening in the world, being surrounded by joy is refreshing. I love seeing the huge smiles on people’s faces when they see their favorite characters. It’s music to my ears hearing people talk so passionately about something they love, and it feels so nice that they are more than willing to share that with you. It’s an amazing experience.

All in all, you’re likely to find yourself a little confused at times, but just go with it. People will be more than happy to answer any questions you might have. You never know it might make you want to watch the movies. We could bump into each other wearing matching R2D2 t-shirts next year. Now if I can only figure out which one he is.