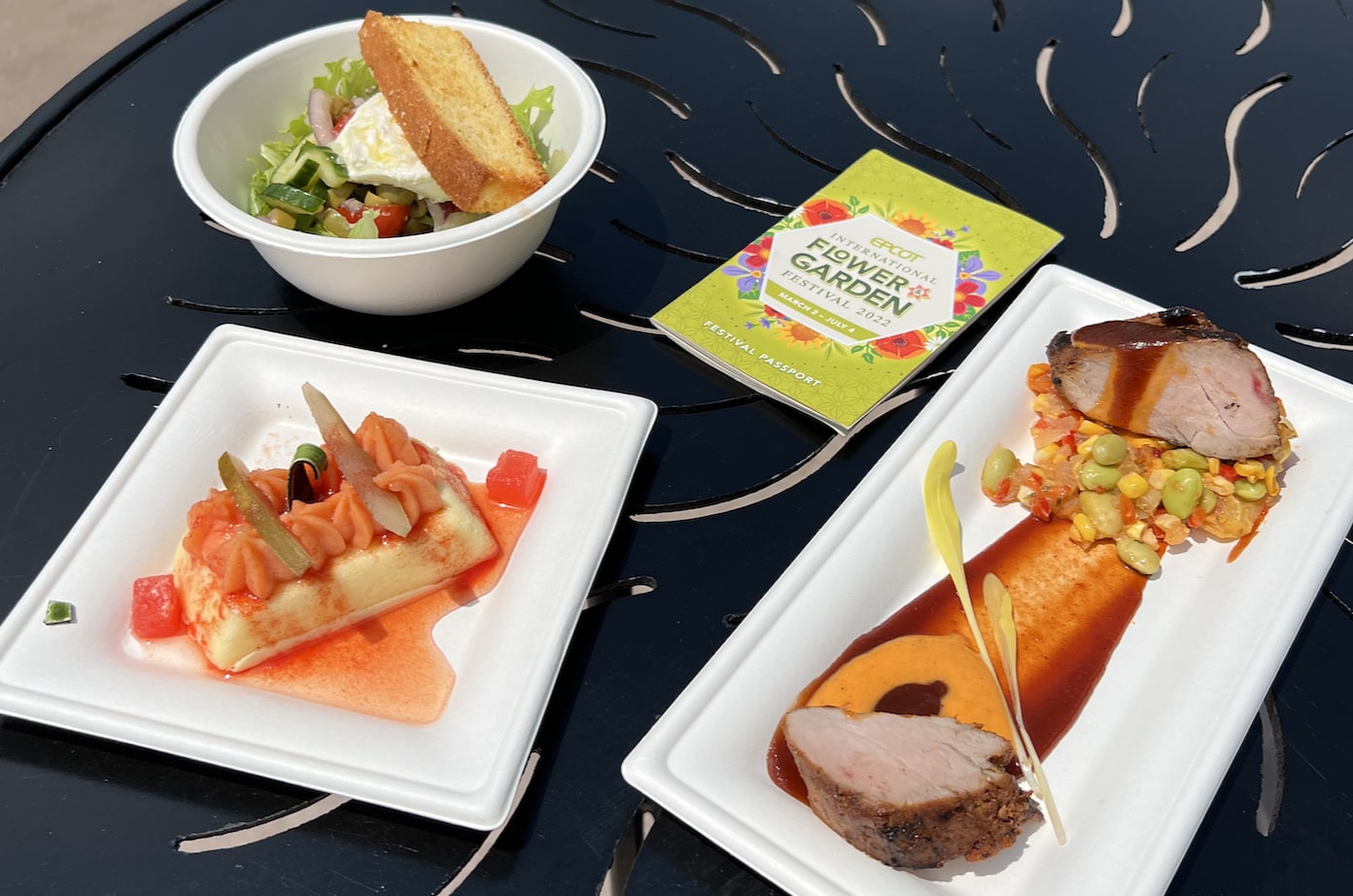 What’s not to love about a rotating menu? There’s always something to look forward to when things periodically change, and with EPCOT festivals lasting longer these days, I’m glad that seasonal menus are being offered at one of Flower and Garden’s Outdoor kitchens. I recently made a stop by the EPCOT Farmers Feast booth to give their Summer Solstice menu items a try. Join me as I taste my way through the three newest additions to the menu.

As has been the case throughout the festival, the booth is currently offering three items that can be identified as appetizer, entree, and dessert. The third and final menu for this year’s booth is: Tomato and Cornbread Panzanella ($5.25), Barbecued Seared Pork Tenderloin ($6.50), and a dessert called A Whole Lotta Melon ($4.50).

First of all, I’d like to give a virtual high-five to the EPCOT team for offering a rotating menu. It keeps us guessing and offers returning guests with a little something different to try. They have to walk a fine line between making sure that guests’ favorites are available and making sure that offerings don’t grow stagnant. We Disney parks fans can be a funny and fickle bunch; thank you for trying.

Let’s get to the food. I decided to go in order and begin with the item that can serve as an appetizer: the Tomato and Cornbread Panzanella. I love bread, including stale bread in a salad, which is what typically is featured in a Panzanella. Instead of a piece of stale bread, very toasty piece of cornbread is substituted instead. And friends? That cornbread is incredibly good. It’s rich and buttery, and it’s the standout of the dish. This Panzanella, however, is incredibly salty. I can’t stress this enough. If you’re sensitive to sodium, this is going to send you right through the roof. Also, this Panzanella is very heavy on the olives. If you don’t like olives, you might want to steer clear of this one.

The Barbecued Seared Pork Tenderloin was next up to bat, and if we’re going with a baseball analogy, this one hit it out of the park. It was a grand slam home run (sorry, had one analogy left), and I highly recommend this dish to anyone who is walking in the vicinity of Farmers Feast. At $6.50, this is a steal. You get two thick pieces of pork tenderloin that are perfectly prepared. They’re moist and smoky, and simply delicious. The succotash is heavy on the edamame, and the veggies used in the succotash have a bite to them, meaning there are no mushy ingredients happening here. This is not your mom’s succotash. Unless your mom makes a really nice succotash, that is.

The Summer Solstice menu wraps up with a dessert that draws on the fresh, farm-inspired side of things. A Whole Lotta Melon features a feta cheesecake, watermelon curd, pickled watermelon rind, watermelon caramel, and compressed watermelon. When the festival began, the desert du jour was a creamsicle pop made of goat cheese. That was a departure. This one? A bit less so. That being said, my least favorite portion of the dessert was the pickled watermelon rind. It just wasn’t incredibly edible. I mean, I ate it, but I don’t need to again. This dish was good, and the taste was mild (I think I would’ve enjoyed a little bit more of the watermelon caramel), but it’s not something I feel that I need to purchase a second time.

The standout of the EPCOT Farmers Feast Summer Solstice menu? The Barbecued Seared Pork Tenderloin. Hands down. The layered flavors, the price, the whole nine yards; this dish is so good.

The Flower and Garden Festival runs though July 4th, and the Food & Wine Festival begins on July 14th.

What’s your favorite dish at the Flower and Garden Festival? Please let me know in the comments section below!

If you’d like to watch the Disney Dining episode of me trying these three new items, be sure to check it out below: