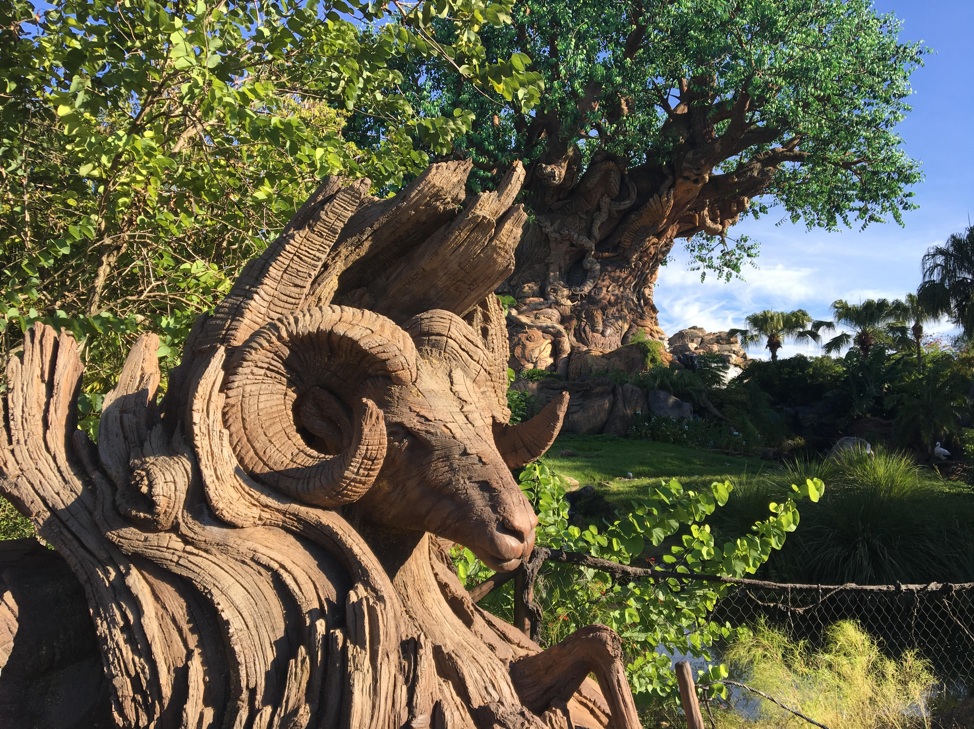 The Tree of Life, located in the Walt Disney World Resort, is the centerpiece and symbol of Animal Kingdom. This park opened in 1998, and the Tree of Life features 325 images of animals both extinct and existing. The inspiration for the shape is the now-troubled Baobab tree, and the array of animals on the tree work to convey respect for our natural world, and all of the creatures located within it. The Tree of Life is located as the central hub of Animal Kingdom, providing avenues to Dinoland, Africa, Asia, and Pandora – World of Avatar. The Tree of Life is comprised of hundreds of sculptures and images of animals including lions, horses, elephants, snails, and pelicans. All members of the animal world are given equal attention and footing, making the Tree of Life a beacon of the balance which propels the natural world forward. Snails and crabs are given the same care and attention as the mighty elephant. These carvings permeate every aspect of the Tree of Life, including the trunk, branches, and gnarled roots.

This tree serves as an introduction to the world of real animals awaiting guests, including okapis, vultures, and zebras. The animal population of Animal Kingdom has constant new additions, such as the recent addition of a two-month -old giraffe calf. As one enters Animal Kingdom, they have the privilege of seeing the tree before the park branches off accordingly. We so often run past it, on our way to a variety of attractions such as Kilimanjaro Safari or Kali River Rapids. With an unfortunate frequency, the Tree of Life becomes a five-minute stop with remarkable picture opportunities, without being appreciated in full detail. This is a 360-degree experience, complete with the Discovery Island Trail. This trail hosts a fabulous collection of animals which may be entirely overlooked.

Many familiar with Animal Kingdom will of course know the flamingos at the front of the tree, but there is an entire menagerie including storks, otters, red kangaroos, and the African crested porcupine. These trails are somewhat subtle and discreet, and therefore can only be observed appropriately if one takes their time. Many animals are very tricky to locate as they are designed to blend into their surroundings or may only be active at dawn or dusk.

The African crested porcupines — who have taken up residence around the back of the Tree of Life (toward Africa) — are sweet, playful animals, who appear to be most active in the earlier morning hours. It provides a warm-hearted start to the day to see these cuddly animals eating their bamboo with gusto and running around with a face glowing with unfettered glee and abandon. One somewhat mysterious animal is the red kangaroo, who may have even eluded the gaze of seasoned visitors. In a conversation with a Cast Member on a recent visit, I learned there are eight kangaroos who live in a habitat at the very front of tree (right behind the flamingos to the left of the front). These animals are often not visible, as they have a fully shaded area toward the back of their habitat which also includes dirt hollows that they dug for themselves. Therefore, they can be seen on a regular basis; however, one must look very closely toward the back of their habitat and have some luck on hand. These are but two of the living animals which live around the Tree of Life. While it can vary based on times of year, Animal Kingdom typically opens at about 9 a.m. and guests are welcomed into the park at about 8:30 a.m., if not sooner.  Running past real fast, the overwhelming majority continue to flock to Pandora, and specifically Avatar Flight of Passage. However, many also run right to the ropes available at the other lands of Animal Kingdom, without taking the time to notice the detail of the Tree of Life and the wildlife which may be most active during that time of day.

To be clear, I am just as guilty as any other guest of running right to the next rope in order to get on the premiere attractions as many times as possible. But one when does that, they are going to inevitably miss the detail which makes Walt Disney World the magical place it is. During a recent visit, looking up at the back, I gasped aloud at the stunning stallion which comprised one of the top branches of the backside of the tree. When one scampers on by, the many pieces which comprise this structure are utterly missed. To repeat — I am guilty of careening to the next rope in Asia to be able to walk on Expedition Everest several times before the crowds build; however, with the continued runaway success of Pandora, there is plenty of deferment of the crowds away from other lands so that one does not need to be exactly at the rope to enjoy other Animal Kingdom attractions with some ease. It’s Tough to be a Bug! is hosted inside of the Tree of Life, and many of these carvings and live animals can be seen as one enters or leaves the attraction.

I highly encourage anyone looking to enjoy the details and immersion which Walt Disney World offers to arrive at Animal Kingdom about one hour prior to opening, see the still-active animals, and take the time to be amazed by the seemingly endless optical illusions which are in fact breathtaking carvings. Imagineers and others tried endlessly to create the Tree of Life, and Cast Members continue to dedicate themselves to the care of the absolutely beautiful animals who call this area home. The Tree of Life reminds us of one of the purposes of Animal Kingdom — that the balance of the natural world relies on all of its creatures working in tandem — and provides stunning beauty which only helps to accelerate one into the amazing experience which is Walt Disney World’s Animal Kingdom.