What did a Disney Park Look Like the Day Before Thanksgiving? 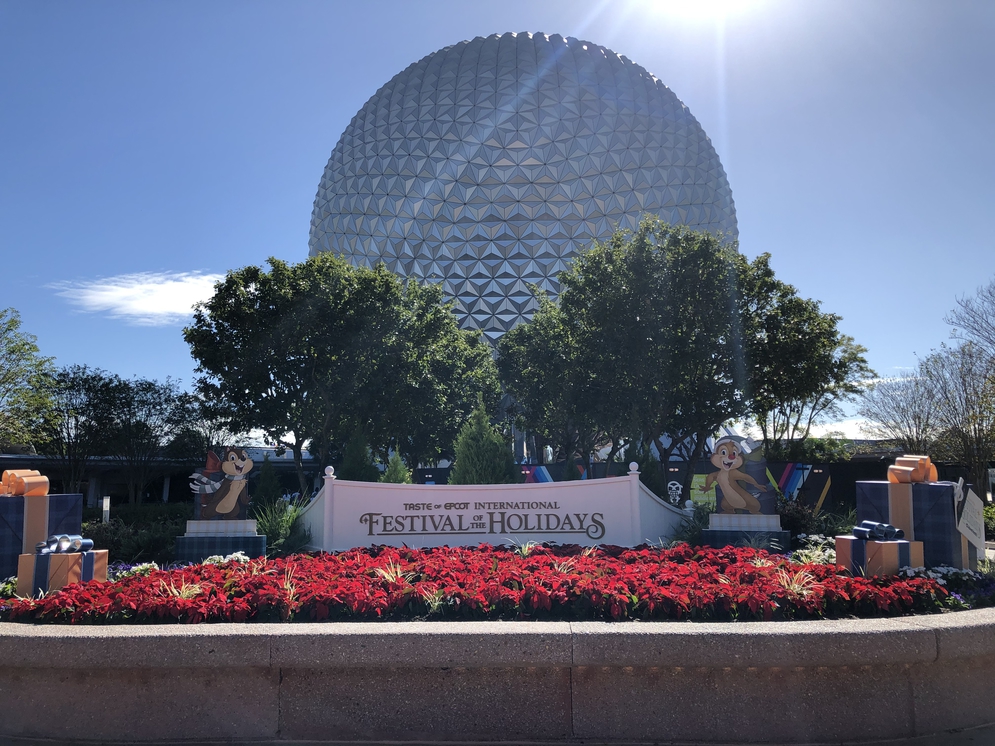 The week of Thanksgiving can typically be an extremely busy time in the Walt Disney World parks, but, as Jackie explained in her article earlier today, crowds are different these days. Due to the safety measures currently in place, what seems like a crowded, busy park is really only at 35% of park capacity.

So, what did EPCOT look like today, the day before a major holiday? Join me and we’ll take a virtual look around! It was definitely different than your typical day before Thanksgiving in a Disney park.

Taste of EPCOT International Festival of the Holidays begins this Friday. The main flower bed at the front of the park’s entrance area is already outfitted in all of its festival finery.

I entered the park at 1pm, and at that time, Spaceship Earth had a 30-minute wait. Waits can be higher earlier in the day, and with the park opening at 11am, 1pm is still technically early in the park day. Keep in mind that lines always look longer due to physical distancing.

As you can see here in Future World East, crowds at 1pm were light.

At World Showcase Plaza, the crowds were also surprisingly light. In fact, I would say that mid-day might be an optimal time to tour the park.

The Festival of the Holiday Outdoor Kitchens have received their new signage, and appear to be ready to go for Friday’s debut.

Teams have begun installing the barges in World Showcase Lagoon that will be used for EPCOT’s new nighttime spectacular, Harmonious.

While things were very quiet and crowds were easy to navigate, even in typically high-traffic areas like the U.K. pavilion, the park’s headliner attractions had wait times of between 60 and 85 minutes.

New stanchions are in place in the U.K. pavilion in what I believe is an effort to keep what would normally be a pinch point a bit more clear for cavalcades as they travel through the area.

Even as I rounded the World Showcase near the France pavilion, there was plenty of space to spare.

Something potentially exciting to note: the curtain around the stage in the Morocco pavilion has been removed. The curtain had been in place since the reopening of the park, and I’m hoping that this perhaps foreshadows the return of a bit of live entertainment.

As the afternoon progressed, crowds did get higher, and the normally long line for Frozen Ever After grew to the longest yet that I’d seen as it snaked its way through the China pavilion.

All in all, as you might expect with current safety measures and limitations in place, as well as the lower number of guests traveling to Walt Disney World these days, this was a very different experience than would typically be had the day before a holiday at a Disney park.

Thanks for coming along for our tour around the park!