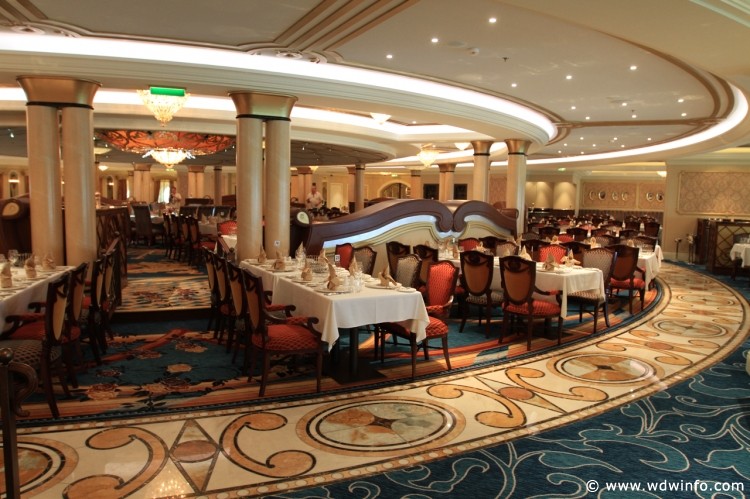 Argh Matey! One night on select Disney Cruise Line sailings there is a special Pirate Night! This celebration ends with the highly-anticipated Fireworks at Sea and the “Pirates in the Caribbean” Deck Party. Before all that, Disney encourages guests to “Eat Like a Scalawag” at their nightly rotational dining locations. During this family fun dining experience, guests are encouraged to wear their best pirate attire. For Pirate Night, there were disappointingly very few pirate-themed decorations in the restaurant. There were special pirate-themed menus, but a couple decorations scattered throughout the restaurant would have been a nice touch. We dined in the Royal Palace that night, so it basically looked like it does any other night. This wasn’t that big of a deal though, and honestly wasn’t something I even thought of until writing this review. Pirate Night seems to be the most laid-back night, which makes it feel like a more casual atmosphere, but the quality of the food wasn’t sacrificed just because it was a themed night. For my appetizer, I had the Davy Jones’ Locker Rock Crab Cake, which was served with chili-Cajun spiced coleslaw and lime. It was a good crab cake, but not exceptional. I certainly enjoyed it, but if I must be critical the crab was shredded into very small pieces, so there weren’t any nice chunks in there. Considering this had to be made for a mass amount of people, I thought it was good and I’d order it again. Next, I had the Carrot and Cilantro Soup. This was easily the worst thing I tasted on the entire cruise. This should not be on the menu. I like carrots and I like cilantro, but the combination of the two in this particular dish was just downright repulsive. There very well could be better carrot and cilantro soups out there, but there is a slim chance I’ll be willing to give them a try after tasting this. I chose King George’s Roasted Privateer Strip Loin for my main course, which is served with thyme-roasted potatoes, buttered Savoy cabbage, Yorkshire pudding and a rosemary wine sauce. It was delicious. The Strip Loin was a large cut of meat and was cooked perfectly. The piece I had was very tender, and while the Yorkshire pudding wasn’t the best I’d ever had, it still tasted very good. The meat was very juicy, and the rosemary wine sauce also gave the meat an additional boost of flavor. This was easily the best thing I’d had outside of the Premium Dining Experiences (Palo and Remy).

There were a few desserts that looked appealing, like the Rum-Soaked Chocolate Cake, but our entire table was fairly full at this point and wanted to ensure that we got a good viewing location for the fireworks, so we actually skipped out on dessert this night.

For Pirate Night, your server will also be dressed in pirate garb, which does add some fun to the dining experience. Our servers were nice, friendly, and accommodating. You can sense that the servers enjoy Pirate Night because while they still take their jobs seriously, the fun atmosphere does seem to take some weight off their shoulders. At least that was what I interpreted.

We had been at either Remy or Palo the previous two nights, and our server from the first night got sick. So considering we were new faces, they did a great job with any questions, concerns, or allergies we might have. This isn’t the level of service you get when dining at the premium locations, but I never expected that from them. I thought — considering this was part of the rotational dining structure — that they did a great job.

Pirate Night is a lot of fun. This is what Disney Cruises are all about. While not every dish was perfect (I’m looking at you Carrot and Cilantro Soup) it was largely a good meal, and the entertaining feel of Pirate Night gave the experience a little boost of excitement. There are a couple of small adjustments I think Disney can improve on, like the addition of a few pirate decorations in the restaurant, but other than that I think this was one of my favorite nights at the rotational dining locations.