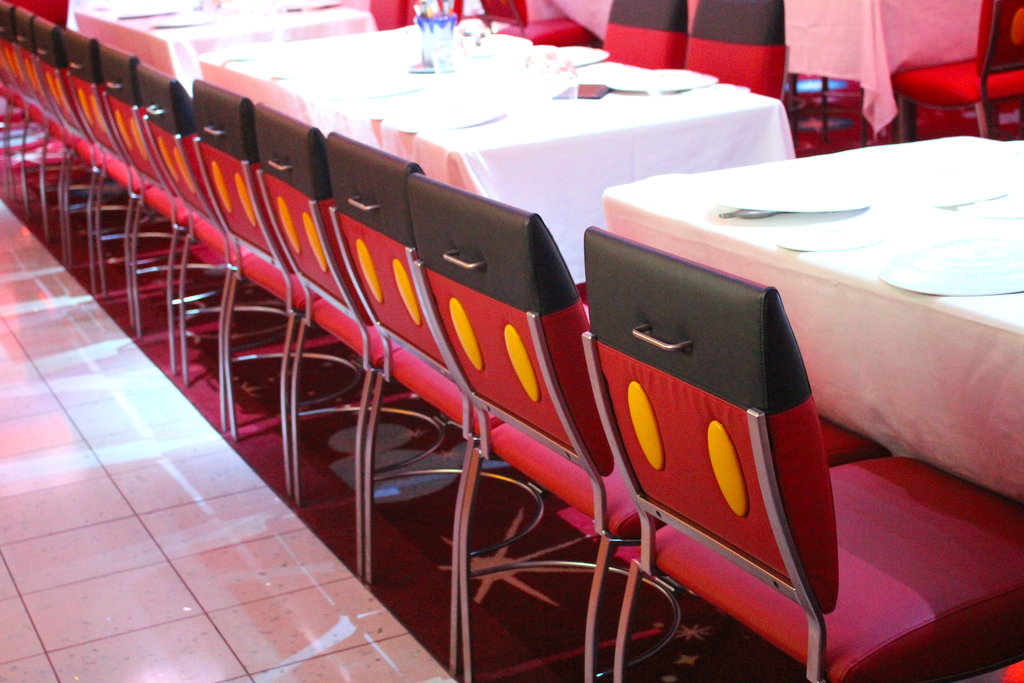 As a first-time cruiser this past spring break, I was a little nervous about the dining aspect. For one, I did not want to be assigned a table with another family; I was worried I’d spend my evenings engaged in small talk with strangers rather than relaxing with my family. Second, I didn’t want to be underdressed on “formal night”, but I also didn’t want to bring a gown. And, third, I was really worried the food would be subpar.

Happily, none of these scenarios happened during our week-long adventure on the Disney Fantasy.

The Fantasy’s three sit-down dining rooms that are all-inclusive (meaning you can bring your kiddos) include: Royal Court, Animator’s Palate and Enchanted Garden. I spent eight meals during the week in one of these locations, and I’m glad I did. (Don’t despair, my spouse and I indulged in an amazing meal at Palo, too. But that’s another story.)

There are numerous quick-service locations on board, and we tried them all. But honestly, I found the most popular spot, Cabanas (the buffet), overwhelming. My fellow shipmates — although lovely most of the journey — really became aggressive at feeding time. My 7-year-old was practically trampled when he accidentally paused in front of the peel-n-eat shrimp station.

As the week progressed, I started to look forward to our nightly dining routine. We had a table for four, which eased my mind. It’s not that I don’t enjoy meeting people, but I didn’t want every meal to be a shared experience. The kids and my husband had lots of adventures to talk about, and I wanted to hear about their day — not someone else’s.

Dressing for dinner was a non-issue. I’m not really sure why they designate evenings as casual, semi-formal or formal each night. Few followed any sort of dress code. On the formal night, I saw several men in a jacket and tie, but they were in the minority. I’m guessing I was seeing less dressy attire because I was part of the first dinner seating (5:45 p.m.), which is full of young kids. Guests taking part in the late seating (8:15 p.m.), definitely seemed to stay more loyal to dress themes.

Which restaurant my family dined in happened on a rotation. On arrival day, the schedule of where to check in each night was on the Disney Cruise App. Our family had the same team of servers, no matter the location. On the pirate and Star Wars-themed nights, the menus were the same in all three locations. On other nights, Royal Court served French cuisine, Animator’s Palate served Italian and Enchanted Garden’s menu was New Orleans inspired. All had many seafood choices as well.

Overall, the food was really good — not ‘Ohana, Sanaa, or California Grill really good, but on par with most Disney casual resort dining locations like Kona Café, The Wave, Olivia’s Café, or Whispering Canyon Café. Starters we really enjoyed were the ahi tuna and avocado tower (Enchanted Garden), serrano ham (Animator’s Palate) and lobster and shrimp cocktail (Royal Court). The bread service everywhere was great, and we never passed up on any chowder or tomato soup on the menu.

Some favorite entrees were the Bolognese (Animator’s Palate), salmon (all locations), green pea and fava bean risotto (Animator’s Palate), short ribs (everywhere on Pirate Night), and the sea bass (Enchanted Garden). Our sons mainly stuck with the boring old kids’ menu offerings like pizza, pasta with marinara and chicken fingers, but when they wanted a change of pace they enjoyed the lighter side salmon from the grownup menu.

For dessert, we kind of tried it all. Everyone ordered a unique dessert and everyone shared. (Funny how kids become adventurous eaters during the dessert course.) The best dessert by far was the southern-style pecan tart (Enchanted Garden). The kids also got a lot of Mickey Bars with sprinkles.  The only meals I regretted ordering were the flatbread (Animator’s Palate) and the rack of lamb (Royal Court).

Atmosphere-wise, my favorite place to dine of the three was Royal Court. We were lucky to have this location on our first night because it really set the mood. As you can guess, the room is decked out castle-style: grand lighting, golds and creams, and mosaics on the walls similar to those in Magic Kingdom’s castle.

Small details here and there reminded us that Imagineers had a hand in designing our space. For example, our bread was served in a basket shaped like Cinderella’s carriage. Both sides of the restaurant had large porthole views of the ocean.

My number two choice was Animator’s Palate. This restaurant was decorated as if Disney animators had left for the day. It reminded me of the old studio walking tour at Hollywood Studios (now the location is Star Wars Launch Bay).

There were nooks all around filled with artist tools, books and models ready to be plucked off the shelf for the next illustration. Large video screens surrounded the room. One night, we had an encounter with Crush, similar to Turtle Talk at Epcot. On our second visit, we each got to sketch our own character, then our servers delivered our drawings to someone behind the scenes who turned the handiwork into a Disney short complete with a Fantasia score.

My family was assigned Animator’s Palate on Star Wars night as well, and we were a little disappointed that there were no movie clips or previews playing during our meal. That night it was extremely loud inside the room. The combination of hundreds of kids and no windows made it difficult to communicate. We realized then that the onscreen entertainment was vital to being able to talk to the person next to you.

My third choice of dining rooms was Enchanted Garden, just slightly edged out by Animator’s Palate because I only got the chance to eat there once.

The décor was lovely: pale greens; flowers, vine and lattice wall murals; a fountain; and beautiful lights.  We didn’t get assigned one of the comfy rounded booths, but we made sure to snag one during open seating at breakfast later in the week.

One clever detail about Enchanted Garden is that the lighting in the restaurant goes from day to night as the meal progresses. The lotus lights on the ceiling glow and open as the main lighting dims. Also interesting to see is the small gallery in the foyer. If you arrive a few minutes before your seating time, you’re treated to some Disney art similar to pieces you might see at the Epcot International Art Festival.

Royal Court was usually open for open-seating breakfast and lunch, and sometimes Enchanted Garden was available for an open-seating breakfast. The ship’s Personal Navigator newsletter keeps track of all of that if you need it. Although still a buffet, the dining room breakfasts were much more relaxing and less crowded. Some guests even loaded their plates and went back to their room, probably to enjoy a leisurely breakfast on their own veranda.

In the end, I found dining at sea to be a breeze. The food is endless, the choices please both the picky and the adventurous, the restaurants are beautiful to look at and well-themed, and the service is top-notch. For my next sailing, I’ll definitely leave my worries on shore.