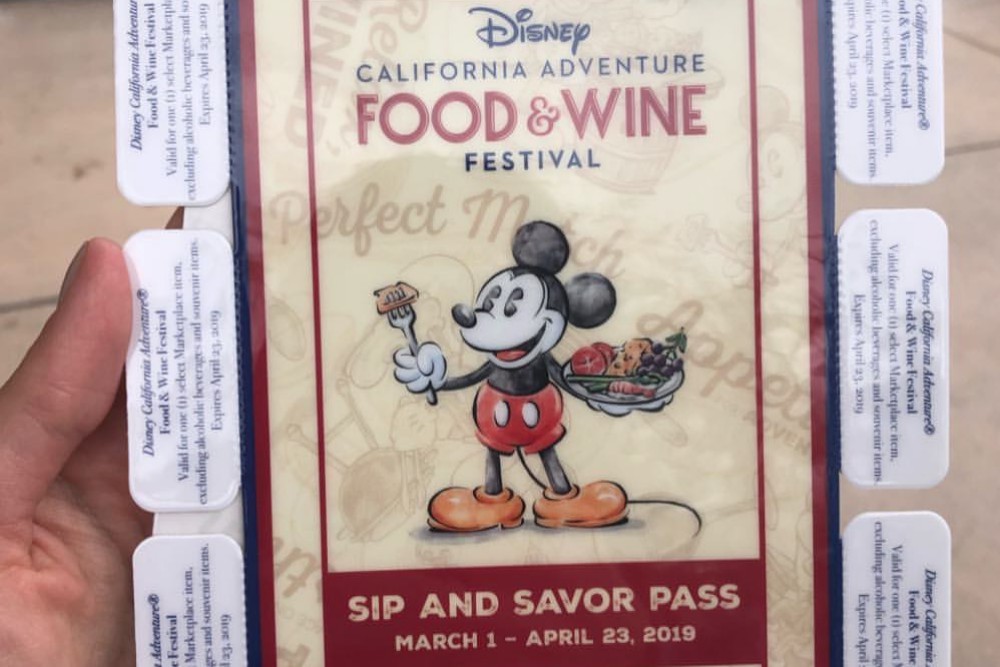 Disney was kinda enough to gift The DIS with a Sip and Savor Pass, and while we don’t review food we haven’t paid for, we can at least give you a look at some of the new food items and show you how much food that Sip and Savor Pass gets you. 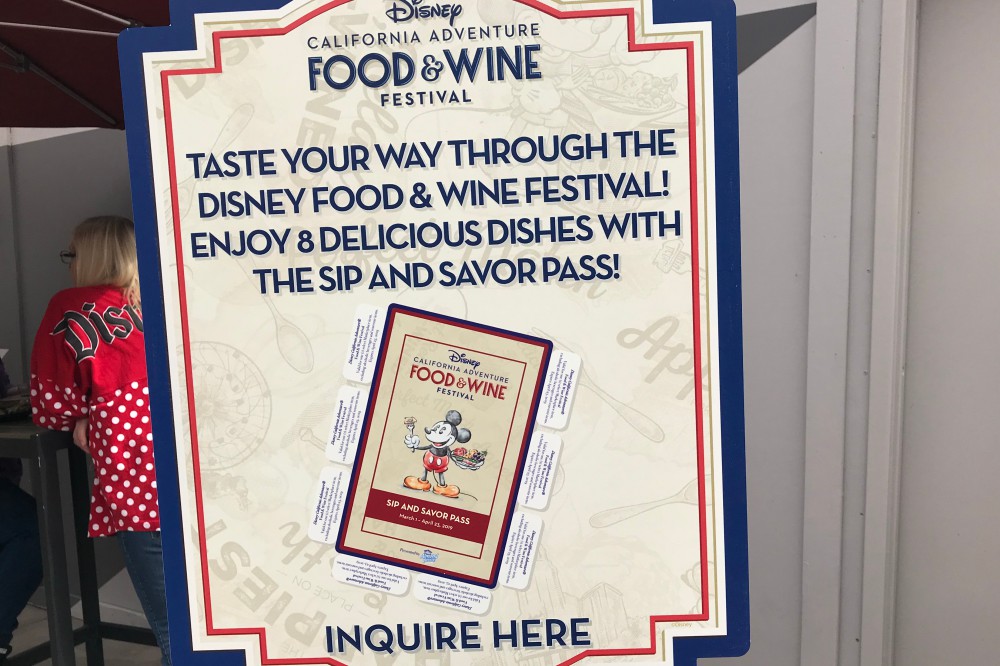 Sip and Savor Passes are available for purchase at several locations around Disney California Adventure. The cost is $54 ($49 for Annual Passholders), which gets you 8 food items at any of the Festival Marketplaces, Paradise Garden Grill, and even some of the outdoor vending carts. 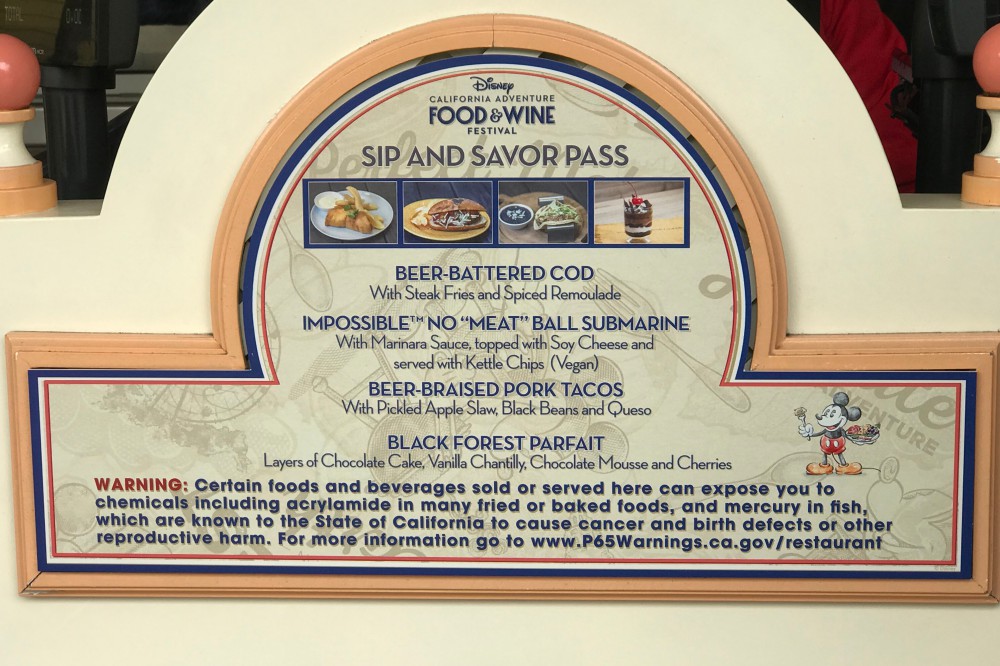 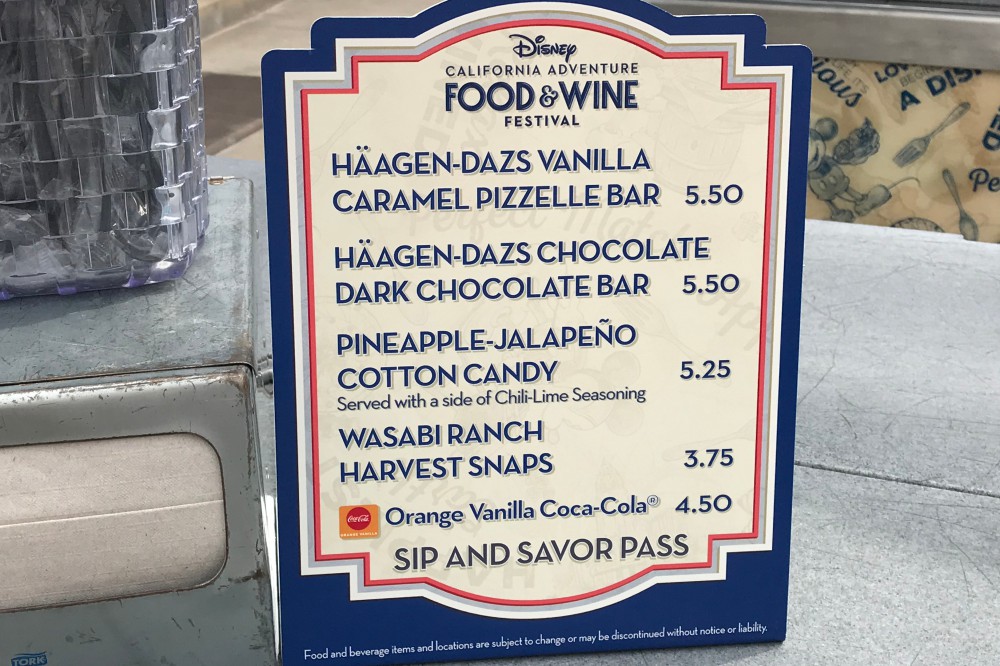 Tyler, Katrina, and I grabbed our Sip and Savor Pass and heading off on our California Adventure (pun intended) at the Festival. We used the Pass, but I will still give you the retail price [$] for reference. Use those Sip and Savor Pass tabs wisely! 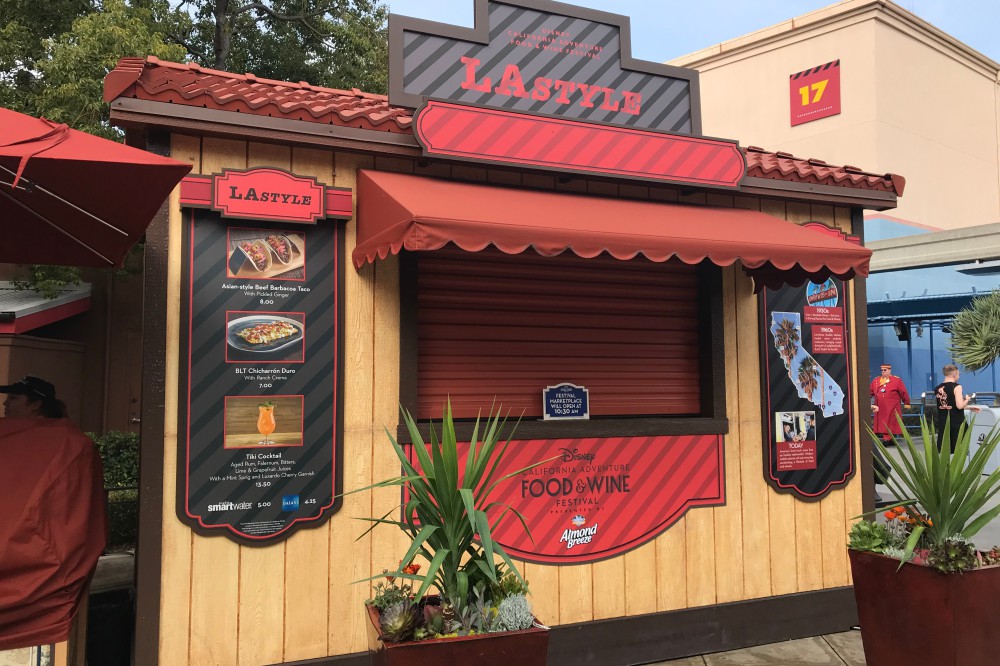 Our first stop was the LAstyle marketplace, which typically has a menu reflecting the food truck culture in Los Angeles. In years past, the food at this booth has been lackluster, so it was nice to see some new items on the menu. 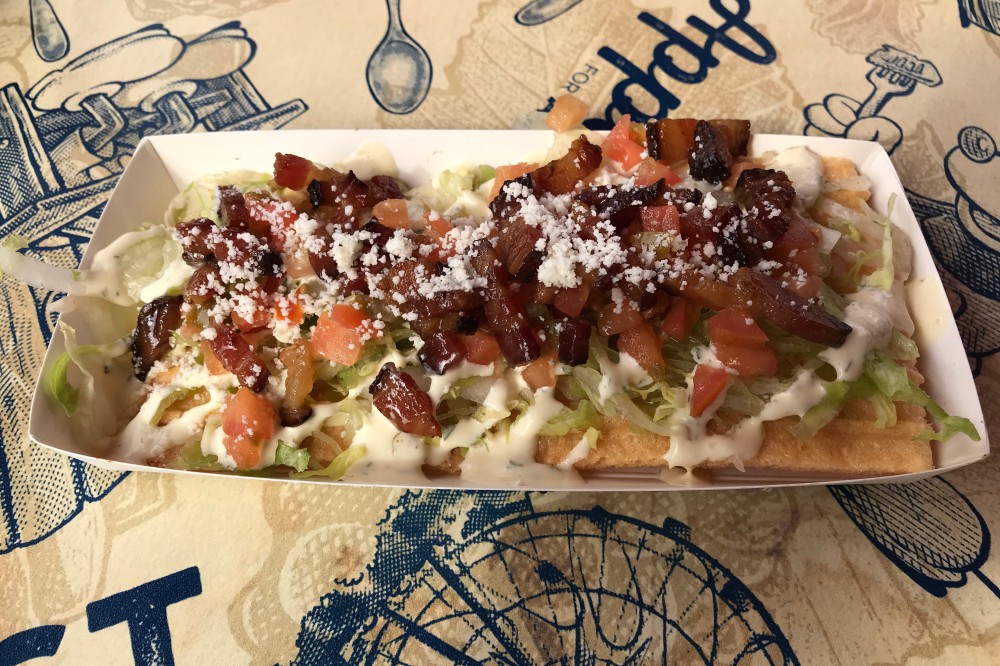 The first dish we tried was the BLT Chicharron Duro with Ranch Crema [$7.00]. For those of you that don’t know, a chicharron is a pork rind, so this dish is basically a BLT on top of a pork rind…a HUGE pork rind. How do they come up with this stuff?!? 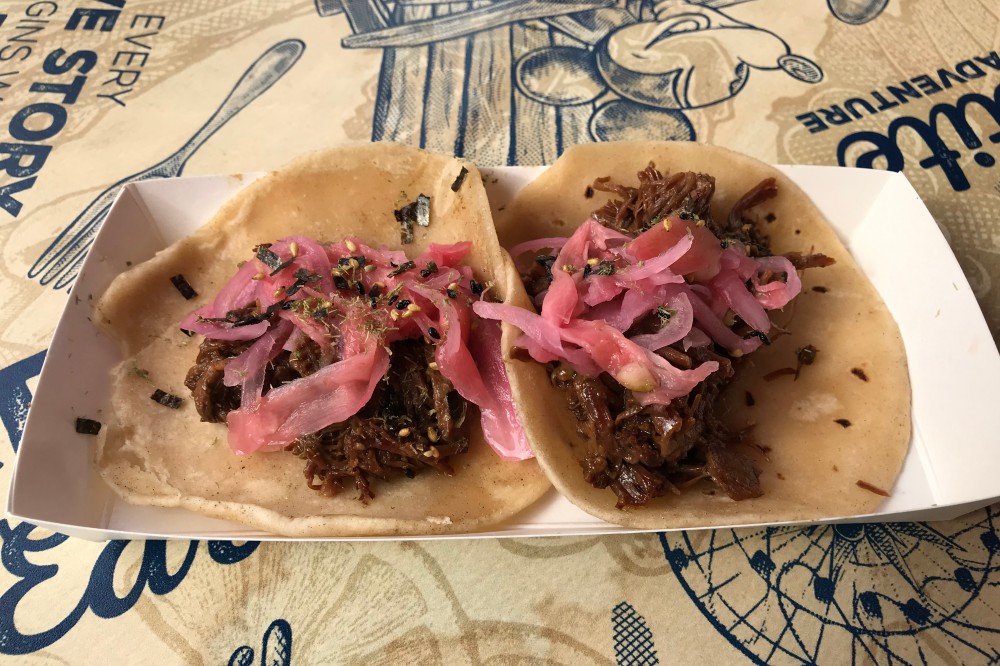 Next we had the Asian-style Beef Barbacoa Taco with Pickled Ginger [$8.00]. The tough Korean barbecue style beef of the past, has been replaced by tender shredded beef.

As a bonus, we purchased the Tiki Cocktail [$13.50], which is made with aged rum, falernum, bitters, lime juice, and grapefruit juice. This is a nice nod to the tiki bars that are popular in Southern California. 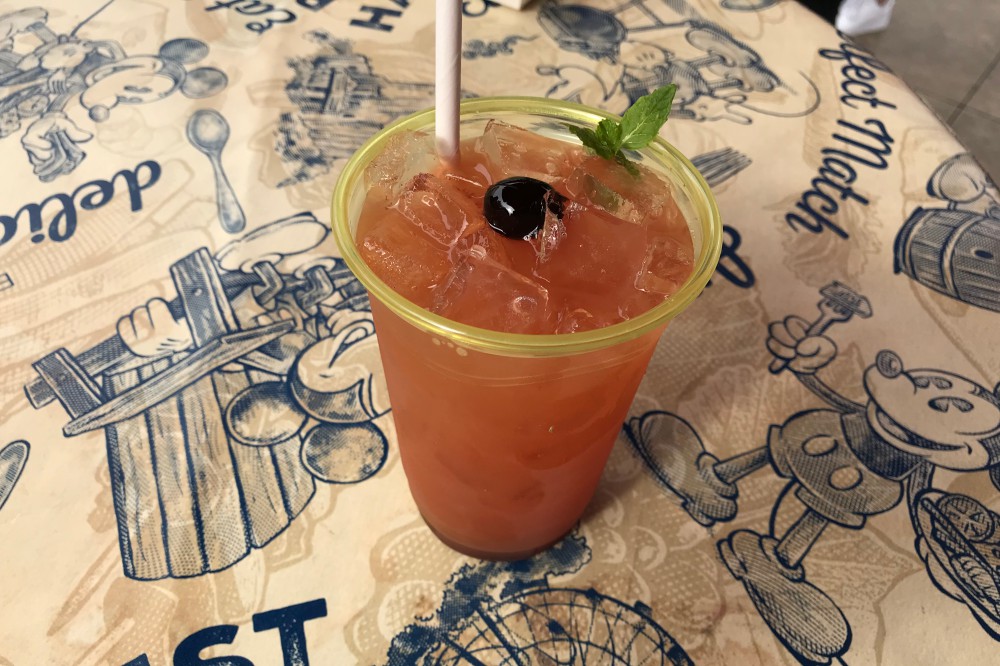 Next, we headed into the heart of the Festival. Since Katrina has a gluten allergy, we stopped at Citrus Grove for one of a handful of gluten-friendly items on the menus. 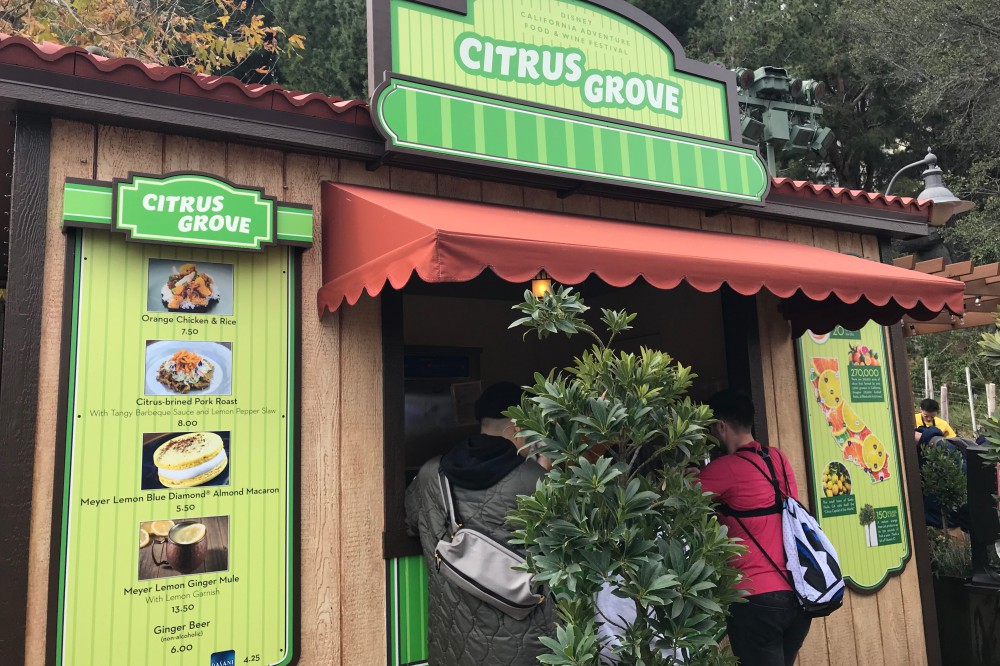 The Disneyland food festivals always feature a over-sized macaron or two, and this year is no exception.

The Meyer Lemon Blue Diamond Almond Macaron [$5.50] is crispy on the outside, with a light lemon cream (and a hidden fruit filling). The menu didn’t specify the fruit, but we’re thinking it may have been cranberry. In the past, it’s been blueberry, but it seemed different this year. 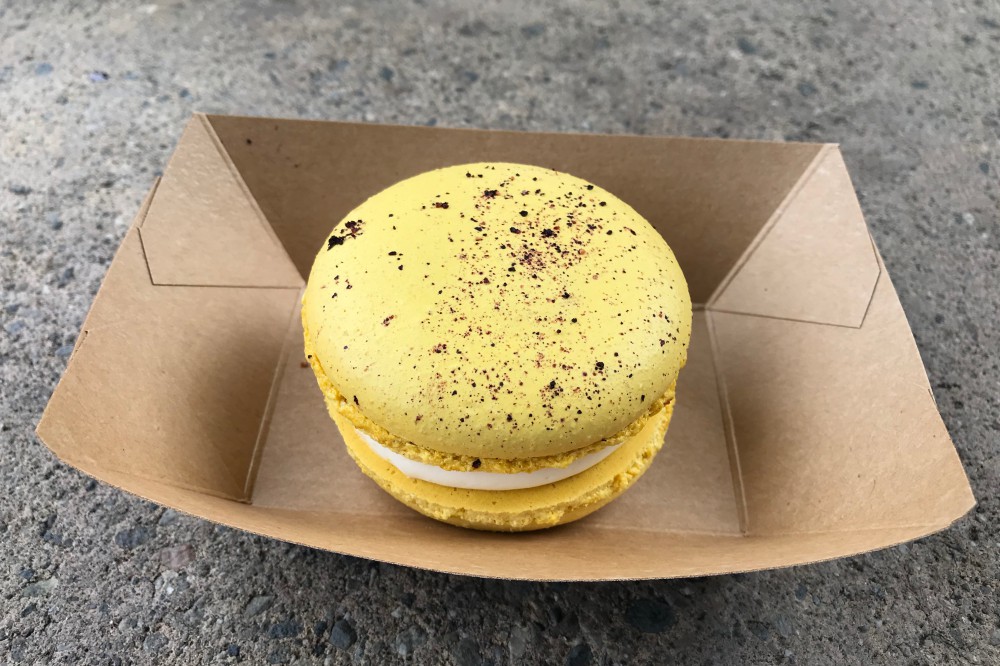 The California Craft Brews marketplace has a fun new kid-friendly item for this year’s Festival, so we had to give it a try. 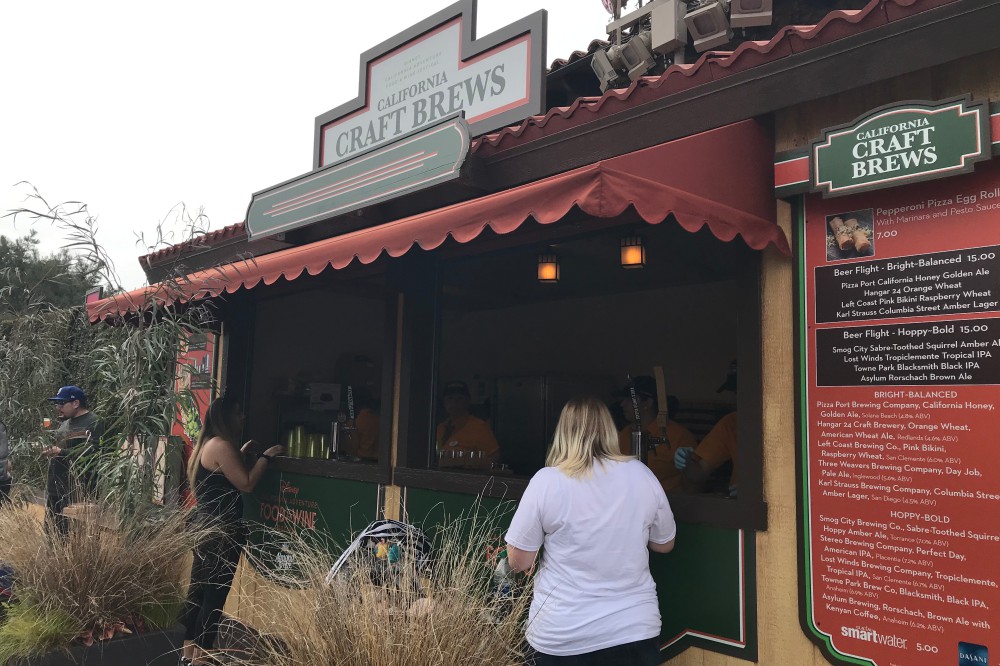 Kids should love the Pepperoni Pizza Egg Rolls with Marinara and Pesto Sauce [$7.00]. They’re crispy on the outside and filled with pizza goodness on the inside. 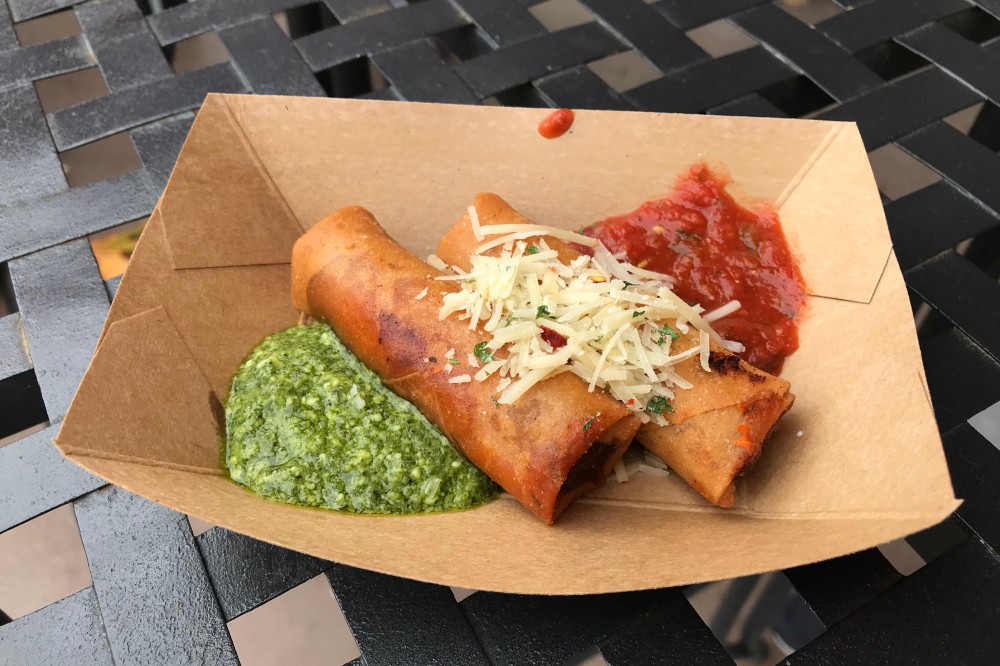 Our next stop was Avocado Time, where we wanted to try the new not-a-burger burger.

This booth has had a guacamole burger in the past, but this year is serving up the Petite Impossible Burger with Guac and Pepper Jack Cheese [$8.00]. 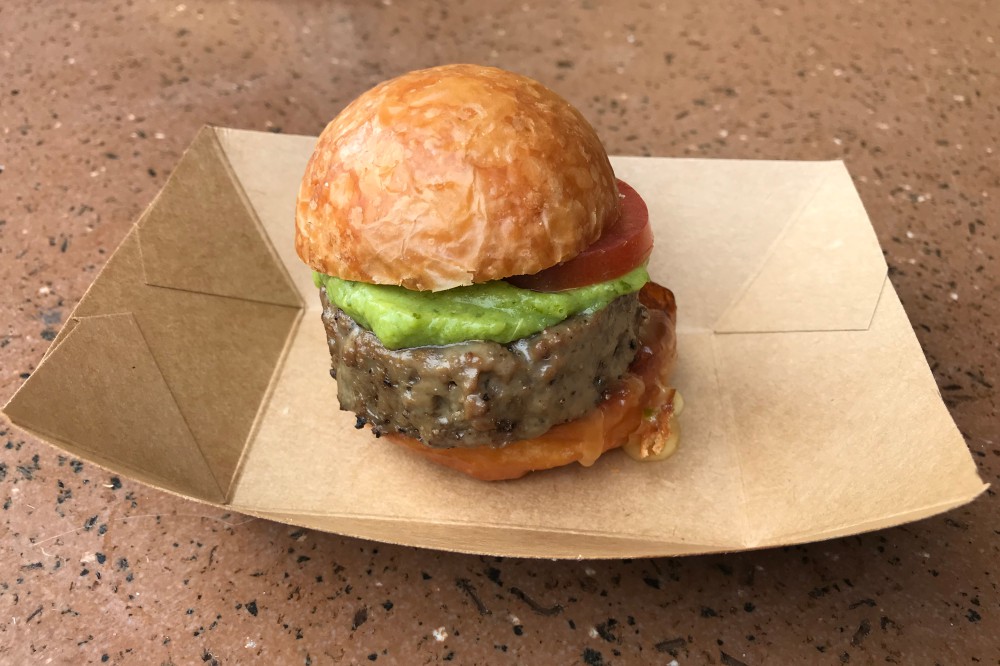 The burger was seasoned well, and aside from the unnatural shape of the patty, it might be easy to fool someone into thinking this was real beef…not that I would ever do that.

We also tried the Spiced Roasted Chicken on a Pita with Avocado Hummus and Garlic Sauce [$7.50]. While the garlic sauce reminded us of Mediterranean sauces we’ve had, this one was much lighter. 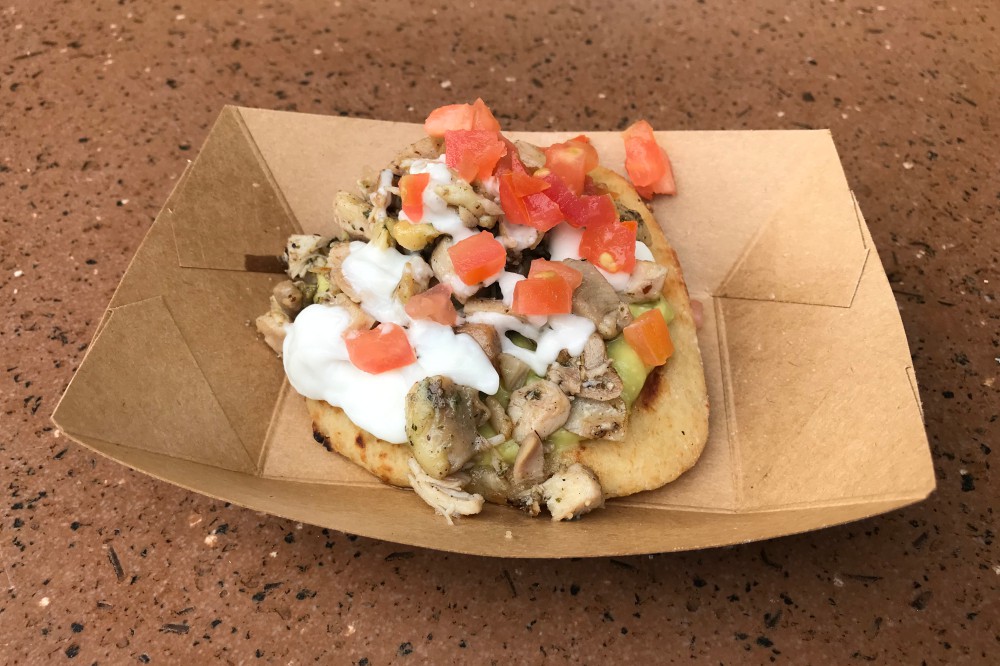 Hidden near the Grizzly River Run water wheel is a new booth called Golden Dreams, which we’re hoping is a nod to the attraction of the same name that used to sit nearby. 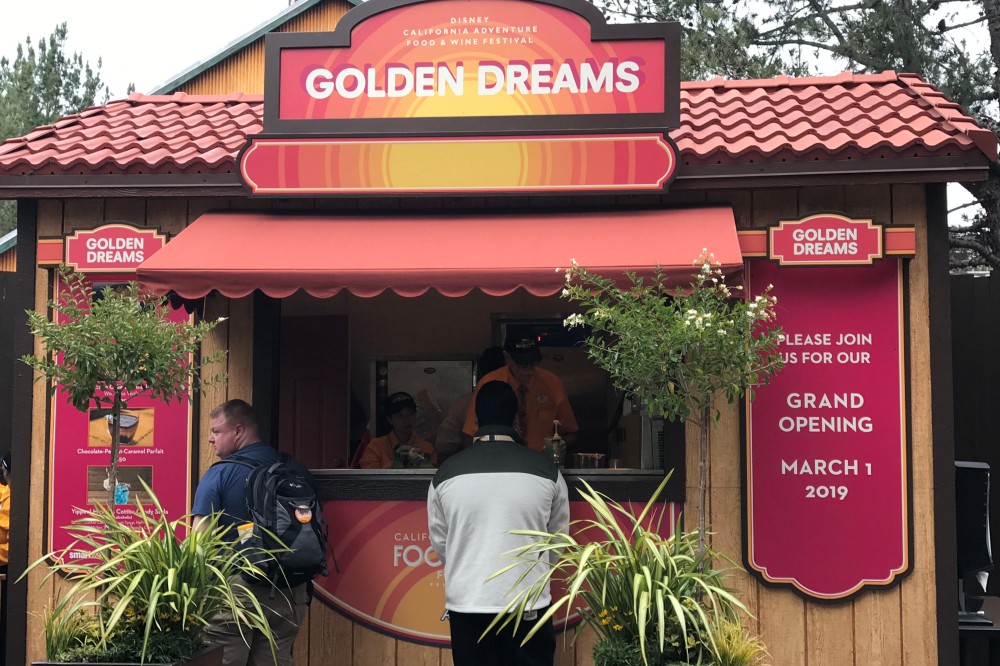 Tyler HAD to have the Anaheim Chile Rellano Bites with Salsa Verde [$6.75], Disney’s take on the classic Mexican dish. The bites were crispy and filled with the perfect amount of cheese. 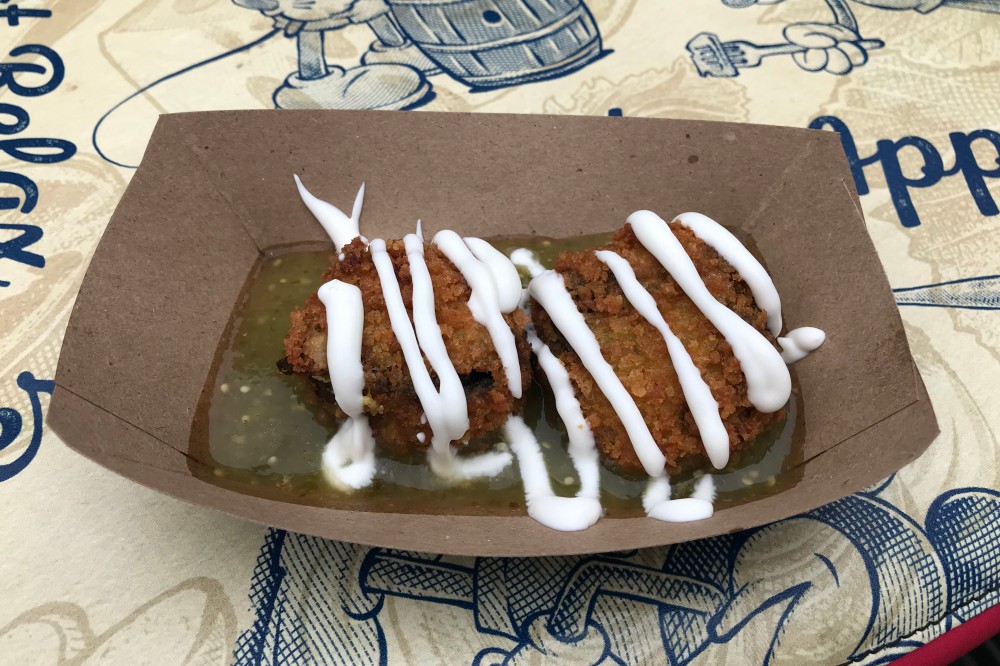 Our last stop was at the Off The Cob Marketplace, where Katrina found another gluten-friendly item. 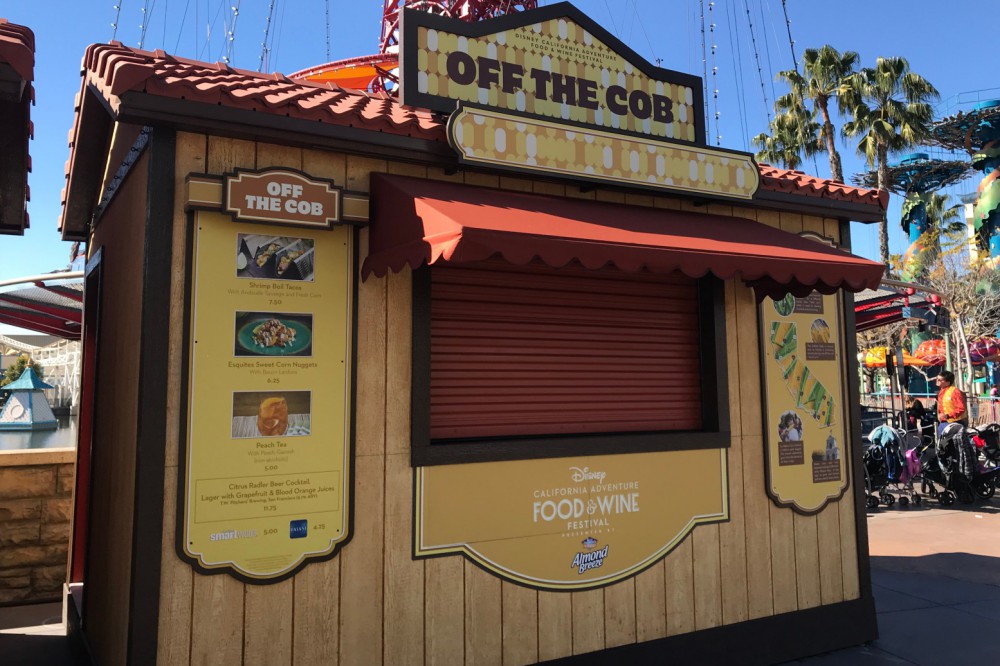 The Shrimp Boil Tacos with Andouille Sausage & Fresh Corn [$7.50] are a returning item, but done much better this year. The corn tortillas were filled with large chunks of tasty shrimp and spicy sausage. 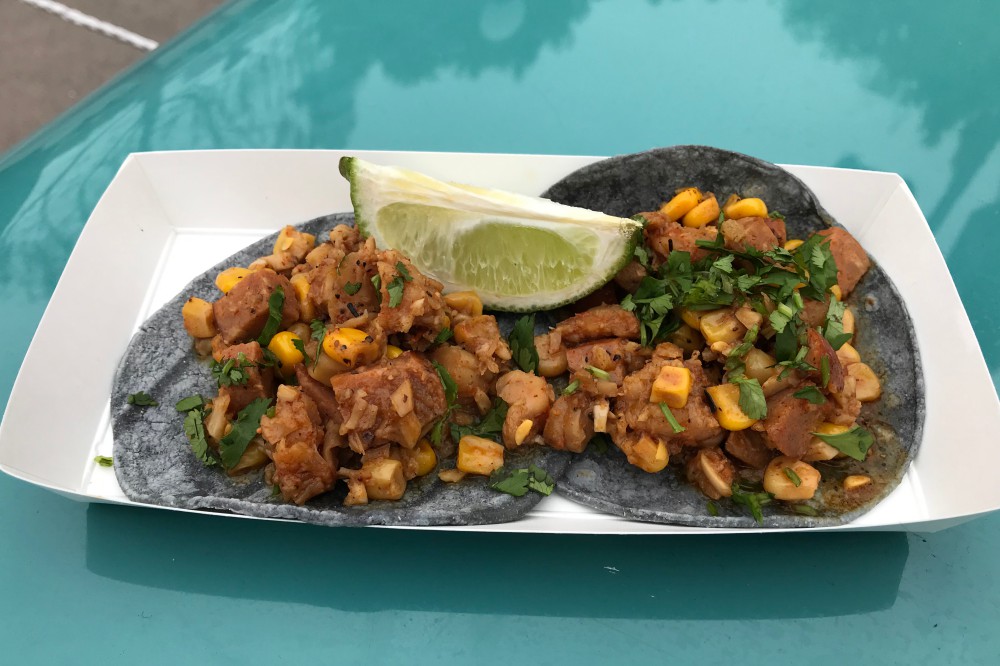 We had a great time spending the afternoon eating our way through this year’s Festival and found the lines easy to manage. To make the lines even easier, California Adventure brought back something they tested at the recent Lunar New Year Celebration.

You can go to any cashier (find the shortest line) and purchase items from ANY of the Marketplaces. You’ll get a receipt for each item, so when you’re ready for that item, skip the cashier and head straight to the window to pick up your food!

The Disney California Adventure Food & Wine Festival continues through April 23rd, so there is plenty of time to grab a Sip and Savor Pass of your own!