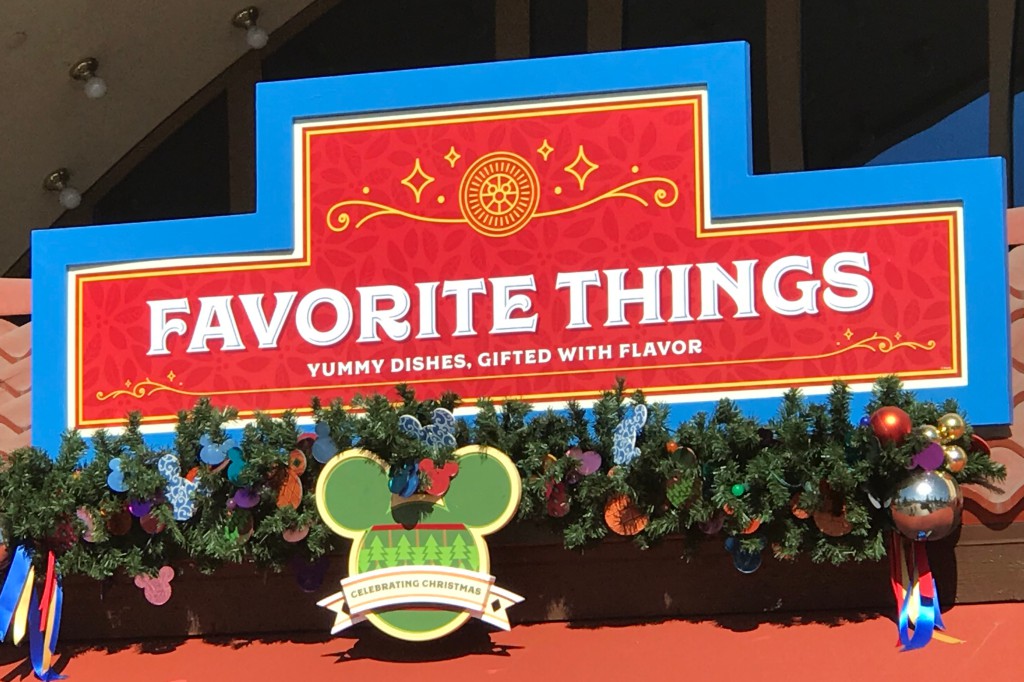 Festival of Holidays has begun at Disney California Adventure and Morgan, my fellow DIS Unplugged podcaster, and I spent a better part of two days sampling the food at the Festival Foods Marketplaces so that we could let you know what’s new and what’s good.

We both picked up the Sip & Savor Pass, which offers 8 tastings for one price: $56 (or $51 for Annual Passholders). The lanyard can be purchased at various stores and at the booths themselves.

TIP: Make sure to do the math and pay cash for lower priced items to maximize the value of the Sip & Savor.

True to our word, at our first stop we found something new and something good. Favorite Things is located in front of The Little Mermaid-Ariel’s Undersea Adventure and features one new item and one returning favorite.

Unfortunately, the new item was underwhelming. I had big hopes for the Glazed Ham Shanks with Honey Crumble [$8.00], but my excitement was misplaced. The serving included two pieces of ham, with a glaze that had very little flavor. The ham itself was fine, but it needed more excitement in the glaze to make it worth the price tag. 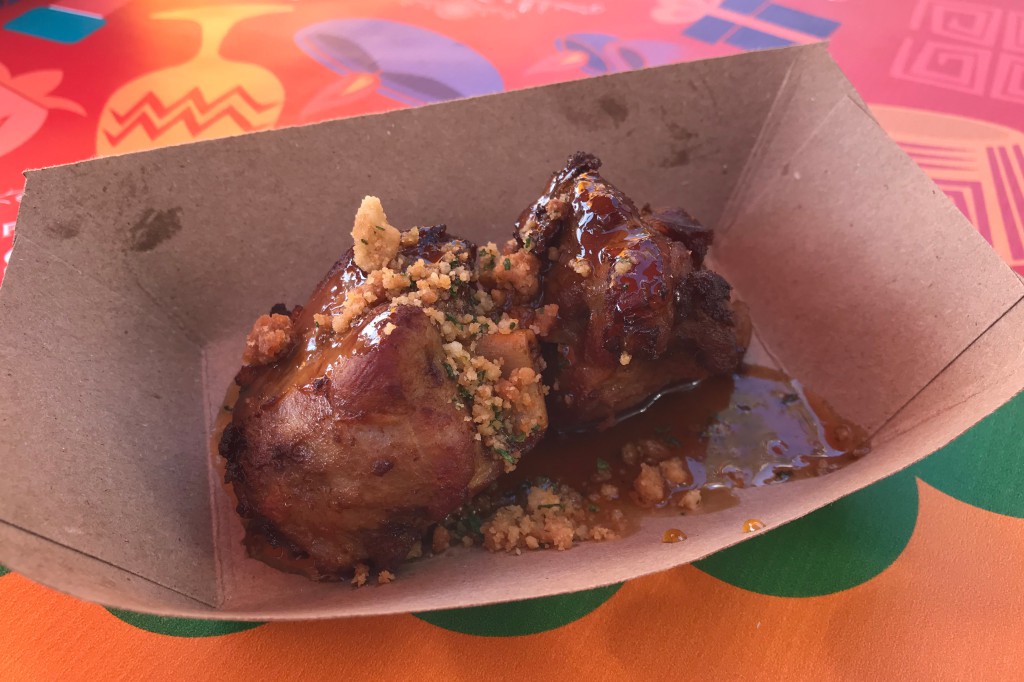 Festivals at Disney always feature some sort of mac & cheese, and this year’s returning Holiday Stuffing Mac & Cheese [$7.75] is one of the better iterations. While the breadcrumb topping didn’t have a lot of “stuffing” flavor, the crunch it provided combined with the creamy pasta for a classic feel-good dish. This was one of our favorites. 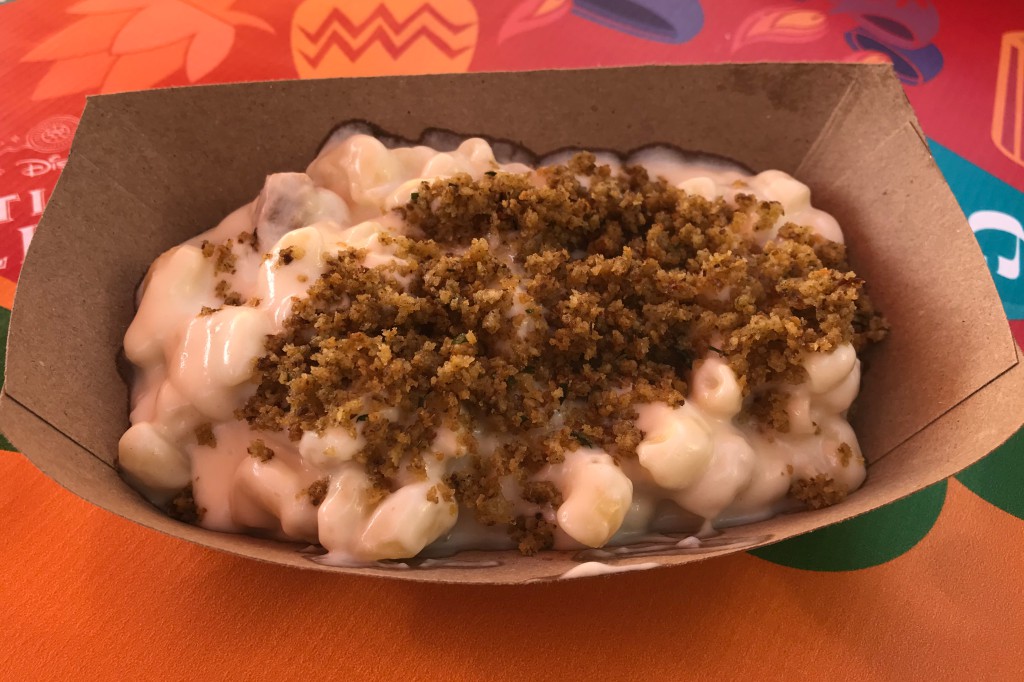 The prepackaged Gingerbread Mickey Cookie [$5.25] was dry and not worth the calories. For the same price, grab a churro or another tasty dessert around the resort. We were disappointed. 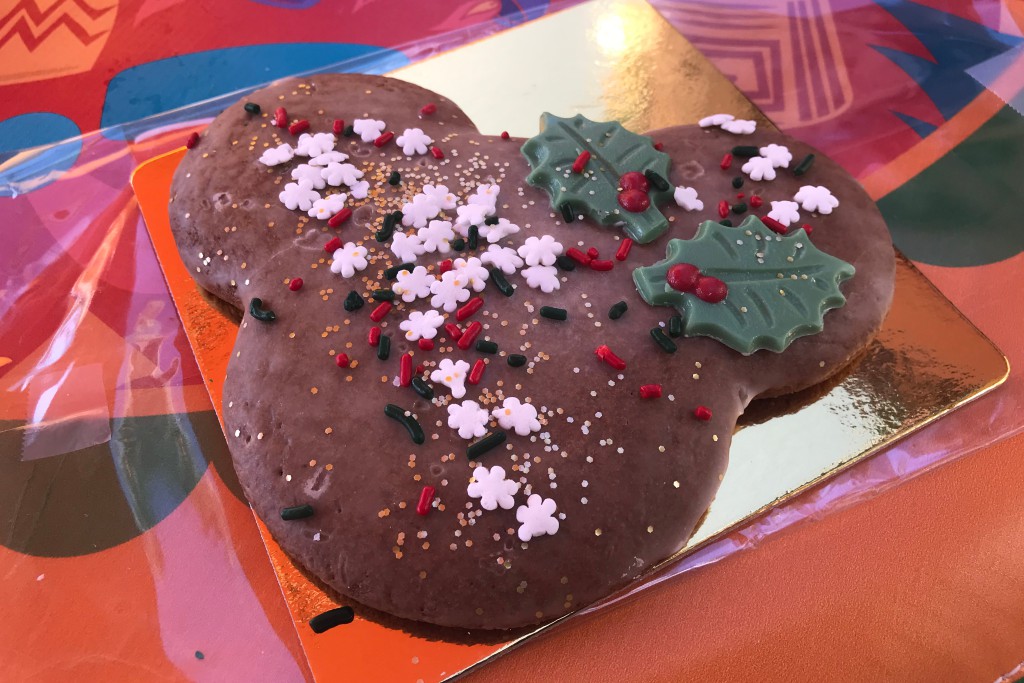 Disney has been promoting their plant-based options quite a bit recently, so we figured our next stop should be at Grandma’s Recipes, which is located across from Sonoma Terrace in the Pacific Wharf area.

We started with the Shepherd’s Upside-down Pie made with Plant Based Ground Beef [$7.75].  While we found the item not quite as visually appealing as the promotional photo (it never is), we were pleasantly surprised with the flavors. The “beef” and creamy mashed potatoes were enhanced by the freshness of the carrot and pea topping. We were also pleased with the portion size on this hearty dish. The Mickey biscuit on top, however, was dry and flavorless, adding nothing to the dish. It didn’t need it. 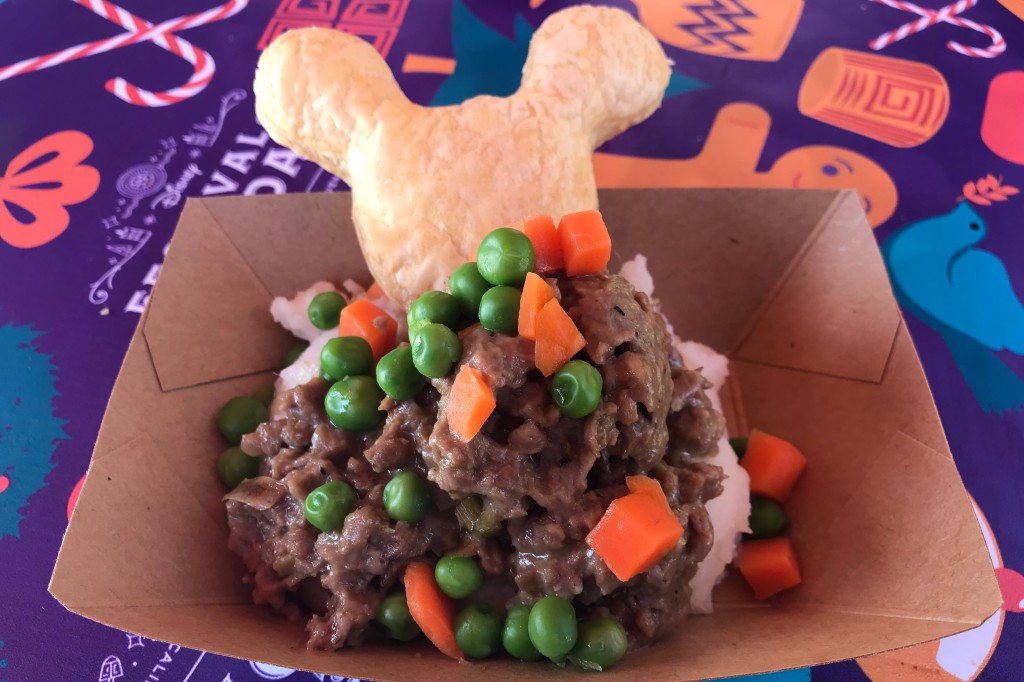 The other dish was Curried Cauliflower & Chicken with Lemon Tahini Sauce and Black Garlic Drizzle [$7.00]. Neither of us are all that familiar with Indian flavors, but we liked the chicken and cauliflower individually. The two items together with the sauces, just somehow didn’t work for us. 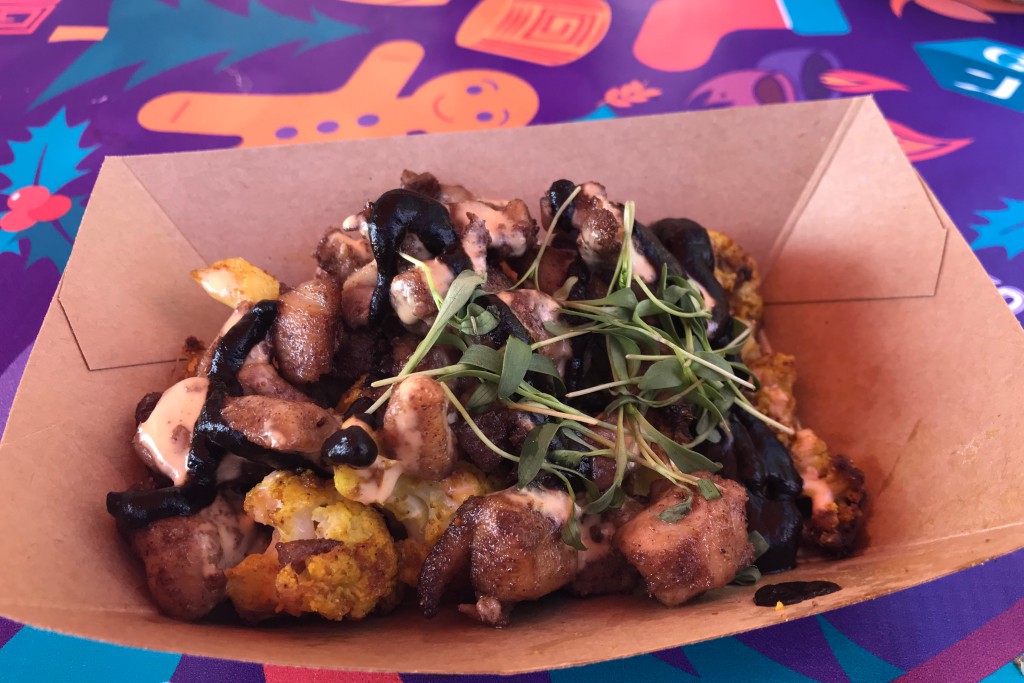 We washed it down with the Navidad Punch [$6.00] made with Simply Limeade, apple juice, and pomegranate premium syrup, which Morgan really enjoyed. A cute Mickey Jingle Bell Glow Cube is available for an additional $5.00. 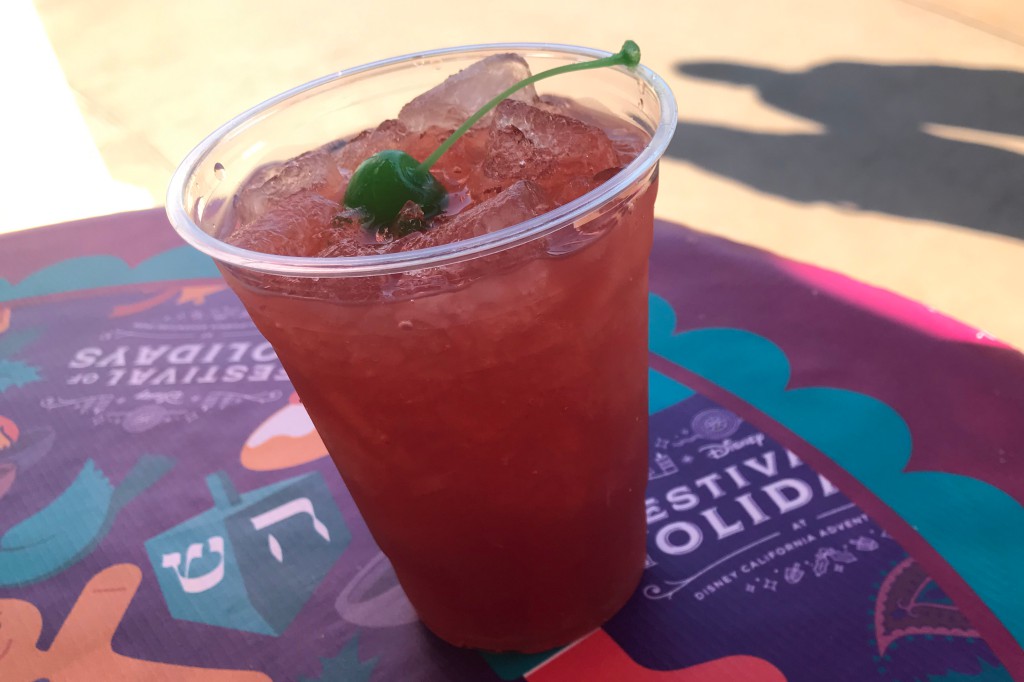 Our final stop of Day One was at A Twist on Tradition, located across from Sonoma Terrace in the Pacific Wharf area, which features one of my favorite returning items.

First though, we tried the Reimagined Beef Wellington [$8.50], which was one of the priciest items at the Festival. We ran into a problem here as neither of us enjoy mushrooms, but were willing to give it a try. Unfortunately for me, the first bite I got was nothing but mushrooms. Morgan fared better and kind of enjoyed this dish. The pastry was flaky and the sauce added to the dish. The serving (and amount of beef) were small, however, compared to the amount of pastry. 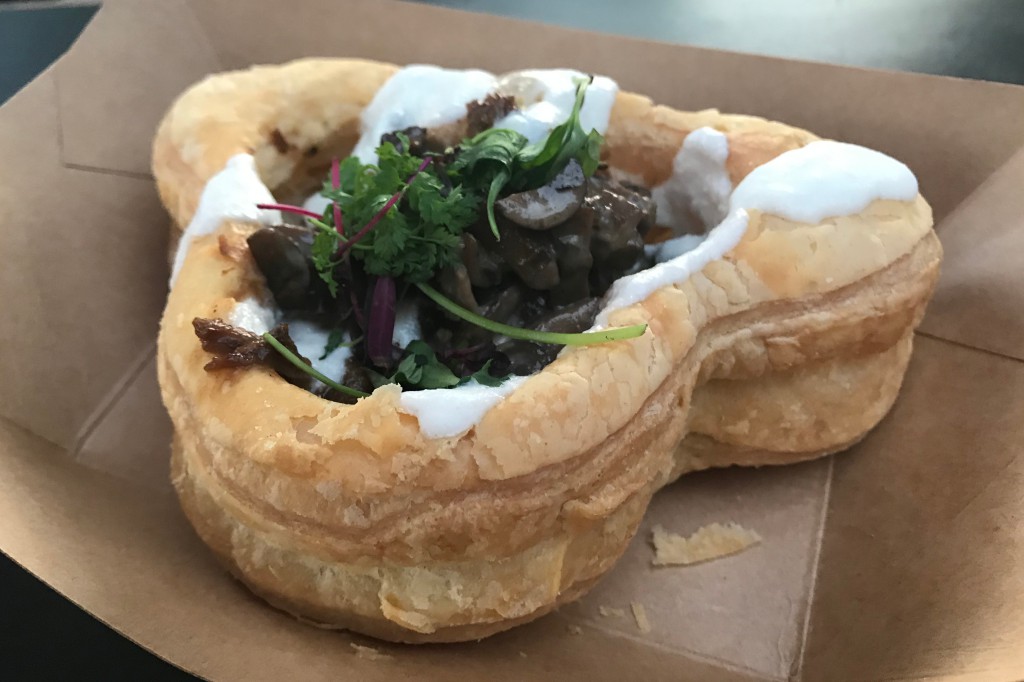 The other dish is awesome, because it’s…well….TOTS! The Reuben Potato Tots with Russian Dressing and Rye Toast [$7.00] have been around in one form or another for years. This year’s dish featured classic tots, which you can’t go wrong with, topped with the corned beef and classic sauce. While I’m sure it’s not for everyone, we had no complaints with this dish and it was one of only a handful of items that we finished. 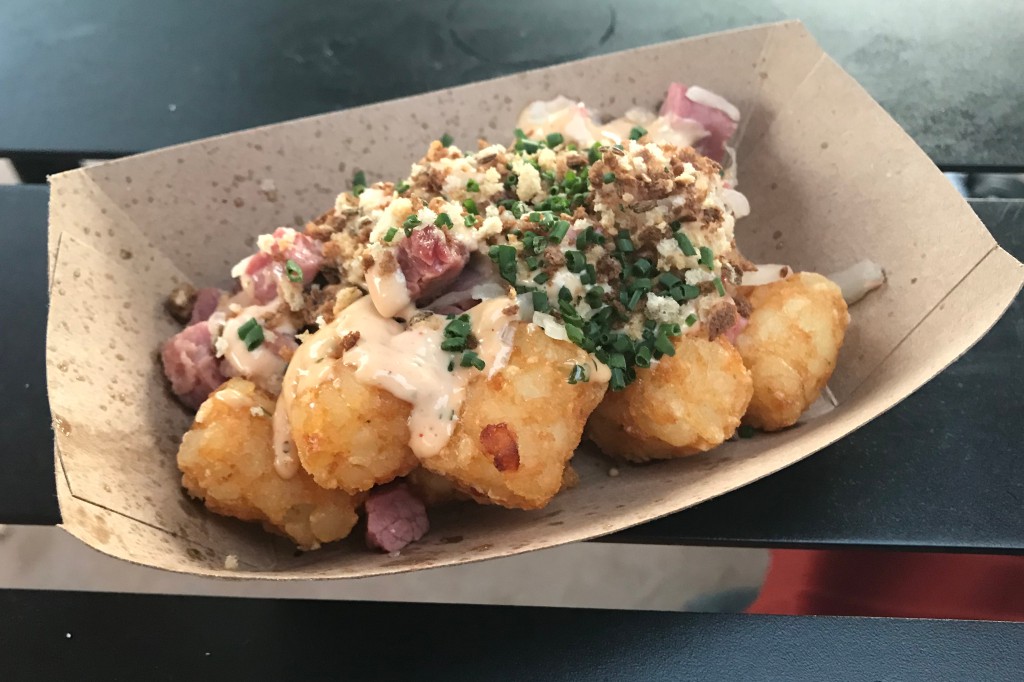 Day Two started with a visit to Merry Mashups, which is located near the Golden Zephyr in Paradise Gardens Park. This Marketplace shows that when you combine Christmas and Navidad or Navidad and Diwali, it’s not always a good thing.

First we tried the Turkey & Stuffing Tamale with Cranberry Relish [$7.75], which we were a little apprehensive about. The result was surprisingly good. Aside from the need for a bit of salt…a common theme among many of the dishes…the flavors were nice and the tamale was moist. The tamale was removed from the corn husk before the toppings were added, to make for easy eating. 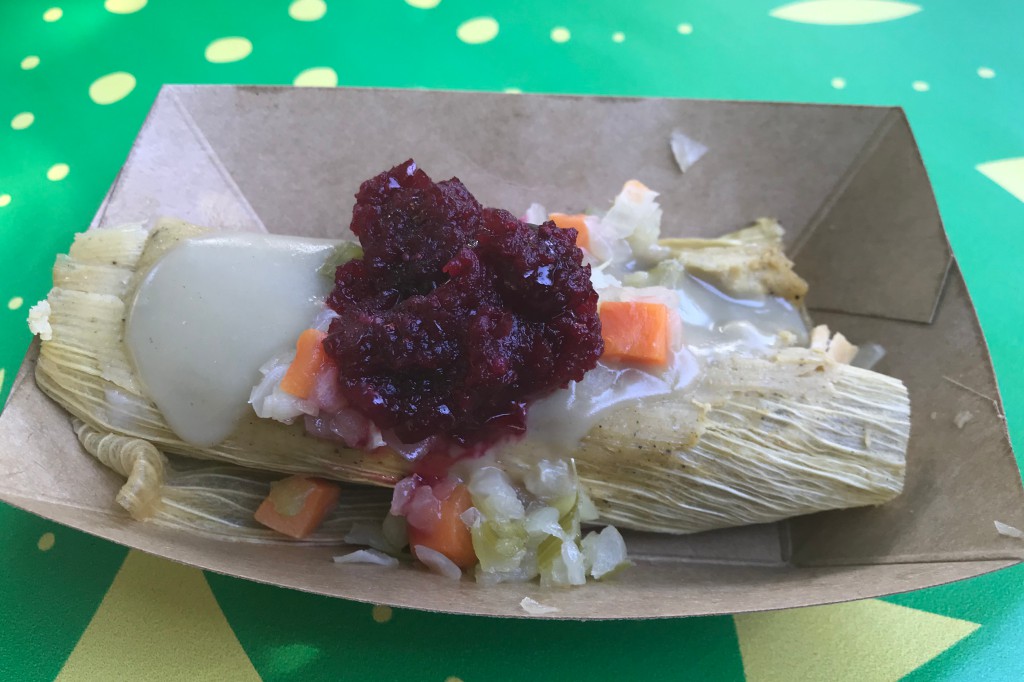 The Pork al Pastor Naan Taco with Pineapple Pico de Gallo and Cilantro-Lime Yogurt Crema [$8.00] didn’t fare as well. While the pork itself had a good flavor and the salsa added a nice kick, the dish didn’t go together well. The naan was tough, which made the dish hard to enjoy, and the cold salsa immediately dropped the temperature of the entire item. Asking for the pico de gallo on the side may make for a more successful dish. 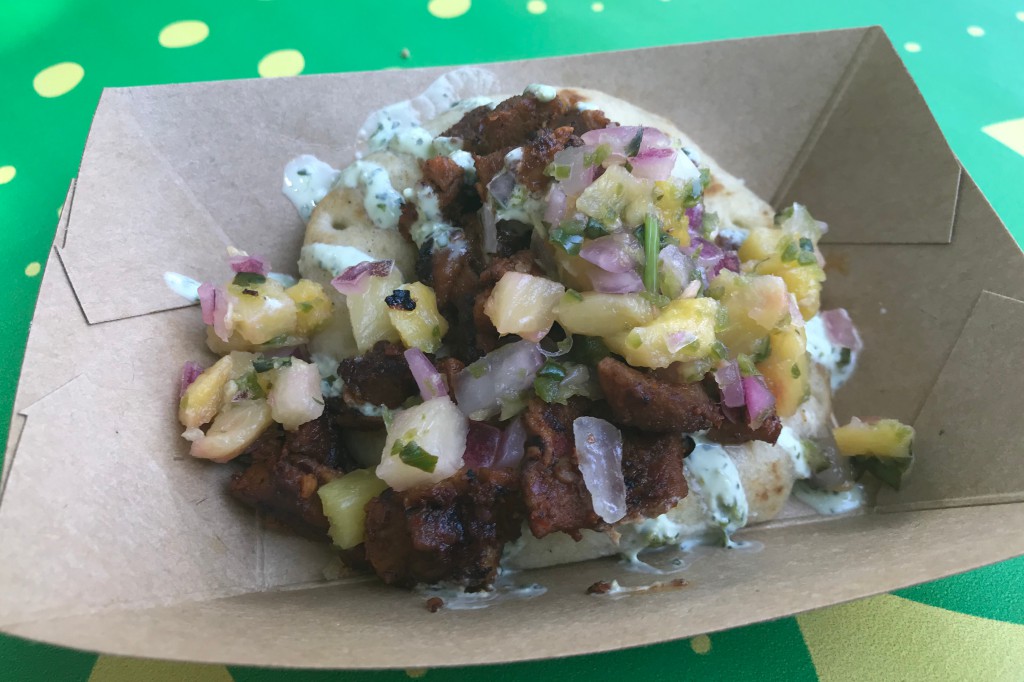 The Churro Yule Log [$6.00] was a small, but tasty dessert. Morgan didn’t enjoy the texture, but I thought it was fine. Still, a regular churro is a much better option. 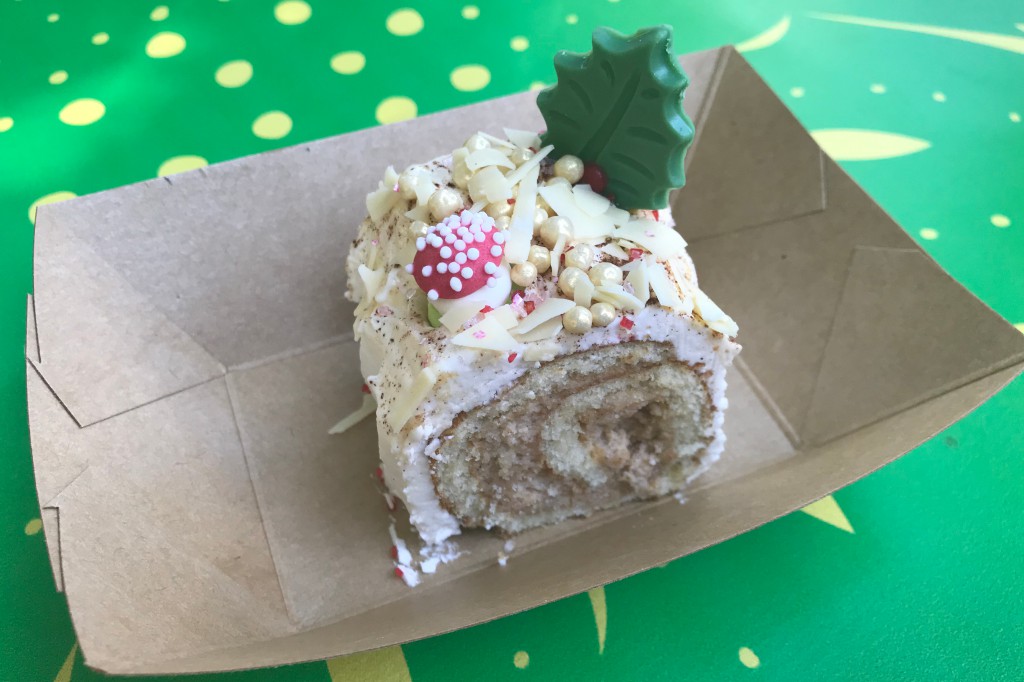 Finally, a two-fer. We headed to Winter Sliderland, with a stop off at Brews & Bites. Both are located in the Pacific Wharf area near the Blue Sky Cellar.

TIP: You can pay for items from any of the 8 Marketplaces with any cashier. The line at Winter Sliderland was long, so we ordered at Making Spirits Bright, then went straight to the windows at the other two locations to pick up the food.

Morgan was really excited about the Beef Pot Roast on Potato Roll with Horseradish Cream [$8.50], so we tried that first. For me, the beef was good, though under-seasoned, but the roll was tough. Morgan disagreed and loved the entire dish. 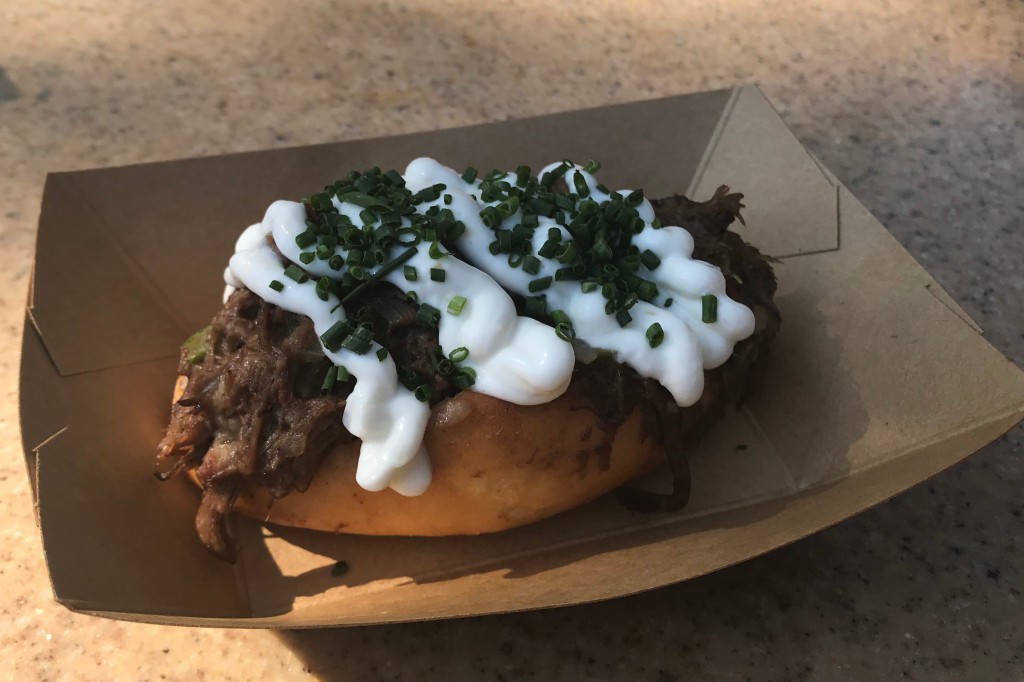 The other sandwich was the Fried Turkey Slider on Herb Roll with Cranberry Slaw [$7.50]. Festival of Holidays typically has a more standard Thanksgiving style sandwich, so it’s nice that they chefs wanted to try something new. The results, however, were awful. The turkey was dry, tough and mostly flavorless; the slaw added nothing except a pool of liquid at the bottom of the tray making the bread soggy; and the tough herb roll had no business being made into a sandwich. Please skip this. 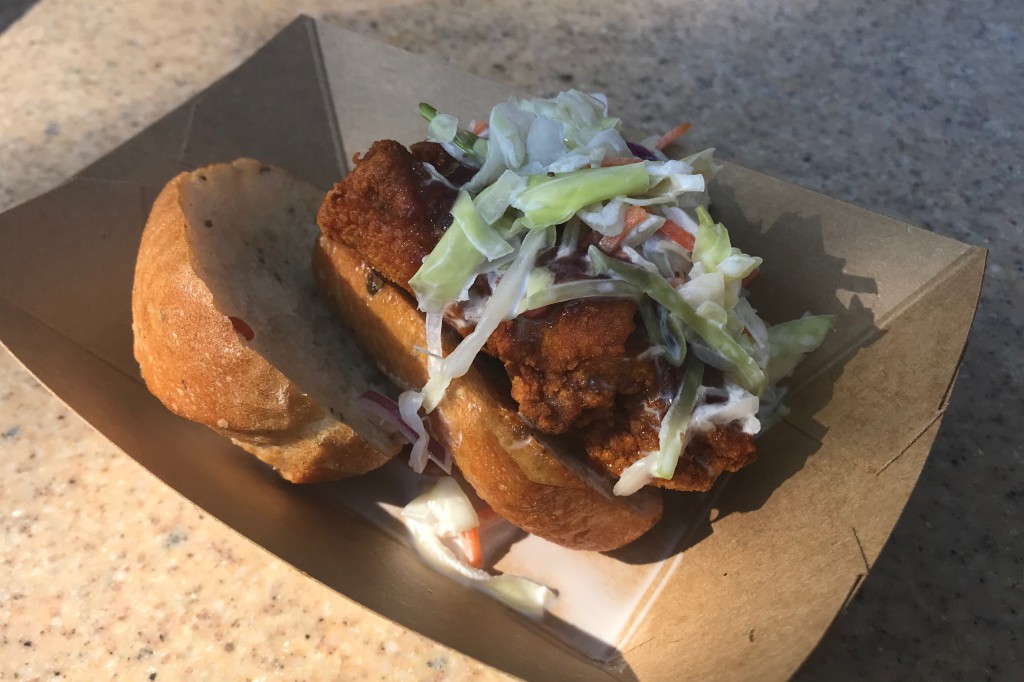 To round things out (and save the day), we grabbed a returning favorite from Brews & Bites, the Chorizo Queso Fundido with House-made Tortilla Chips [$6.50]. The cheesy dip is one of Morgan’s favorites, and while the serving could have been a bit larger for the price (and the cup), it was still a tasty snack to end our time at Festival of Holidays. 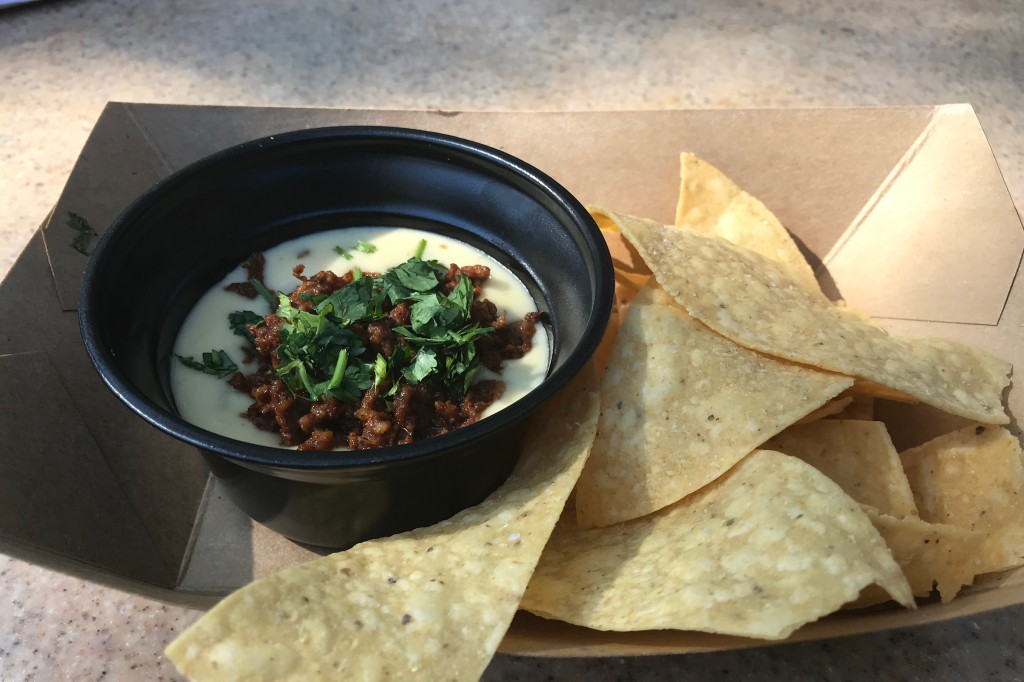 We weren’t able to get to Making Spirits Bright, which features two desserts, or Holiday Duets, with its pork belly adobo, so another trip to Festival of Holidays will need to happen soon.

Festival of Holidays continues through January 6, 2020.