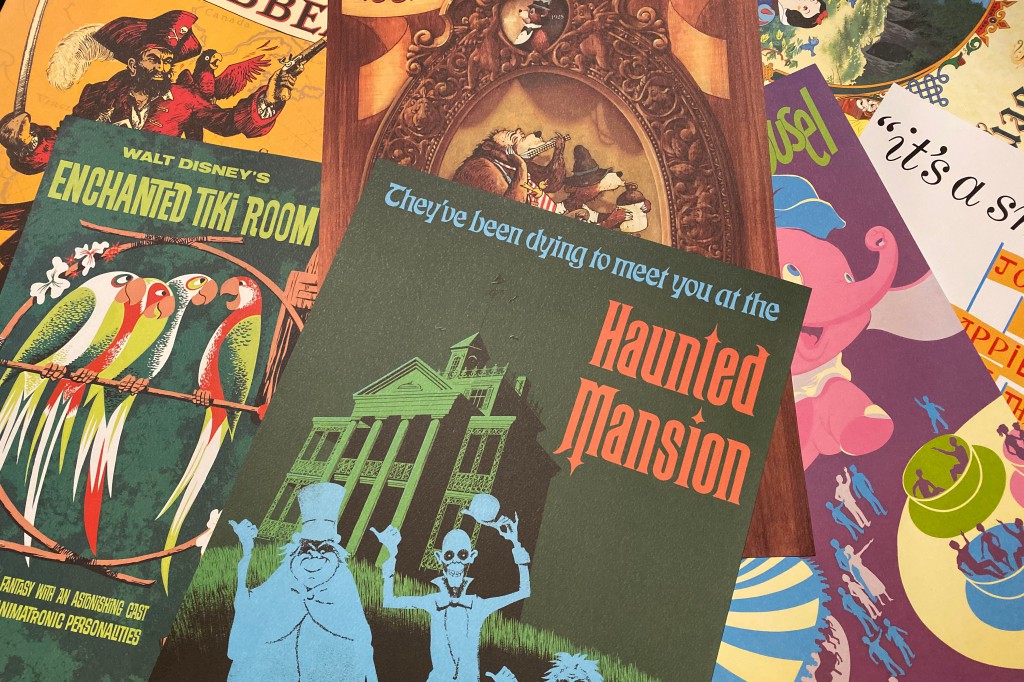 Over the last few weekends, I’ve transformed our Disney bathroom from a generic Mickey Mouse-look to a Main Street USA-themed space. I shared with you some of the hard work last time around, and now it’s time to show you the pay off.

First, in an homage to those iconic tunnels that take guests from the entrance plaza onto Main Street itself, I framed a couple of Disneyland attraction posters and added them to the faux brick wall.

I shared the possible options on my Facebook page and there was a lively discussion. It not only had to be a meaningful attraction, but also had to look good against the brick AND not clash with the poster next to it. I ended up picking Walt Disney’s Enchanted Tiki Room and Pirates of the Caribbean, and I’m pretty happy with that choice.

Of course, to paraphrase Walt, the bathroom will never be complete, so I could change my mind later.

The last thing I had to work on was the window, and I wanted it to be a focal point since it’s one of the first things you see when entering the room. This is Main Street after all, so the window treatment also had to fit the theme.

Since I wouldn’t be putting in blinds or curtains, I had to cover the window with a frosted film (because it is a bathroom after all). I ended up buying a huge roll of film that was way bigger than I needed and was probably pricier than it should’ve been, but when the store selection is limited, that happens. It wasn’t too hard to put on, but it still has a few bubbles that will need to work themselves out.

Next, I created a wood awning frame to go over the window. I’m not a carpenter, but I think it turned out okay. I covered it with a fabric in a color I thought was reminiscent of the Emporium. There were a few challenges and adjustments (and a bit of adult language) along the way, but it turned out pretty well. [Note: The picture below is not the final version.]

Finally, I had to deal with the windows themselves and the answer came pretty quickly: Windows on Main Street.

Instead of recreating some of the existing windows though, I made up some fake logos “honoring” me and my son, West. I got some assistance from my ex with the Cricut machine, and my ideas came to life.

West’s passion is band and music, so I think his window is perfect. The colors are awesome and it almost looks painted on. I couldn’t be happier.

The colors on my window, however, aren’t quite what I had hoped for. The dark blue on the top line doesn’t really show up at all, so I may end up changing it out for something lighter.

Still, I am so happy to see the vision come to life…and even happier that the entire room is complete.

Here are a few final pictures around the completed room.

I hope I was able to inspire you to take on a Disney renovation of your own. What room will you be tackling next??