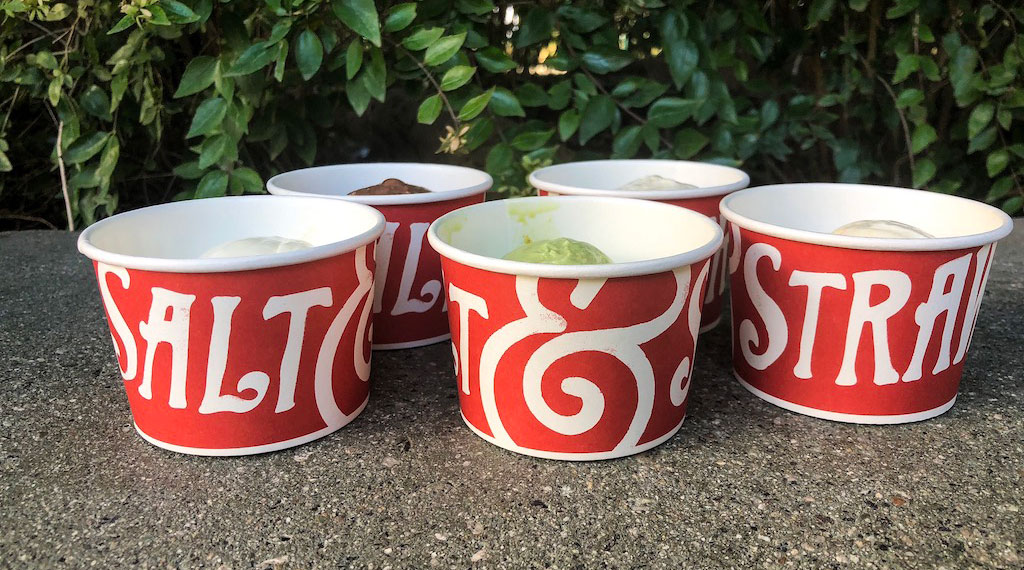 *The DIS publishes reviews of meals that we pay for. We only utilize discounts and offers if they are available to the general public, such as annual passholder discounts. We receive no outside compensation for our dining experiences so that we may give our honest opinions about price and value.

I scream, you scream, we all scream for ice cream! Salt & Straw is the latest addition to the series of new restaurants and shops opening in Downtown Disney at the Disneyland Resort. We cannot be happier for the newest change. Disney is really stepping up their game and finding unique out-of-the-box restaurants to join in the fun and show vacationers what is out there. Salt & Straw originated in Portland, Oregon and became a success; new stores have been gradually opening up over California and Washington. 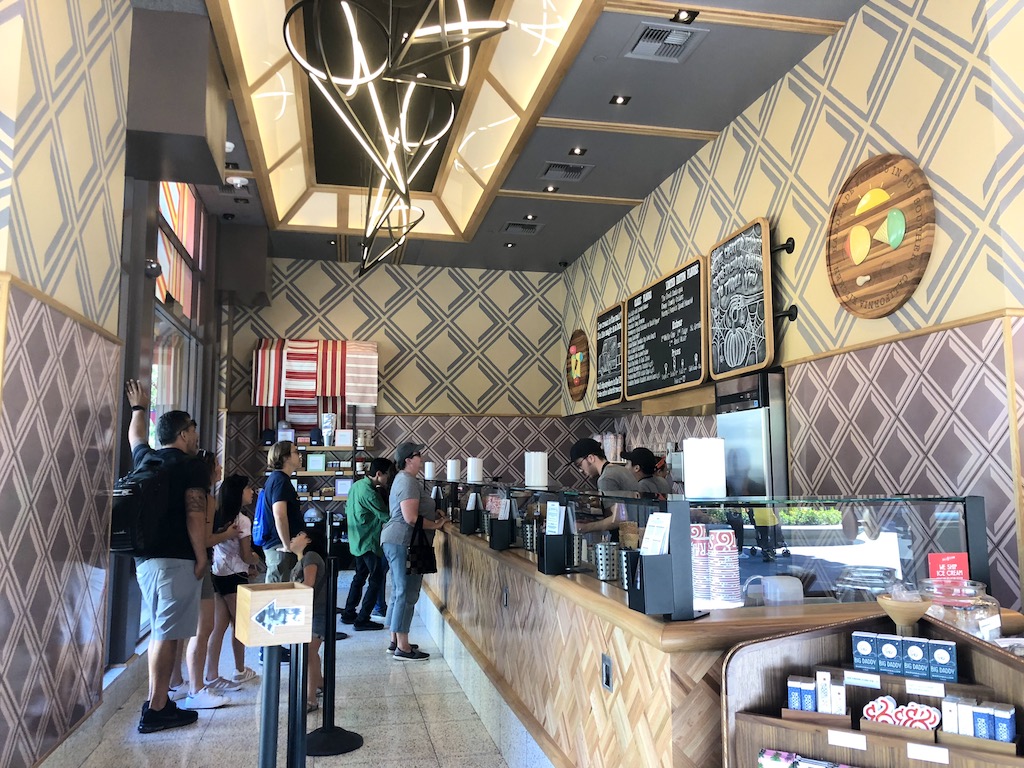 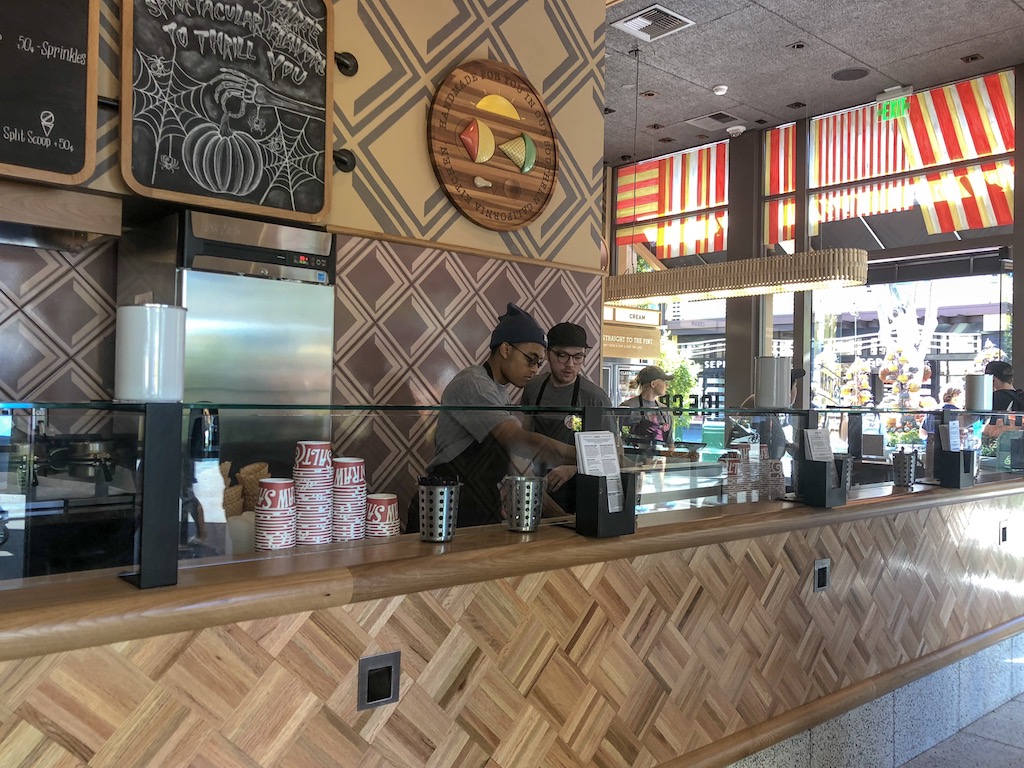 The service was exceptional and they could not be more welcoming. Our team member was out-of-this-world amazing and knowledgeable about the flavors, and about which ones were gluten free and which ones were not. He was inviting and asked if we wanted to try any flavors, and as tempting as that was we wanted to pick 5 different ice creams and keep our organic reactions for the camera. This delicious frozen treat is not like any other ice cream — Salt & Straw takes your taste buds on a whole new adventure with their artisanal creations. The ice cream is made in small batches, and they offer seasonal flavors which will change often and classic flavors that will be available year round. Changing up the flavors generates curiosity from their patrons and leaves them wanting to come back for more enticing flavors, which are made with local ingredients from neighborhood farms. 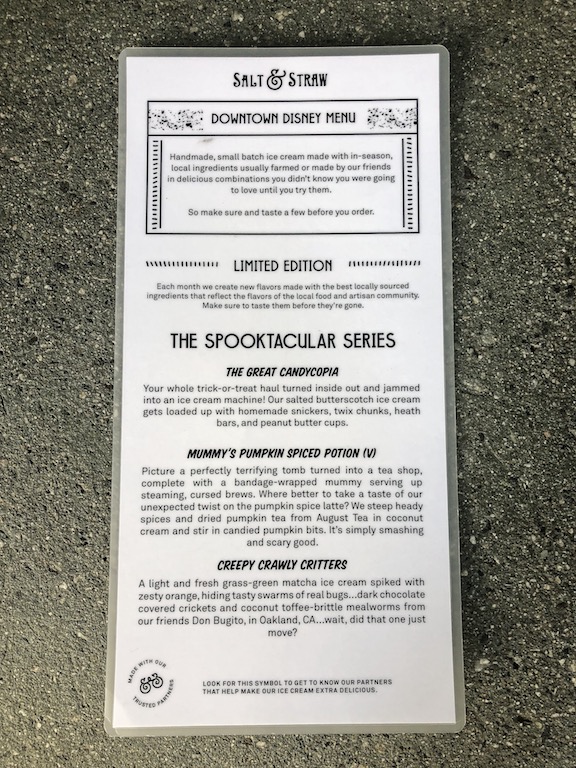 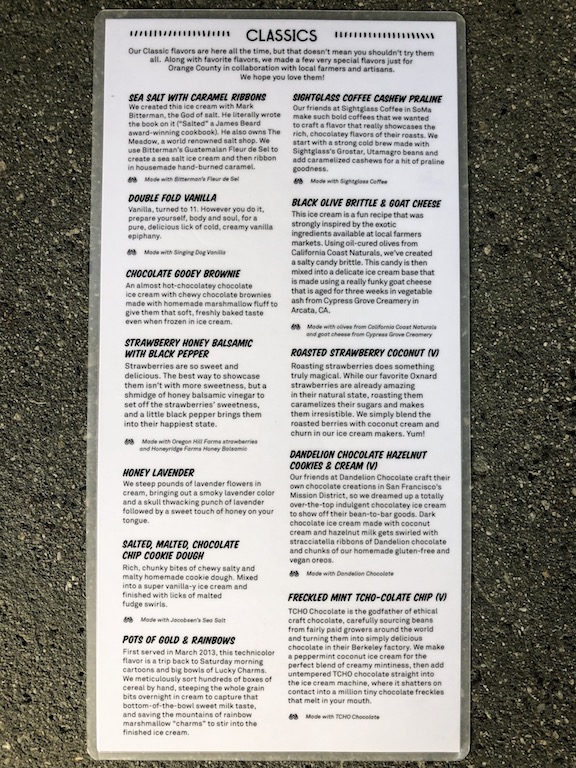 The menu has the most unique descriptions for each flavor; you will find some of those descriptions below with the flavors Tyler and I tried. Sea Salt with Caramel Ribbons: “We created this ice cream with Mark Bitterman, the God of salt. He literally wrote the book on it (‘Salted’ a James Beard award-winning cookbook). He also owns The Meadow, a world renowned saly shop. We use Bitterman’s Guatemalan Fleur de Sel to create a sea salt ice cream and them ribbon in housemade hand-churned caramel.” (Gluten Free)

This offering was full of layered flavors. The caramel hit us right upfront along with the cream, but the salt lingered on our taste buds for some time. Tyler thought it was good combo of salty and sweet but there was too much salt for his liking. I agreed with Tyler and thought it was a little too salty and the taste of the cream they used was a little gamy for my taste. Pots of Gold & Rainbows: “First served in March 2013, this technicolor flavor is a trip back to Saturday morning cartoons and big bowls of Lucky Charms. We meticulously sort hundreds of boxes of cereal by hand, steeping the whole grain bits overnight in cream to capture that bottom-of-the-bowl sweet milk taste, and saving the mountains of rainbow marshmallow ‘charms’ to stir into the finished ice cream.”

It tasted just like how it was described. Tyler’s face lit up like a child on Christmas morning. It brought him back to being a child and eating Lucky Charms. You instantly taste the sweet marshmallow charms, but as it stays on your tongue you start tasting the whole grain cereal bits mixed with creamy milk. Dandelion Chocolate Hazelnut Cookies & Cream: “Our friends at Dandelion Chocolate craft their own chocolate creations in San Francisco’s Mission District, so we dreamed up a totally over-the-top indulgent chocolatey ice cream to show off their bean-to-bar goods. Dark Chocolate ice cream made with coconut cream and hazelnut milk gets swirled with stracciatella ribbons of Dandelion chocolate and chunks of our homemade gluten-free and vegan oreos.” (Vegan and Gluten Free)

When I read that this ice cream had gluten-free “Oreos” that were homemade, I had to try it! They definitely switched up the normal cookies & cream we all know by adding chocolate and making it a blend of coconut cream and hazelnut milk. The rich dark chocolate is the first taste we got, and then the coconut started coming through. Tyler and I agreed that we didn’t taste hazelnut but the cookie chunks were prominent and fulfilled my yearning for Oreos. Tyler was not a fan of this flavor because of the coconut taste but I thought it was delicious. The ice cream itself was so rich that I only needed a few bites to satisfy my sweet tooth. Black Olive Brittle & Goat Cheese: “This ice cream is a fun recipe that was strongly inspired by the exotic ingredients available at local farmers markets. Using oil-cured olives from California Coast Naturals, we’ve created a salty candy brittle. This candy is then mixed into a delicate ice cream base that is made using a really funky goat cheese that is aged for three weeks in vegetable ash from Cypress Grove Creamery in Arcata, CA.” (Gluten Free)

Tyler and I were a little hesitant trying this flavor because we both like goat cheese and I love olives, but to put them in ice cream? It sounds so crazy that it just might work. Tyler was the first one to try it and warned me that I probably wouldn’t like it. I thought he was joking around so I took a bite and immediately had to spit it out. This flavor was not for me. I should have known from the way they described the cheese as “funky.”  It tasted like goat cheese with a heavy blue cheese quality and a light olive taste from the brittle. Not our favorite flavor. Tyler was the brave one and tried this creepy crawly ice cream with no hesitation. The matcha green tea was very refreshing and light; it had a great flavor, so that if you didn’t know what was in the ice cream you would most likely enjoy it. Little flecks of tan can be seen mixed in the green tea ice cream, which are the mealworms, and whole chunks of chocolate coated crickets are scattered within the scoop. I was too nervous to try a big bite so I tried a little nibble and I could honestly only taste the matcha, but I got in my head and grossed myself out of trying a bigger bite. 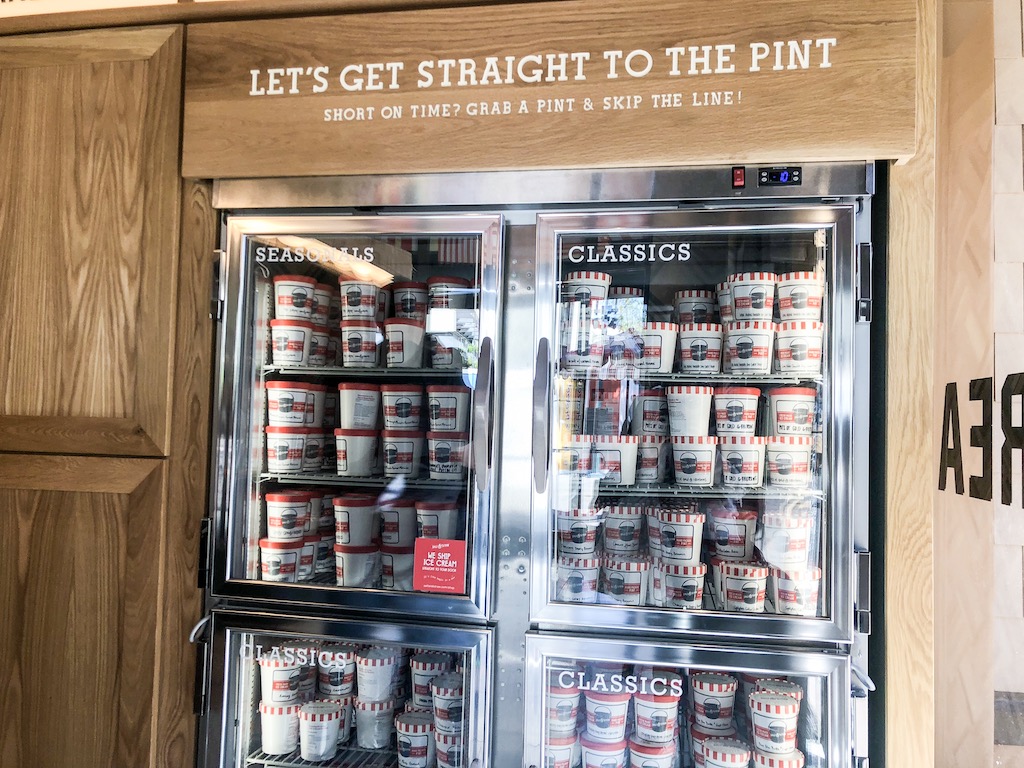 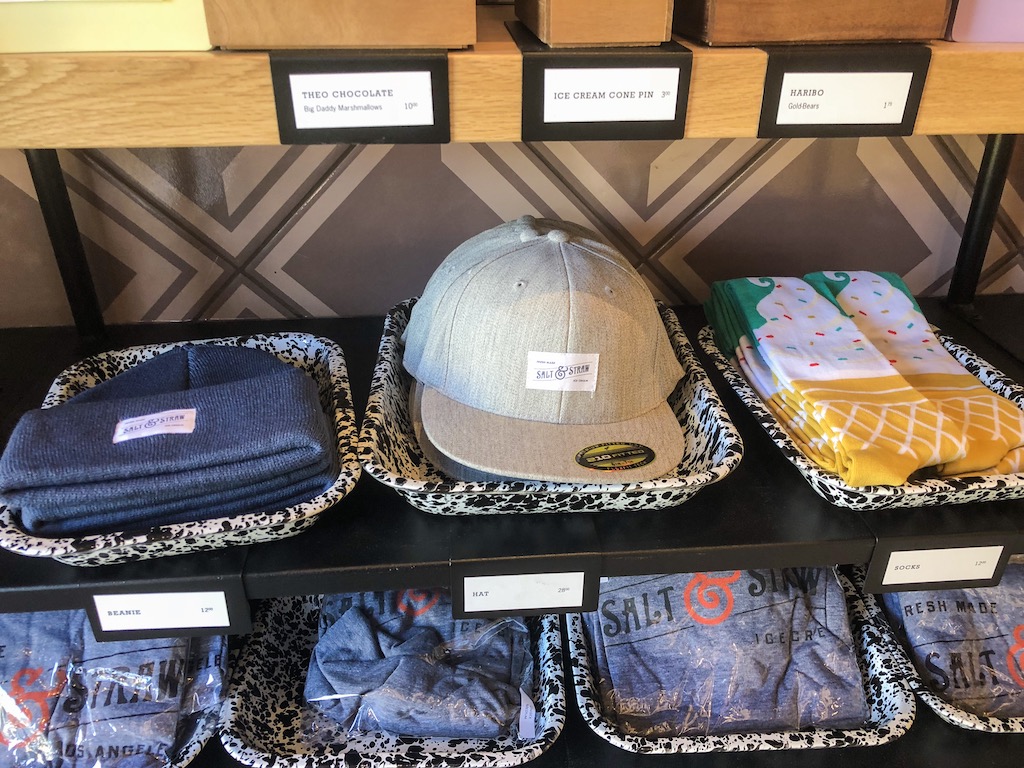 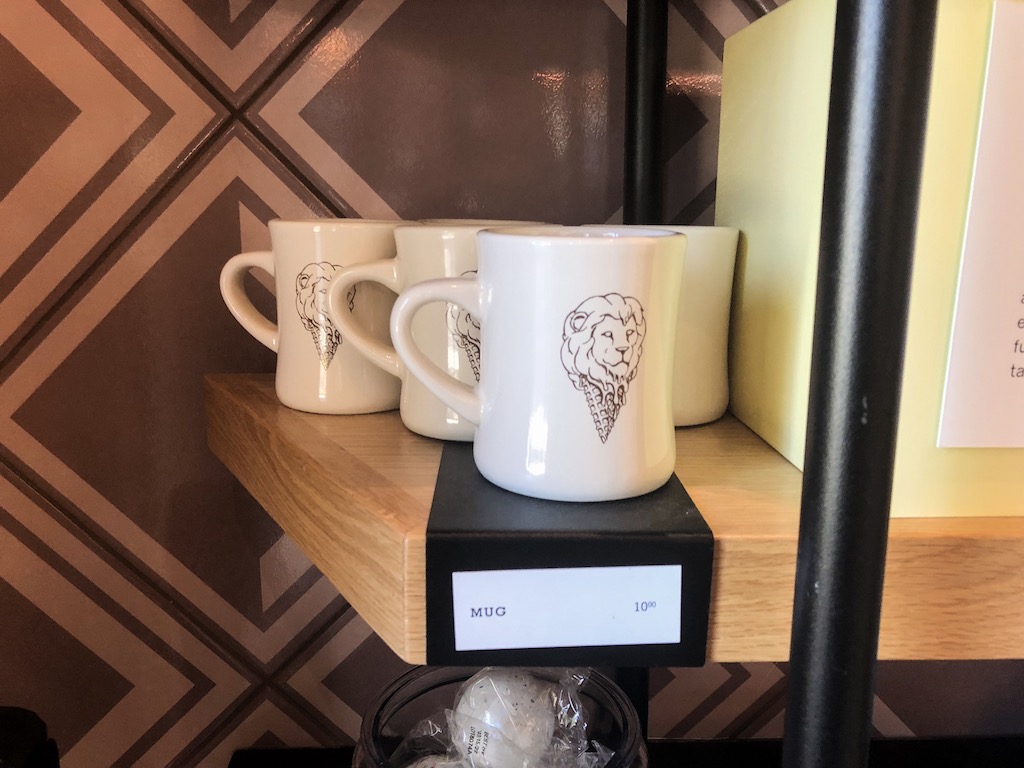 Even though I wasn’t a fan of most of the flavors we chose, that doesn’t mean that I will not go back. There were a few more flavors I want to try and with the seasonal flavors changing, you never know what crazy taste-provoking ice cream they will come up with next. If you’re looking to take some back to your hotel room or for a quick drive home, Salt & Straw has ready-to-go pints available and a special bag to keep that frozen dessert cold. If guests are wanting to bring the memory of Salt & Straw back home they have some merchandise for purchase.