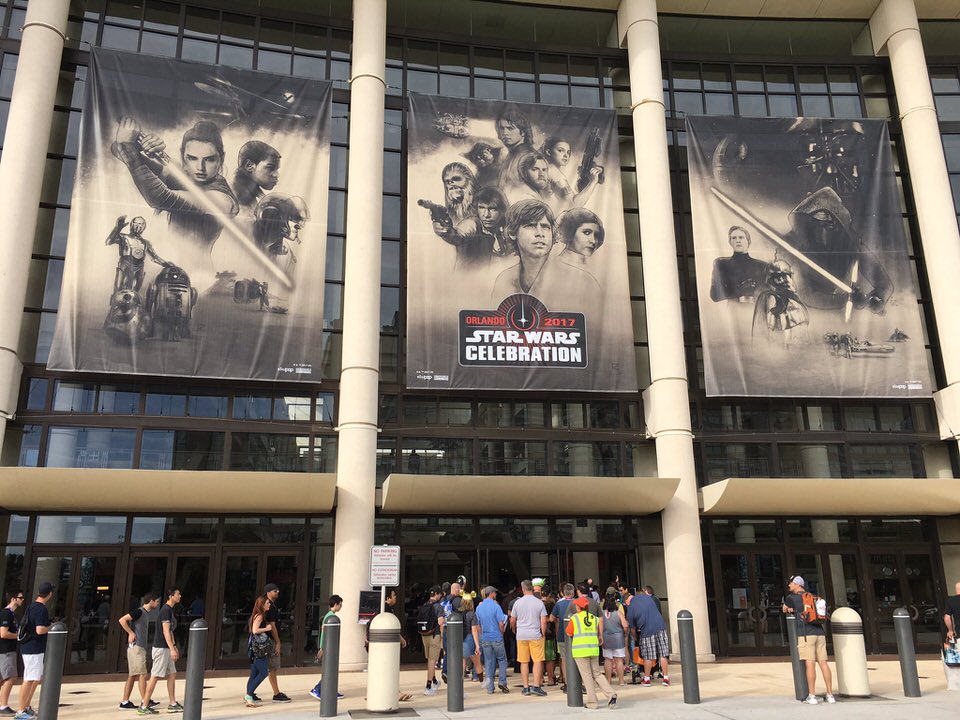 When you truly love something, you have to be willing to wait. I love Star Wars and that led me to spend 24 hours waiting on about 2.5 hours worth of entertainment that could’ve easily been streamed live from the comfort of my home. However, I wouldn’t have changed a second of it. Here’s a look at my experience from the first two days of Star Wars Celebration Orlando!

My experience with the ultimate Star Wars convention started on Wednesday night around midnight. I honestly did not spend any time planning or researching for this event beyond marking down which panels I was interested in seeing. At the top of my list were the main two events – 40 Years of Star Wars and Star Wars: The Last Jedi. If I would’ve taken the time to read the site, I would’ve known that queuing for 40 Years of Star Wars began at 8 pm on Wednesday, April 12. Instead, I discovered this information right around 8 pm and had a previous engagement that kept me from making it to the Orange County Convention Center until 11:45 pm. Even though the Queue Hall didn’t open until 8 pm, excited fans had started lining up beginning at 4:30 pm, meaning that I was already too late when I arrived. Actually Star Wars Celebration staff was few and far between when I arrived just before doors closed for the night at midnight, so despite being told that the main hall was filled for the event, I decided to stick it out hoping that the count would be off or extra seating would be available at the last minute. It didn’t help that others were saying that everyone who made it into the expo before doors closed at midnight would be guaranteed into the Galaxy Stage for the main show and not have to view one of the live streams in the other theaters.

I didn’t have time to properly prepare for my night sitting in the loud and fluorescent Queue Hall for Star Wars Celebration Orlando and that was part of my problem. All I had was a backpack filled with work equipment, a growler for water, an energy bar, and headphones. Needless to say, sleep was not really an option. Between the 1 am DJ dance party and the endless cheering from crowd lightsaber fights, I was only able to sleep about an hour on the cold concrete floor.

The Queue Hall was set to open back up at 5 am for guests who didn’t attend the sleepover and the wristband distribution for the main stage and livestream theaters was to begin at 6 am. The first interesting part was that no staff seemed to be around until about 6:10 am. On top of that, reports started coming in from the outside that lines were extending about a mile long due to only 6 metal detectors being used. Because of the lack of staff, when wristband distribution started some of the non-sleepover guests were able to sneak in line and secure a spot for the main stage.

Needless to say, I didn’t make it in the main hall by about 200 people. After 8.5 hours of waiting for a wristband, I had to accept that I would be sitting in a theater watching the livestream of 40 Years of Star Wars – something I could’ve done at home after a full night of sleep. The disappointment was real.

Still, getting to see the panel on a massive screen was very impressive. The panel was hosted by Warwick Davis and featured George Lucas, Hayden Christensen, Ian McDiarmid, Peter Mayhew, Billy Dee Williams, Anthony Daniels, Mark Hamill, and the surprise guest, Harrison Ford. The big takeaway from this panel is that the cast still vividly remembers making the Star Wars films, but George doesn’t making for some very awkward moments.

Billie Lourd, Carrie Fisher’s daughter, was there to pay tribute to her mother, which included a video that brought so many people to tears. The moment I became extremely jealous that I didn’t make it into the panel was when a side curtain was pulled back and revealed John Williams composing the Orlando Philharmonic through some of the best Star Wars compositions before closing with the Imperial March. My bitterness subsided, because everyone who made it into the main hall and overflow theaters was given a Carrie Fisher tribute poster as we left.

I then made a very important decision based on the 11 hours I waited for the 40 Years of Star Wars panel just to fall short. I made my way home to sleep for an hour, take a shower, and pack suitable supplies to camp out once again for the Star Wars: The Last Jedi panel. I made it back to the Orange County Convention Center at 7 pm on Thursday, April 13 to find a massive line. The rough estimate of people in line was somewhere between 1,000 and 5,000 fans who didn’t want to miss out on the debut of The Last Jedi trailer.

At 8 pm, the doors opened into the Queue Hall yet again and the craziness began to unfold. The line was very fair for the most part until reaching the metal detectors. Instead of forming lines, everyone just piled in the large room and pushed their way forward. Still, myself and Ryno made it into the queue for the main hall slightly after 9 pm and we were being told that we were approximately #1350 in line. This was great news, but then reality sank in that it would still be another 13.5 hours of cold concrete and $10 Papa John’s personal pan pizzas until the panel began.

However, at 11:30 pm, everyone in the Queue Hall was completely surprised when The Last Jedi director Rian Johnson came out to make an appearance. It seemed like Johnson was going to just do a quick walk around saying hi to fans, but he started taking photos and signing autographs for every single person approaching him. Eventually a human tunnel was formed for Johnson to walk through, and he spent the next 3 hours making sure everyone got either a photo, an autograph, or both!

Sheer exhaustion had sunk in by this point and I was able to get a few hours of sleep thanks to my extra preparation for the harsh world of the Queue Hall. By 5:30 am, expo staff started to arrive, which was very promising after the disaster that was Day 1, and by 6 am the wristband distribution started up. We had no reason to be concerned and by 7:30 am we received wristbands for the main stage for the Star Wars: The Last Jedi panel at 11 am.

The panel was an incredible experience from start to finish. If you haven’t watched it then I highly recommend watching the full livestream below. The panel was hosted by Josh Gad and featured Kathleen Kennedy, Rian Johnson, Daisy Ridley, John Boyega, Kelly Marie Tran, and Mark Hamill. We got to see incredible black and white behind-the-scenes photos taken from Rian Johnson’s personal camera along with the first teaser poster, and of course the debut of The Last Jedi teaser trailer. I cannot describe how amazing it felt to be in the room where it was debuted for the rest of the world. To know that no one else could ever have that singular experience for The Last Jedi again still gives me goosebumps. To top it off, we received a copy of the teaser poster that I may or may not have already framed.

So what’s my takeaway? Well, if these massively popular panels are what you are coming to see, be ready to wait A LOT. Not only that, be ready to sacrifice seeing some of the other panels throughout the day or exploring the showroom, because you’ll be spending time resting and showering before the next sleepover, unless you are a robot and push yourself through to the point of illness. What will you get if you make this choice? Well, I have new memories from this event that I will never forget. With two full days left of Star Wars Celebration Orlando, I hope I can make it to some of the smaller panels that I haven’t had the chance to see or explore the showroom and maybe do some shopping, but if my Star Wars Celebration ended today, it would end with me being a happy camper.

There may be issues with lines, expo management, and more, but Star Wars Celebration is the ultimate expo for Star Wars fans and it is 100 percent worth the headaches involved and I will gladly add my name to the guest list for the next one that I am able to attend.