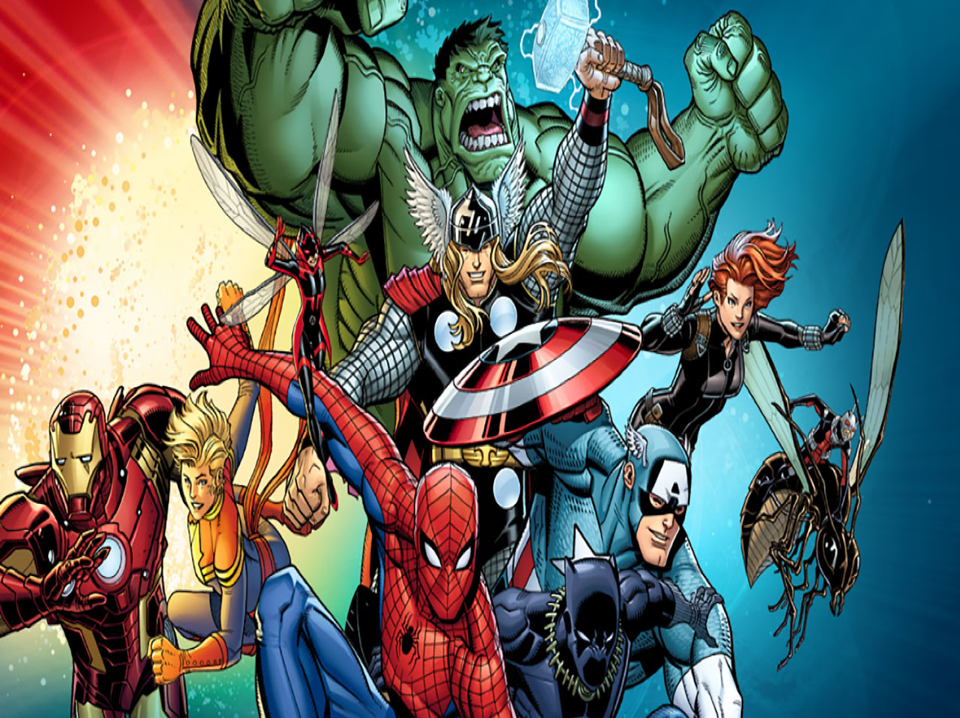 DIS Contributors review entertainment that they have paid for during their own vacations. They only utilize discounts and special offers if they are available to the general public. They receive no additional compensation for experiences or events, so that they may give their honest opinions about price and value.

The Marvel Comic Universe has become increasingly important to the World of Disney, with beloved films such as Guardians of the Galaxy having an ever-increasing presence in Disney Parks around the world; from the Marvel Day at Sea on Disney Cruise Line, to applicable Character Meet-and-Greets, and of course, incredibly successful movies. Disney fans have come to love characters such as Doctor Strange and Black Panther, but the Marvel Comic Universe (MCU) — largely created by Disney Legends Stan Lee and Jack Kirby — has a long history as a prominent part of American Culture.

Marvel: Universe of Super Heroes, which opened on April 13th at The Franklin Institute in Philadelphia, is one way to learn about the history of Marvel, the evolution of beloved characters such as Spider-Man, and see some of the costumes and props used in wildly successful films like Captain America.

Per The Franklin Institute, the purpose of the exhibit is to chronicle “…the story of Marvel and its influence on visual culture, while also uncovering the narratives of individual characters such as Captain America, Spider-Man, Black Panther, Captain Marvel, and Doctor Strange.”  It features “…more than 300 artifacts, including some of Marvel’s most iconic and sought-after pages, costumes, and props. Spectacular artifacts to thrill both avid collectors, and casual fans — while immersive set pieces, soundscapes, and interactive elements bring the comic book world to life!” 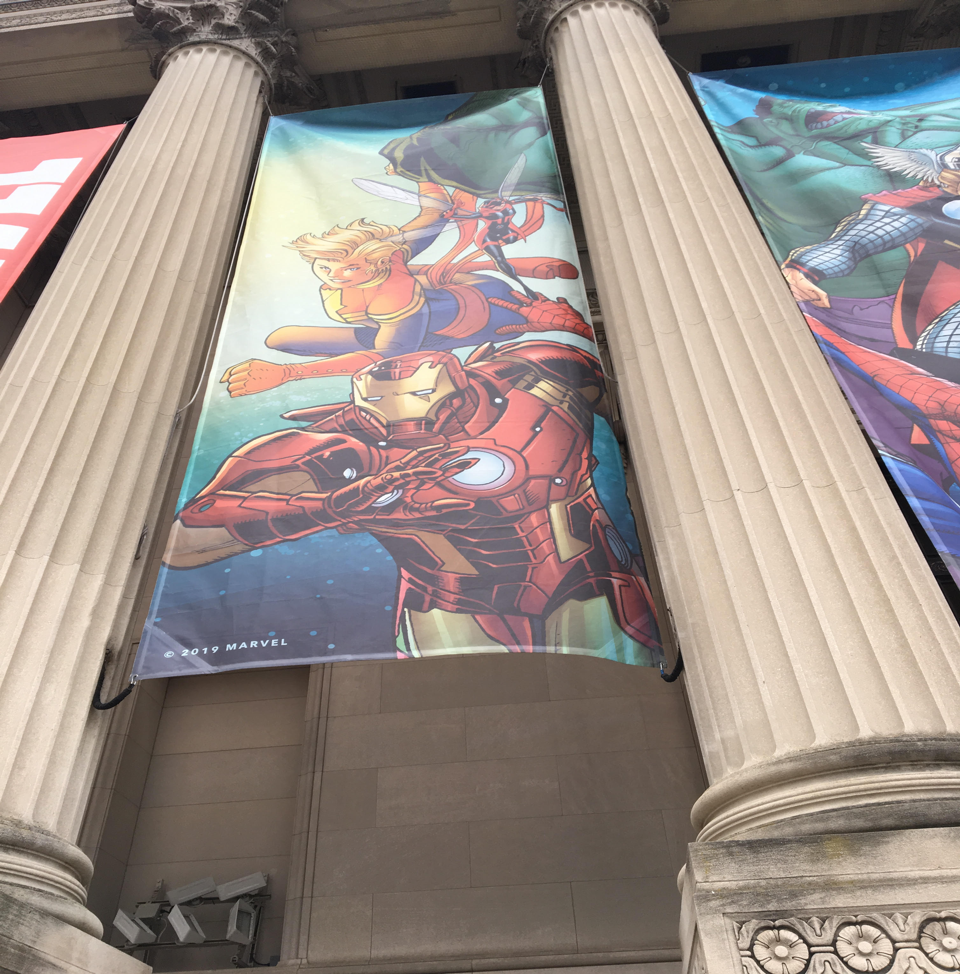 We paid $35 a person for admission to The Franklin Institute, which included general admission and the exhibit. The admission is timed, as this is a special event, and we entered at 9:30 am (opening time). I went with my sister, Ashley, and my soon-to-be brother-in-law, Nate. Nate is a big fan of Marvel and similar, I am more in the category of a casual fan (except for Ant-Man, which I love), and my sister is essentially agnostic to the subject matter.

When you enter, there is a five-minute video which explains the history of comic books, their place in American culture, and provides a basic overview of how the characters and mediums have evolved over time.

One then proceeds through to the main area which shows very early sketches of super heroes, including a copy of the first Marvel Comic book from 1939. Sketches of super heroes, especially Captain America and early characters such as the Human Torch, are on display. We also learn about the history of comics and the challenges they faced during the socially rigid 1950s, including the 1954 Comics Code, which outlined what content was acceptable. One learns about Stan Lee’s doubts in continuing in the medium at all, as well as how groundbreaking much of the content and super heroes were. 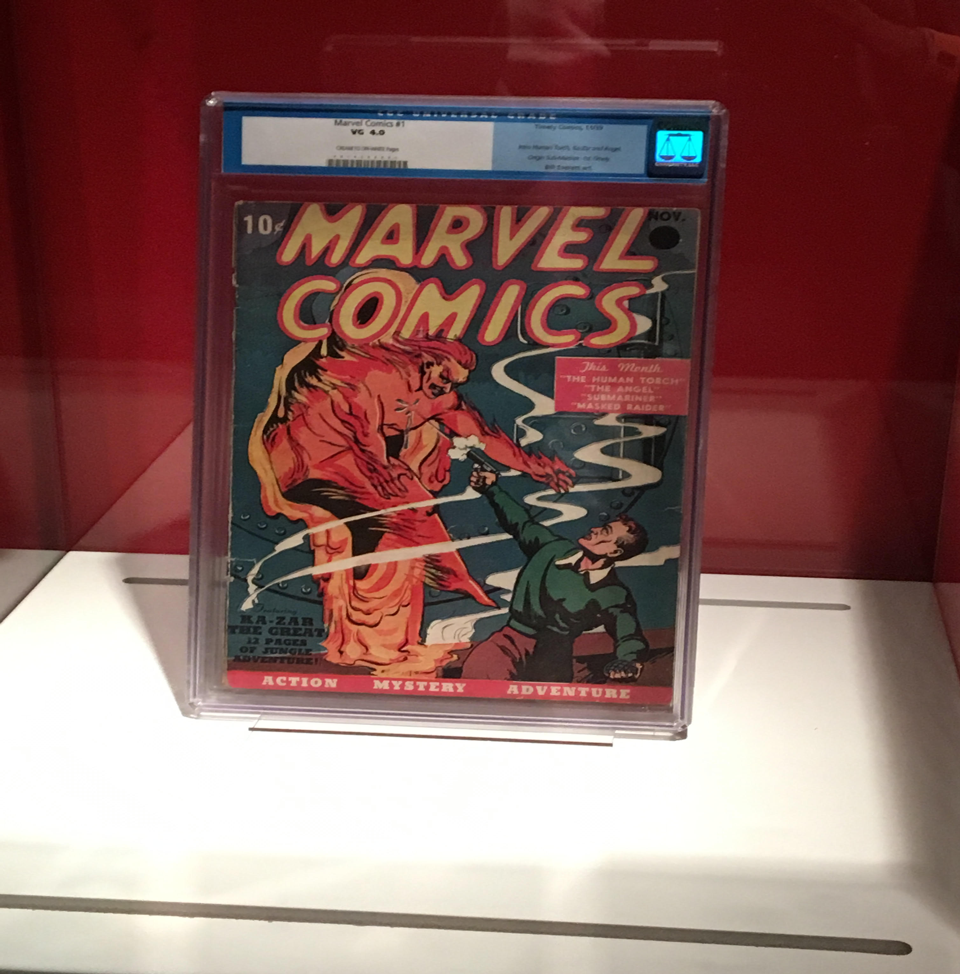 The rest of the exhibit presents Marvel by having areas dedicated to each super hero and their associates. Super heroes featured included Spider-Man, Doctor Strange, Captain America, and Groot. Sketches and comic strips (the 1960s seemed prominently featured) were shown, along with explanations of where the hero came from and their story. As we moved along and the decades advanced; most characters ended with several costumes and/or props from recent movies. While Stan Lee, Jack Kirby, and other animators of course got mentions and recognition, the focus of the exhibit is actual super heroes. Seeing the props from the movies are very cool and enriched the overall history provided.

Music was playing which I believe was from the movies, however, I cannot assert that with any certainty. Either way, it provided some energy, and really helped add some immersion. There were examples of what the artists’ desks may have looked like, as well as examples of comic strips and covers.

A variety of experiential and interactive elements were available throughout. In the portion dedicated to Doctor Strange, there was an area that was meant to replicate one of the alternate dimensions. It had vivid colors, lights, and mirrors to really immerse you. There was also a machine where you vote for your favorite character (lacking Ant-Man, however). 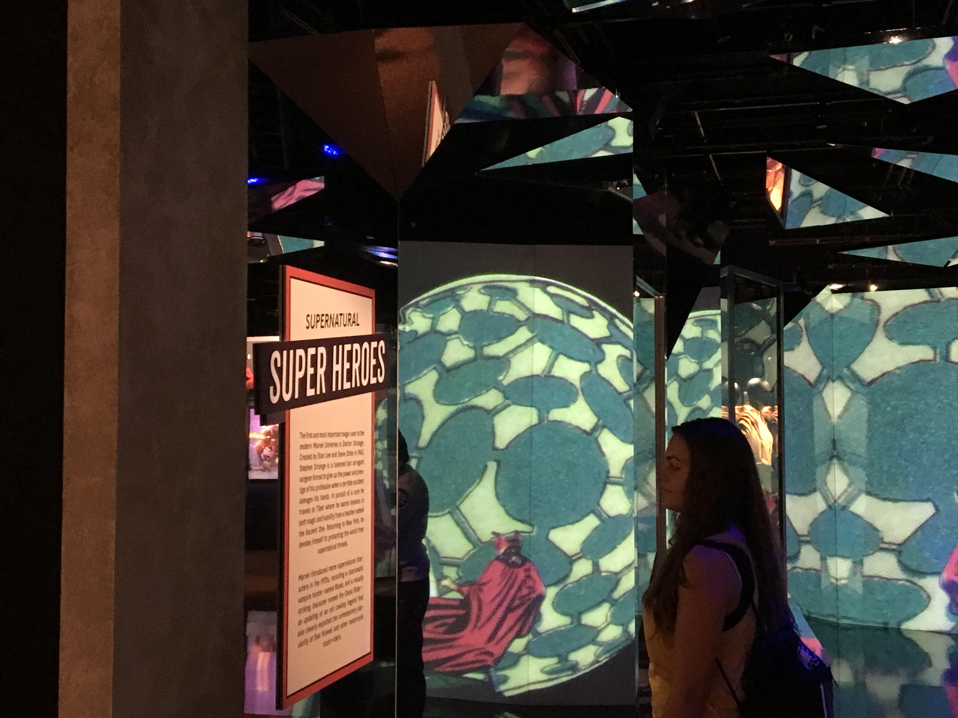 Enter one of the Alternate Dimensions of Doctor Strange

The Franklin Institute was a massive part of my childhood, and my mother would take us to every special exhibit at least once, as well as going through school. One of the things we had to do for school is write seven paragraphs (three to five sentences each) outlining things we learned. This could absolutely be done with this exhibit — especially the early portion, talking about Marvel’s history and the evolution of characters over the decades. There was ample staff (and security) on hand to make sure everything ran smoothly.

There are replicas (perhaps the wrong term) of many characters which offer great photo opportunities. These include Black Panther, the Hulk, and Spider-Man. While it is not quite my area of interest, people (and especially children) seemed to really love it. My sister, who has extensive experience working with children, indicated it is the sort of thing they love, as it gives them the opportunity to be able to really touch and look at things. Their interest would fade very quickly if it included just looking at things on the wall. Also, great posters are available throughout which offer excellent picture opportunities. Different consoles show details of the animation process and how a comic strip is put together. 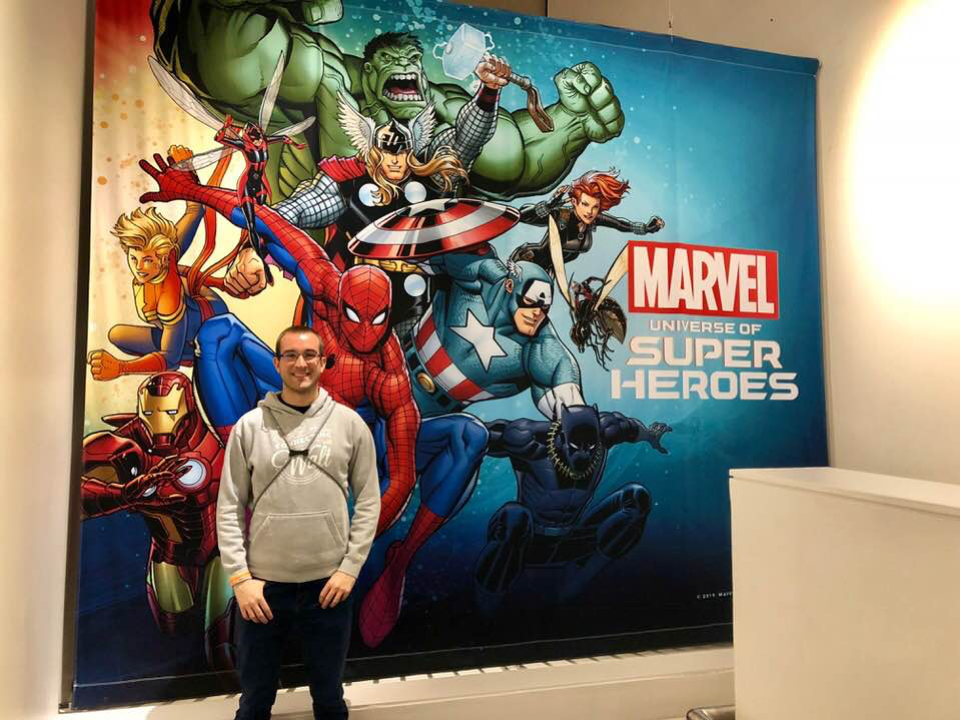 Many great photo opportunities were available.

There were many great aspects of this exhibit, and it was overall an excellent experience. I was a little concerned it would essentially be an advertisement for the movies, and be a whole bunch of movie memorabilia, but this was not the case at all. Yes, there was movie memorabilia, but it was a very small aspect of the overall experience and part of telling the story of these characters. The exhibit did an impeccable job telling the story of Marvel as a whole, as well as each super hero. You could see how characters have changed and been adapted for comic books, television, and movies. 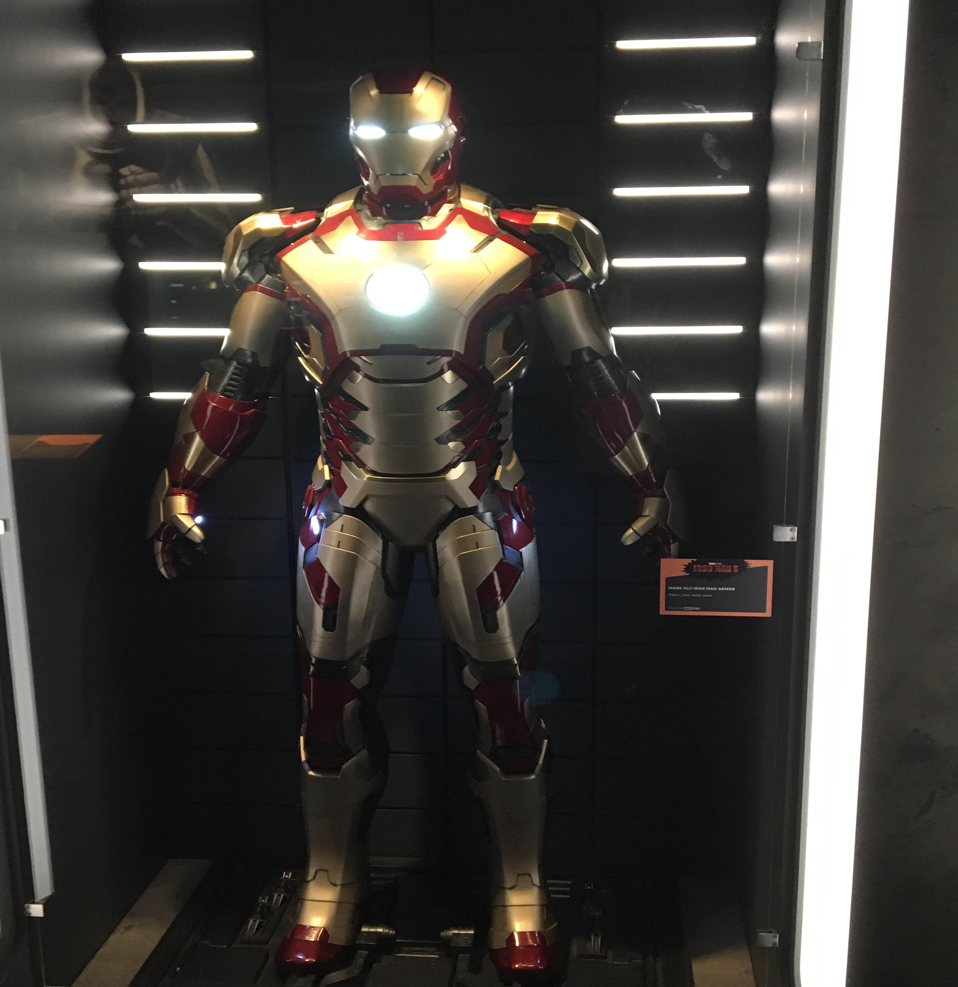 The Suit from Iron Man 3. The other iterations are also on display.

Marvel: Universe of Super Heroes was very honest and blunt about how characters have evolved over the years. For example, they talked about Luke Cage, the first African-American Marvel character, and how he was inspired by the Blaxploitation genre popular at the time, but also how he has evolved. One can acquire an appreciation of the past, and understand how Marvel is sensitive to modern sensibilities and changes to match current taste.

The other is the short-shrift that Ant-Man received. Ant-Man’s area of the exhibit was incredibly modest. There was some kind of digital display, but no costumes, uniforms, or replicas. I am biased in this, as Ant-Man is my absolute favorite Marvel character, blowing anyone else out of the water. But not one costume? And at the end of the exhibit I had to walk back through to the see the small area dedicated to him, because I initially missed it. (Of course, I could have missed something, but I doubt it.) It was disappointing, but as any Disney fan knows, “Disappointments are to the soul what the thunderstorm is to the air.”

I would give this exhibit a 9/10, with one point deducted for the criticisms indicated above. Marvel: Universe of Super Heroes could be a great part of a day visiting Philadelphia. It took us about an hour, but our group did not largely consist of huge Marvel fans overall and we were there at opening before crowds built. With varying levels of interest in Marvel, we all enjoyed it.

As a quick aside, there are eleven other permanent exhibits at the Institute, including a massive heart you can walk through (almost impossible as a 6’2” adult), and a planetarium. There is also the Tuttleman Imax Theatre — at 70-feet-across and 4.5-stories-high, it makes for a thrilling viewing experience. It can even serve as a good test if you have gone a long time without being on any attractions due to motion sickness, such as Soarin’ or Avatar Flight of Passage. Nearby places to visit include Eastern State Penitentiary (can’t visit Philly without visiting somewhere abandoned) and the Mutter Museum. Philadelphia also includes Independence Hall and many other similar places to visit to give a little taste of Liberty Square. So, if you live in Southeastern Pennsylvania or South Jersey, this could make for a great day trip, or a diverse and illuminating long weekend for those living in the Mid-Atlantic or Northeast.

Overall, this is an excellent exhibit which I would highly recommend to any fan of contemporary movies, animation, American history or culture, or anyone with any interest in Disney. I loved it, and I am middle-of-the-road in terms of being a Marvel fan. Many different Facebook groups and things I saw had comments decrying the exhibit as lacking in the scientific and educational value that one expects from The Franklin Institute (before it even opened). As someone who went there constantly as a child and teenager, I can say that while the exhibit was not necessarily scientific, it was educational. If you are a Marvel fan, or a child who loves these characters, I imagine this exhibit would be particularly remarkable.

Please refer to The Franklin Institute’s website for information regarding pricing and ticket availability. It is in town till September 2nd, and many time slots are already sold out. The Franklin Institute is very easily accessible via Regional Rail, and located in a very safe, well-manicured section of the city at 222 North 20th Street. Do not forget to wear your DIS t-shirt or hoodie (they are very comfortable, durable, and politely priced)! 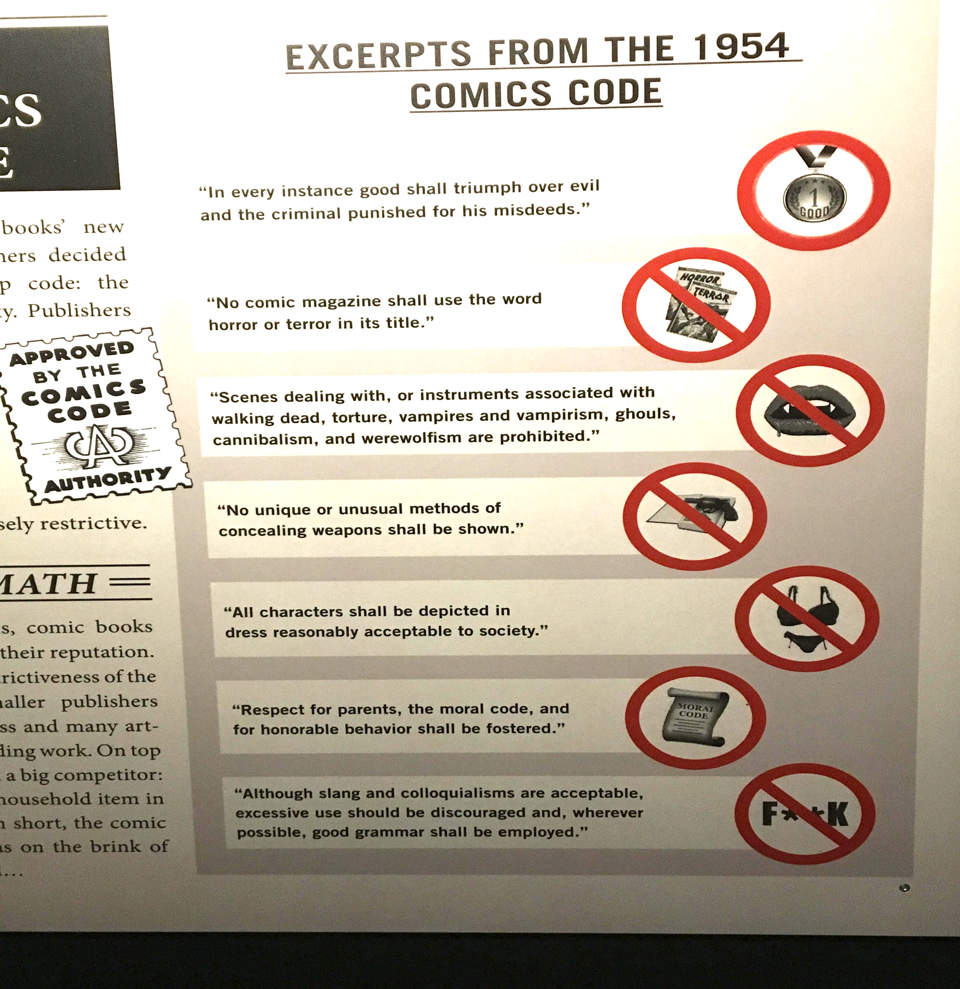 The 1954 Comics Code, reminiscent of the Production Code applicable to Hollywood from about 1934-1968. 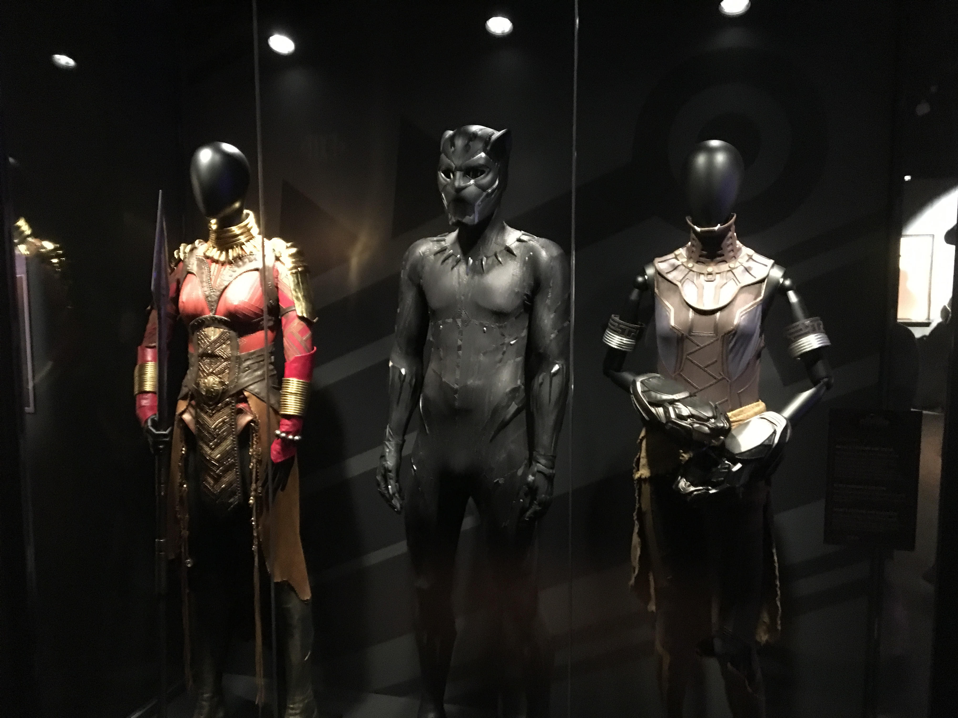 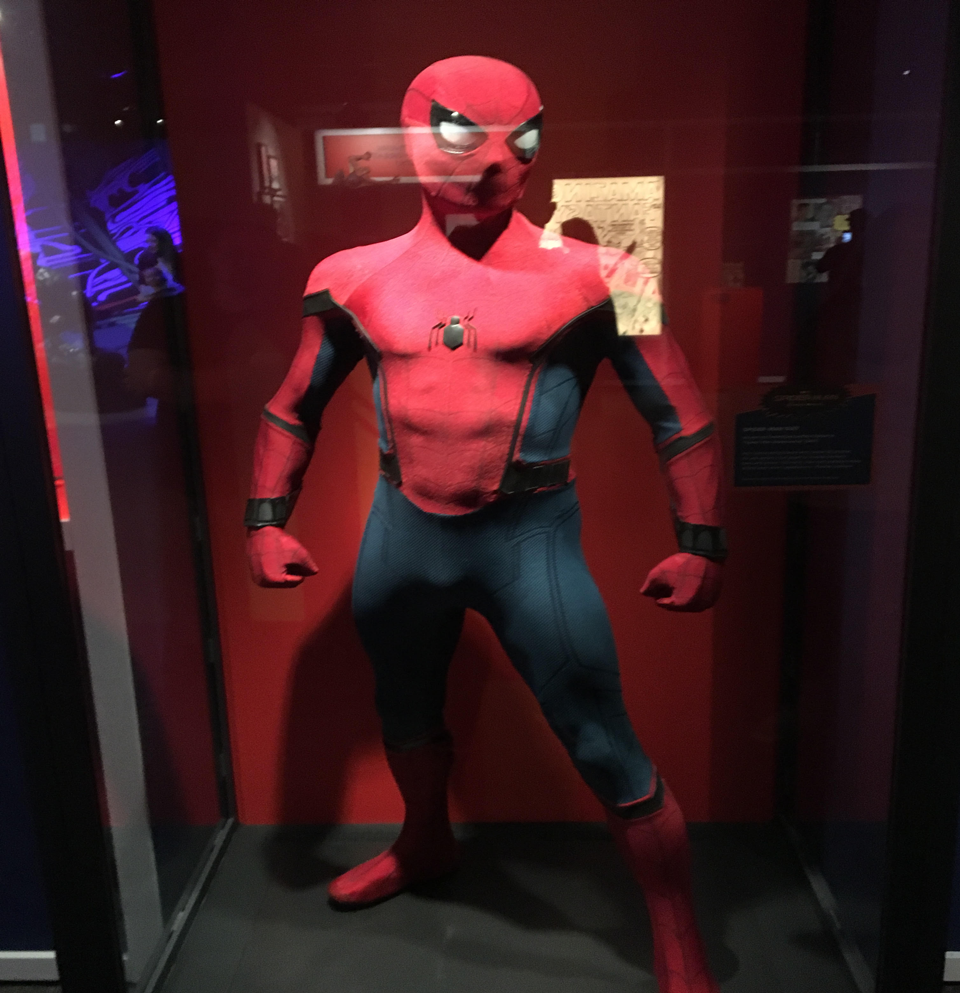 Spider-Man. An upside down Spider-Man is also available for photo opportunities. 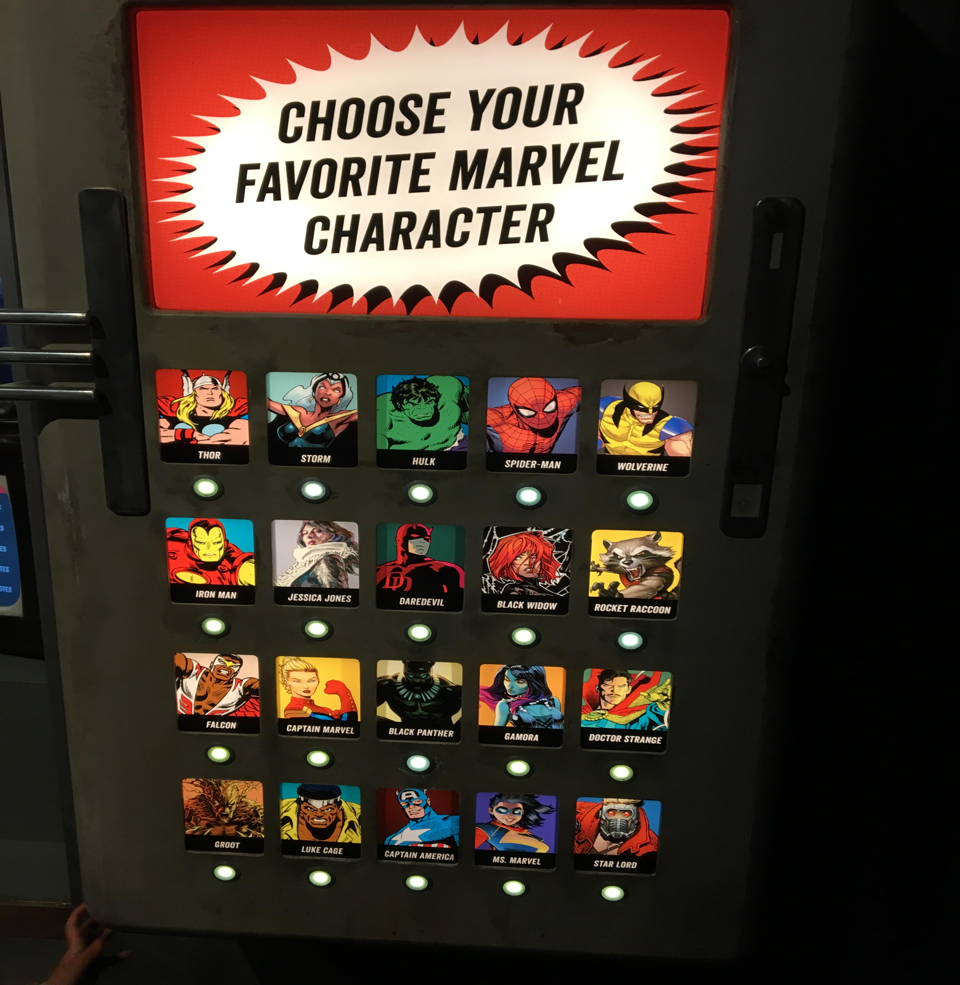 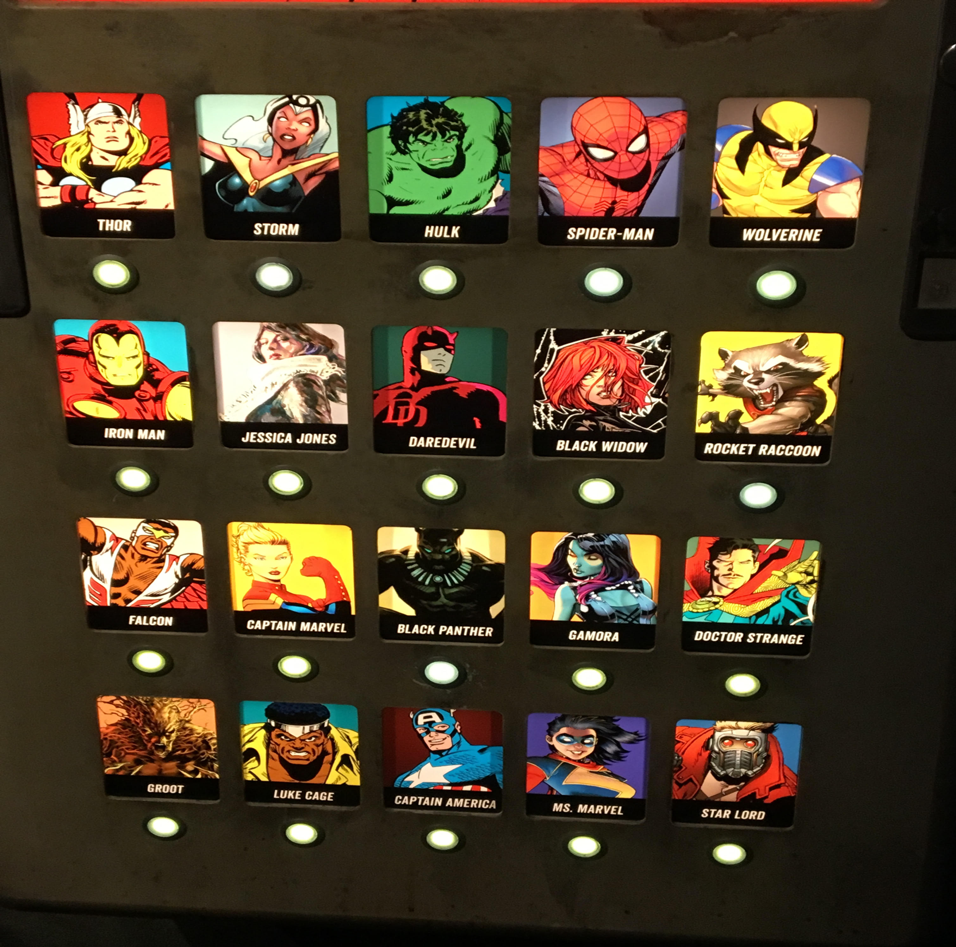 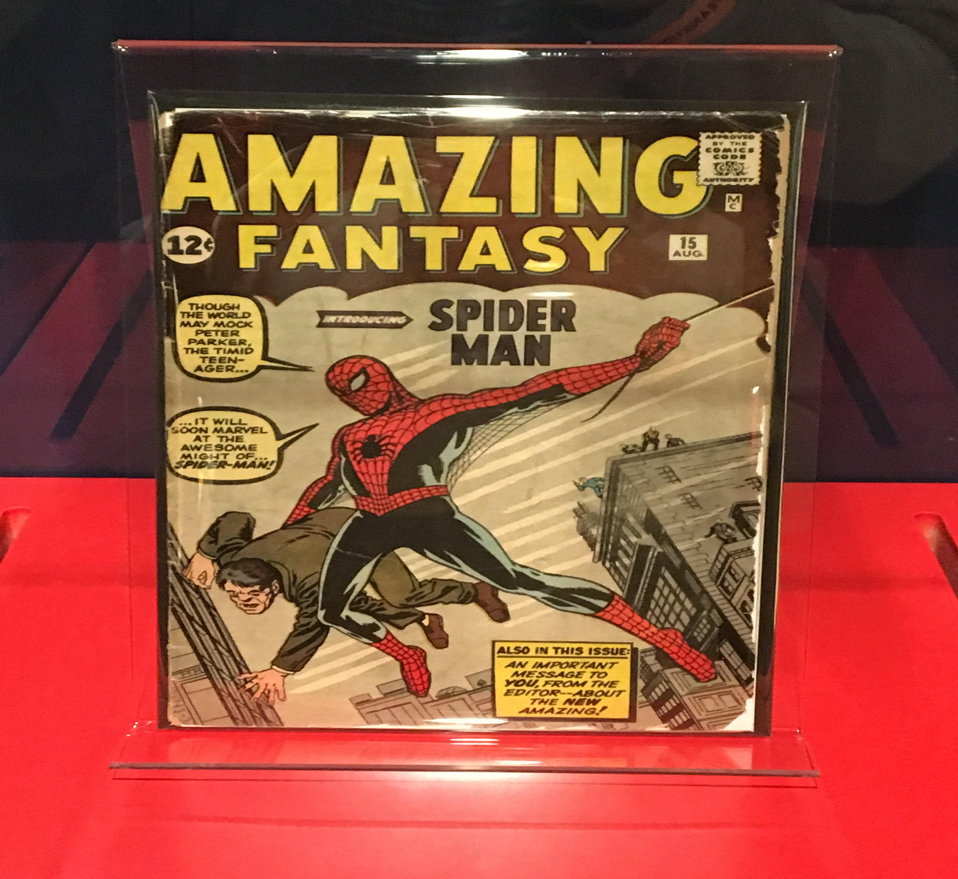 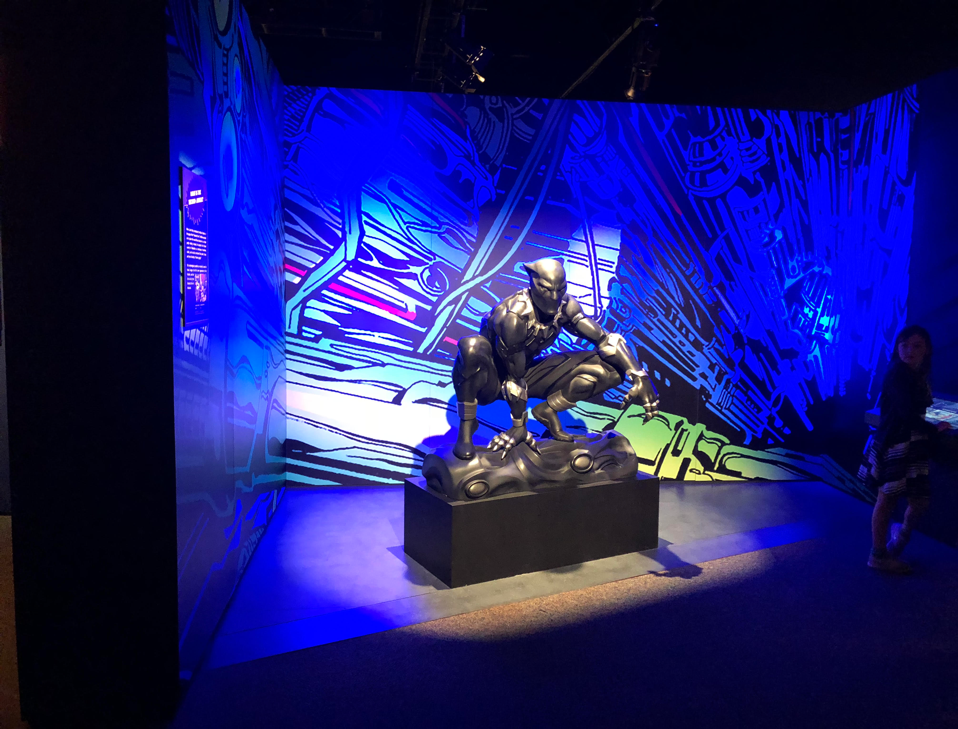 A photo opportunity with Black Panther is available. 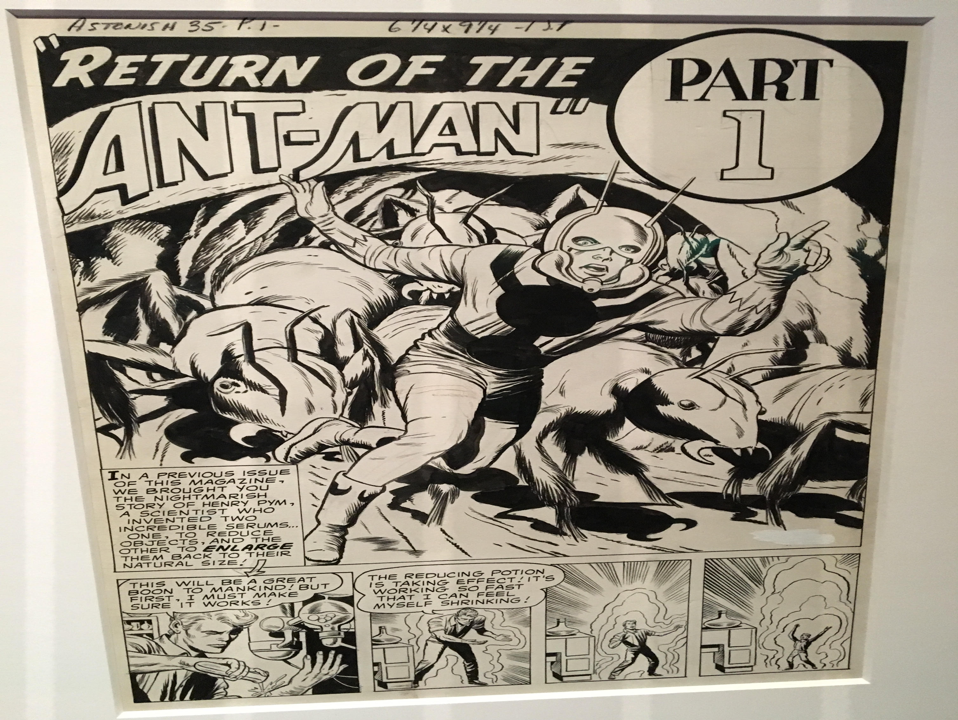 Animation from an Ant-Man (1962), the first time the character was fully drawn in this costume by Jack Kirby. 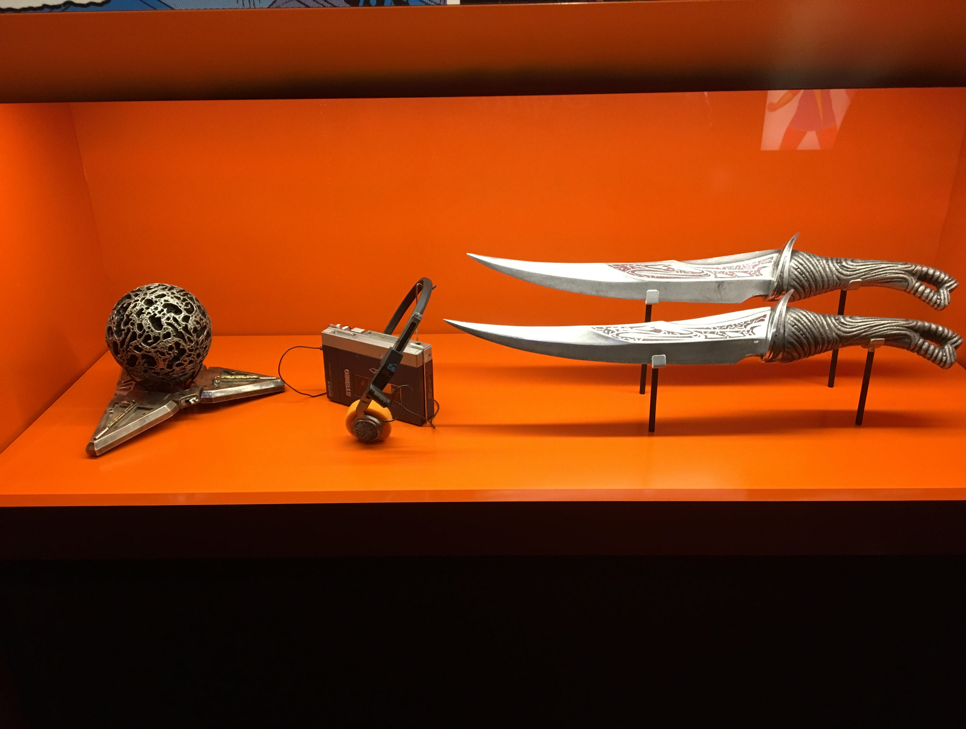 Various props from Guardians of the Galaxy 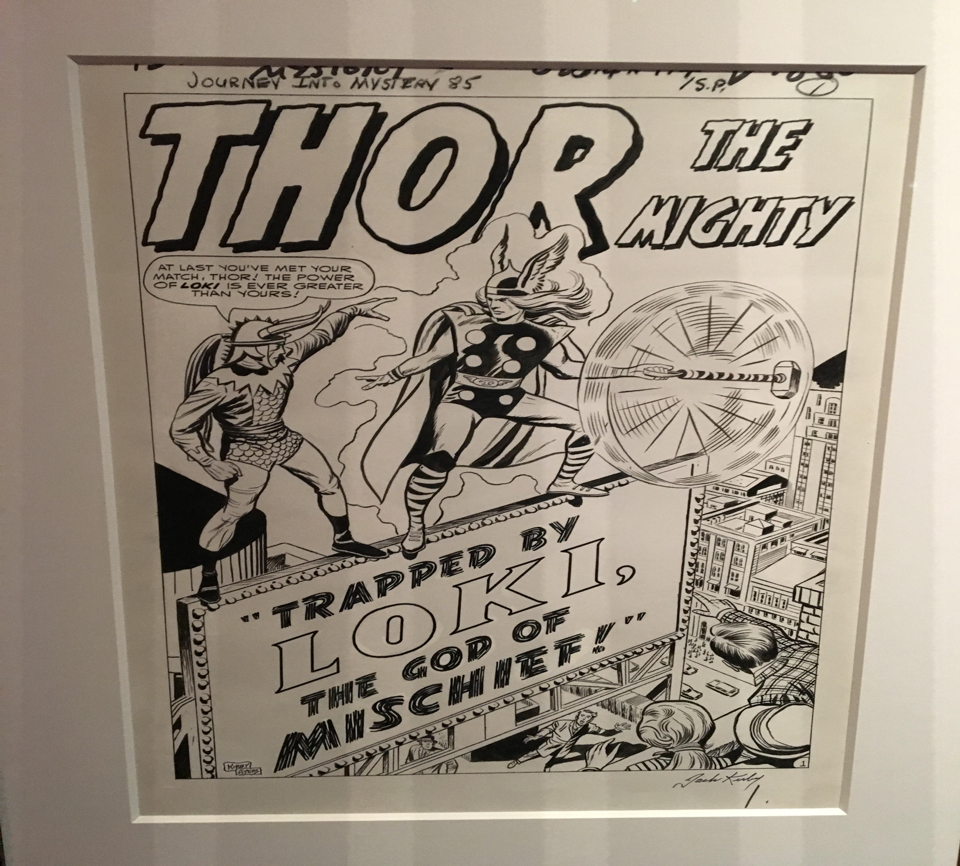 A much different Thor from 1962 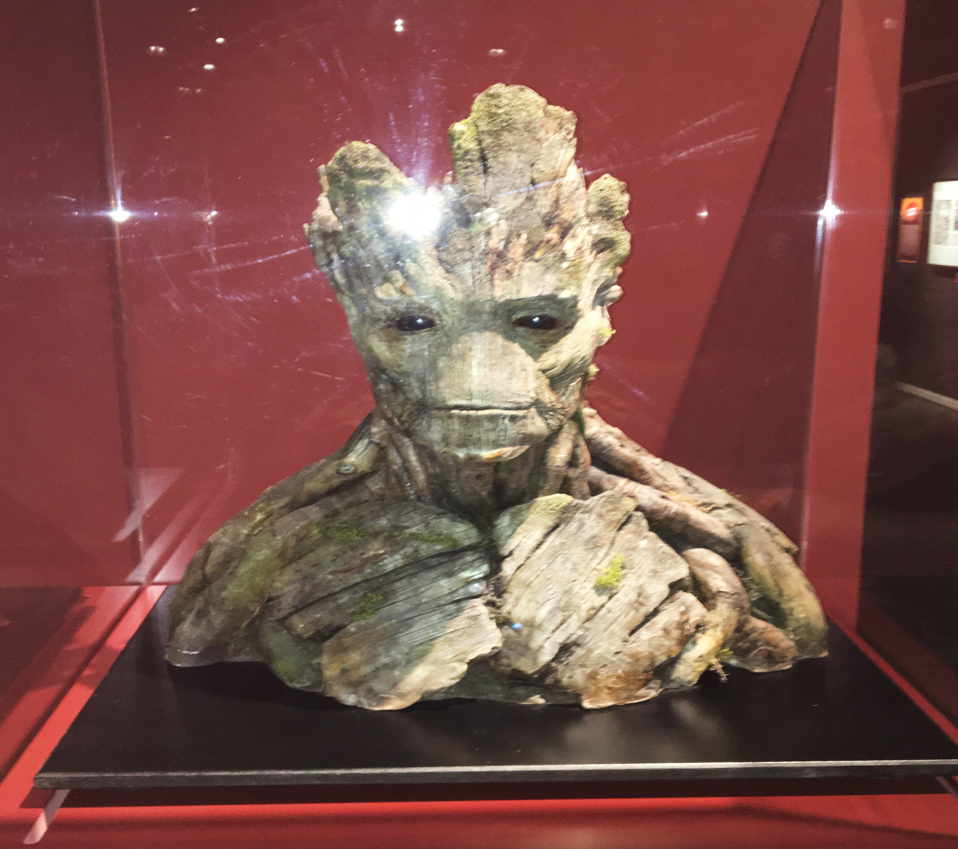 A teenage Groot which look just like real wood. 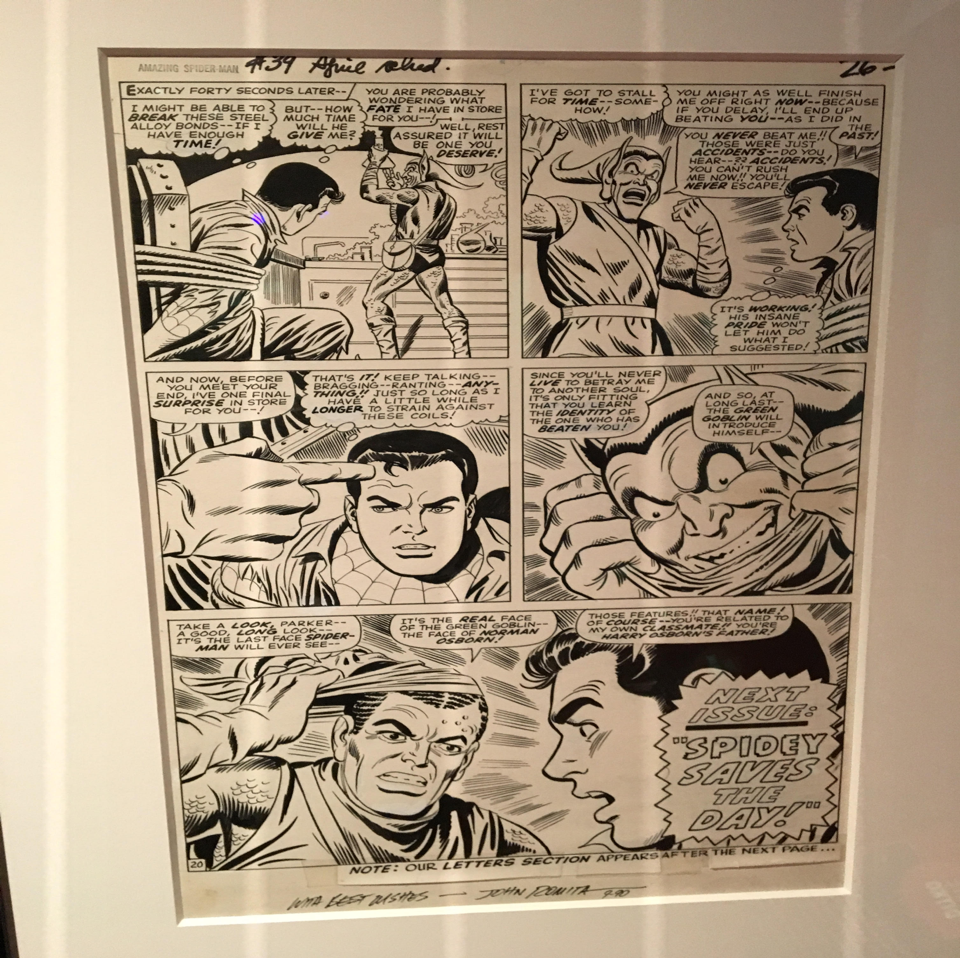 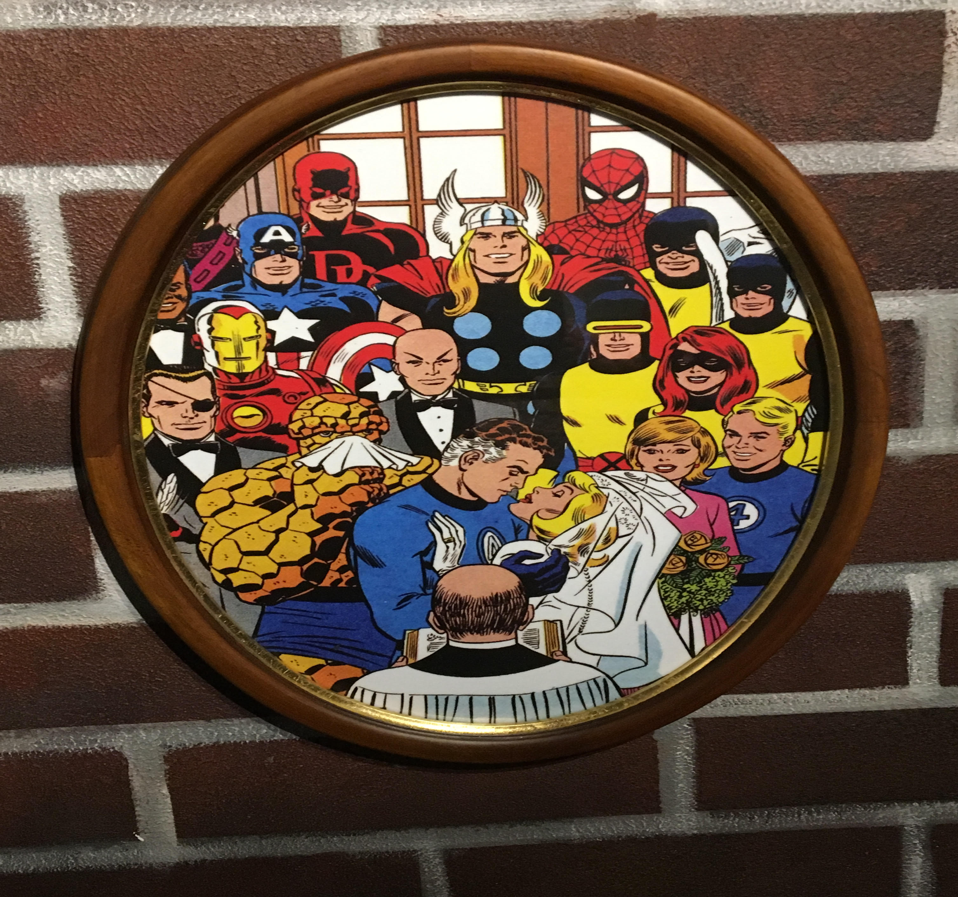 These characters sure have changed over the decades!