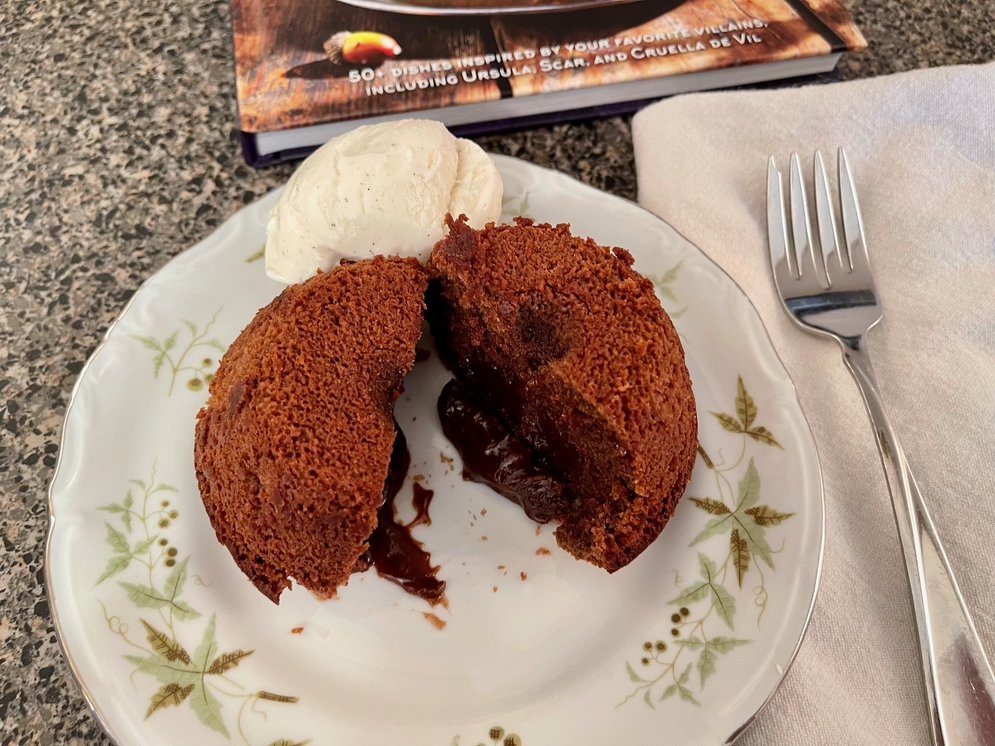 Friends, we have reached that point in the calendar year where, despite what the weatherman tells us, Disney declares it to be the next season. Thus, in the sticky, humid heat of mid-August, fall has begun in the Magic Kingdom, and into autumn we must go. It seems only appropriate with the debut of the new Disney After Hours Boo Bash this past week that we also invite a snack inspired by one of Disney’s biggest baddies, Chernabog, into our kitchens this weekend. While Chernabog didn’t make an appearance at Boo Bash, some of his fellow Disney villains did (I just loved hearing “It’s Good to be Bad” and seeing them float by in their cavalcade), and since Chernabog’s snack is a deeply chocolatey Molten Lava Cake, I think it’ll the perfect thing for the first weekend of “fall,” don’t you?

And a quick note as we get going here: don’t you just love a recipe that is simple and sweet? It’s the perfect thing for a weekend snack, and this one certainly delivers. And, while we’re at it, here’s a little bit of foreshadowing: the recipe calls for us to pair our Molten Lava Cakes with whipped cream. Now, if you’re a whipped cream over ice cream person, that’s your call to make and I respect it. If I’m the one making the call, ice cream wins out EVERY SINGLE TIME. So we’ll be pairing today’s treats with vanilla bean-speckled ice cream. It only makes sense. I digress.

The most exotic ingredient required for today’s Disney Villains Devilishly Delicious Cookbook recipe is a teaspoon of espresso powder. I’ve mentioned before that, thanks to the pandemic, I now keep instant espresso powder on hand at all times. And I now have it in both decaf and regular for those times that I want to sleep but also want espresso. It’s a win-win.

You’ll also need a couple of tablespoons of bittersweet chocolate chips, and while I had semisweet chips in the pantry, I needed to pick up a fresh bag of the bittersweet variety. If you don’t already have them, you’ll also need four 6-ounce ramekins for this recipe. I can’t tell you how much I love my ramekins. My husband and I use them for literally anything and everything. If you don’t already have them, take a peek on the internets and treat yourself to a few. You’ll be using them for all the things in no time, trust me.

First things first: this recipe, and pretty much any recipe, is going to go a little bit faster if you and I measure the ingredients out and prep things ahead of time. And you and I get to pretend that we’re Rachael Ray or Bobby Flay while we’re prepping our mis en place, and we’ll have much more fun just dumping in the ingredients when it’s time to actually combine everything rather than measuring things out in the heat of the moment. That being said, I ended up doing a bit of a hybrid of both techniques during this recipe. I measured out the chocolate chips, and cracked open the two whole eggs and added in the three egg yolks ahead of time so that they were ready to go when the time came, but measured out the others as I went along.

We’re going to begin today’s recipe with a technique that we’ve used very recently, and off and on throughout the Saturday Snacks series: melting chocolate using a double boiler method. The recipe asks for us to grab a medium mixing bowl and set it a top saucepan that’s filled halfway with water. My favorite bowl to use when melting chocolate is on the smaller side, so I went ahead and decided to play a little fast and loose with things and hope that it would ultimately be large enough. Spoiler alert: it was very close to not being big enough, but I made it work. I’m nothing if not stubborn.

Once everything is gloriously glossy and melted, take the glass bowl off of the top of the saucepan. And please, for the love of all things weekend, throw a few of those leftover bittersweet and semisweet chocolate chips into your mouth. You’ve made it through another week during this crazy year and a half, and you definitely deserve a treat.

Whisk one cup of powdered sugar into the bowl with your butter and melted chocolate. After the powdered sugar has been completely combined, you can add in the two whole eggs and three egg yolks, and, again, whisk to combine thoroughly.

You’ll then add your teaspoon of vanilla, teaspoon of espresso powder, and half cup of all-purpose flour, stirring completely between each additional ingredient.

I did end up taking my whisk to the batter when, after a really good stirring, things remained lumpy. The whisk definitely helped smooth things out.

Give your four 6-ounce ramekins a good coating of cooking spray and then pour the batter into each ramekin in even amounts. See how simple that was? You are this close to freshly-baked, amazing chocolatey goodness, and it was so quick and so simple.

Pop the ramekins into a 425° oven and bake them for 15 to 17 minutes until the edges are nice and set and the centers remain soft. I set my timer for 15 minutes started cleaning up the kitchen.

When the timer chimed, the most glorious little chocolate cakes came out of the oven. We’re to let them sit for five minutes and then serve them with either whipped cream (no) or ice cream (yes).

If your cakes need a little coaxing to come out of the ramekins, simply run a sharp knife around the edges.

Turn your cake onto a plate, and you’ll be good to go.

Friends, when I cut into the first Molten Lava Cake, the most lovely glossy chocolate came oozing out of the middle. It was literally perfect. That’s exactly what you want to happen with a lava cake.

While the recipe says to let the cakes stand for five minutes, my advice would be to not let them go one minute over five. As the lava cakes sit around, the molten lava center starts to get absorbed by the cake that surrounds it. You want to cut into the middle of those little cakes and have gooey glorious chocolate come oozing out. That being said, even if your lava is absorbed by the cake, it’s still amazingly good and very fudgy.

In retrospect, I would likely take them out of the oven 1 to 2 minutes sooner the next time that I make them. And there will be a next time, believe me. I’ve made molten lava cakes time and time again (including California Grill’s classic version), and this recipe tops them all in ease of construction and overall taste. So simple. So yummy. So good.

So, did you and I just find the perfect Disney villain-inspired autumnal weekend snack? Yes. Yes, we did. If you were sitting here in my kitchen, I would give you a high five. And I would also give you a Molten Lava Cake with vanilla bean ice cream.

The cake is firm, moist (my apologies to Ryno), and deeply chocolatey. The rich and creamy chocolate that fills the cake is just perfect.

Whatever you have on your plate this weekend, I hope that you’re able to make a little room on it for a Molten Lava Cake or two. Thanks so much for stopping by and reading! I hope that your weekend is an amazing one.

Ready to invite Chernabog’s amazing dessert into your own kitchen? The recipe is below:

The nefarious Chernabog presides over his kingdom of Bald Mountain, a dark crag rising into the sky. Winged beasties and fire sprites dance around him as the sky glowers. This is the land of the night, and towering above it, stands a molten mountain filled with liquid fire.

These rich and chocolate molten lava cakes are not nearly as scary as Chernabog. The “molten lava” inside is warm and melted gooey chocolate enveloped by cake for an irresistible dessert, made even more luscious with whipped cream or ice cream.