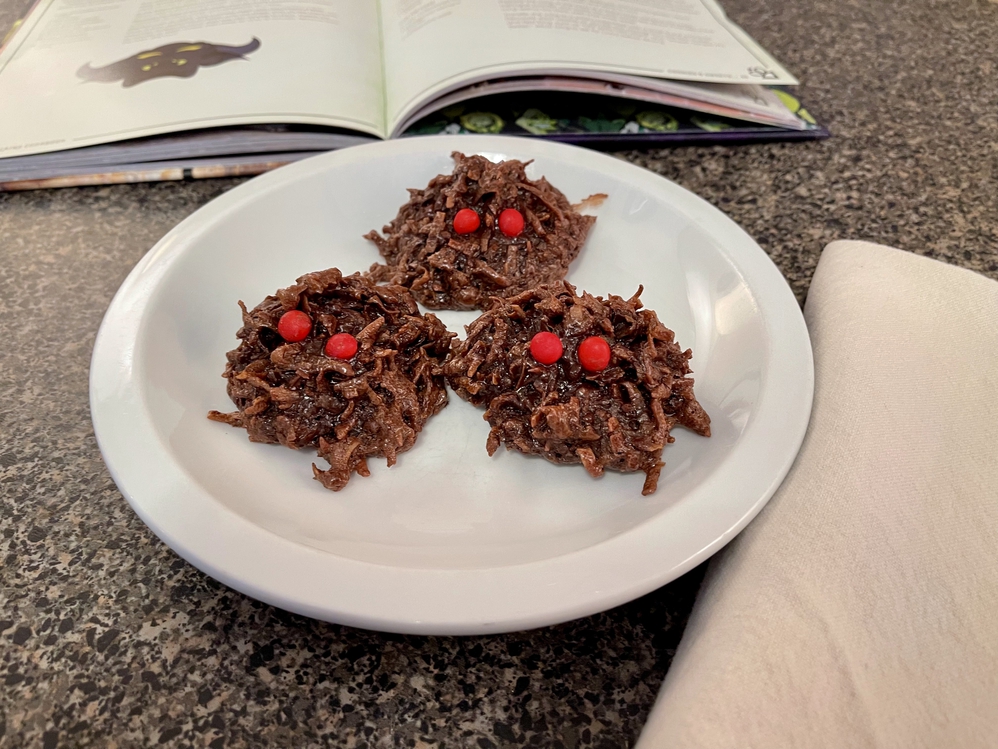 Friends, I have a confession to make. Up until very recently, I had never seen Fantasia. I know, I know. How could it be that I have lived lo these many years and not actually seen one of Disney’s most classic animated films? It’s a very good question, and one for which I do not have a good answer. Of course, I’ve seen snippets of Fantasia here and there, and throughout my time of finally watching the film, there were plenty of “aha” moments as I began to connect the dots between the orchestral pieces used in the film, their animated counterparts, and their relationship to the Walt Disney World parks. That’s where those ballet shoe-wearing ostriches came from… I knew about Sorcerer’s Apprentice Mickey (he’s my eldest’s favorite Mickey, and the day that he got to meet Sorcerer Mickey in Disney’s Hollywood Studios was a big one), but today’s recipe asked for me to focus on one of Fantasia’s other characters. One who was much darker and menacing than Mickey Mouse. I had to focus on Chernabog. This weekend’s recipe is the Disney Villains Cookbook’s Bald Mountain Cookies.

Picture it: Central Florida, October 2021. I’m sitting at my kitchen table streaming Fantasia on my phone (I know, not the best way to watch a film, but it is what it is and I stand by my choices). I’m waiting for Chernabog to appear on the screen so that I could understand him just a little bit more than not understanding him at all, and I waited and waited and waited. If you’ve seen the film, you know that it was almost TWO HOURS before I saw today’s featured character appear on that tiny screen. And who is he announced as being? He’s Satan. Ummm, okayyyy Disney.

As per the film’s conductor/narrator, “Bald Mountain, according to tradition, is the gathering place of Satan and his followers.” Is the Disney Villains Devilishly Delicious Cookbook asking us to make cookies that resemble Satan’s home?! Ummm, yep. That’s dark, even for the Disney villains. Sigh. Here’s the thing, friends, we’re making cookies that resemble mountains. You do you. I’ll choose to think that my mountain-shaped cookies are inspired by Virginia’s Blue Ridge and call it a day, thankyouverymuch. I’ll be calling them Chocolate & Coconut Haystack Cookies from here on out. ‘Cause that’s what they are. And we’re gonna keep Halloween light and fun in the Saturday Snacks realm. Whew.

But do you know what? (Picture me leaning in with excitement, because this thrilled me TO NO END when I took my first bite of the Chocolate & Coconut Haystacks.) Remember Disney’s Animal Kingdom’s all too painfully short-lived Everest Base Camp Macaroons? Friends, today’s cookies are THIS CLOSE to being miniature versions of those macaroons. I kid you not. I wouldn’t joke about such an important thing.

Our ingredient list for the haystacks is short; just what you and I need for Halloween weekend. You need to pick up a bag of sweetened shredded coconut if that’s not something that you typically keep on-hand. And, while the list is short, the very last item on that list caused me the biggest hassle. It seemed like it would be so easy to track down 24 pieces of red cinnamon candy. Would that it were so simple…

When “red cinnamon candy” was listed, I pictured Red Hots. You know, the candy that few seem to actually enjoy (my apologies if you do), and that are seldom found on the shelves next to the M&M’s anymore. Well, those little Red Hots are basically dinosaurs now. They just no longer exist.

I checked the candy aisles and cashier stand selections in two different stores and it wasn’t until I stopped by the grocery store with my hubby on Saturday evening to pick up ingredients for dinner that it hit me: could the red cinnamon candies technically be labeled as baking supplies? Could they now be found in and among the cake toppings?

I held my breath just a little bit as we made our way down the baking aisle until my eyes finally came to rest on a little shaker bottle of “Cinnamon Imperials.” Friends, I’m not sure who at the Betty Crocker company is labeling the baking supply bottles these days but bless their heart they have labeled the bottle of red cinnamon candy as “sprinkles.” Sprinkles? Really? If those are sprinkles, they are the largest potentially tooth-damaging sprinkles I’ve seen in my entire life. I digress. I grabbed that TWO DOLLAR AND TEN CENT bottle of ginormous sprinkles with zest because my shopping was finally complete for this week’s recipe. Good. Ness.

Our first step toward making today’s delicious cookies is to melt half of a cup of semisweet chocolate chips. I’m always nervous when a recipe asks that you and I melt our chips in the microwave because I haven’t always had the best of luck at getting the melting process to go smoothly. But I decided to take the recipe at its word and zapped them for 30 seconds.

When the 30 seconds was up, I gave the partially-melted chips a stir and placed the bowl back in the micorwave for another 30 seconds.

When the second chunk of time was up, I pulled the bowl back out and stirred the chips until everything was melted and smooth. Even though a good amount of chips weren’t melted by the end of the minute in the microwave, the heat from the chips and the bowl melted everything beautifully as I stirred. I set the bowl aside to cool to room temperature as instructed.

I now turned my attention to creating the rest of the cookie batter by dropping 3 egg whites into the bowl of my stand mixer. We’re to bring the speed of the mixer up to medium in order to beat the whites until frothy. Actually, truth be told, I initially dropped 3 whole eggs into the bowl of my stand mixer and, thankfully, the lightbulb went on before I got too far down the road with the wrong ingredients. Whew.

As I stood there with egg whites in bowl, I tried to look up the exact meaning of “frothy yet soft,” all to no avail. I decided to stop the mixer when I still saw bubbles on the surface and the whites had started to take form. I deemed that that would have to be good enough, and, thankfully, it was.

Once everything was combined and looking soooo chocolatey in the bowl of my mixer, I took the bowl off of the mixer stand and stirred in the 2 1/2 cups of sweetened shredded coconut and the melted chocolate chips.

When the mixture was fully combined (and I had taken a taste for research purposes, of course), I topped the bowl with a piece of foil and placed it in the fridge for 1 hour as the recipe instructed.

Now was the time that I had to stop and figure out which of my baking sheets could fit in my freezer. After the batter spends an hour in the fridge, the next step in the recipe asks that we drop 12 even spoonfuls of batter onto a baking sheet, form the mounds of batter into mountain-like shapes, press two of those sought-after cinnamon candies into each cookie and then place said baking sheet into the freezer for 10 minutes before baking. I have a side-by-side fridge/freezer (who was the person to think that one up?), so the freezer isn’t wide enough for all of my baking sheets. Thankfully, I had one that would do, and I proceeded to line it with a sheet of parchment paper.

When the hour was up, I pulled the batter from the fridge and formed the first six mounds into what I suppose looked vaguely like mountains.

I added the two beady eyes and then gobbled up a few of the leftover very large “sprinkles.”

I stuck the baking pan in the freezer, set the timer for 10 minutes, and preheated the oven to 325 degrees.

When the 10 minutes were up, I pulled my little haystacks out of the freezer and placed them directly into the oven. After the minimum baking time of 12 minutes was done, it was clear that they could use another three. They still looked a bit liquidy, and it was just a gut feeling. At the 15-minute mark, the cookies looked done. They were still soft toward the middle, but I figured that might be a good thing.

I transferred the cookies to a cooling rack and put the next round of six on the sheet and into the oven.

After letting the cookies cool as instructed, I chomped into my first one. And there were rainbows and unicorns and stars dancing in my kitchen as I made the sudden realization that the deep, rich cocoa taste was like that of my beloved Everest Base Camp Macaroon. I couldn’t believe it.

The haystack cookies are a bit softer and more moist than the macaroons were, and the coconut used in the macaroons is a bit more finely shredded, but man this was close.

The Chocolate & Coconut Haystack Cookies were so easy and really so good. And kinda cute. My hubby and I have enjoyed snacking on them throughout the week. If you love chocolate and coconut, these might need to be added to your must-bake list. They are the perfect thing to usher in a little bit of Halloween fun.

Whether your weekend will be filled with pint-sized ghosts and goblins or you’ll be savoring the quiet, cool breezes of fall, whatever you get up to, I hope that it’s a wonderful one. Thank you so much for reading!

Ps. If you’re new to Saturday Snacks, click here to get caught up on all of the merriment we’ve had so far.

Ready to whip up some chocolate and coconut deliciousness right in your own kitchen? The recipe is below:

Atop the foreboding Bald Mountain, evil lurks. Chernabog casts darkness over the village below, summoning fire and demons.

These chocolate haystack cookies evoke the darkness of Bald Mountain, with two red eyes in each one to create the illusion of the beast himself.