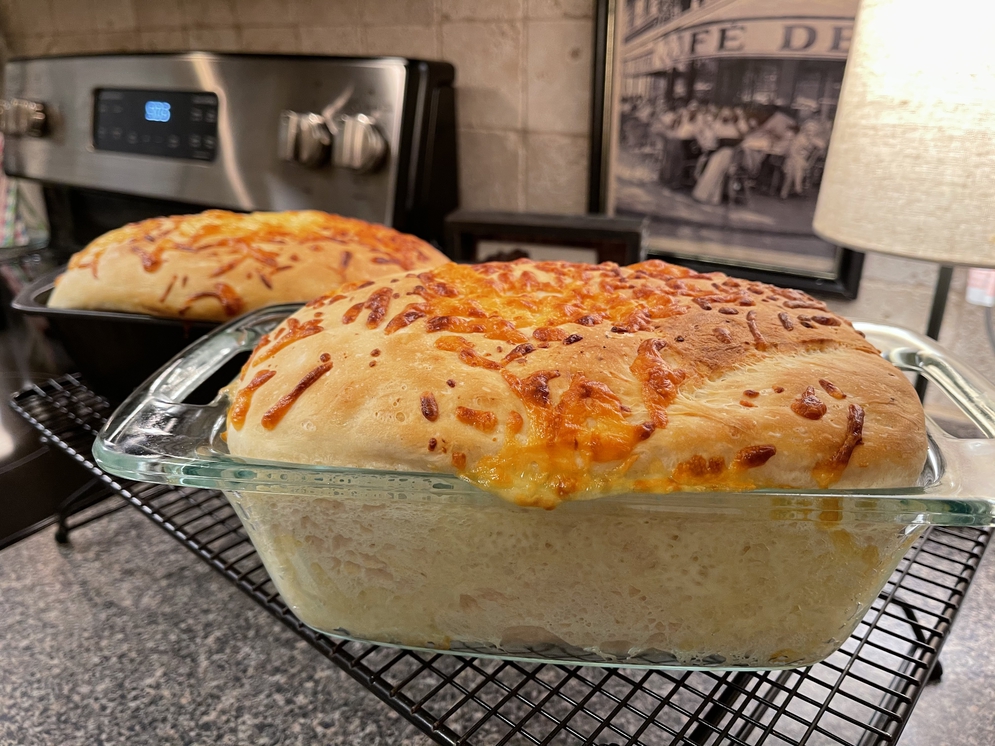 As an aside, if you love all things carbs, please go to Ale and Compass and order the Parker House rolls. They are light and fluffy and come with three amazing accompaniments. And then let me know what you thought. Ahem. Back to today’s recipe…

The recipe for Yacht Club Galley’s Cobblestone Cheese Bread can be found in two Disney cookbooks: Cooking with Mickey and the Chefs of Walt Disney World and Chef Mickey: Treasures from the Disney Vault & Delicious New Favorites.

The recipe has us using yet again another flour. It’s the first time that I’ve use bread flour for a Saturday Snacks recipe, and I was interested in finding out exactly what makes it different from good, old-fashioned all-purpose flour. Essentially, bread flour has a higher protein content, which creates a larger amount of gluten. You want gluten when you’re making bread because it produces a nice, chewy end result. The kneading of the dough that we’ll do halfway through the recipe will also help produce that much-needed gluten.

The first step in getting the recipe together is to grate two cups of cheddar cheese. We want a nice rough, course grate, so I opted to freshly shred an 8 ounce block of cheddar cheese using my Salad Shooter. Anyone else out there have a Salad Shooter? I’ve used mine for eons for just about everything. I had to replace the grating cone during the last year, but I figured it was worth it for freshly shredded cheese. Yum.

As I write this, I am standing in line to get back on a raft to get off of Tom Sawyer Island in the Magic Kingdom. It re-opened today (Friday, February 5th), and only three parties at a time are allowed on the raft due to physical distancing. I’ve been standing in this line for 30 minutes, which has allowed me to get some work done on this article… and which has allowed me to make the realization now that I go back over everything that I shredded the cheese when I made the bread yesterday rather than grating it. Great. Bear that in mind as we go forward. Even with this realization, I have to say that – spoiler alert – the grated versus shredded mixup did not alter my enjoyment of the end result. But, yes. Coarsely grate the cheese if you want to follow the recipe exactly. Double ahem.

Once the cheese has been grated or shredded or whatever, wrap the cheese and place it in the freezer for an hour. I wrapped mine tightly in plastic wrap and set the timer. A great thing to do right while you with for those 60 minutes to tick by is to take your 2 tablespoons of butter and pop it into the microwave until it melts. Take the butter out once it has melted, and allow it to cool.

After an hour, preheat the oven to 350° and take your cheese out of the freezer.

Into a medium saucepan, pour cup and a half of water and a half a cup of milk. Over medium-low heat, bring it up to between 100 and 115 degrees. If you don’t have a kitchen thermometer in your utensil drawer, this, basically, is just warm. Not hot, but nice and warm.

Into the bowl of a stand mixer (or your favorite large bowl using a hand mixer), pour 5 cups of bread flour, 1/4 cup of granulated sugar, your two tablespoons of butter or margarine that has been melted and is now cool, one tablespoon of salt, and two packets of active dry yeast. I was nervous about putting the dry yeast in the bowl without blooming or proofing it first as you normally would, but after checking and rechecking the recipe and the internet, I decided to go ahead and trust the recipe. Into the bowl the yeast went.

I poured the warm milk mixture into the bowl (using the dough hook attachment if you have one available), and allowed it to mix on medium speed for 5 to 6 minutes.

After 5 minutes, I grabbed the cheese and tossed 1 1/2 cups into the bowl of my mixer, and started the mixer back up. I kept it going until the cheese was completely incorporated.

After everything was mixed in, I pulled the dough off of the paddle attachment (my dough hook has decided to have a good life elsewhere…sigh), sprinkled a bit of flour on the counter, and placed the dough on top. I gave two 8 1/2-inch by 4 1/2-inch loaf pans a light spray with spray oil, and divided the dough into two equal parts.

I next lightly kneaded the dough until it reached a smooth consistency. It only took me a minute or two to get my dough looking nice and smooth, and once things reach that point, I shaped each half into a loaf and placed one in each prepared pan.

I sprinkled the last 1/2 cup of cheese on top of the loaves.

We’re now to set the pans in a warm spot, cover them with a towel, and walk away for an hour while they rise. Technically, the recipe says that we should let the dough rise for an hour or until it doubles in size. In my case, the way the timing worked out, I reached this point 45 minutes before my hubby and I needed to head to dinner. So I covered up the loaves with my Ratatouille kitchen towel and wished them Godspeed and good luck. Those loaves would be rising for much longer than one hour, and I was just hoping they wouldn’t be all over the place by the time that we got back home.

Thankfully, two hours and fifteen minutes or so later, the loaves had not taken over the kitchen (I was picturing The Blob). They had definitely doubled in size, but they looked good, so I preheated the oven to 350 degrees and placed them gently into the oven.

We’re supposed to give the loaves 25 to 30 minutes in the oven, or until they’re golden brown, but I set my timer for 20 minutes to be able to check and see if they were done. While I waited, the most heavenly, cheesy scent filled my kitchen. Bread and cheese, we here at Saturday Snacks love you. Soooo much.

When my timer went off, I peeked into the oven, and lo and behold, the loaves were golden brown. And the most lovely, cheese-covered loaves of bread emerged from the oven. I placed them on a rack to cool like the recipe asks, but of course, I wasn’t letting that fresh bread get too cool; I had to give them a try.

When I sliced into the bread, I thought at first that the loaves weren’t fully baked. I popped them back into the over for an additional five minutes just in case. After the extra five minutes, the bread looked the same and, of course, the light bulb went off that the cheddar cheese was making the bread appear undone. That glorious cheese was mixed throughout the bread, but at some points, the cheese had settled near the bottom of the loaf. I think that’s mostly due to my cheese being shredded rather than grated. Next time, I’ll grate it and see if things get dispersed more evenly.

Nonetheless, this bread is incredibly good. The cheese on top lends added flavor and texture, and the bread itself is soft and has heft and weight to it without being dense.

My hubby and I enjoyed a slice with the chicken parm he made the next evening, and the bread was the perfect accompaniment. It had lost none of its flavor, and was just as delightful those 24 hours later.

When the Cobblestone Cheese Bread was served at Yacht Club Galley, it was paired with a vegetable cream cheese. I slathered some butter onto one of my slices, and it was great. That being said, a slice of this bread all on its own is simply perfect.

All in all, this was an easy recipe. Yes, it calls for you and I to be patient as the dough rises and the cheese freezes, but, for the most part, it requires us to do very little in order to get delicious results. And, in my book, that’s the key to a recipe that I’ll make again.

Looking ahead, next Saturday is Saturday Snack’s first birthday, and we’re gonna celebrate with a snack fit for the big day. We’ve been on this Disney snack journey for a whole entire year (crazy to think about!), and I think that a snack fit for a party is called for. I can’t wait to commemorate the day with you.

Whatever you’re celebrating this weekend (a new book to read, a great FaceTime conversation, a shower), I hope that it’s a good one. May you and I savor the little things that spark joy and magic, and may we eat something yummy while we’re at it. Thank you for reading, friends.

Ready to be a bread baker? You can do it! The gloriously cheesy recipe is below: