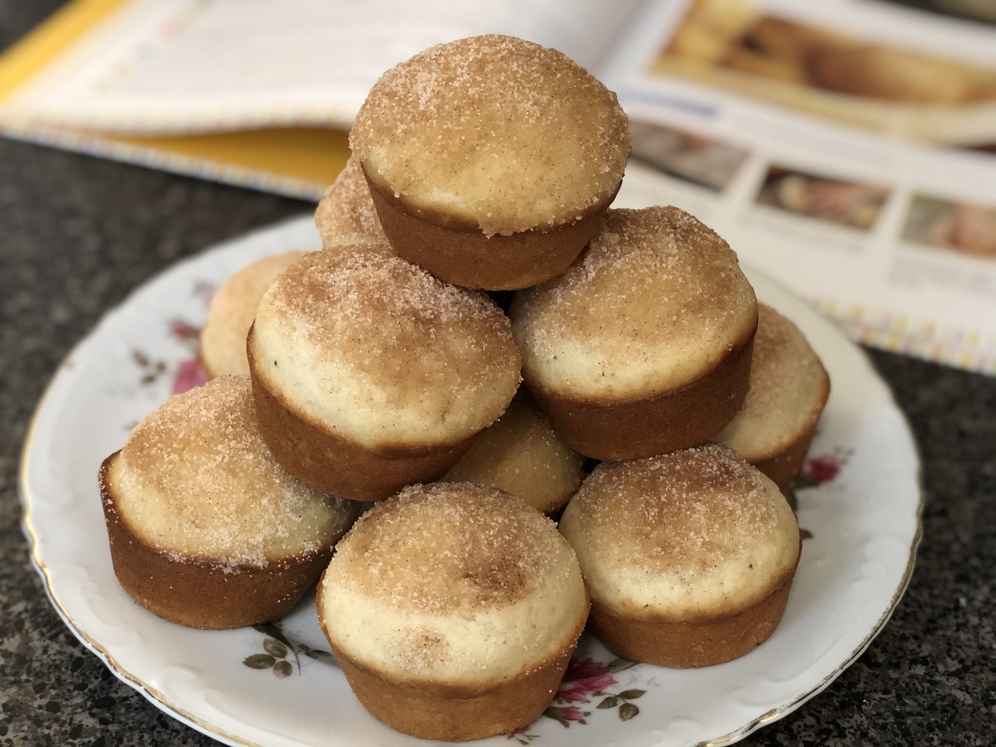 Good morning, friends! I hope that your week was good one. You’ve made it to Saturday, which means you deserve a snack. And while most of our Saturday Snacks might be something you’d typically munch on later in the day, today’s snack reminds us that breakfast deserves some snack love, too.

My very first attempt at making a Disney snack for the Saturday Snacks series came courtesy of a Ratatouille-inspired cookbook that I purchased at Writer’s Stop in Disney’s Hollywood Studios back in 2012. Can we all just have a silent moment of gratefulness for the magical haven that was Writer’s Stop? Sigh.

We’ll be digging back into that trusty cookbook for today’s snack, and it’s a little something that can be thrown together while the coffee’s brewing. As I perused the list of the recipe’s required ingredients, I became more and more excited as I read each item. One by one, I realized that these were items that I already had on hand. French Breakfast Muffins for the win! The only possible rogue item was nutmeg, but, after scrambling upstairs and opening the cabinet door with bated breath, I was met with an almost new bottle of the fall season favorite. Whew.

This recipe is perfect for fall. PERFECT. It’s got the flavors of fall, nutmeg and cinnamon, it goes together quickly, and, when it’s done, you’re left with warm, sugar and cinnamon-encrusted muffins. What’s better on a fall morning than that?

Alright, here we go. As I said, the ingredient list is mercifully filled with things we might have currently in our kitchens. We need short and easy ingredient lists when we’re whipping something up for breakfast with one eye open, right?

Our very first step is to grab a little bit of extra butter and rub it into the muffin cups of a 12-muffin pan. Get ’em nice and buttery and those muffins will pop right out of the pan. Also, this is the time to make sure that one of the racks in your oven is in the center, and preheat your oven to 375 degrees. You can also go ahead and melt the required 8 tablespoons (divided into 6 and 2) of butter. You’ll need the melted butter to cool down a bit before you use it.

Pull a large bowl out of the cabinet and toss in 2 cups of flour, 2/3 cup of sugar, 2 1/2 teaspoons of baking powder, and half a teaspoon of salt.

That little bit of spice will flavor the entire batch of muffins and will have you looking for more things in which to sprinkle just a bit of nutmeg. It’s magical stuff.

In a separate bowl, whisk one egg until it’s bubbly and frothy.

Give everything a stir to ensure that it’s combined, and set it off to the side for just a minute.

Grab the bowl of dry ingredients and a spoon and make a well in the middle of the bowl. Don’t stress if the dry ingredients don’t want to cooperate with you; we just want to create a landing spot for the wet ingredients, and any little spot will do.

Pour your wet ingredients into the bowl with the dry ingredients. Don’t despair when the wet ingredients overrun the banks of the well you made; it’s all going to get combined in just a minute. No worries.

Give everything a stir, making sure that all ingredients are incorporated. Once the batter is looking good, we can grab that greased muffin pan.

I pulled a measuring cup out of the drawer to help me scoop the batter into the muffin pan without dripping it everywhere. Grab whatever tool will help you most, and fill those cups two-thirds full.

After at least ten sips of something caffeinated, pull a bowl out of the cabinet and toss in half cup of sugar and half a teaspoon of cinnamon.

Give the sugar and cinnamon a good stir to make sure that it’s completely mixed. You’ll also need that extra 2 tablespoons of slightly cooled and melted butter in just a bit. Keep the butter in a separate bowl.

After 20 minutes, carefully pull your muffins out of the oven. And just gaze at how perfectly perfect they are. Light golden brown, and so delicate. And, while you think they look good now, rest assured that they’ll be looking even better in just minutes. Let the pan rest on a rack to cool for 5 minutes.

After 5 minutes or so, lift the muffins out of the pan and let them continue to cool just slightly on the rack. We’ll be making magic with them in just a minute.

Set up a little topping station for your muffins; it’s time to take these muffins up a BIG notch.

Take a muffin and dip the top into the bowl of melted butter. Don’t let it linger too long in the butter; a quick dip will do.

Your next step is to roll the buttered muffin top in the cinnamon-sugar mixture.

Yes, friends. This is joy right here. The cinnamon-sugar will grab hold of the butter that you dipped the muffin in and will leave you gazing in wonder at what you’ve created.

Keep on dipping and rolling until you have a dozen warm, sugary muffins just waiting to be devoured.

These are as good as they look. I promise. The muffins are light and airy, and, as others on the interwebs have called them, they’re a cross between a muffin and a doughnut.

The nutmeg is flecked throughout the muffins, and the combination of the nutmeg and cinnamon is just delightful. The outside of the muffin is a deep golden brown, the inside is soft, and the flavor is balanced and not overly sweet.

When my kids were younger, our breakfast tradition involved chocolate chip pancakes. Give them a couple of freshly-made pancakes studded with melty chocolate chips, and they were happy campers as they headed out the door to school. In retrospect, at this juncture, I’d like to issue a formal apology to the ever-patient people who taught my kiddos. I’m sure that they were a delight to behold when that chocolate kicked in. Ahem. These muffins could easily become a new breakfast tradition. Or a new tea time tradition. Or a new any-time-of-the-day-when-the-feeling-hits tradition.

What are your breakfast traditions? If you make the French Breakfast Muffins, please let me know below what you think. Have a great weekend, everyone!

Ready to bake up these amazing little muffins? The recipe is below: