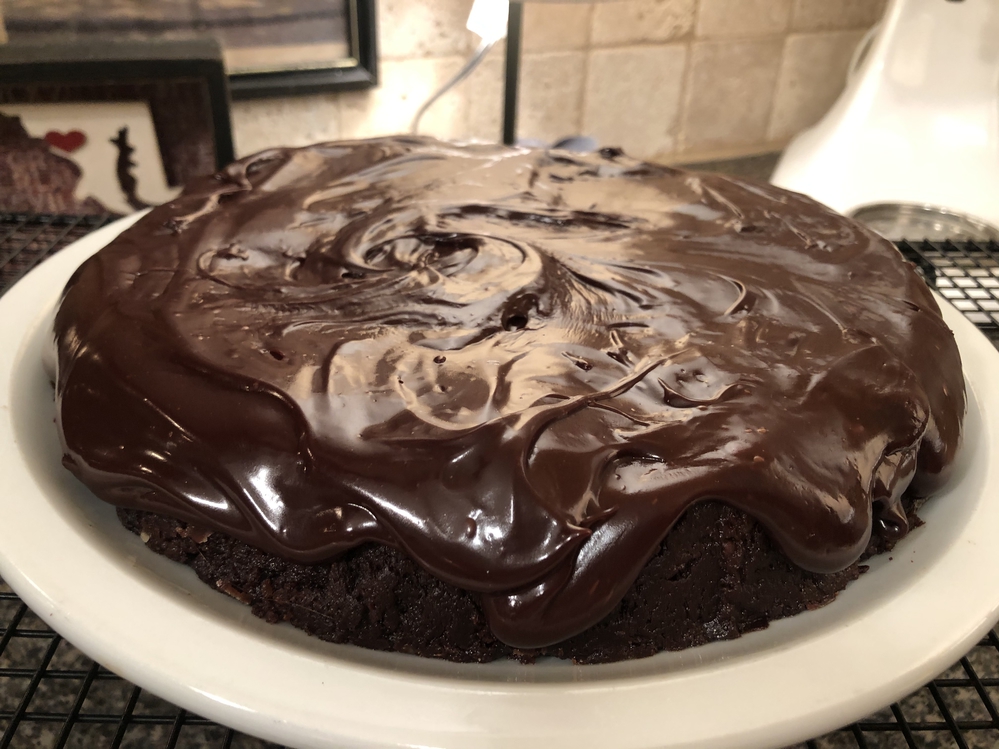 We all have our favorite go-to desserts that we make when asked, right? For years, my go-to dessert of choice for a potluck or special family dinner or Christmas party was Barefoot Contessa’s Chocolate Ganache Cake. Ina Garten can do no wrong, and her ganache cake recipe is no different. It’s a winner every single time. And it’s a pretty easy recipe for such a big payoff. Win-win!

Seven years ago, Disney Parks Blog released the recipe for California Grill‘s Chocolate Pudding Cake. While the Chocolate Pudding Cake is no longer on the menu, I figured that you and I needed to make it. Anything with “chocolate,” “pudding,” or “cake” in the title is right up our alley. Plus, wouldn’t it be great if we discovered a new go-to recipe? And who doesn’t love a rich flourless chocolate cake?!

First things first: let’s preheat the oven to 350 degrees and place 2 sticks of butter on the counter to allow them to come up to room temperature. You’ll also need to give your bars of bittersweet chocolate a rough chop.

For me, that translates to “smash the bars on the counter a bit and try to break them up and then, when all else fails, take a big knife to them.” Here at Saturday Snacks, we’ll do whatever it takes. And, since we’ve had such great results with Ghirardelli chocolate recently, I’ll be turning back to them for today’s recipe. They won’t steer us wrong.

Next, you’ll want to grab a 9-inch round cake pan from the cabinet. Give it a coating of spray oil, and then drop in a bit of flour and roll the flour around the pan, coating it completely. My advice is to perform this step over the sink. Always.

We’ll next need to grab a pot and add 1/3 cup of sugar to a 1/2 cup of water and bring it to a boil, and after cooking the mixture for 2 minutes, take the pot off of the heat. While the pot is off the heat, stir in the roughly chopped bittersweet chocolate, a bit at a time.

At this point, you’ll want to cut your room temp butter into small pieces. Once the chocolate has fully melted in the pot, you can slowly add in the 2 sticks of room temperature butter and stir it until it’s completely melted.

In a separate bowl (or the bowl of a stand mixer), combine the remaining 1/3 cup of sugar and the 5 eggs.

Like we’ve done in weeks past, we’re going to want to beat the eggs and sugar at a medium speed until we see a lighter color and frothy appearance.

Now for the magic: it’s time to slowly add the chocolate mixture into the sugar and water mixture. The recipe calls for us to “stream” the chocolate in. Stir until a smooth and shiny texture appears.

Pour the batter into the floured cake pan, and place the round cake pan into a larger roasting pan. Like we did with the chocolate soufflés a couple of months ago, we’ll need to add hot water to the large roasting pan to reach about halfway up the side of the cake pan.

The pans now go very gently into the oven, and the cake bakes for 28 or so minutes, or until just firm. Once they’re ready, pull the pans out of the oven, and place the cake pan on a cooling rack for 30 minutes. Be patient. Since we’re dealing with a cake, I was very patient. I actually waited the entire 30 minutes. Shocking, I know.

After 30 minutes have passed, we’re supposed to place a plate upside down on the cake pan, and to flip the whole thing very, very gently over so that the cake releases from the pan. Oh, that it were so simple…

This is the point at which my relationship with what was supposed to become a new go-to favorite dessert for all the events changed. It changed dramatically. I wish it wasn’t true, but alas, it is.

The cake decided not to come out of the pan. So I waited. And waited. And then PART OF IT came out of the pan, and part did not. And it became very obvious that the cake wasn’t completely cooked through, even though I had followed the directions. It was way too puddingy. So, I pieced the cake back together in the cake pan and threw it back into the oven. Without the larger roasting pan. I was not happy with my Frankenstein cake. Sigh.

I gave the cake an additional 15 minutes in the 350° oven in hopes that it would allow the cake to become more firm without completely losing the pudding-like texture. It came out of the oven after the 15 extra minutes, and I let it cool on the rack. And then I attempted to flip the cake again, and, instead of releasing from the pan as a whole, it decided to release in somewhat larger chunks than before. Again, the Frankenstein theme continued as I tried to piece it back together on a plate. There might have been a few expletives uttered at this point.

When using chocolate chips to make a ganache, keep in mind that the stabilizers used in making the chips will work against you. I said a little prayer, and used a lot of elbow grease, and the ganache turned out perfectly.

My favorite way to use ganache is to add it to the top of a cake in large spoonfuls and push the ganache over the side of the cake here and there. With the ganache covering the cake, you would never know that the cake underneath was pieced together like those Play-Doh masterpieces you and I used to make in preschool.

When it came to cutting a piece of the cake and lifting it off of the plate for a picture, I failed. The cake did not want to cooperate. And I wanted to throw it across the kitchen. My husband came to the rescue, however, and successfully plated a slice so that pictures could be taken. Bless his heart.

In retrospect, when this dessert was served at California Grill, it was offered in individual servings (see picture above), and not as a 9-inch cake. When Disney modified the original recipe for at-home use, I think that the vessel in which the cake would be baked wasn’t fully taken into account. I’m thinking that this cake would turn out wonderfully if baked in ramekins, similar to Palo’s soufflés. Doing so would likely preserve the pudding-like texture (something a soufflé doesn’t have), and would ensure that the cake was fully baked.

All in all, the end result was yummy and rich. It’s an extremely moist (my apologies to Ryno for the word choice) cake, and has a decidedly different texture than a soufflé or standard chocolate cake. It’ll satisfy any chocolate craving you’ve got, but, if I make it again, I’ll likely opt to scoop it straight from the pan and forgo trying to turn it out onto a plate.

What Disney-inspired treats are you whipping up in your kitchen these days? Please share below! Happy Saturday, friends!

Ready to give the pudding cake a shot? The recipe is below.