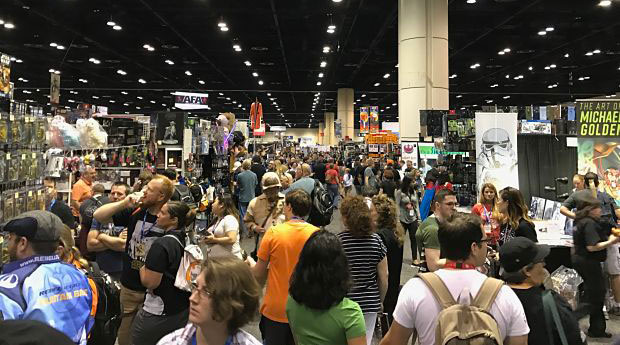 The Star Wars Celebration in Orlando, Florida started on April 13th, 2017. I attended the first day of the event, and this was the first “nerd” convention that I had ever attended, so I wanted to share with you my thoughts.

This event was run poorly, and I’m not really sure who to blame. Is it the fault of the Orange County Convention Center, Disney, someone else? The staff of the event were simply mismanaged and misinformed, and made the event feel more like a free-for-all. I can only remember seeing a handful of people that actually worked as staff for the event, and the few that Ryno Clavin and I did talk to were extremely curt, they treated us like we weren’t worth their time. For example, waiting to enter the expo Ryno politely asked, “When do the doors for the expo open?” With a weird smirk the guy working at the event responded with, “Soon, but there isn’t going to be a bum rush, or anything.” Confused and frustrated Ryno and I just walked away.

The security line waiting to get into the building was a joke. First off, there was a massively long line stretched outside the door, and around the block. People, including myself, waited patiently in line; waiting for the doors for the event to open. Sadly, as soon as the doors did open people were entering that didn’t wait in line, and no one running the event stopped them, or even seem to care. The bag check comprised of a woman running up and down the line yelling at everyone to open their bags, and then she proceed to run by and barely look inside. When we reached the metal detectors another person checked our bags again, but the whole process seemed extremely thrown together, like it was the first time many of these employees ever conducted the security operations at this location.

Overall, I don’t see how worse this event could have been run. With that being said, the actual content of the expo was amazing. Once inside the expo I realized how massive this event truly was. It seemed as if the showroom stretched on, and on, and on. Booths upon booths. I can imagine that this event for the nerdiest of Star Wars fans is like heaven. Even for a casual fan such as myself, I was impressed with the scope. Cosplayers were walking around everywhere, cool prop recreations were throughout the expo, and the environment was simply electric. There was so much new and retro merchandise, Legos, comic books, exclusive event merchandise, and even multiple stations for people attending the event to get Star Wars tattoos! I was surprised to see that the convention booths sold more than just Star Wars merchandise. There was superhero merchandise, Disney character merchandise, Power Rangers merchandise, and so much more. That was something that surprised me. With all this merchandise I really thought there was going to be something that would catch my eye, but disappointingly I walked away with nothing. In my personal opinion, it was either overpriced, not my style, or had too long of a line to wait to purchase it. This is atypical of the rest of the convention, as some people had massive bags that were stocked with merchandise. While I enjoy the Star Wars franchise, I can confidently say that I don’t love it the same way that many attending this convention did. This was for the hardcore fans that I don’t necessarily categorize myself in. Those hardcore fans were probably able to overlook how badly this event was run on its first day, but for the average person it was blatant to see how much better this could have been run. Maybe I am spoiled in expecting the level of service and execution pulled off by Disney Cast Members in the parks every single day.