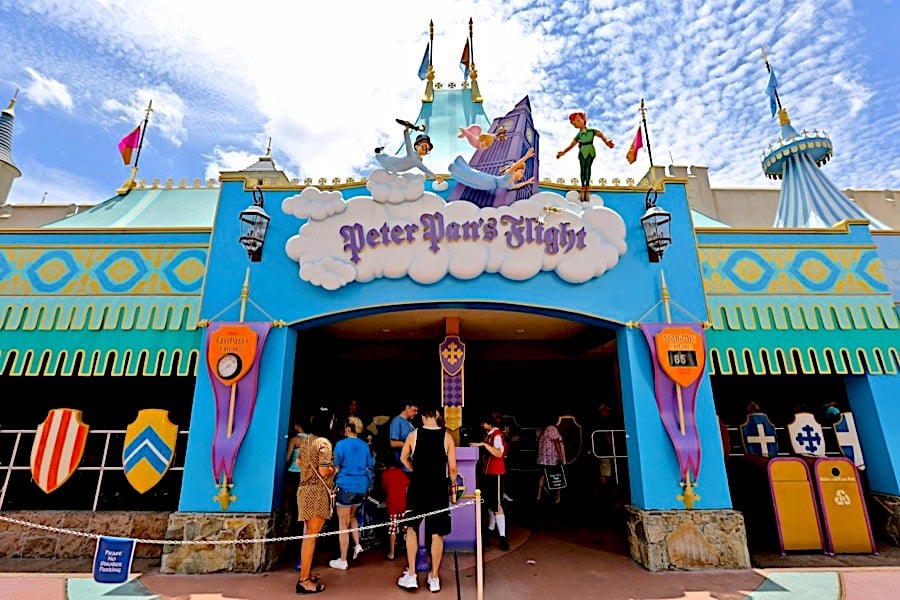 It’s the last week of the month, meaning it’s time to glance back to discover the origins of another Disney attraction we all know and love. I’m super excited as this week I have been delving into one of the classics near and dear to my heart. Let’s take a trip to Neverland together and learn more about Peter Pan’s Flight.

A Disneyland attraction from its opening year in 1955, Peter Pan’s Flight was modeled on the movie Peter Pan released only two years earlier in 1953. The first instance of this ride followed a similar theme as the one we know today though to a much smaller size. It was one of the first dark rides to utilize the newly implemented black light technology, famously used to illuminate the London night scene.

The ride featured simple audio and animated figures. However, the main characters, such as Wendy, the Lost Boys, and even Peter Pan, didn’t appear in the original version. Can you imagine this ride without a triumphant Pan at the ship’s helm towards the end?
Unthinkable.

Much the same as it is now, the ride vehicle took guests through the Darling Nursery, then on to the skies above London town before on to Neverland, finishing at Skull Rock. The idea was for people to feel as though they were soaring through the skies. However, the concept was confusing for guests, who were also put off by the lack of Peter Pan in the ride, so Disney started making notes for a new and improved version to open with the Walt Disney World Magic Kingdom park in 1971.

The second attempt at the attraction saw a more extended ride experience that now included Pan both in a sword fight with Captain Hook and, in the end, with the Darling children on the pirate ship. The re-opening was well received and inspired a redesign project for the Disneyland version.

Audio-animatronic versions of the characters were introduced into new, elongated scenes that used more detail and effects for an experience more immersive than ever before. The pirate ship deck scene from the Orlando ride was added to the Disneyland remake, and Disney decided to use galleons (large multi-deck sailing ships) suspended from the ceiling as its ride vehicle to encourage the feeling of flying.

The now famous line where Peter says, “Come on, everybody! Here we go!” was added along with landmarks around the black light London scene like Big Ben and Tower Bridge. All the characters were now represented in the more comprehensive experience, and guests felt a new sense of resolution by the end, where Peter and his friends have overthrown the menacing Captain Hook.

In 2014 and 2015, Magic Kingdom and Disneyland saw refurbishments to the Peter Pan’s Flight attraction. Upgrades to animatronics were implemented on the west coast, and new, detailed waiting areas where guests could queue inside among beautifully illustrated corridors to set the scene for the experience ahead were added to the east coast.

The ride’s undeniable popularity saw it recreated in Tokyo Disneyland in 1983 and overhauled in 2016, as well as Disneyland Paris and Shanghai Disneyland in China. It remains a fan favorite in all locations and is consistently considered one of the most popular rides for families.

One detail I have always loved about the Walt Disney World iteration is the appearance of Ariel from the Little Mermaid in the Mermaid Lagoon scene. She looks so adorable sitting there and adds an “easter egg” element to the attraction that Disney is famous for.

Thanks for joining me for the August installment of A Brief History of Disney. What are your first memories of this attraction? Do you prefer the new advancements or miss the original characters and design?