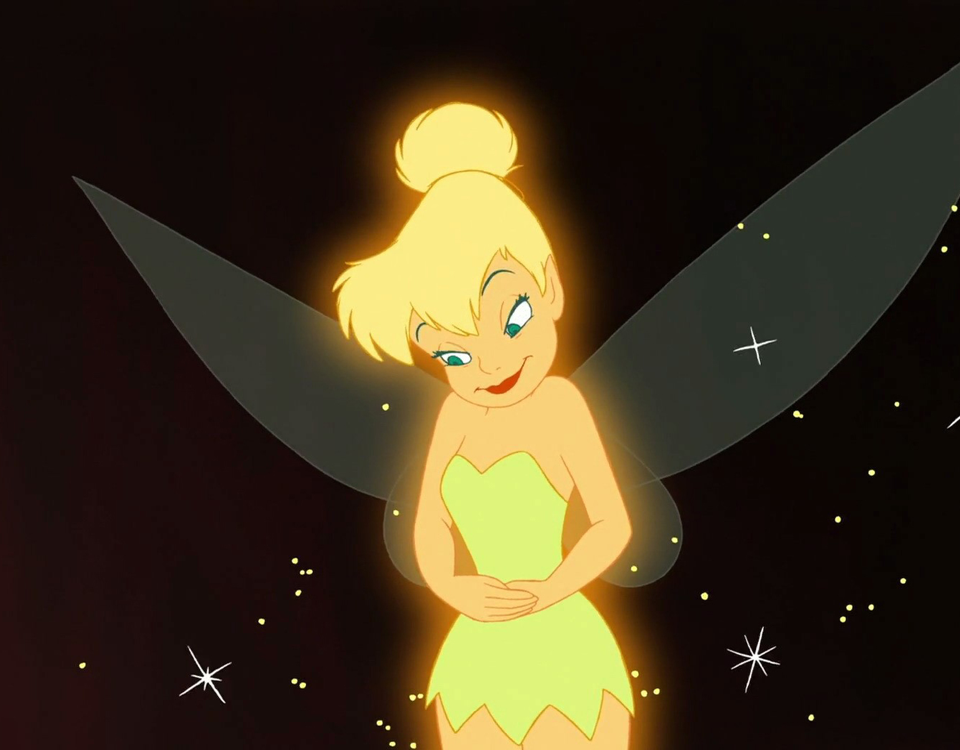 Is there anything more ‘Disney’ than Pixie Dust? A sprinkle of this mysterious powder is enough to bring magic and wonder to any situation. Tinker Bell, the provider of Pixie Dust, has flitted and fluttered across the World of Disney for over 60 years. Coming from the world of Peter Pan, Tink, as she is often known, has graced literature, the stage; and film from the klieg lights to Disney Animation and beyond. Tinker Bell has also become in many ways an important figurehead in the World of Disney, as well as a corporate logo.  But where did she come from, and why has Tink been such a flawless edition into this World?

One of history’s most popular children’s stories, that of Peter Pan, was written by Sir James Matthew Barrie (J.M. Barrie). Barrie was born in Scotland in 1860 and began a career as a Journalist and somewhat unsuccessful writer; often writing about life in Scotland. However, Barrie did find success writing for the theatre, with plays such as The Admirable Crichton and Quality Street.

This success eventually resulted in Barrie’s most enduring and beloved work, Peter Pan; or, the Boy Who Wouldn’t Grow Up; first performed on the stage in 1904 and novelized in 1911. The play and book tell the story many are familiar with, of the boy who does not want to grow up, and their adventures in Neverland with Fairies, Native Americans, Pirates, and more; in the company on the Darling children and his Lost Boys.

The role of Peter, which was often played by a woman, was first played by the Actress Nina Boucicault. The play involved many sets and provided a variety of technical challenges. Tinker Bell was shown in the form of a light, as a result of a mirror being reflected into a powerful lamp, and her ‘voice’ was represented with bells. The play was an unmitigated runaway success, with Barrie’s imagination and its originality subject to praise.

The origins of Pixie Dust are rather unfortunate, being added in later adaptions by Barrie. Initially, nothing was needed for Peter and the Lost Boys to fly, however as there were reports of children attempting to fly on their own; dust was added as a needed recipe to avoid further injuries.

The story was released in the form of a book in 1911 under the title of Peter and Wendy and has commonly been referred to and published as Peter Pan. In the novelization, Tinker Bell gives off a high degree of light, communicates through a lovely bell-like tinkling sound, wears a dress of skeleton leaves, and leans toward a plumper figure.

From the time of the stories initial performances on the stage and the 1953 Disney film, there were a variety of pantomimes, revivals, and films. One of the most prominent adaptions being a 1924 silent film. This is a film still available in high quality and contained some technical innovations of the time, including the inclusion of Tinker Bell as a woman. The role of Peter Pan was a contested one, highly desired by those such as Gloria Swanson and Mary Pickford.

One of the most beloved works of Classic Disney Animation, and the 14th full-length animated feature released by Disney, Peter Pan was released in 1953. The film was produced by Walt Disney and animated by the ‘Nine Old Men’ amongst a large cast of others. Many other Disney Legends, such as Ub Iwerks who was in charge of Special Processes, also worked on the film.

Taking place in the aught years of the twentieth century in London, the movie tells the story of the Darling family, with a focus on the children, Wendy, John, and Michael. To the consternation of Mr. Darling, the children are infatuated with the stories of Peter Pan and his entanglements with Pirates. Peter arrives with his friend, Tinker Bell, allowing the group to fly away to Neverland, in what is probably one of the most iconic scenes in Disney film.

Trouble begins almost immediately upon the group’s arrival in Neverland, in part due to Tinker Bells’ jealousy of Peter and Wendy’s relationship; and orders the Lost Boys to shoot Wendy down.

While Tinker Bell is banished as a result of her behavior, a variety of quirky misadventures and hijinks unfold with Pirates, Indians, and Mermaids. Captain Hook is able to determine the location of Peter’s lair through Tink; who redeems herself by rescuing Peter from a bomb plot. Peter Pan and Tinker Bell are then able to reunite in order to save the child from Captain Hook’s treachery. Tink is able to use her Pixie Dust to return the Darling children home.

The Tinker Bell of the film was designed by Marc Davis and was largely an original design. Actress Margaret Kerry served as a model for Tink, including interacting with a life-size key hole. She is slender with an hourglass shape, and fair skin, which will change color to reflect her mood. Her hair is blonde and kept in a bun, which or may or may not include a ribbon. A trademark green dress and translucent wings are also parts of her appearance.

Tink, similar to earlier adaptions, is shown as charming, but very quick to anger. While devoted and loyal to those such as Peter Pan, she is also quick to turn to jealousy and violent action. Tinker Bell is good at heart, even though there are many vicious facets of her personality just below the surface. Her most valuable quality is arguably Pixie Dust, which enables flight; which she produces with discretion, skill, and ease.

In season three of Once Upon a Time, she is played by Rose McIver. Tinker Bell, to the Blue Fairy’s dismay, befriends and tries to bring out Regina’s good side. In an attempt to help Regina, Tink is stripped of her wings by the Blue Fairy; and leaves the Enchanted Forest, heading to Neverland. As Mary Margaret and others find themselves in dire straits in Neverland, Regina is knocked out with Pixie Dust. Through various machinations, Tinker Bell is enlisted to help rescue Henry from Peter Pan in exchange for passage to Storybrooke.

Tink has had an important but subtle presence in Disney parks around the world. Peter Pan’s Flight, a wildly popular attraction in both Disneyland and Walt Disney World takes guests on a journey into the world of Peter Pan, enabled by Tinker Bell’s Pixie Dust. The Disneyland version also has the honor of being an opening day attraction, opening with the park itself. Tinker Bell also appears in Soarin’, above Epcot in Walt Disney World and above Disneyland in that park’s version. She has also been included in nighttime shows and parades, including World of Color.

While the precise schedule and place where guests meet characters changes often, Tinker Bell can be seen in various places including the Town Square Theater in Magic Kingdom, and in Pixie Hollow  in Disneyland.

Tinker Bell has long served as a sort of mascot for Disney. Never in any official capacity, she has graced television, including anthology series such as Walt Disney’s Wonderful World of Color and The Wonderful World of Disney. For those who may not have seen these series, we see her play this role in Saving Mr. Banks, in a clip where P.L. Travers sees Walt Disney on Walt Disney Presents levitate with her aid.

Tink could fit in the palm of your hand. Depicted on the stages of a glamorous and long-gone era as a ball of light, many, including Imagineers used their imaginations to give this fairy infinite purpose. Who amongst us hasn’t asked for some Pixie Dust during times of difficulty? This Fairy has brought magic to television shows, attractions, and nighttime shows in the World of Disney for much of its history. Tinker Bell is a sassy, temperamental, and powerful creature who will hopefully not go away anytime soon.