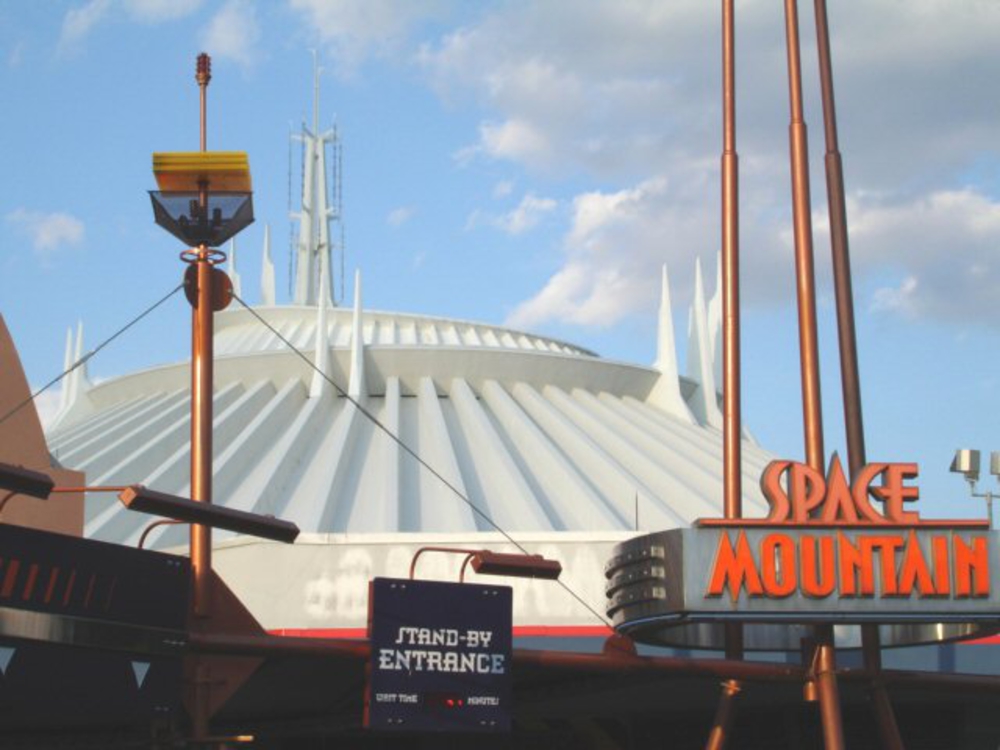 Walter Elias Disney always wanted to entertain people. He was a huge proponent of advancement, and helped create some incredible technological advances as far as animation goes. He helped create the first ever full-length animated feature film, for example! He was always looking at ways to innovate. His creation of Disneyland is the perfect illustration of this.

Disneyland wasn’t enough for him, though. In the later years of his life, Walt Disney purchased land in Florida with the intention of creating another theme park. This land purchase is what became Walt Disney World today. At the same time, after seeing the success of the Matterhorn Bobsleds, which opened in 1959 in Disneyland, Walt saw that there was a viable option to incorporate thrill rides into his theme parks. In the 60’s, Walt came up with the concept of a futuristic space travel thrill coaster. Unfortunately, technology hadn’t quite caught up to the idea that Walt had in mind. That was the first delay in the construction of Space Mountain. The second major delay was because of the tragic ending of Walt’s life in 1966. A lot was put on hold because of Walt’s passing, but putting it on hold didn’t mean it was the end. Walt’s image of the future would live on forever in his company.

The Magic Kingdom opened on October 1, 1971. When the gates opened, there wasn’t much open as far as attractions go, but new rides were already in the works. The concept and planning started for Space Mountain almost immediately. This ride became the first of the iconic mountains of Walt Disney World.

The total cost for this single ride was more than the entire construction of Disneyland, totaling just about $20 million. All of Disneyland was only about $17 million.

Space Mountain is a massive structure. It reaches a height of 65 feet and the ride dome has a diameter of 300 feet. It takes up a massive amount of space. The track length is 3,186 feet and reaches a max speed of 28 miles per hour. This is not by any means the fastest ride in Walt Disney World; however, it is in total darkness, so it feels much faster.

Space Mountain was originally designed with the goal of having four different ride vehicle tracks going simultaneously, but the technology wasn’t quite conceived yet. The Imagineers, led by John Hench, designed it with two different ride tracks: Alpha and Omega. Alpha’s track had to have an additional 10 feet of track to allow for the layout to fit properly. Each vehicle consists of two cars. Each car fits three guests, for a total of six guests per vehicle. Hench also created Space Mountain to be the first ever roller coaster completely controlled by a computer. This technological innovation allowed for the computer to use a unique braking system and scale to detect the position of the ride vehicles on the track and determine when to launch the next ride vehicle, as well as dictate the distance between each ride vehicle. The braking system used to measure distances is now standard on most roller coasters across the world.

The original music was composed by famed guitarist Dick Dale. The 2005 score for the ride in Disneyland was composed by Michael Giacchino, but the most recent renovation for the Walt Disney World version in 2009 brought about “Mount Bop” by Mike Brassell. The new score connects Disney World and Disneyland as Brassell’s music pay homage to Giacchino’s score by keeping a few of the same musical cues. 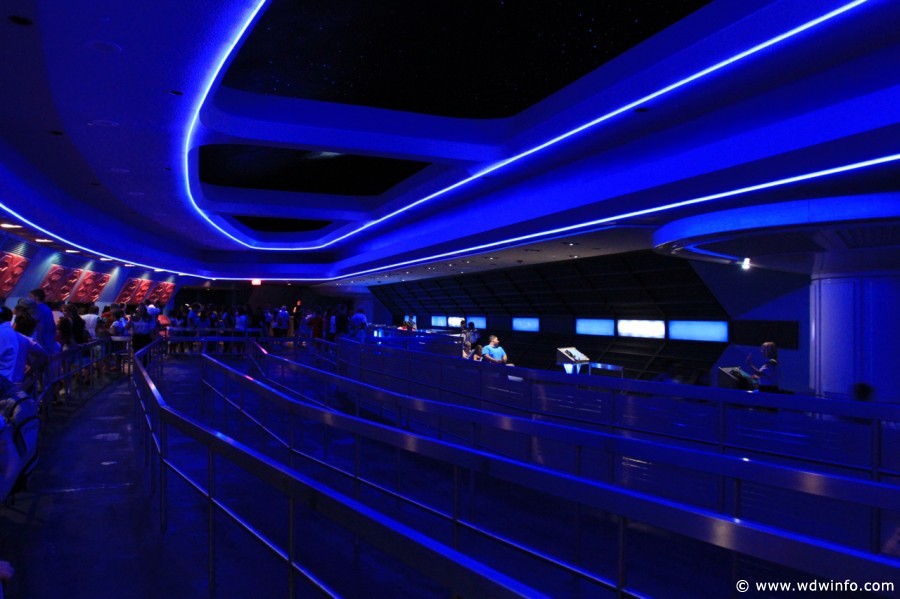 Space Mountain has some really cool little tidbits that pay homage to other things throughout the parks, and pay homage to some of the Imagineers as well. The first and most obvious would be that the Gateway to the Galaxies sign says, “Welcome to Starport 75.” This is a direct reference to the opening of Space Mountain which opened in 1975.

There are a number of these throughout the ride and queue. Among the small signs to the right of the Welcome to Starport 75 sign, you will see a small panel labeled “Active Lunar Stations” with the names of real star systems, real scientists, and real astronauts. The second category, “Active Earth Stations,” gives the location of all the other Space Mountain iterations at other Disney parks. They are: Tomorrowland Station MK-1 (the original), TL Space Station 77 (Disneyland), Discovery Landing Station – Paris (Disneyland Paris), Ashita Base – Tokyo (Tokyo Disneyland), and HK Spaceport E-TKT (Hong Kong Disneyland).

Further in the queue, there is a giant space map that features locations of real star names. Off to the right is something labeled Disney’s Hyperion Resort. This is not a joke about Space Mountain in Walt Disney World, instead, it is a tribute to the original Disney Brothers Studio located on Hyperion Street. Hyperion is also known as the book publishing division of the Walt Disney Company.

The exit of the ride has plenty of neat little pieces of history as well. As you are exiting to Tomorrowland, there are some pieces of intergalactic luggage. They have stickers for Space Station X-1, which is an old attraction in Disneyland’s Tomorrowland from the 50’s, and Mesa Verde, which is a fictional location from Horizons in Epcot. There is a sign on the exit that says, “Closed Sectors.” This sign references rides that have since closed and where the rides were located in Magic Kingdom. The list includes 20,000 Leagues Under the Sea formerly in Fantasyland, Mr. Toad’s Wild Ride in Fantasyland, Skyway to Fantasyland in Tomorrowland, Swan Boats on Main Street U.S.A., Mickey Mouse Review that was in Fantasyland, and Mission to Mars that was in Tomorrowland.

In a beautiful contrast, guests will see “Open Sectors,” a reference to newer rides such as The Many Adventures of Winnie the Pooh in Fantasyland, Magic Carpets of Aladdin in Adventureland, Mickey’s PhilharMagic in Fantasyland, Splash Mountain in Frontierland, Buzz Lightyear’s Space Ranger Spin in Tomorrowland, and lastly, Monsters, Inc. Laugh Floor in Tomorrowland.

There is a small sign later that reads “Traffic Codes” that directly references real roads in Florida, and most people who stay off property will be familiar with at least a few.

The ultimate easter egg is a tribute to the Imagineer that headed up the building of the ride: John Hench. The spaceship you see as you exit the ride has the letters “H-NCH (SM1975).” This acts as a calling card reference to John Hench, the Imagineer of Space Mountain that opened in 1975.

Space Mountain was an incredibly innovative roller coaster among coasters worldwide. It’s said that Disney had to wait for technology to catch up to the idea. That definitely shows with how ambitious the ride was for 1975. Though it is now the slowest thrill ride at Walt Disney World, the darkness makes it feel faster, and it remains a fan favorite today. Everyone seems to love Space Mountain. Ask any Disney fan and they can probably tell you the first time they ever rode the iconic ride.

Let me know in the comments section below your earliest memory of Space Mountain! I’m interested to hear what others think of the iconic first Walt Disney World mountain.