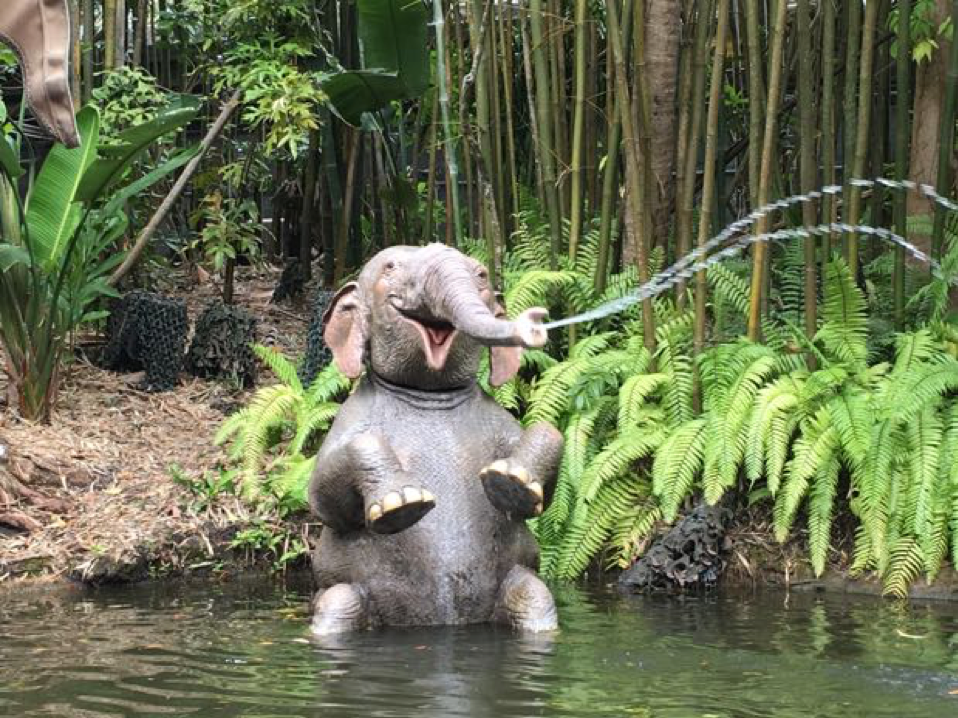 Many wonderful themes abound in the world of Disney, from the Grimm Fairy Tales to Alice in Wonderland, and Marvel Comics. Realms of fantasy and the possibilities of tomorrow are all used to create wonderful lands, resorts, and cruises. Old Hollywood, the world from which Disney emerged, is one which has been tastefully used by Imagineers across the globe.

What exactly Old Hollywood is can be debated, but it is generally the period from the 1910’s to 1950’s when studio moguls and stars ruled the world of movies. It was based primarily out of Los Angeles and its environs. Flashy MGM musicals, smoky film noir, news reels, and expedition films provided entertainment to millions of Americans. Walt Disney arrived in California in 1923 into the movie industry and into Los Angeles, which was really burgeoning as the behemoth it would shortly become. The Studio and animation emerged with ample competition, but managed to become a respected and beloved form of entertainment. At Walt Disney World, guests have many opportunities to connect with Old Hollywood.

So, where can Old Hollywood be seen at Walt Disney World? The most obvious is, of course, Hollywood Studios, which many, such as myself, will perpetually call MGM Studios. The theme of the park could be debated and seems ambiguous, a concern only exacerbated by the addition of Star Wars: Galaxy’s Edge. But Hollywood Boulevard and Sunset Boulevard tap into the architecture of the time period, with the Twilight Zone Tower of Terror serving as the current icon of the park. Several restaurants, such as the Sci-Fi Dine-In Theatre and The Hollywood Brown Derby are also available throughout the park.

Mickey & Minnie’s Runaway Railway takes guests through an adventure with Minnie and Mickey, and a marquee reminiscent of the past is displayed on the show building.

Several other places on property allow us to enjoy this age of refinement and opportunity. The Edison is a restaurant located in Disney Springs. It resides in an abandoned 1920’s power plant, with several different areas reminiscent of the 1920’s and 1930’s. A variety of really interesting American-themed food and cocktails is served. The menu is quite a varied one, with eclectic options like the DB ‘Clothesline Candied Bacon,’ and more traditional ones, like my favorite, the grilled cheese and tomato soup.  Especially relevant to Old Hollywood is a slideshow of black and white films played on the walls throughout the location. I know I have seen The Skeleton Dance (1929), a Walt Disney Productions Silly Symphony, and A Trip to the Moon (1902) as part of the slideshow.

While I do not have a complete list of the films projected at The Edison, the Patina Restaurant Group’s Marketing Director, Kyle Collins indicated in part that they are, “..representative of the 1920s/30s period of cinema when Hollywood solidified its standing as the premiere film factory for the world. In keeping with the industrial gothic age of innovation and imagination theme that truly encapsulates The Edison, these shorts showcase an invention that once left viewers breathless.”  Part of the hope of utilizing these films is to help guests take “…a step back in time to an era of old world charm.”

There are two other places where Old Hollywood has a commanding presence in Walt Disney World. One is the Jungle Cruise, located in Magic Kingdom’s Adventureland. This beloved attraction, located around the world, opened with Disneyland’s iteration. Imagineer Harper Goff was heavily influenced by the 1951 film, The African Queen. The film was directed by John Huston and stars Humphrey Bogart and Katharine Hepburn. Bogart plays the boozehound Charles Allnut and Hepburn the pious spinster Rose Sayer. The African Queen tells the story of the unlikely pair venturing through a World War I-era central Africa dodging leeches, rapids, and Germans. Uncommon for its time, it was filmed on location in Uganda and the Congo, leading to its lushness and authenticity.

The Jungle Cruise was initially a relatively serious attraction, with the goal of showcasing exotic cultures, flora, and fauna, designed to educate the public. Opening in 1955, it began to become stale by 1962 as it was the same serious script and guests found it had low repeatability. In 1962, legendary animator Marc Davis (i.e. Tinker Bell and Mr. Toad) was brought in by Walt Disney to try his hand at designing for Disneyland. Finding Disneyland lacking in humor, alterations were made to the Jungle Cruise, which overall has been a big hit with guests. Changes were made, initially adding sarcasm and humor that evolved into the puns and jokes many enjoy today. Additions included the iconic scene of elephants bathing. In particular, the inspiration for the boat vehicles were drawn from the film, and it was one of the first attractions not based on an animated Disney production.

A perhaps more surprising place to find Old Hollywood is Animal Kingdom Lodge. In the Lodge’s famous lobby, there is a room off to the side referred to as the Sunset Lounge. Outside of the lounge, there is also an animal overlook, where ostrich, in particular, care to congregate.

This is a wonderful lounge discreetly located off of the main lobby, right past the front desk area, which includes pictures from the famous safaris of Martin and Osa Johnson. In the era of classic Hollywood, going to the movies was often an all-day experience, which included cartoon shorts, new reels, and expedition films.

From 1910-1937, Martin and Osa Johnson were a husband and wife team who traveled all throughout Africa on many risky expeditions, filming and photographing the people who lived there. Their work was unique, as it was filmed entirely in Africa, as opposed to shooting some in the wild, and editing in older clips or shots from zoos.

These films helped serve as an inspiration in the design of Animal Kingdom Lodge. The Sunset Lounge exhibits a few dozen photographs of these expeditions and an original copy of Osa Johnson’s 1940 book I Married Adventure. The next time you decide to resort hop, spend your day at the resort, or enjoy dinner at Boma, remember to stop in this lounge and see the pictures and memorabilia from these brave adventures.

Hollywood of the past is present elsewhere at Disney parks and resorts, and more may be forthcoming. Disney California Adventure’s Hollywood Land is a tribute to this important time in Southern California’s history, with stores such as Gone Hollywood. Hong Kong Disneyland includes Disney’s Hollywood Hotel which invites guests to “Surround yourself in the glitz and grandeur of classic Hollywood at this richly appointed hotel.”  While I have not been to this resort, with the benefit of YouTube, one can get a look at what appears to be a well-themed, tasteful, relaxing hotel.

The world of Disney began in a bygone era of grit and glamour. Unlike some themes, such as the Muppets, this is not one which has been overlooked.  Hopefully, Imagineers will keep this era in mind as they continue to plan refurbishments and expansions around the world. Have you stayed at the Hollywood Hotel or find Hollywood Land especially enjoyable? What are your thoughts on this theme at Disney parks and resorts?

For sources, please see the links and the following books:

The Imagineering Field Guide to Disneyland