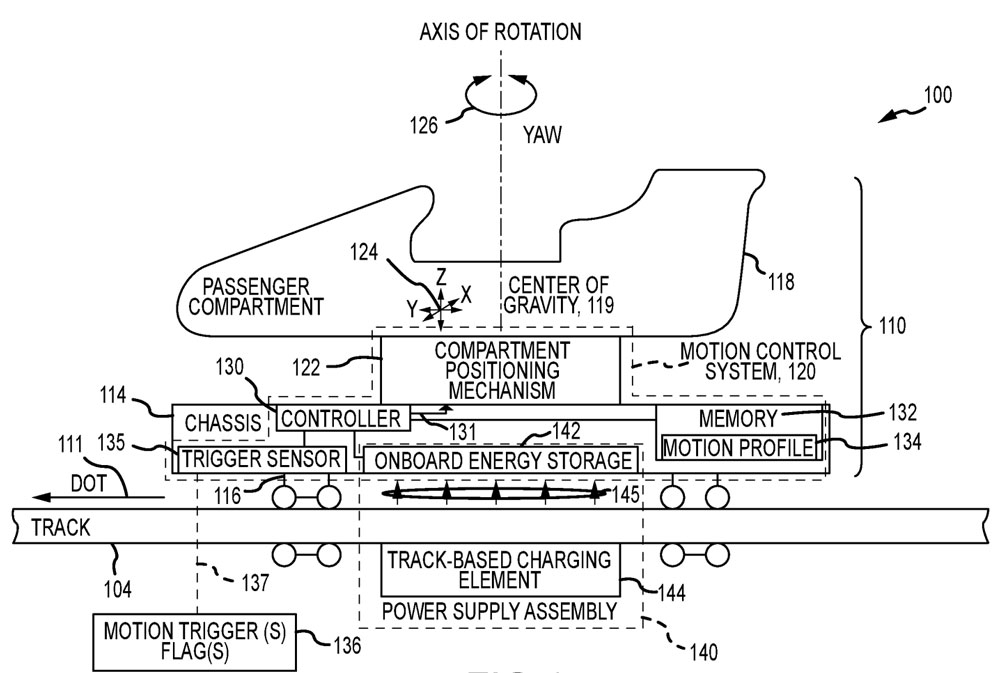 Walt Disney World or Disneyland Resort guests could have a more dynamic roller coaster experience in store during their future theme park vacations, as a recently published patent application shows designs for a new Disney system that would allow ride vehicles on gravity-based attractions to change their position during the course of the track.

While going through the traditional drops and loops of a fast coaster, passenger cars would face left or right to follow the natural track or give them better viewing opportunities for theming and displays that surround it.

While there is no shortage of Disney attractions with cars that swivel between different viewing positions, this aspect is usually found on slower rides due to charging issues. A fast-paced roller coaster with a ride vehicle that could change the guests’ vehicle direction as it follows a track would be a novel innovation for Disney Parks.

Not only would such a system add an exciting element to upcoming attractions, but it would also make it possible introduce new experiences to existing attractions rather than replacing them as they become stale. This mindset is becoming a trend with new Disney technology.

The patent application, titled “Roller Coaster with Passenger Compartment Motion Powered Through Stored Onboard Energy,” explains the desire for the design:

For example, it is much more desirable for a park operator to reuse an existing track and support structure than to remove these and build a completely new ride as this places a ride out of use for a longer period of time and, during construction, is more disruptive to nearby attractions. In some instances, a ride can be updated and modified by providing new show or visual features along the track that are visible not only as the vehicles travel in the DOT[direction of travel] but also on one or both sides of the track. In such cases, it is desirable to provide a programmable yaw profile that is followed to rotate the passenger compartment about its vertical axis to have the passengers face to the left or right as the vehicle travels along the track.

If this idea seems simple, you may be wondering why Disney hasn’t done it previously. The problem lies in the charging. For a vehicle to perform any extra functions beyond sticking to the track and letting gravity do its thing, some sort of power source is needed. In a slower or straighter ride system the vehicles have an opportunity to recharge using bus bars, a system of electrical conductors which distribute power.

These aren’t a perfect energy supply option on rides that move quickly and have a number of tight corners and turns. This is why on modern coasters that do have dynamic positioning, the ride vehicle doesn’t swivel left or right during many parts of the track — namely, the most exciting parts. The documents elaborates,

However, it is very difficult to provide bus bar systems that are effective in corners and other sections of the track such as very steep sections where the vehicle is traveling rapidly. Hence, existing designs would not be able to provide any motion of the passenger compartment in many sections of conventional roller coasters as each includes many corners and other sections where it is impractical to provide a bus bar system. Further, track access, maintenance costs and procedures, and vehicle speed cause a bus bar system to be undesirable or even infeasible to implement for a long gravity-based coaster-type experience or ride.

Disney’s solution would still use a bus bar charging system while the vehicle was in motion and add a track-based capacitor plate to charge during loading and unloading periods. These charging stations would be spaced apart from the points during the coaster when a directional change is desired, so the vehicle would get the much-desired power resupply while only using stored energy for the yaw movements.

By providing as many of these charging stations as possible, the ride vehicle will have power to swivel on its axis throughout the ride. The application states,

For example, there may be ten locations along the track where it is desirable to provide yaw or other motions to the passenger compartment, and one of the opportunity charging stations may be provided upstream of each of these ten locations. In other cases, though, each charge provided by one of the opportunity charging stations will be large enough to allow operations of the compartment positioning mechanism in two, three, or more of the locations on the track where motion is programmed in a motion profile or where motion is triggered such as by a flag/triggering element nearby the track. This system does reinforced the idea that Disney is focusing more on creating rides that can be re-themed and updated without changing their basic structure, thereby keeping their content fresh but limiting construction in the long term.