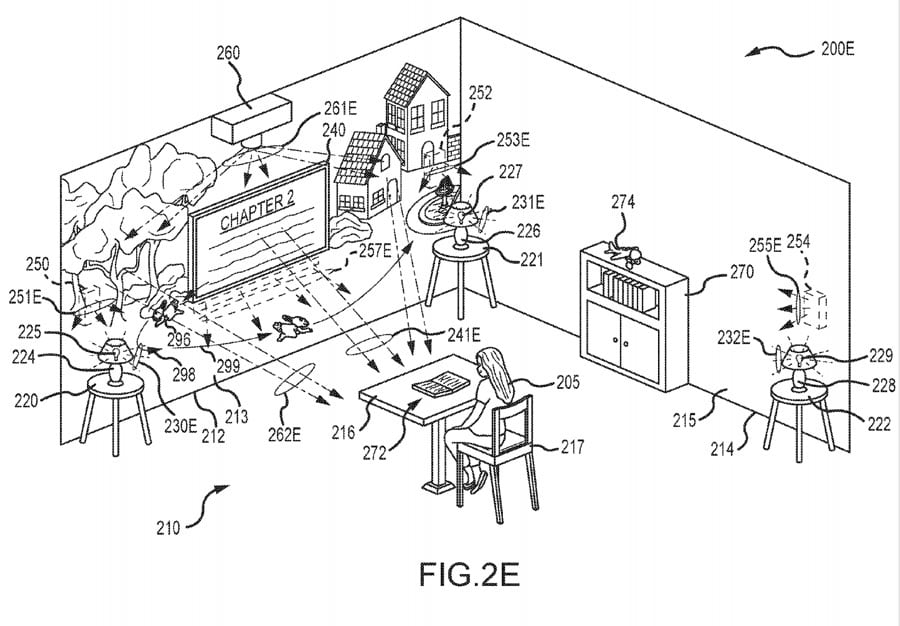 With a fully immersive Star Wars hotel on the horizon which promises to tie directly into the new Star Wars: Galaxy’s Edge land in Disney’s Hollywood Studios, Disney is certainly upping their hotel game. A patent posted today shows a new level of in-room storytelling and entertainment that we may end up seeing at Disney Resort hotels in the near future.

The patent, published by Disney Enterprises, Inc. and titled “Multimedia System for Transforming Any Room Into a Show Environment,” outlines a system in which any room can be converted into an immersive entertainment experience, with an emphasis on hotel rooms. In the relevant background the document states:

There are many settings where it is desirable to provide in-room entertainment to make people’s stay in that room or space more enjoyable. These spaces may range from waiting areas (e.g., airport and other transportation staging areas, health and other service waiting rooms, and so on) to hotel rooms to a room in someone’s home, and each of these spaces may be considered a “room” in this description. To date, the types of entertainment provided in these spaces or “in-room” has been quite limited. For example, hotel rooms have long been rather generic environments distinguished from each other mainly by their furnishings, decor, the hotel’s location, and out-of-room amenities provided in the hotel or its grounds. Conventional thinking in the hotel industry has been that it is desirable to make their guest very comfortable while they sleep but to otherwise encourage their guests to leave their room to partake in entertaining activities such as shopping and dining on-site or elsewhere in a resort or nearby city.

This last sentence is interesting, as one would imagine Disney would hold this traditional view, and want guests out of their rooms and in the parks spending money rather than enjoying in-room entertainment. With new resort options like the upcoming Star Wars hotel, however, Disney seems to be turning a hotel stay into an attraction all its own.

The patent goes on to explain a system for using a multitude of devices that will sync with a display monitor (the television is still the primary source for entertainment, after all) to create a rich storytelling environment.

The in-room show system generally includes a controller for selectively operating a display device (e.g., a television or the like), a video projector, an audio system (e.g., one or more speakers), and other show components (e.g., one or more lights (which may include black lights), a fan, a mechanical device (e.g., mechanical props), electrical devices (e.g., illusionary props), and so on). Media content is predefined for the room or is provided in real time to suit the room, and the controller operates … to serve the media content to tell a story and/or magically transform the space into a multidimensional and immersive entertainment space. With audio, lighting, fans, and even wall projectors, an entire room can be transformed to augment video being played on the display. That isn’t this system’s only application, though. Special environments can be set up that will add to other hotel experiences, such as creating immersive surroundings to better enjoy your room service meal, unique alarm settings for an exciting morning, bathroom wall projections that will encourage children to get cleaned up before their day at the parks, or even watching a nighttime fireworks spectacular from a room without an unobstructed view of them.

While the existence of a patent never guarantees actual real world application of the technology, this particular system seems to be directly in line with the new immersive outlook and emphasis on theming that Disney is taking with their upcoming hotel endeavors. While nothing is set in stone yet, it would not be surprising to see this technology become the norm for future Disney Resort hotel experiences.