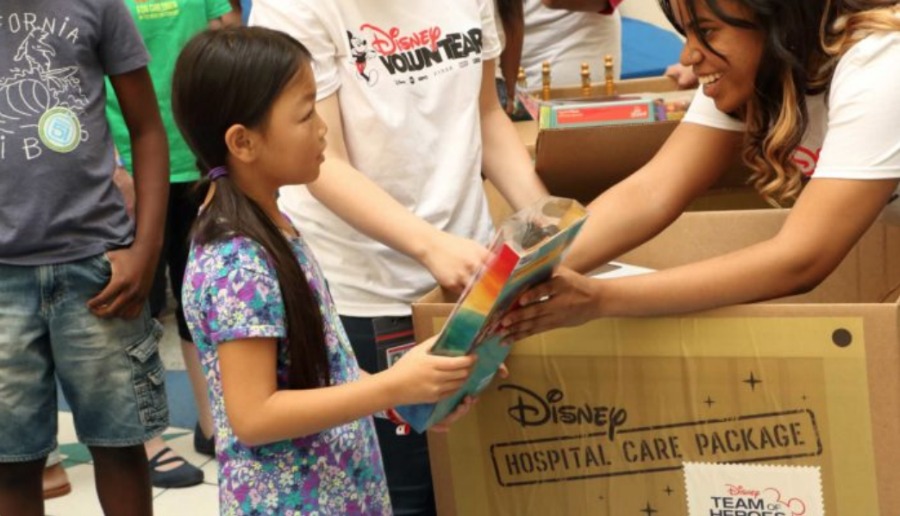 Back in March, we shared details on how The Walt Disney Company launched their ‘Team of Heroes‘ program and made a commitment to donate at least $100 million in resources to reinvent the experience families have when their child is in the hospital.

Disney has shown its dedication toward children’s hospitals dating back to its earliest days with the delivery of care packages being a tradition for almost 15 years. This tradition continues through the Team of Heroes program, and this year, the care packages will bring even more magic to young patients during their hospital stays.

“The Hospital Care Packages have been a critical part of the work we do for seriously ill children because they allow us to make the greatest impact by reaching children in 445 hospitals across the country. We are thrilled that, this year, we were able to double the value of each package received in order to deliver more opportunities to bring some comfort and joy during their stays in the hospital.”

Disney partners with the Association of Child Life Professionals (ACLP) in creating the care packages to thoughtfully choose products for kids ranging from toddlers to 18 years old that they feel will be the most effective in decreasing stress and encouraging play. The Starlight Children’s Foundation aids in the assembly and distribution of these special packages to over 445 children’s hospitals in the U.S. and Canada.

The broad assortment of products include items such as the “latest DVD releases from The Walt Disney Studios, popular toys from Disney store, top titles from Disney Publishing, and digital products such as downloadable apps, game codes, video games, music and other exclusive downloads and rewards memberships. They also contain one item that can’t be found anywhere else: a Marvel comic book that has been created in partnership with ACLP exclusively for the special care packages. A fifth version of the comic book is currently part of the product assortment and continues to be a unique and in-demand product at recipient children’s hospitals.”

These very special care packages have been designed in order to bring relief along with a sense of normalcy to children during a hospital visit. They represent one of the ways that the company leverages their cherished characters and stories while encouraging young patients and attempting to ease their stress of a hospital stay.

The Walt Disney Company has helped transform public spaces and play areas at children’s hospitals in the U.S. and in London in recent months as well. They partnered with Lucasfilm and Starlight Children’s Foundation to bring a special Star Wars experience to UCSF Benioff Children’s Hospital in San Francisco. They also brought Pixar animators, Mr. Incredible and Elastigirl to Children’s Hospital of Philadelphia for an “Incredible” day for patients and their families.