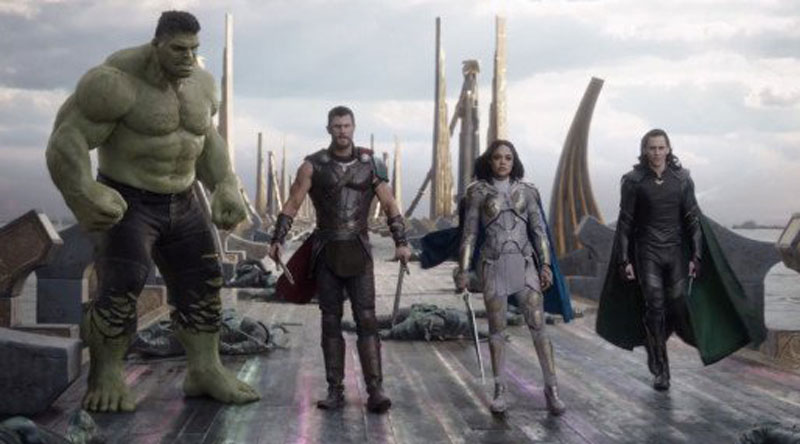 Chris Hemsworth, Mark Ruffalo, Tom Hiddleston, Cate Blanchett, and director Taika Waititi graced the stage to explain Ragnarok‘s new direction for the thunder god. Ragnarok is loosely based on Marvel Comics’ Planet Hulk storyline, in which the Hulk is forced to fight in a gladiatorial arena on the Planet Sakaar. This film puts Thor right there with him.

Hemsworth said of the new character direction, “I’ve played this character five times now … I got a bit bored with myself and wanted to make something different.”

Explaining his absence from Earth’s superheroic drama, the Odinson tells Hulk in the trailer, “I’m doing my own thing now, I’m not really hanging out with the Avengers anymore, it all got very corporate.”

While Thor is busy fighting for alien entertainment on another planet, Cate Blanchett’s Hela is taking over his home of Asgard, trying to bring about the end of the world, the titular Ragnarok. Thor must solve his problems abroad and marshal his forces to save his home.

The footage from Black Panther received a standing ovation from fans at the panel. Chadwick Boseman stars as T’challa, who runs double-duty as the new king of the technologically advance African Nation of Wakanda, and as Wakanda’s superhero, Black Panther.

Director Ryan Coogler explained the film’s take on the king, “T’Challa is someone who got his power from the people around him and his history. History is something very important to me, my family and African culture.”

Reuters described the exclusive footage Comic-Con guests were privy to:

Captain Marvel, the standalone superhero film starring Brie Larson, will evidently be set in the 1990s, prior to the original Iron Man and the events that created the Avengers. The film’s villains will be the alien shapeshifters known as Skrulls.

Lastly, Marvel announced some new cast members for Ant Man and the Wasp. It looks like Janet Van Dyne will be played by Michelle Pfeiffer and Lawrence Fishburne will play Dr. Bill Foster.