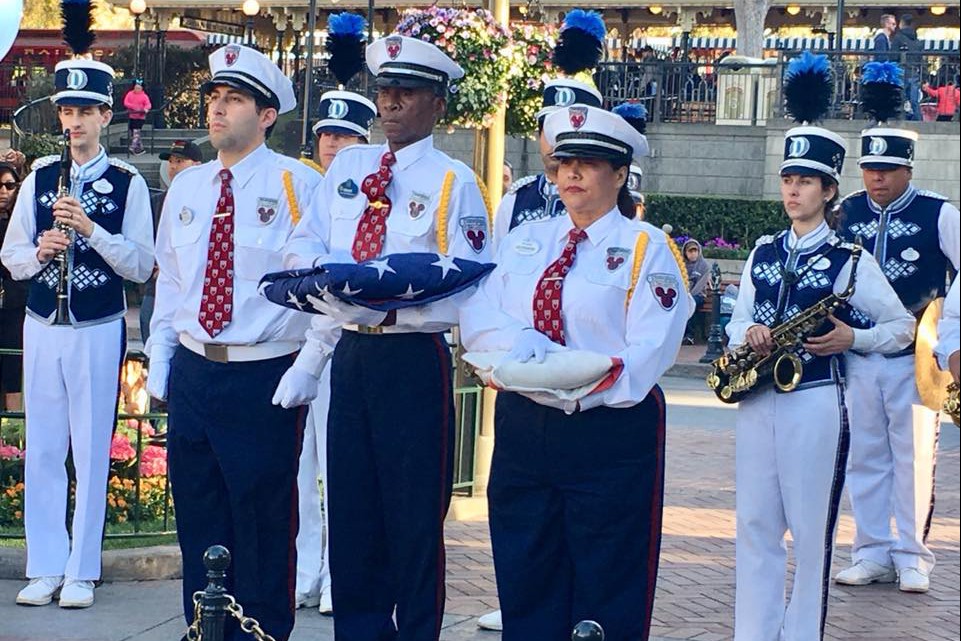 ShareTweetSubscribe
During each afternoon's Flag Retreat Ceremony at Disneyland Park, an honor guard of Disneyland security officers lowers the United States and California flags for the day in a patriotic ceremony where they're usually joined by the Disneyland Band and the Dapper Dans. As the band plays the anthem from each of the armed forces, veterans and active military are invited to the flag pole to be part of the ceremony. After the final anthem, the honor guard approaches the flag to lower the colors, but before they do a member of the honor guard, often former Marine Ernie "Gunny" Napper, speaks directly to the veterans and military personnel gathered around the flagpole and thanks them for their service. On Friday, the Flag Retreat returned to Disneyland after not being held for several weeks due to construction on Main Street USA, and fans were disappointed to hear that the personal remarks from the honor guard to those around the flagpole had been replaced by a recorded announcement.

"To all you have served our great nation, on behalf of the Disneyland Resort, we thank you for your honorable service to America."

"This Retreat was several months ago BUT I'm posting to remind us of the passion of a Man that served this Nation ALL of his adult life. Gunny served 22 Yrs. in The Marine Corps and has continued to serve here at The Park for going on 26 years. His HEART is to Honor and Thank. You can hear it in his voice and feel it in your soul. Today his voice was silenced and replaced with a 'canned announcement.'"

"[During] the playing of GOD BLESS AMERICA, Gunny always looks around the circle and makes eye contact with each Veteran...he broke down and shed many tears today. It was a tough day for this Marine."

Emslie encourages fans of the Flag Retreat Ceremony to let the Disneyland Resort know how they feel about the change. Some fans who have already contacted Disney received a response that reads, in part:

"We sincerely appreciate your passion for the Flag Retreat Ceremony that occurs daily in Disneyland on Main Street U.S.A.. Our entertainment offerings and attractions are continually evaluated in an effort to provide our Guests with the best possible experience. One of the ways we attempt to maintain this goal is to continually evaluate our operation and sometimes we make changes. For a more consistent Guest experience, and to ensure all Guests can hear the remarks at the Flag Retreat Ceremony, a new, pre-recorded message thanks those who have served."

A similar change was made in February of 2015, but after only a few days, the personal greeting returned. Source/Image: I Support the Disneyland Flag Retreat Ceremony
ShareTweetSubscribe
Save Up to 30% at Select Disney Resort Hotels this Spring through mid-Summer!