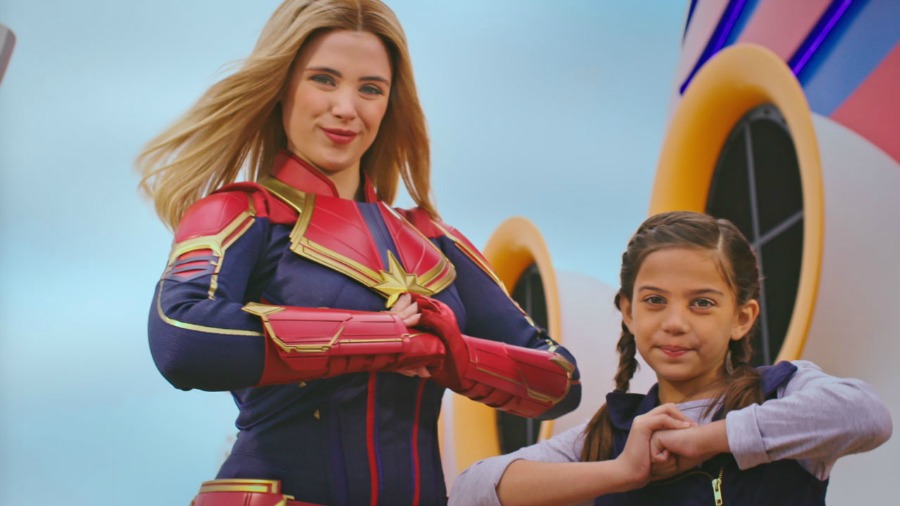 ShareTweetSubscribe
Disney has shared the look of the Captain Marvel character coming to Disney Parks and Disney Cruise Line in a newly-released video. They've also announced new merchandise offerings coming to the Disney theme parks, shopDisney, and at Disney Store retail locations ahead of Captain Marvel’s U.S. debut on International Women’s Day, March 8, 2019. As a reminder, beginning on next week's Marvel Day at Sea sailing aboard Disney Cruise Line, Captain Marvel will appear for meet and greets and other special experiences that we shared with you in this article. In keeping up with the Disney Walls trend, guests will soon be able to "strike their most empowering pose and snap postworthy photos in front of walls at select Disney locations with the hashtag #HigherFurtherFaster and share them across social media." Captain Marvel products are beginning to surface at various retail locations today, so be on the lookout for items from Hasbro, Funko, LEGO, Invicta, Stance, Diff, Bioworld, Fast Forward, Her Universe, Jaya, C-Life, and Mad Engine. Fans will find exclusive Captain Marvel toys, apparel and more at shopDisney with more products coming to Disney Store retail locations in February.

Disney and Marvel Publishing will also be offering official tie-in material to provide fans some backstory to the film, and Captain Marvel will fly into Marvel games for a special month-long in-game event kicking off in February across Marvel’s console, mobile, and PC games.

Take a peek at the video below for your first look and to see what the #HigherFurtherFaster movement is all about. Source: Disney Parks Blog
ShareTweetSubscribe