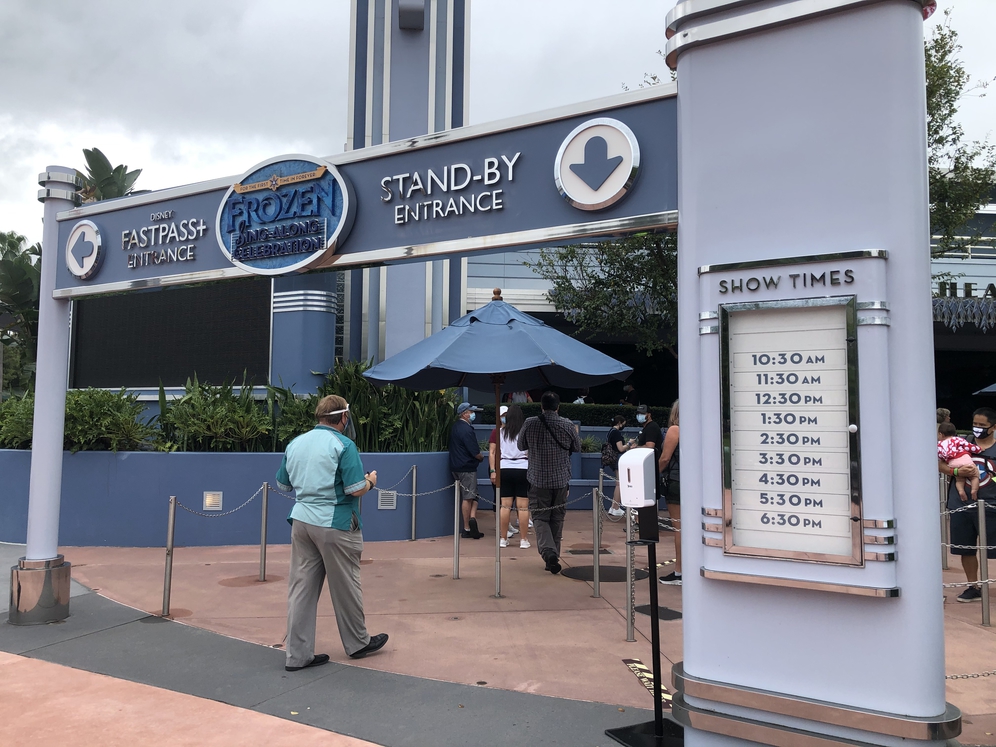 For the First Time in Forever: A Frozen Sing-Along Celebration made its return to Disney’s Hollywood Studios this morning. As we recently reported, Disney announced that the show would again resume, but with physical distancing and safety measures in place. Let’s take a peek at the new experience that’s now taking place 9 times daily.

Safety measures can be readily seen as guests approach the Hyperion Theater. Safety markers are present throughout the queue in order to promote physical distancing.

Guests in the pre-show outdoor lobby are asked to stand on dots. The theater doors are opened ten minutes before show time.

Guests are seated by cast members in groups with several seats in between parties.

Guests must wear facial coverings while attending the sing-along, and are still encouraged to join Arendelle historians, Erik and Aria, as they sing their way through the story of Anna and Elsa’s adventures.

In fact, Erik and Aria mention facial coverings in a light-hearted way three times during the performance, with Erik telling Elsa at the end what a great job we did with wearing them.

As we were told by Disney in the announcement regarding the return of the stage show, in large part, the show is the same as it was before the temporary closure due to the COVID-19 pandemic. And don’t worry: snow still falls at the end of the show.

An announcement is played after the last song that asks guests to remain seated until a cast member comes to dismiss their row.

For the First Time in Forever: A Frozen Sing-Along Celebration marks the first large stage show to return after reopening that utilizes Actors’ Equity performers. You may remember that Disney and Actors Equity had ongoing discussions regarding the accessibility to COVID-19 testing for their performers. A testing site has been established on Maingate Lane in Kissimmee for cast members and community members alike.