I Unapologetically Loved D23. Here’s Why. 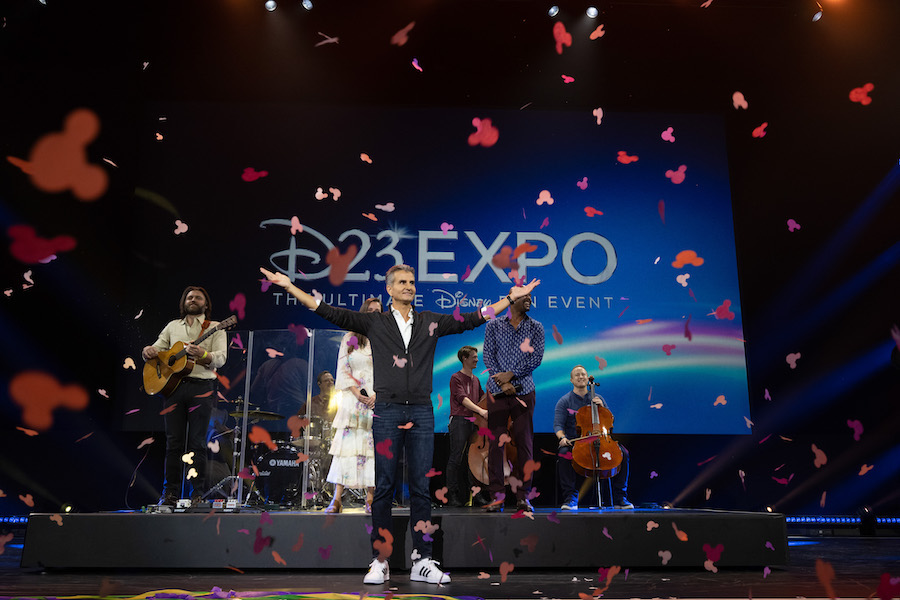 It’s easy to find things to complain about; No new gate announcements, not knowing what size Figment will be, Chapek thinking that beard will soften his slimy smile. But the truth is, we actually have a lot to be grateful for here, and I think some Disney fans are being a little harsh.

It’s been three years since we saw a traditional D23 Convention; the last one was held in August of 2019 before we knew what the world had in store for us. The return of the Ultimate Disney Fan Expo is something I, for one, am celebrating, regardless of what news it held for us. It’s one step closer to the world that I knew beforehand.

We are coming off the back of a few hard years as a human race. Entire blocks of time have been stolen from us, from our family time, school lives, and careers; everything came to a screaming halt, and when it finally resumed, every procedure we knew had turned upside down. Whether you want to slap a silly Disney Apologist label on it or not, the same thing happened to companies like Disney.

Put the hit business, in general, has taken aside from a moment. I’ve spent my time locked in Australia building a house, just a standard family home, nothing fancy, and I can promise you, nothing has gone to plan. My seven-month build that we started before everything shut down has been hit with three years of material shortages, lockdowns, lack of tradespeople to do the work, and international freight delays for months on end. Everything you can think of. No doubt, the same has occurred for anyone else working with any sort of construction without the exception of Disney. That’s why seeing D23 go ahead and the innovation that has been achieved – shown to us live on stage – is progress to me.

Progress, not perfection. Sure I’ve enjoyed the days gone by when large construction projects like Star Wars: Galaxy’s Edge were announced, though the last three years have taught us to take a different approach. I like that Disney is setting achievable goals that are less likely to end up in the remember when they said filing system of incomplete projects.

We’ve seen movement on all fronts. We finally hear the completion expectations for projects like TRON and Tiana’s Bayou Adventure that were caught off guard by a changing climate thanks to the pandemic. We are celebrating new tweaks added to our favorite attractions like the Hatbox Ghost, new shops, and restaurants like Tiana’s Place. A new ship for Disney Cruise Line and new routes to the other side of the globe for the Wonder. A new nighttime spectacular for EPCOT and the return of a beloved old one for Magic Kingdom. Not to mention more movies and shows than you could have imagined.

I’ve seen a solid critical response from fans about the emphasis on Disney+ media; many are frustrated with the effort going into the entertainment platform instead of the parks. Though, when I think about it, for many of us that are struggling to travel the way we used to, the Disney+ platform is a way most of us stay connected to the stories of Disney that we love.

As much as I would enjoy some announcement of a new park gate or something more extravagant, I appreciate the effort going into entertainment. While it isn’t the main goal for many of us, don’t lose sight that it still has a purpose, and we will benefit from the ever-changing content. Bob Chapek said it surprisingly well in a recent interview with the Hollywood Reporter, where he said that they had ‘dramatically underestimated’ how much content they would need, and COVID provided the opportunity to start making changes.

“I would say we dramatically underestimated the hungry beast and how much content it needed to be fed.

Our viewers, our subscribers were asking for more, so we started diverting content that was originally intended for theaters before Disney+ was even envisioned.”

Again, not perfect, but progress in satisfying the demand of a vast market that is desperate for more.

This article isn’t an avenue to argue with anyone. Yes, ticket pricing has increased; you are getting less value for the monetary cost and all that. Though, if you isolate D23 for what it is, a publicity event that allows us to get a foot in the door and see what is to come, we’ve taken a massive step in the right direction. When I saw hundreds of complaints about the blue sky portion of Sunday’s presentation, I was genuinely sad to see so many fans jaded with negativity around simply sharing imagination for a moment. As though just for a few moments, that wasn’t enough.

No, it didn’t come with any promises, but we were allowed a glimpse into what might be to come in a way that made me feel excited again, a first in a really long time for me. As they spoke about Moana and Zootipia, my imagination ran away with it, thinking of all the beautiful things that might happen. I was reminded that this very feeling is what I have always relied on Disney for, a sense of hope, adventure, and excitement for the future. A place to dream.

When I was younger, I remember hearing rumors about the Disneyland parking lot being turned into a second park. It was crazy and unimaginable, but the excitement of it was endless. Not long after, that pavement became Disneyland’s California Adventure. In this very location, 21 years later, D23 announced they are expanding Avenger’s Campus and reimagining Pacific Wharf into San Fransokyo from Big Hero 6. The updates themselves are exciting, but picturing the foundation where they sit still fills me with a sense of wonder in what was once no more than a place to park. I can’t help but smile.

The new world has left us always wanting more, never satisfied with where we are because that time stolen from us over the last few years can never be made up. Unlike from 1955 until 2019, when they did all the heavy lifting when it came to providing the magic, Disney will now forever be only what we make it. Now, they might provide the ingredients, but we need to stir them up. Personally, D23 was precisely what I needed to feel that swelling sensation of joy for what’s yet to come.

Now, sure, you might remember me having a slight tantrum a few weeks back about a comment that referred to us as Legacy Fans. I maintain that was an unnecessary move that dismissively singled out a large portion of the market for no purpose at all, but I would be lying if I said that D23 didn’t restore some of the enchantment for me.

If you had to pick the most positive announcement to come from D23, what would it be? I challenge you to find some essence of magic in what they have presented. I promise it won’t hurt and won’t signify that you morally accept any of the price increases, but it may just help you remember what you loved about Disney in the first place; if you let it.