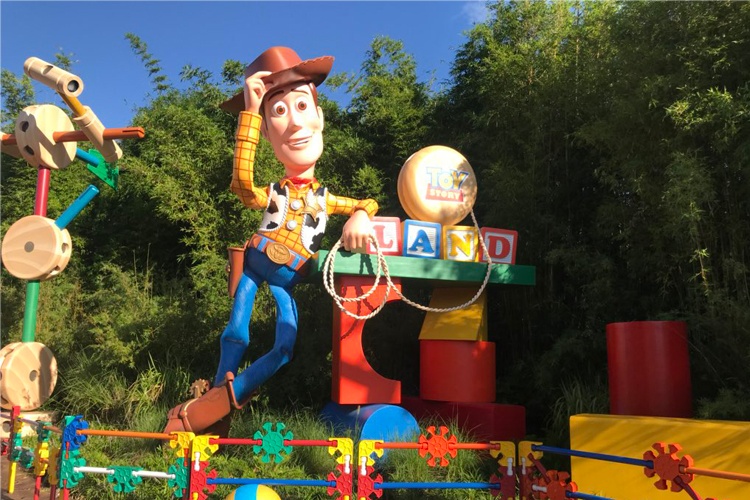 On Thursday, June 28 members of the media, including The DIS, were invited to explore Toy Story Land, which opens to the public two days later on June 30 at Disney’s Hollywood Studios. During this media event, we had the chance to ride the two new attractions — Slinky Dog Dash and Alien Swirling Saucers, walk around the land, and see some of the new merchandise that will be available for purchase.

This land is certainly geared towards families, so I was concerned adult guests would feel underwhelmed by the brand new expansion. That simply isn’t the case. This land is so brilliantly themed and immersive that it really can be enjoyed by everyone in the family, regardless of age.

The theming elements include everything from massive Toy Story character figures, down to small touches. My favorite theming element was Andy’s sneaker footprints throughout the land, as it immediately reminded me that in this land we as guests have been shrunken down to the size of a toy. Having that sense of scale when you see an enormous shoe print really sets the scene for the rest of the land. These are the small details — or not so small in this case — that make the Disney Parks so special.

Disney prides themselves on their attention to detail, and overall I think they did an excellent job with Toy Story Land. I really wasn’t anticipating it feeling as immersive as it did. Wow! Slinky Dog Dash really makes Toy Story Land into an expansion that guests can rightfully be excited about. I wish I could have ridden Slinky Dog Dash over and over again. While it certainly isn’t going to knock your socks off in terms of how thrilling it is, it is still very amusing and well worth waiting in line for. It is important to recognize that this ride was never intended to be a coaster as intense as Expedition Everest. Some were more critical, but I thought this was a great family coaster. I really enjoyed how smooth the track was. For my full review of Slinky Dog Dash click HERE! Alien Swirling Saucers is catered towards and will be enjoyed by kids. Many have compared this ride to Mater’s Junkyard Jamboree. I enjoyed this ride a lot more than I thought I was going to. That being said, for a lot of adult guests this is going to be something they ride once or twice, and then never really feel the need to ride again. As long as you recognize that this ride is meant to fill the void of family-friendly attractions at Disney’s Hollywood Studios, then you can appreciate it for what it is. For my full review of Alien Swirling Saucers click HERE! Disappointingly, Woody’s Lunch Box was not open for the entire media preview. We were planning on giving you a brief review of the food and overall experience, but we sadly weren’t afforded that chance. I was looking forward to trying the Monte Cristo sandwich, so I will be back as soon as possible to try it. Look out for that review in the near future!

Towards the end of the night, they did bring out sample sizes of the BBQ Brisket Melt and the Grilled Three-Cheese Sandwich. Both were absolutely incredible, but really giving them a fair review isn’t possible with how small the portion sizes were.

If it wasn’t clear by the picture above, it is very apparent in person that Woody’s Lunch Box is sponsored by Babybel Cheese; the logo and giant versions of the cheese are found throughout this area of the land. The seating area for Woody’s Lunch Box is very cute; some of the chairs and tables look like Andy took his K’nex toys, some cardboard, and tape to create a spot for his toys to sit. Attention to detail and good theming like this is what makes Toy Story Land enjoyable for guests of all ages. The entrance for Toy Story Mania has officially been shifted from Pixar Place to Toy Story Land. While the ride itself hasn’t changed, there have been several modifications to the queue including the addition of a talking Mr. Potato Head audio-animatronic. Mr. Potato Head sings, jokes, and even interacts with guests standing in line. While this isn’t revolutionary by any means, it will be appreciated by bored guests standing in a long line. The ride’s signage has also dropped the Midway from its original name, Toy Story Midway Mania! There are going to be many Disney Parks fans that walk away from Toy Story Land with empty wallets. Disney was smart to take advantage of this opportunity by creating a ton of land-specific merchandise, which guests will eat right up.

I think there is room for Disney to grow and expand with their merchandise options in Toy Story Land, and I was really surprised that there was no indoor gift shop in the entire land. For my full review of the Toy Story Land Merchandise click HERE!

To be completely honest, I walked in with low expectations of Toy Story Land. My assumptions of what this land was going to be like, and how it actually felt, were completely different. I shouldn’t have been so critical before I gave this land a chance.

Like I mentioned above, the clear star of Toy Story Land is Slinky Dog Dash. I foresee this being the must-have FastPass reservation until Star Wars: Galaxy’s Edge opens in late 2019.

Certainly, this land isn’t perfect. The biggest problem is the lack of shade and indoor air-conditioned locations. During the media day it got up to 93 degrees and Toy Story Land felt like the surface of the Sun. Waiting in line for these attractions is not going to be fun in the middle of the summer heat. During the media event there were several fans out, but at the very least they need to add several umbrellas or awnings to escape the heat.

Toy Story Land officially opens for guests starting tomorrow, June 30, and after experiencing it on Thursday night I cannot wait to hear what everyone else thinks!