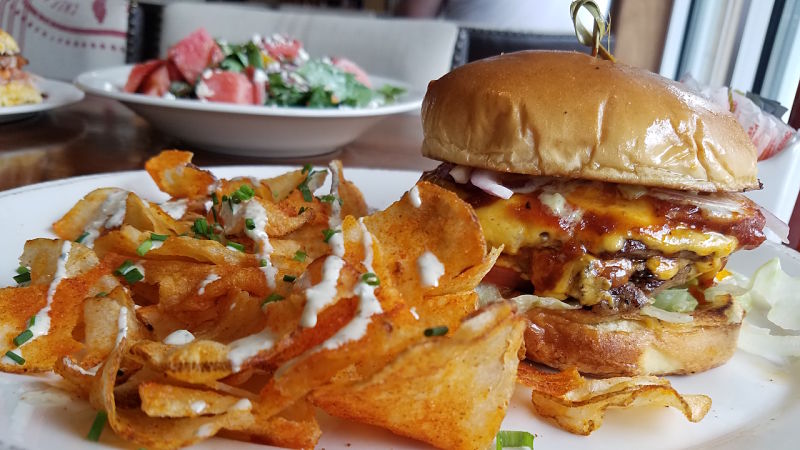 This summer, Walt Disney World has enhanced many of their dining experiences with updates and changes that you may be excited to hear about. Many of them have taken place at Disney Springs, but we wanted to update you on everything all in one place!

First, there are a couple limited time offerings at the Magic Kingdom that you might be interested in, including a Jalapeño-Cheddar Pretzel that can be found at the Lunching Pad. Also in the Magic Kingdom for a limited time is a Cheeseburger Hotdog, which can be found at none-other than Casey’s Corner. The unique hotdog is topped with “ground beef, caramelized onions, bacon and cheese sauce.”

The Magic Kingdom also has added some options to their menus that will seemingly be making a more permanent stay. For example, Westward Ho! Refreshments in Frontierland will offer a breakfast sandwich on a multigrain croissant topped with  “bacon, egg, cheddar and pepper jack cheese.” Prince Eric’s Village Market will also be adding a Pretzel Royale, which apparently is great for sharing.

For breakfast, Epcot’s Sunshine Seasons has just added the “new Vanilla and Flaxseed Overnight Oats with blueberries and pecans.”

The Highway in the Sky Dine Around, the monorail hotel dining tour, has just added more dates. Be sure to check if any dates are available for a reservation as soon as possible if you are interested, because these reservations are filled quickly.

Over at Dockside Margaritas there is more shade as the waterfront bar has added more umbrellas. Additionally, some seasonal frozen margaritas are rotating in and out of the bar including “watermelon, apple, agave nectar and tangerine.”

As the summer heats up, Splitsville Luxury Lanes has added more enclosed space and a new bar on their second-floor balcony. The objective of this change was simply for more air-conditioning.

B.B. Wolf’s Sausage Co. kiosk has added a spicy new addition to their menu. The new Latin Dog is “topped with chipotle mayo, corn salsa and queso fundido.” The vegetarians out there can also try the “meatless Italian-style with peppers, onion and marinara.”

Chef Art Smith’s Homecomin’ has made a lot of changes to the menu! The Jasper Board is bigger, now comprised of “smoked fish dip, pimento cheese, shaved country and tasso hams and buttermilk crackers.” If the Jasper Board doesn’t sounds like your cup of tea, they have also added a new board called the “Ham, Ham & Jam” which is made up of “three Cheddar drop biscuits with ham, blackberry fig jam and pimento cheese.” Another new offering at Chef Art Smith’s Homecomin’ is a steak dish with grilled corn, tomato and lima beans. On top of that, Chef Art Smith has made a new secret sauce, and there are other new additions like a “watermelon salad with heirloom tomatoes, crispy ham, feta cheese and candied pecans.”

Happy hour at STK Orlando just got a new menu that is offered “every Monday through Friday from 4 to 6 p.m.” Beer and well drinks are reportedly as low as $4.